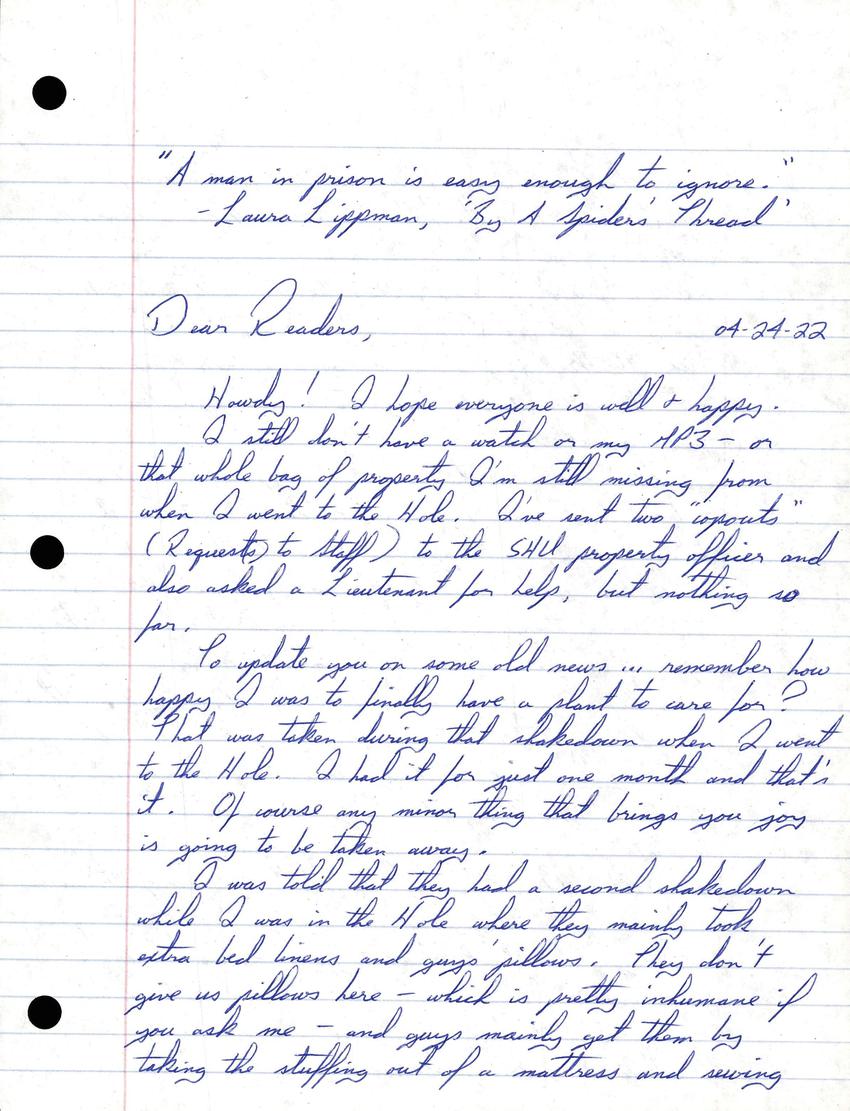 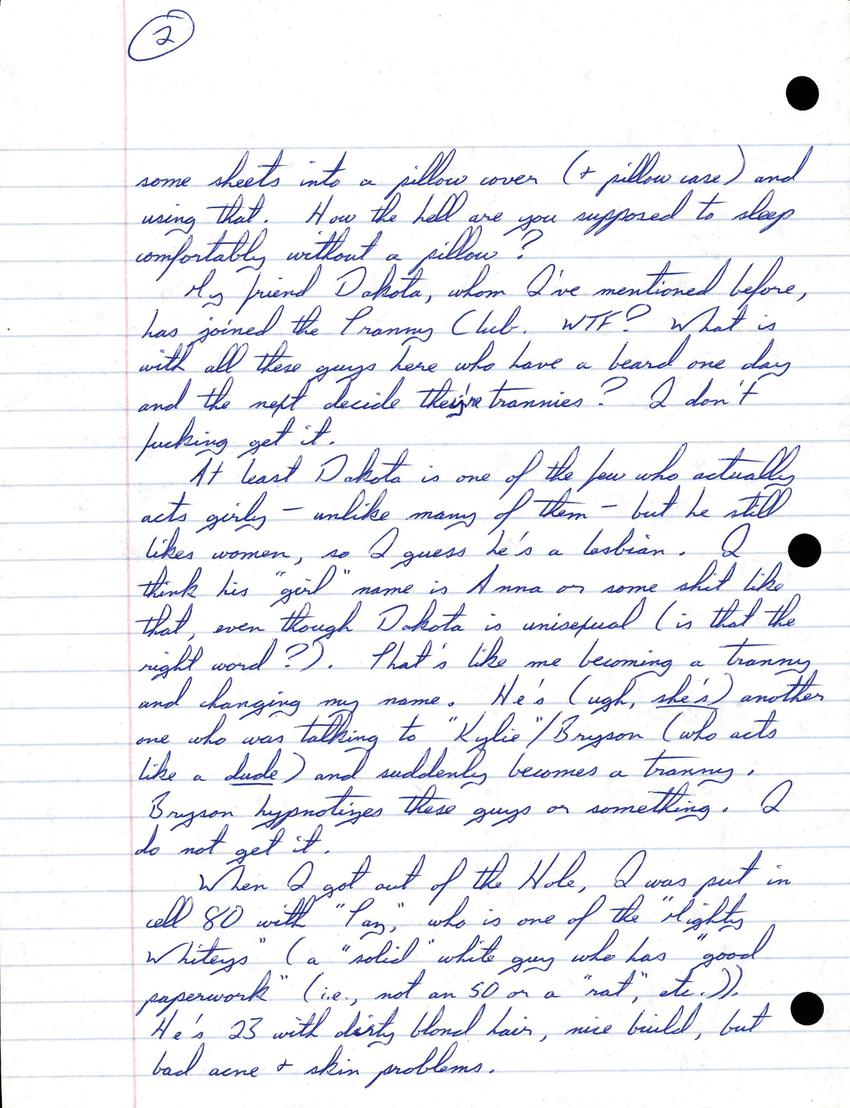 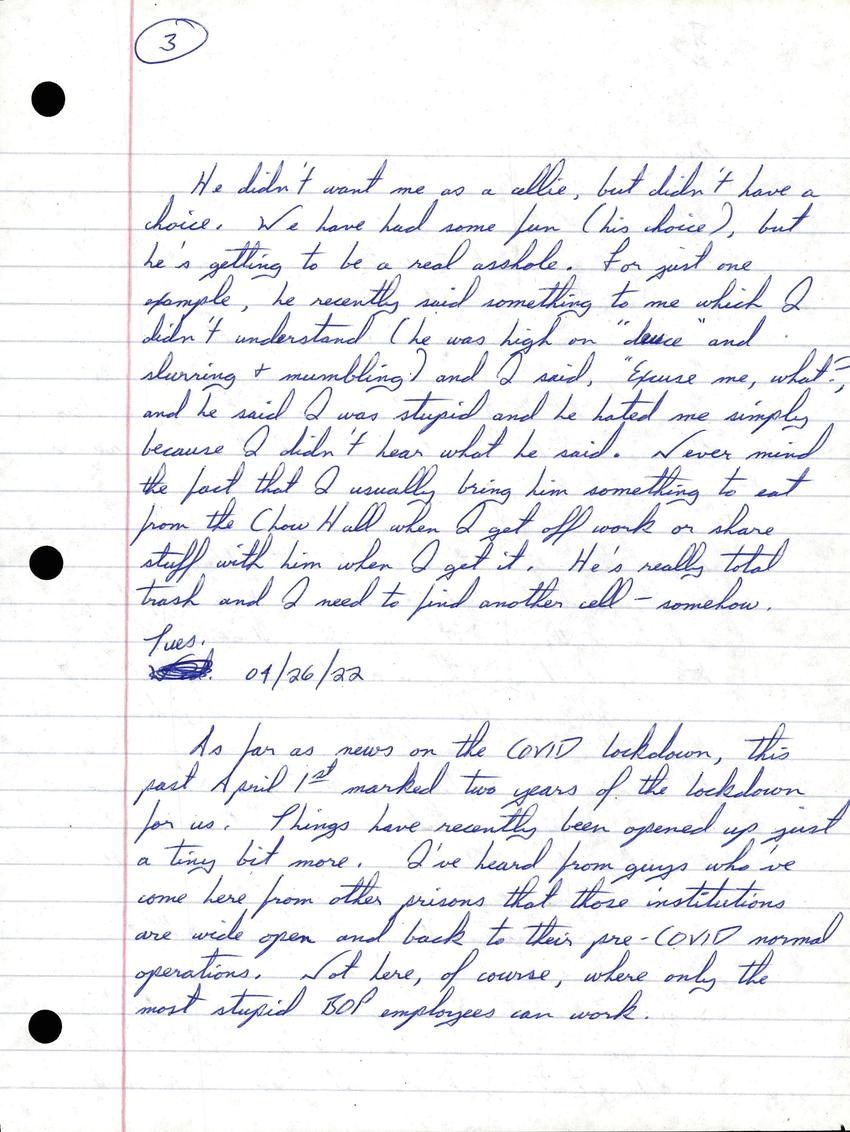 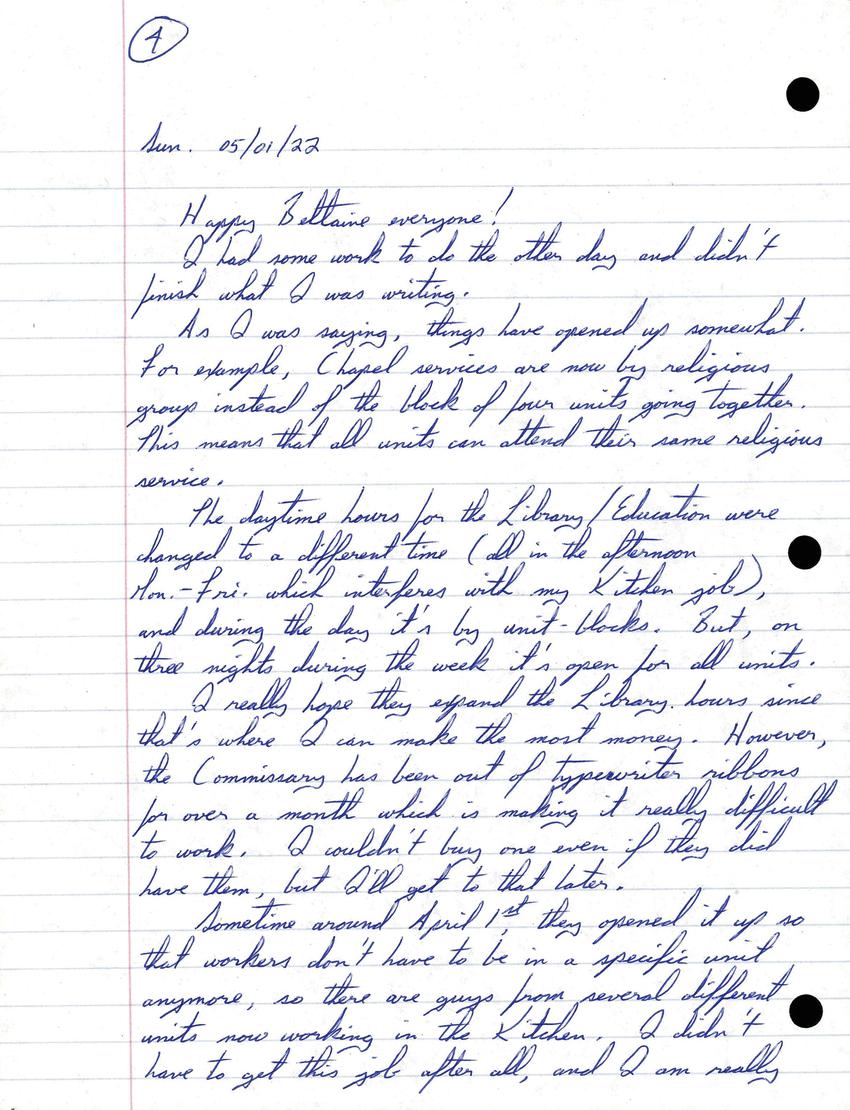 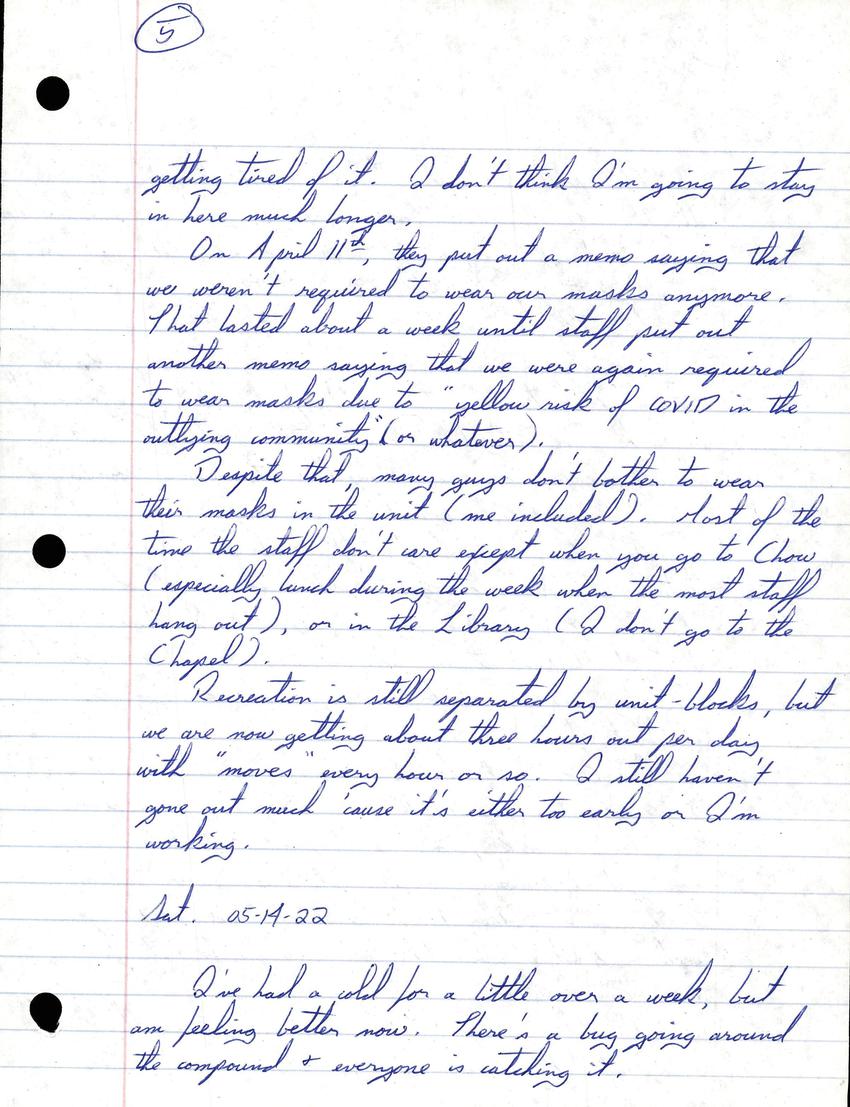 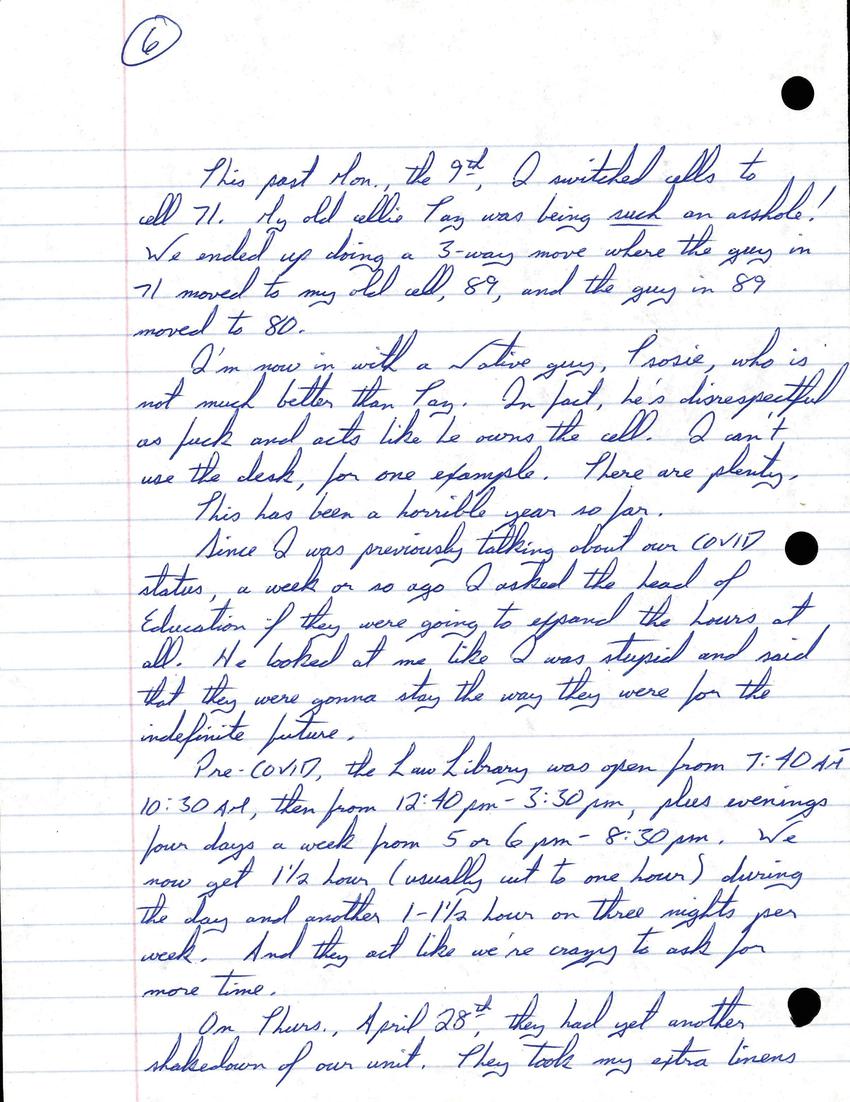 "A man in prison is easy enough to ignore"
- Laura Lippman, 'By a Spider's Thread'

Howdy! I hope everyone is well and happy. I still don't have a watch on my MP3 - or that whole bag of property I'm still missing from when I went to the Hold. I've sent to "copouts" (requests to staff) to the SHU property officer and also asked a Lieutenant for help, but nothing so far.

To update you on some old news...remember how happy I was to finally have a plant to care for? That was taken during that shakedown when I went to the Hole. I had it for just one month and that's it. Of course any minor thing that brings you joy is going to be taken away.

I was told that they had a second shakedown while I was in the Hole where they mainly took extra bed linens and guys' pillows. They don't give us pillows here - which is pretty inhumane if you ask me - and guys mainly get them by taking the stuffing out of a mattress and sewing some sheets into a pillow cover (+pillow case) and using that. How the hell are you supposed to sleep comfortably without a pillow?

My friend Dakota, whom I've mentioned before, has joined the Tranny Club. WTF? What is with all these guys here who have a beard one day and the next decide they're trannies? I don't fucking get it.

At least Dakota is one of the few who actually acts girly - unlike many of them - but he still likes women, so I guess he's a lesbian. I think his "girl" name is Anna or some shit like that even though Dakota is unisexual (is that the right word?). That's like me becoming a tranny and changing my name. He's (urg, she's) another one who was talking to "Kylie"/Bryson (who acts like a DUDE) and suddenly becomes a tranny. Bryson hypnotises these guys or something. I do not get it.

He didn't want me as an ally, but didn't have a choice. We have had some fun (his choice), but he's getting to be a real asshole. For just one example, he recently said something to me which I didn't understand (he was high on "deuce" and slurring and mumbling) and I said "Excuse me, what?" and he said I was stupid and he hated me simply because I didn't hear what he said. Never mind the fact that I usually bring him something to eat from the Chow Hall when I get off work or share stuff with him when I get it. He's really total trash and I need to find another cell - somehow.

As far as news on the COVID lockdown, this past April 1st marked two years of the lockdown for us. Things have recently been opened up just a tiny bit more. I've heard from guys who've come here from other prisons that those institutions are wide open and back to their pre-COVID normal operations. Not here, of course, where only the most stupid BOP employees can work.

I had some work to do the other day and didn't finish what I was writing.

As I was saying, things have opened up somewhat. For example, Chapel services are now by religious group instead of the block of four units going together. This means that all units can attend their same religious service.

The daytime hours for the Library/Education were changed to a different time (all in the afternoon Mon-Fri, which interferes with my Kitchen job), and during the day it's by unit-blocks. But, on three nights during the week it's open for all units.

I really hope they expand the Library hours since that's where I can make the most money. However, the Commissary has been out of typewriter ribbons for over a month which is making it really difficult to work. I couldn't buy one even if they did have them, but I'll get to that later.

Sometime around April 1st, they opened it up so that workers don't have to be in a specific unit anymore, so there are guys from several different units now working in the kitchen. I didn't have to get this job after all, and I am really getting tired of it. I don't think I'm going to stay in here much longer.

Despite that, many guys don't bother to wear their masks in the unit (me included). Most of the time the staff don't have one except when you go to Chow (especially lunch during the week when the most staff hang out), or in the Library (I don't go to the Chapel).

Recreation is still separated by unit-blocks, but we are now getting about three hours out per day with "moves" every hour or so. I still haven't gone out much 'cause it's either too early or I'm working.

I've had a cold for a little over a week, but am feeling better now. There's a bug going around the compound and everyone is catching it.

I'm now with a Native guy, [?], who is not much better than Ray. In fact, he's disrespectful as fuck and acts like he owns the cell. I can't use the desk, for one example. There are plenty.

This has been a horrible year so far.

Since I was previously talking about our COVID status, a week or so ago I asked the head of Education if they were going to expand the hours at all. He looked at me like I was stupid and said that they were gonna stay the way they were for the indefinite future.

On Thurs, April 28th, they had yet another shakedown of our unit. They took my extra linens and my pillow that I had bought just the previous month. It is really insane how they keep taking guys' pillows and expecting us to sleep on flat mattresses.

In more news...during the first week of May they decided to take all our jackets and even prohibit guys from wearing the thermal underwear they well at Commissary. The weekend right after that, we had a day or two with highs in the 50s and several days with lows in the 40s. But we're not allowed jackets.

Plus, it also happens to be hurricane season, so we're stuck without jackets every time it rains. But...the staff can still wear their jackets. Makes perfect sense, right?

BTW...I've included a copy of the "toiletries" we get in the Hole (SHU) (see previous posts). I'm not sure if you can read what I wrote since the copy's dark, but at the top left is one (of two) packs of toilet paper we get (containing 25 THIN squares of TP). On the right is the "spoon" we're required to use instead of plastic. Below that on the left is the new "toothbrush" they hand out compared to the old one on the bottom right. The new "toothbrush" didn't work well at all, it kept slipping off my finger and I almost choked on it several times.

The way they treat guys here is unconscionable.

Hey y'all. I'm back in the Kitchen, as usual, listening to "Everybody's Free (To Feel Good)" by Diane Williamson on C3PO.

What?! Yes, dear readers, I FINALLY got my watch and MP3 back from the SHU! They were delivered to the unit a week ago, on Wed. the 18th, two months and two days after I got our of the SHU. I am still missing that one bag of my property, which (hopefully) has my radio, book light, shoes, books and toiletries. Fucking insane.

Life with my latest cellie has been absolutely horrible, but I may save that for next time.

Instead...I'd like to end this with the latest insanity from the new Warden. He has started placing encumbrances on various inmates' accounts - including yours truly - seven when they haven't been found guilty of ANYTHING.

What this means is that our accounts are frozen and we are only allowed a $6 spending limit PER MONTH. (When I last got paid for my job - a whopping $27 for a month - they failed to freeze that. But when someone sent me money to my account to type their book, that was also frozen).

If you'll check out the Commissary sheet I posted some time ago, you'll see that I can't even buy a typewriter ribbon for only $6. (The're $7.75).

Plus we can't purchase "[?] minutes" which prevents me from emailing, and I can't access my account to send money out - which is preventing me from ordering the docket sheet for my case from the Court of Appeals so I can file a motion there (this is denial of access to courts).

As I said, he's not only going this to me, he's doing it to several inmates - most of whom haven't received an incident report, had a hearing, or been found guilty of anything! Among other things, this is a violation of due process because we're being punished without a hearing.

Some guys received this encumbrance because their cellies were caught with or found guilty of something. In my case, it's simply because I went to the Hole last February. However, my "shot" was thrown out - because there are hearing procedures - due process procedures - which were the reason for that. That doesn't give this psycho the right to punish guys who haven't been found guilty of anything.

Please support the enclosed Call to Action and stop this insane, power-hungry Warden from continuing to abuse his authority and inmates' rights!

[photo of small rubber brush to be placed on fingertip]

[photo of a small toothbrush]

Hi Kelly, thanks for your extensive update. I hope I've transcribed it accurately! I hope you are able to get your property back at least. I write this just after the summer solstice in the UK and send you many blessings.
(scanned reply – view as blog post)
uploaded Aug. 13, 2022.  Original (PDF) 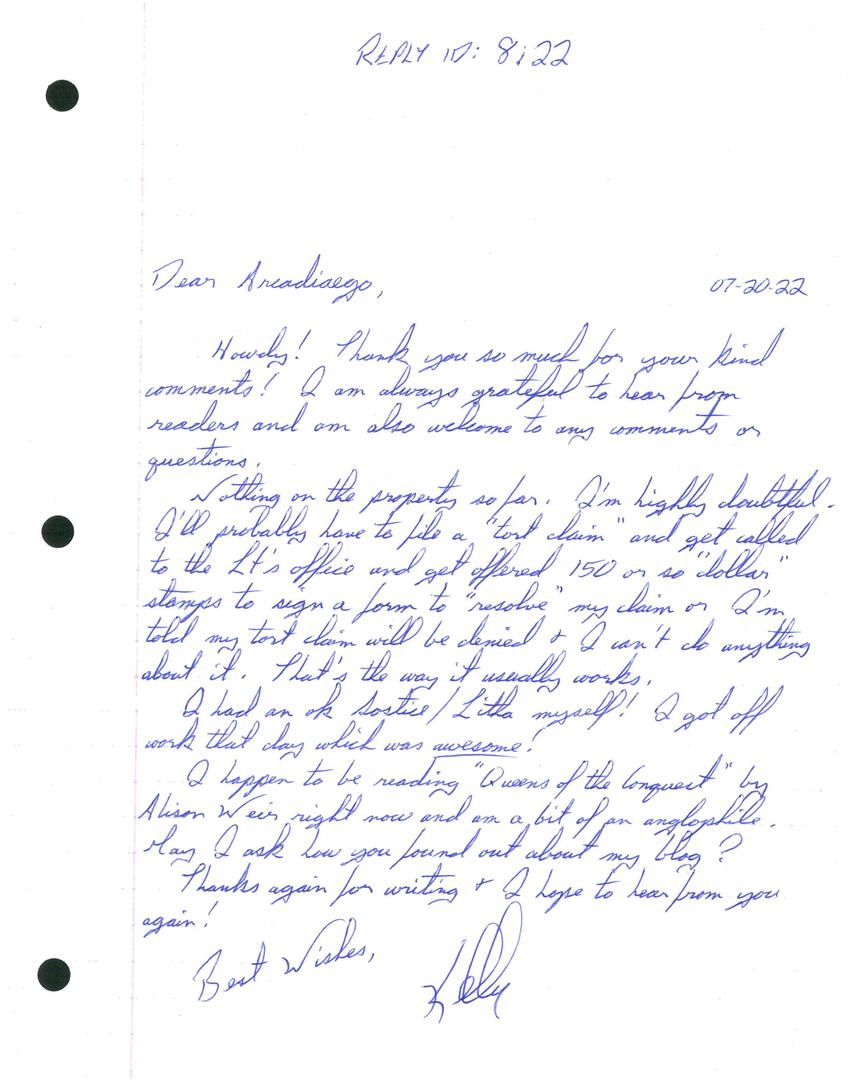