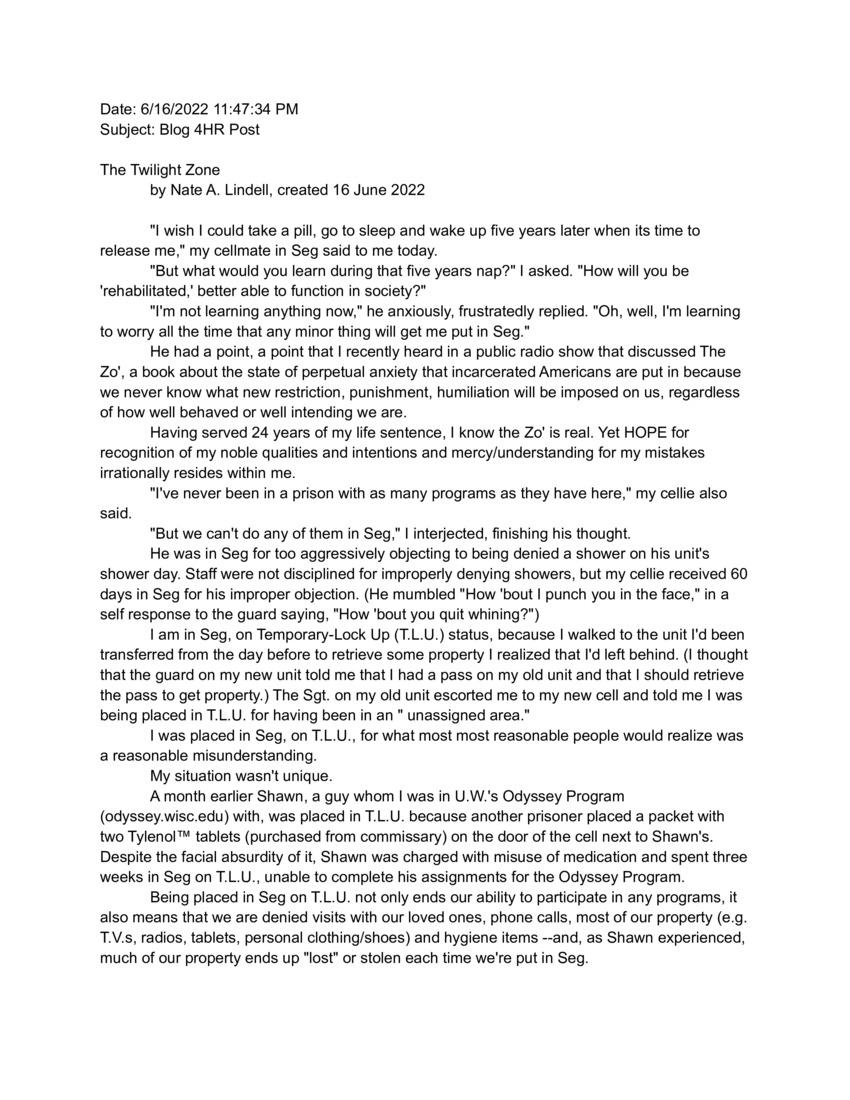 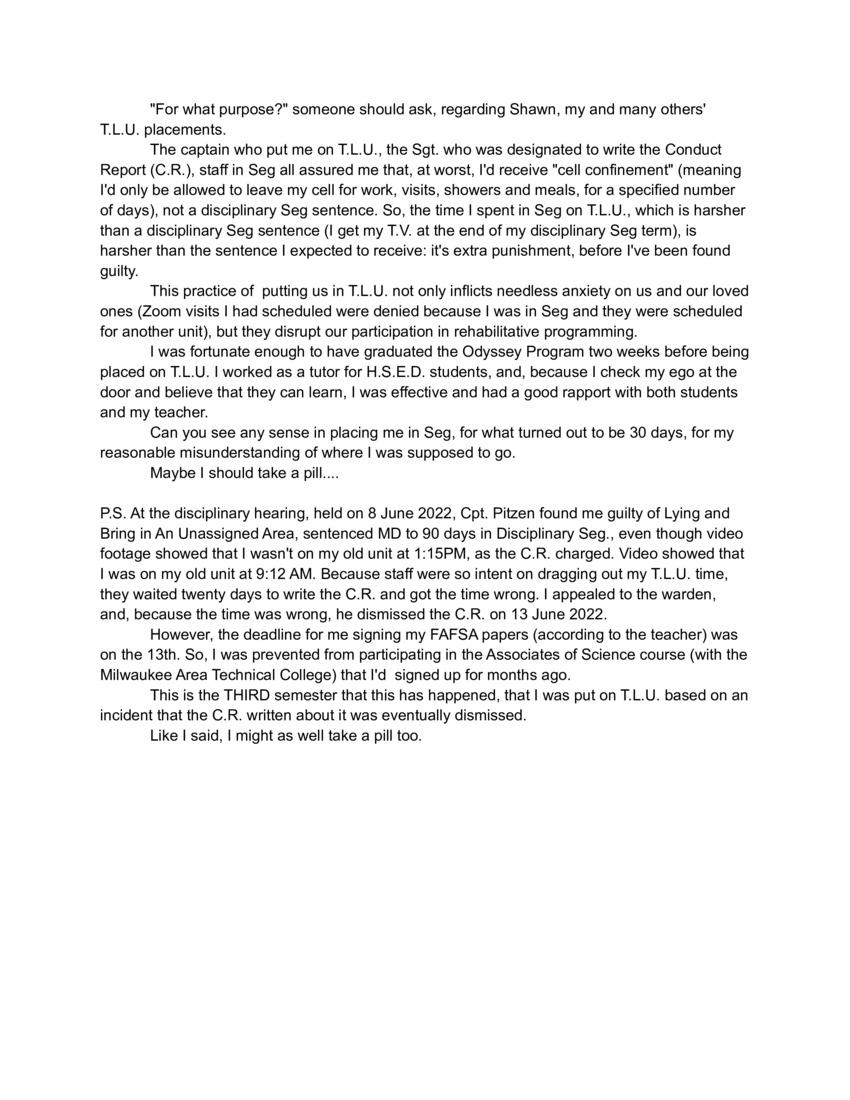 "I wish I could take a pill, go to sleep and wake up five years later when its time to release me," my cellmate in Seg said to me today.
"But what would you learn during that five years nap?" I asked. "How will you be 'rehabilitated,' better able to function in society?"
"I'm not learning anything now," he anxiously, frustratedly replied. "Oh, well, I'm learning to worry all the time that any minor thing will get me put in Seg."
He had a point, a point that I recently heard in a public radio show that discussed The Zo', a book about the state of perpetual anxiety that incarcerated Americans are put in because we never know what new restriction, punishment, humiliation will be imposed on us, regardless of how well behaved or well intending we are.
Having served 24 years of my life sentence, I know the Zo' is real. Yet HOPE for recognition of my noble qualities and intentions and mercy/understanding for my mistakes irrationally resides within me.
"I've never been in a prison with as many programs as they have here," my cellie also said.
"But we can't do any of them in Seg," I interjected, finishing his thought.
He was in Seg for too aggressively objecting to being denied a shower on his unit's shower day. Staff were not disciplined for improperly denying showers, but my cellie received 60 days in Seg for his improper objection. (He mumbled "How 'bout I punch you in the face," in a self response to the guard saying, "How 'bout you quit whining?")
I am in Seg, on Temporary-Lock Up (T.L.U.) status, because I walked to the unit I'd been transferred from the day before to retrieve some property I realized that I'd left behind. (I thought that the guard on my new unit told me that I had a pass on my old unit and that I should retrieve the pass to get property.) The Sgt. on my old unit escorted me to my new cell and told me I was being placed in T.L.U. for having been in an "unassigned area."
I was placed in Seg, on T.L.U., for what most most reasonable people would realize was a reasonable misunderstanding.
My situation wasn't unique.
A month earlier Shawn, a guy whom I was in U.W.'s Odyssey Program (odyssey.wisc.edu) with, was placed in T.L.U. because another prisoner placed a packet with two Tylenol tablets (purchased from commissary) on the door of the cell next to Shawn's. Despite the facial absurdity of it, Shawn was charged with misuse of medication and spent three weeks in Seg on T.L.U., unable to complete his assignments for the Odyssey Program.
Being placed in Seg on T.L.U. not only ends our ability to participate in any programs, it also means that we are denied visits with our loved ones, phone calls, most of our property (e.g. T.V.s, radios, tablets, personal clothing/shoes) and hygiene items --and, as Shawn experienced, much of our property ends up "lost" or stolen each time we're put in Seg.
"For what purpose?" someone should ask, regarding Shawn, my and many others' T.L.U. placements.
The captain who put me on T.L.U., the Sgt. who was designated to write the Conduct Report (C.R.), staff in Seg all assured me that, at worst, I'd receive "cell confinement" (meaning I'd only be allowed to leave my cell for work, visits, showers and meals, for a specified number of days), not a disciplinary Seg sentence. So, the time I spent in Seg on T.L.U., which is harsher than a disciplinary Seg sentence (I get my T.V. at the end of my disciplinary Seg term), is harsher than the sentence I expected to receive: it's extra punishment, before I've been found guilty.
This practice of putting us in T.L.U. not only inflicts needless anxiety on us and our loved ones (Zoom visits I had scheduled were denied because I was in Seg and they were scheduled for another unit), but they disrupt our participation in rehabilitative programming.
I was fortunate enough to have graduated the Odyssey Program two weeks before being placed on T.L.U. I worked as a tutor for H.S.E.D. students, and, because I check my ego at the door and believe that they can learn, I was effective and had a good rapport with both students and my teacher.
Can you see any sense in placing me in Seg, for what turned out to be 30 days, for my reasonable misunderstanding of where I was supposed to go.
Maybe I should take a pill....

P.S. At the disciplinary hearing, held on 8 June 2022, Cpt. Pitzen found me guilty of Lying and Bring in An Unassigned Area, sentenced MD to 90 days in Disciplinary Seg., even though video footage showed that I wasn't on my old unit at 1:15PM, as the C.R. charged. Video showed that I was on my old unit at 9:12 AM. Because staff were so intent on dragging out my T.L.U. time, they waited twenty days to write the C.R. and got the time wrong. I appealed to the warden, and, because the time was wrong, he dismissed the C.R. on 13 June 2022.
However, the deadline for me signing my FAFSA papers (according to the teacher) was on the 13th. So, I was prevented from participating in the Associates of Science course (with the Milwaukee Area Technical College) that I'd signed up for months ago.
This is the THIRD semester that this has happened, that I was put on T.L.U. based on an incident that the C.R. written about it was eventually dismissed.
Like I said, I might as well take a pill too.