We should care because ...? 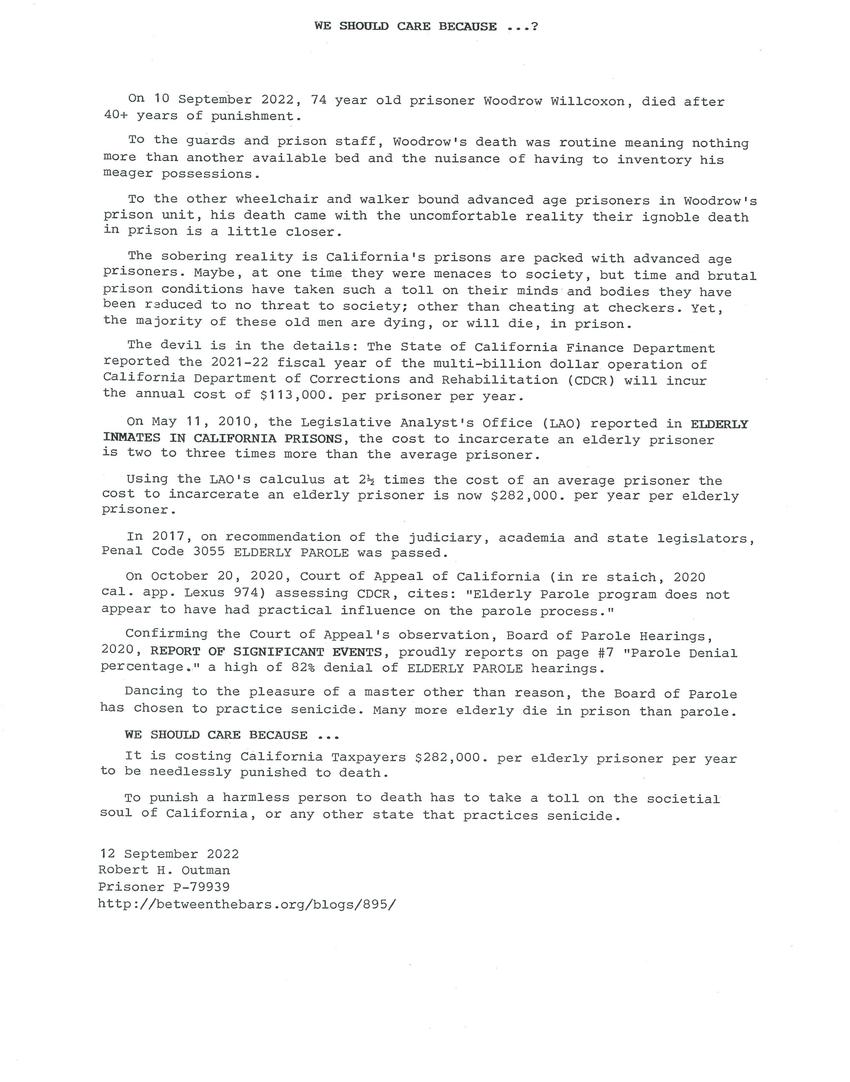 WE SHOULD CARE BECAUSE ...?

To the guards and prison staff, Woodrow's death was routine meaning nothing more than another available bed and the nuisance of having to inventory his meager possessions.

To the other wheelchair and walker bound advanced age prisoners in Woodrow's prison unit, his death came with the uncomfortable reality their ignoble death in prison is a little closer.

The sobering reality is California's prisons are packed with advanced age prisoners. Maybe, at one time they were menaces to society, but time and brutal prison conditions have taken such a toll on their minds and bodies they have been reduced to no threat to society; other than cheating at checkers. Yet, the majority of these old men are dying, or will die, in prison.

The devil is in the details: The State of California Finance Department reported the 2021-22 fiscal year of the multi-billion dollar operation of California Department of Corrections and Rehabilitation (cdcr) WILL INCUR THE ANNUAL COST OF $113,000. per prisoner per year.

On May 11, 2010, the Legislative Analyst's Office (LAO) reported in ELDERLY INMATES IN CALIFORNIA PRISONS, the cost to incarcerate an elderly prisoner is two to three times more than the average prisoner.

In 2017, on recommendation of the judiciary, academia and state legislators, Penal Code 3055 ELDERLY PAROLE was passed.

On October 20, 2020, Court of Appeal of California (in re staich, 2020 cal. app. Lexus 974) assessing CDCR, cites: "Elderly Parole program dos not appear to have had practical influence on the parole process."

Confirming the Court of Appeal's observation, Board of Parole's Hearings, 2020, REPORT ON SIGNIFICANT EVENTS, proudly reports on page #7 "Parole Denial percentage." a high of 82% denial of ELDERLY PAROLE hearings.

Dancing to the pleasure of a master other than reason, the Board of Parole has chosen to practice senicide. Many more elderly die in prison than parole.

WE SHOULD CARE BECAUSE ...

It is costing California Taxpayers $282,000. per elderly prisoner per year to be needlessly punished to death.

To punish a harmless person to death has to take a toll on the societal soul of California, or any other state that practices senicide.

As a man who has sat with the dying, I can attest to the emotional strain the experience of death brings to the living. In an infirmary situation, there is often the mentally-ill, housed with the infirm and those suffering from disease, creating a situation of chaos and noise. A sense of reverence or humility is impossible and sometimes the unthinkable happens, inmate-on-inmate human cruelty or inhumane staff treatment.

On September 29, 2022 Governor Gavin Newsom signed Assembly Bill 960. Assembly Bill 960 would expand eligibility for compassionate release, streamline the approval process, and automatically provide legal counsel for the infirm and dying. The bill changes the eligibility standard for release from the number of months that someone has left, to a wider standard: the of having an incurable condition or an “end-of-life” trajectory. Furthermore, the bill speeds the timeline for compassionate release, requiring the CDCR to refer a case to the courts no more than 45 days after the patient’s physician triggers the compassionate release process. It also changes the standard for the courts in favor of that release, unless the patient can be deemed a risk to public safety. Importantly, the bill removes completely the CDCR secretary from the approval process altogether, an impediment to an extremely high percentage of denials in the past few years.

Each U.S. State should be so blessed as to have such considerate legislation.

This bill was signed after your posting Robert. I can pray that your physician's inside will understand and facilitate the compassionate release of those you point to as worthy of the same. It is time for Americans to stand for what is right and question the prison state that is paid by taxpayer dollars. Moreover, "we should care," because as Christians and Americans, we stand for the dignity of human life which includes the right to die with dignity.