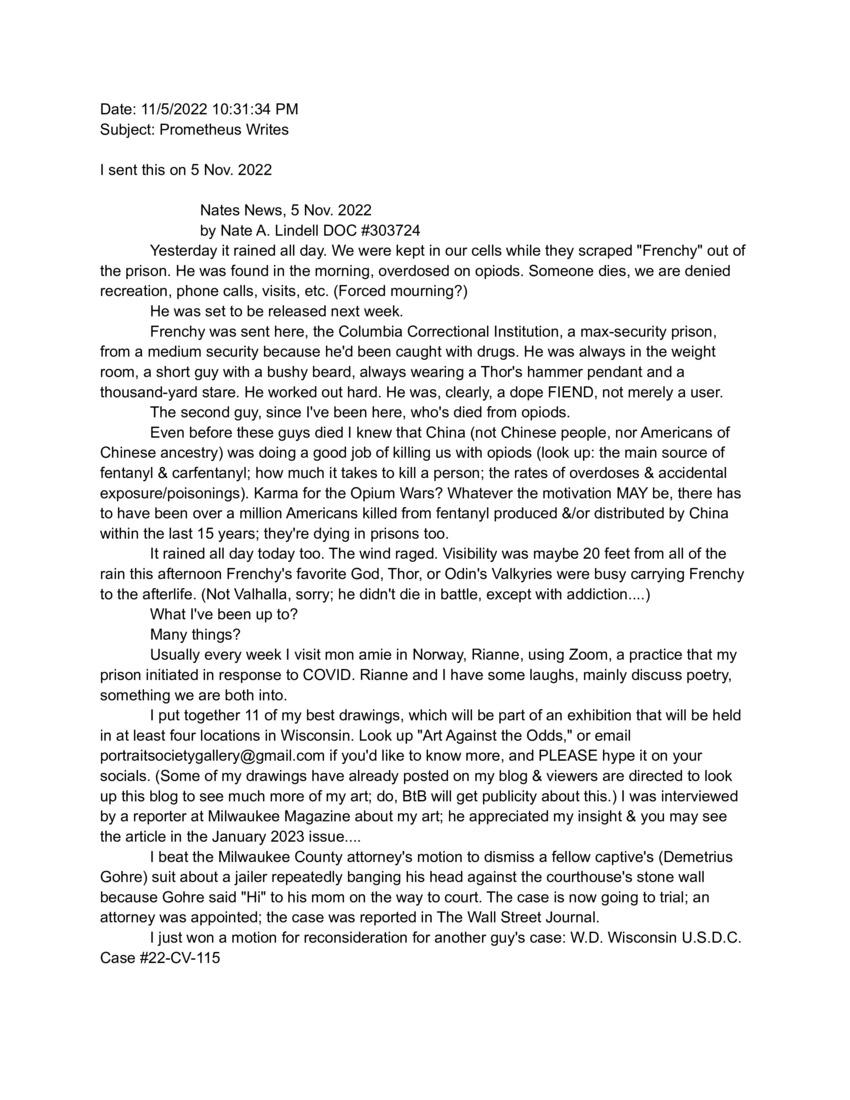 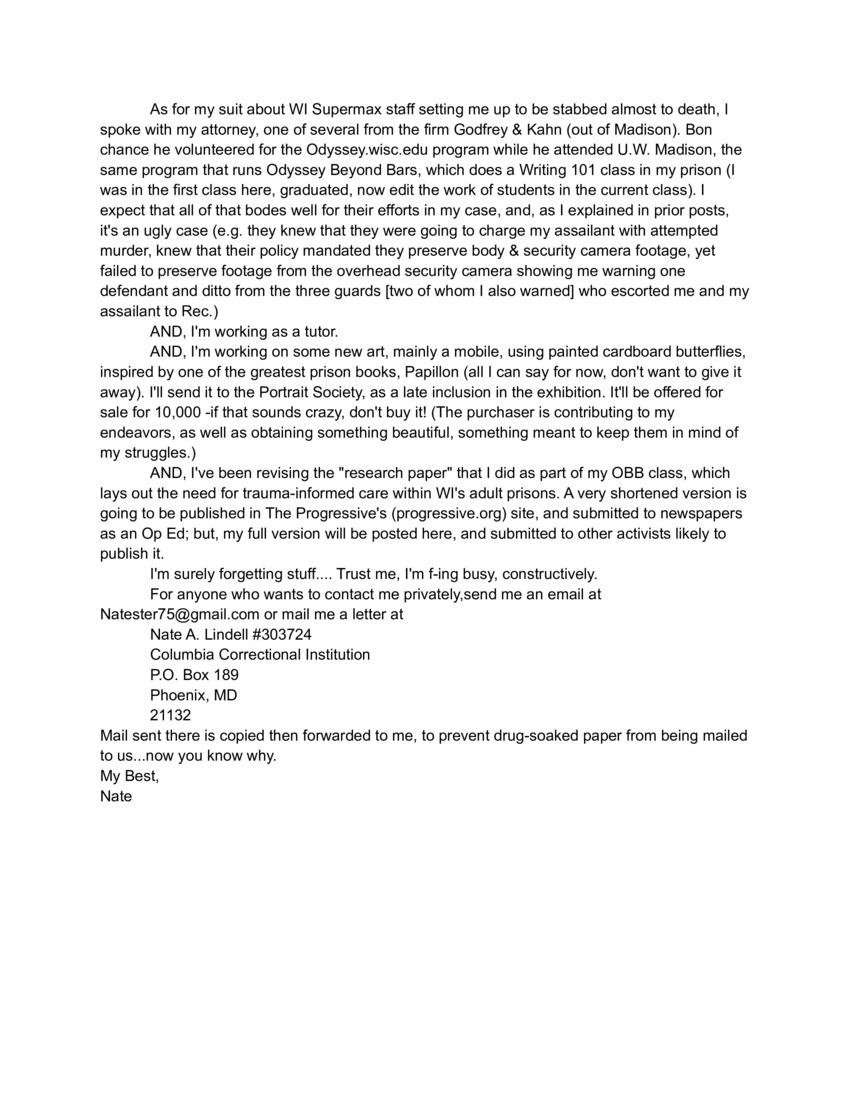 I sent this on 5 Nov. 2022
Nates News. 5 Nov. 2022
by Nate A. Lindell DOC #303724
Yesterday it rained all day. We were kept in our cells while they scraped "Frenchy" out of
the prison. He was found in the morning, overdosed on opiods. Someone dies, we are denied
recreation, phone calls, visits, etc. (Forced mourning?)
He was set to be released next week.
Frenchy was sent here, the Columbia Correctional Institution, a max-security prison,
from a medium security because he'd been caught with drugs. He was always in the weight
room, a short guy with a bushy beard, always wearing a Thor's hammer pendant and a
thousand-yard stare. He worked out hard. He was, clearly, a dope FIEND, not merely a user.
The second guy, since I've been here, who's died from opiods.
Even before these guys died I knew that China (not Chinese people, nor Americans of
Chinese ancestry) was doing a good job of killing us with opiods (look up: the main source of
fentanyl & carfentanyl; how much it takes to kill a person; the rates of overdoses & accidental
exposure/poisonings). Karma for the Opium Wars? Whatever the motivation MAY be, there has
to have been over a million Americans killed from fentanyl produced &/or distributed by China
within the last 15 years; they're dying in prisons too.
It rained all day today too. The wind raged. Visibility was maybe 20 feet from all of the
rain this afternoon Frenchy's favorite God, Thor, or Odin's Valkyries were busy carrying Frenchy
to the afterlife. (Not Valhalla, sorry; he didn't die in battle, except with addiction....)
What I've been up to?
Many things?
Usually every week I visit mon amie in Norway, Rianne, using Zoom, a practice that my
prison initiated in response to COVID. Rianne and I have some laughs, mainly discuss poetry,
something we are both into.
I put together 11 of my best drawings, which will be part of an exhibition that will be held
in at least four locations in Wisconsin. Look up "Art Against the Odds," or email
portraitsocietygallery@gmail.com if you'd like to know more, and PLEASE hype it on your
socials. (Some of my drawings have already posted on my blog & viewers are directed to look
up this blog to see much more of my art; do, BB will get publicity about this.) I was interviewed
by a reporter at Milwaukee Magazine about my art; he appreciated my insight & you may see
the article in the January 2023 issue..
I beat the Milwaukee County attorney's motion to dismiss a fellow captive's (Demetrius
Gore) suit about a jailer repeatedly banging his head against the courthouse's stone wall
because Gore said "Hi" to his mom on the way to court. The case is now going to trial; an
attorney was appointed; the case was reported in The Wall Street Journal.
I just won a motion for reconsideration for another guy's case: W.D. Wisconsin U.S.D.C.
Case #22-CV-115

As for my suit about WI Supermax staff setting me up to be stabbed almost to death, I
spoke with my attorney, one of several from the firm Godfrey & Kahn (out of Madison). Bon
chance he volunteered for the Odyssey.wisc.edu program while he attended U.W. Madison, the
same program that runs Odyssey Beyond Bars, which does a Writing 101 class in my prison (I
was in the first class here, graduated, now edit the work of students in the current class). I
expect that all of that bodes well for their efforts in my case, and, as I explained in prior posts,
it's an ugly case (e.g. they knew that they were going to charge my assailant with attempted
murder, knew that their policy mandated they preserve body & security camera footage, yet
failed to preserve footage from the overhead security camera showing me warning one
defendant and ditto from the three guards [two of whom I also warned] who escorted me and my
assailant to Rec.)
AND, I'm working as a tutor.
AND, I'm working on some new art, mainly a mobile, using painted cardboard butterflies,
inspired by one of the greatest prison books, Papillon (all I can say for now, don't want to give it
away). I'll send it to the Portrait Society, as a late inclusion in the exhibition. It'll be offered for
sale for 10,000 -if that sounds crazy, don't buy it! (The purchaser is contributing to my
endeavors, as well as obtaining something beautiful, something meant to keep them in mind of
my struggles.)
AND, I've been revising the "research paper" that I did as part of my OBB class, which
lays out the need for trauma-informed care within WI's adult prisons. A very shortened version is
going to be published in The Progressive's (progressive.org) site, and submitted to newspapers
as an Op Ed; but, my full version will be posted here, and submitted to other activists likely to
publish it.
I'm surely forgetting stuff.... Trust me, I'm f-ing busy, constructively.
For anyone who wants to contact me privately,send me an email at
Natester75@gmail.com or mail me a letter at
Nate A. Lindell #303724
Columbia Correctional Institution
PO. Box 189
Phoenix, MD
21132
Mail sent there is copied then forwarded to me, to prevent drug-soaked paper from being mailed
to us…now you know why.
My Best.
Nate

Hi Nate!!!
This is Susana, from Spain. Remember our letters? Loooong time ago, maybe 7-8 years. Hopefully you read this message. My English is still very rusty 😊
Hope to hear from you!