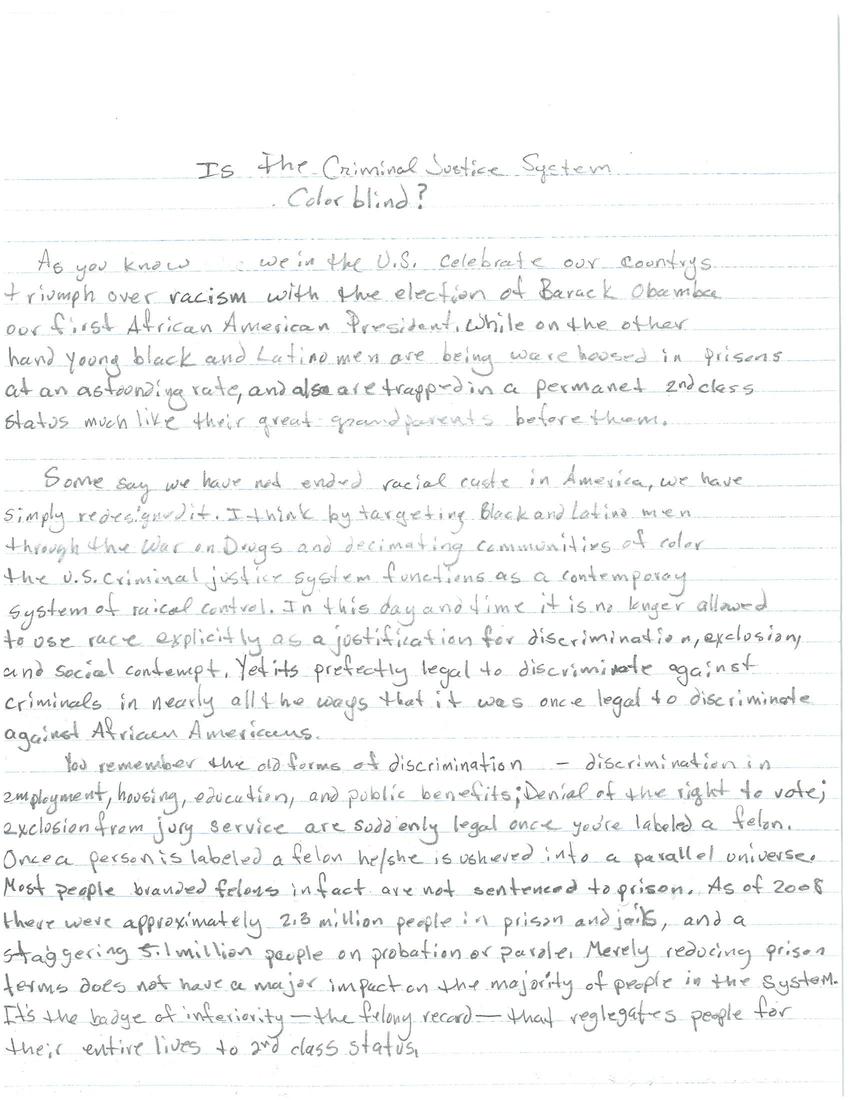 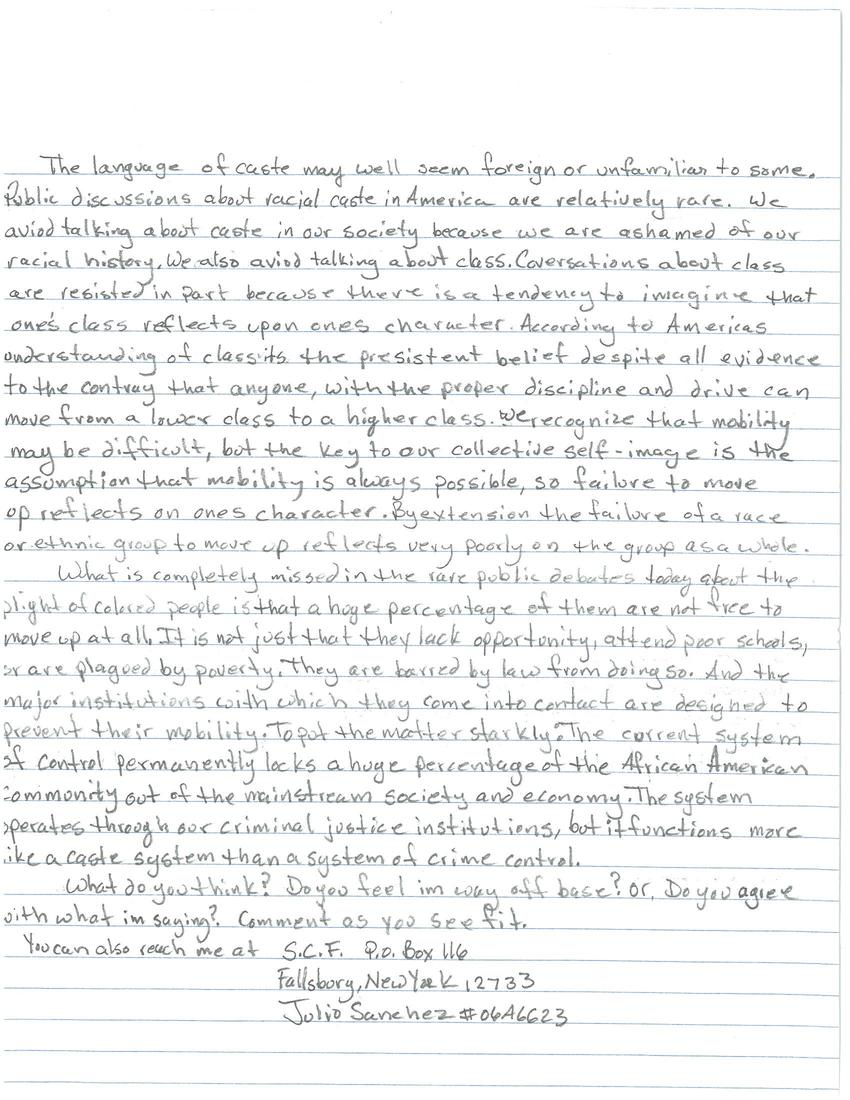 As you know, we in the U.S. celebrate our country's triumph over racism with the election of Barack Obama, our first African American President. While on the other hand, young Black and Latino men are being warehoused in prisons at an astonishing rate, and are being trapped in a permanent 2nd class status, much like their great-grandparents before them.

Some say we have not ended racial caste in America, we have simply redesigned it. I think by targeting Black and Latino men through the war on Drugs and discriminating communities of colour in the U.S. criminal justice system functions as a contemporary system of racial control. In this day and time it is no longer allowed to use race explicitly as a justification for discrimination, exclusion, and social contempt. Yet it's perfectly legal to discriminate against criminals in nearly all the ways that it was once legal to discriminate against African Americans.

You remember the old forms of discrimination -discrimination in employment, housing, education, and public benefits; denial of the right to vote; exclusion from jury service, these are suddenly legal once you're labelled a felon. Once a person is labelled a felon he/she is ushered into a parallel universe. Most people branded felons in fact are not sentenced to prison. As of 2008, there were approximately 2.3 million people in prison and jails, and a staggering 5.1 million people on probation or parole. Merely reducing prison terms does not have a major impact on the majority of people in the system. It's the badge of inferiority -the felony record- that delegates people, for their entire lives, to 2nd class status.

The language of caste may well seem foreign or unfamiliar to some. Public discussions about racial caste in America are relatively rare. We avoid talking about caste in our society because we are ashamed of our racial history. We also avoid talking about class. Conversations about class are resisted in part because there is a tendency to imagine that one's class reflects upon one's character. According to America's understanding of class, it's the persistent belief, despite all evidence to the contrary, that anyone, with the proper discipline and drive can move from a lower class to a higher class. We recognise that mobility may be difficult, but the key to our collective self-image is the assumption that mobility is always possible, so failure to move up reflects on one's character. By extension, the failure of a race or ethnic group to move up reflects very poorly on the group as a whole.

What is completely missed in the rare public debates today about the plight of colored people is that a huge percentage of them are not free to move up at all. It is not just that they lack opportunity, attend poor schools, or are plagued by poverty. They are barred from doing so. And the major institutions with which they come into contact are designed to prevent their mobility. To put the matter starkly: the current system of control permanently lacks a huge percentage of the African American community out of the mainstream society and economy. The system separates through our criminal justice institutions, but it functions more like a caste system than a system of crime control.

Hi Julio,
I just finished the transcription for your post "Is the Criminal Justice System Color Blind" and I have to agree with you in that no, it definitely isn't. The American Dream? Well, it turns out you can only have that dream if you are white, male, and get really damned lucky. We always talk about opportunities and whatnot, that if you will work hard you will move up the ladder, but the reality of the matter is that you can only go so far. I don't think it's so much that there are divisions between social classes, but that determination will only get you so far. Eventually, some sort of discrimination (of race, or gender) will pull you down.

Many, many people are subject to racial discrimination every day, and I completely agree with you -as long as we don't talk about it, nothing can or will be done to change it. Racism and sexism are still abundant in the United States -as much as we would like to say otherwise, we haven't gotten rid of them yet. They are an ever-present issue (one that I feel strongly about, as you've probably noticed by now from the tone of this letter -it's great, I love writing, particularly on something this close to my heart).

On the front page of the Between the Bars website, it states that "1% of Americans... are in prison" and the continuation of that sentence is that a large portion of those people are people of color. That alone definitely does not mean that they have been a victim of discrimination (they may have, but it does not necessarily follow). There are people of every race and of every color that will do something "bad", be it on accident or intended, and it is up to the justice system to somehow quantify their actions in order to pass judgement. Unfortunately, someone's race can have an impact (sometimes big, sometimes small) on how their crime is quantified. 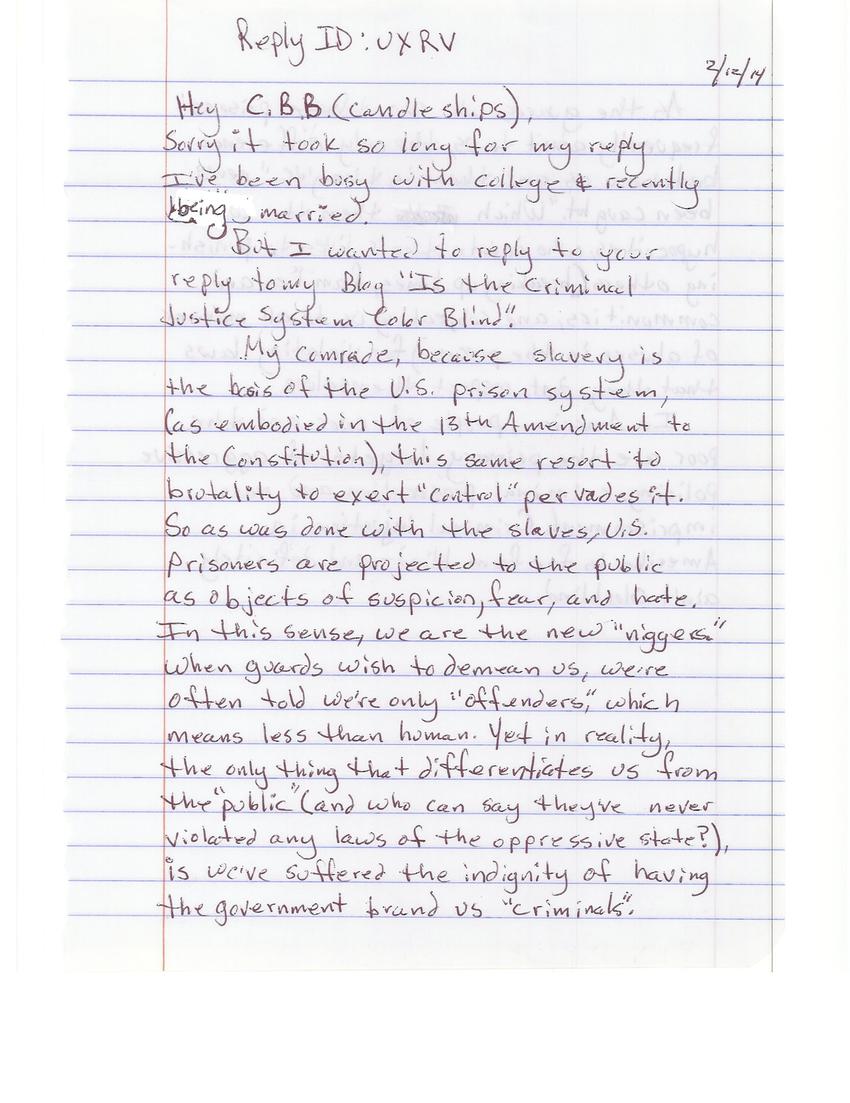 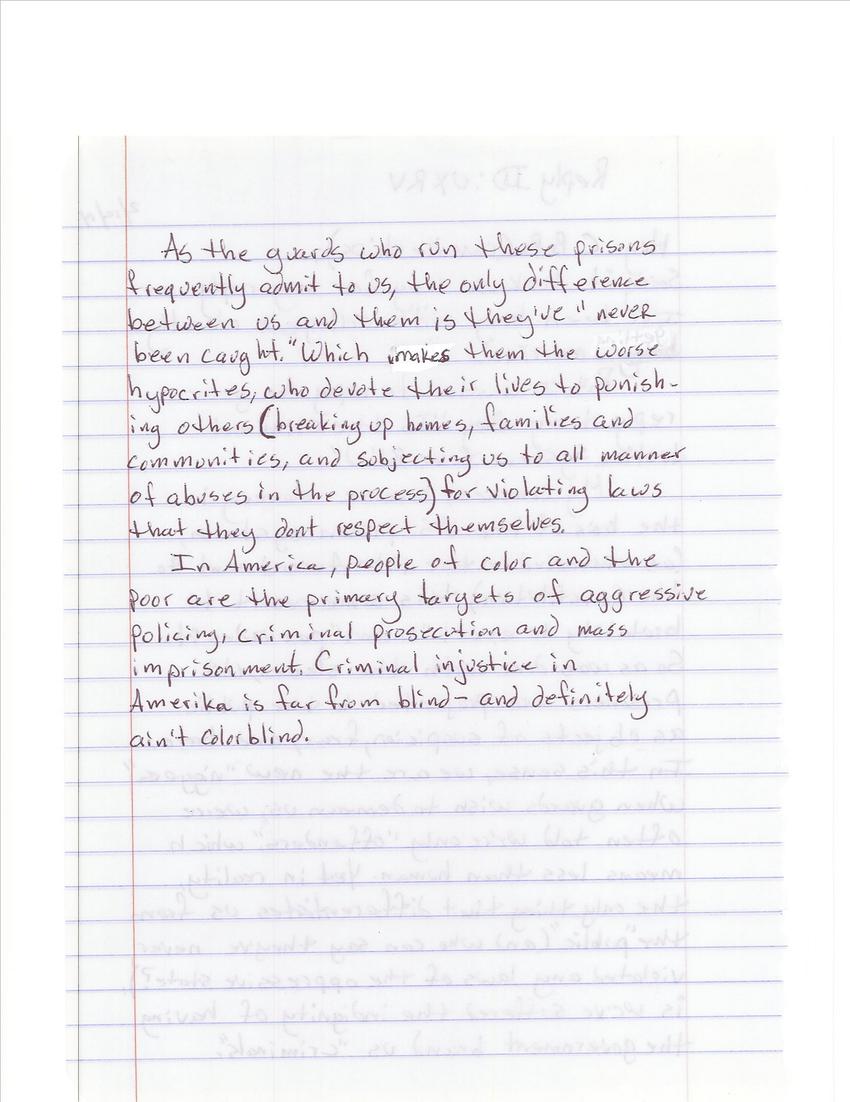