Fathers Step Up To their Position 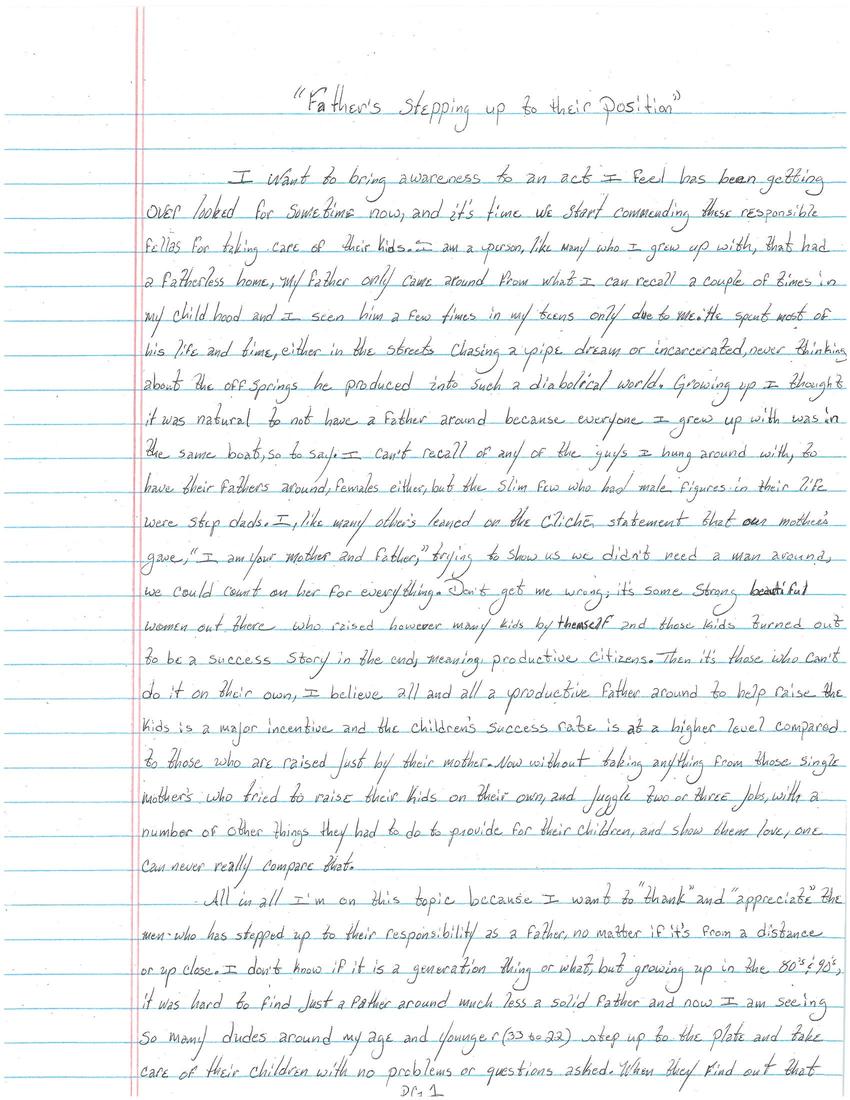 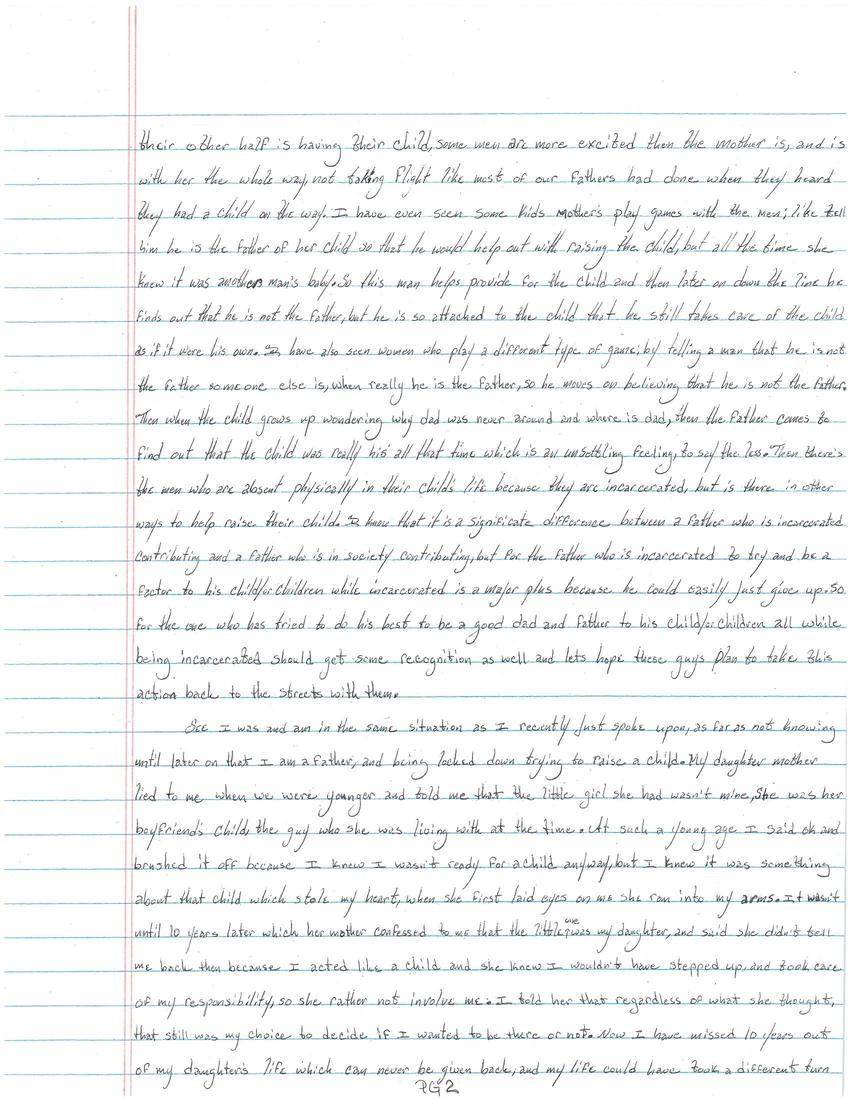 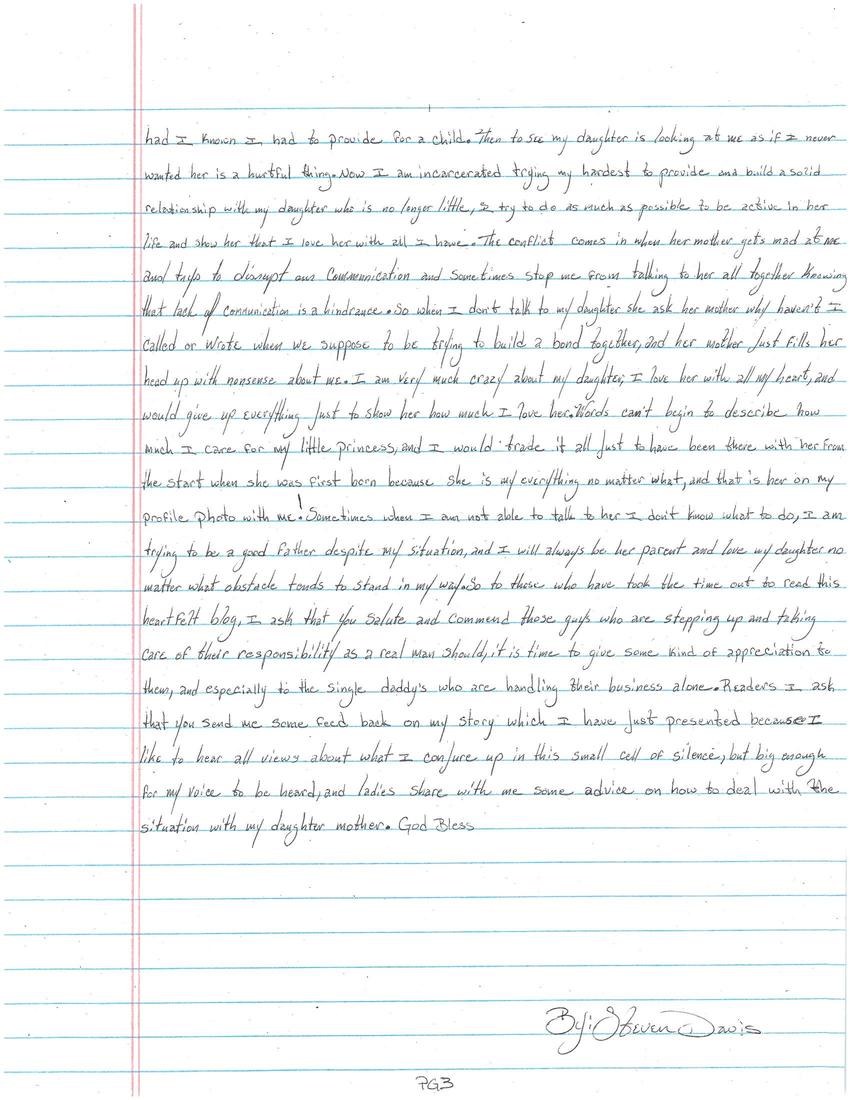 "Fathers Stepping up to their position"

I want to bring awareness to an act I feel has been getting over looked for sometime now, and i's time we start commending these responsible fellas for taking care of their kids. I am a person, like many who I grew up with, that had a Fatherless home, my Father only came round from what I can recall a couple of times in my childhood and I seen him a few times in my teens only due to me. He spent most of his life and time, either in the streets chasing a pipe dream or incarcerated, never thinking about the off springs he produced into such a diabolical world. Growing up I thought it was natural to not have a Father around because everyone I grew up with was in the same boat, so to say. I an't recall of any o the guys I hung around with, to have their Fathers around, females either, but the slim few has male. Figures in their life were Step Dads. I, like many other's leaned on the cliche statement that our mothers' gave. "I am your Mother and Father", trying to shww us we didn't need a man around, we could count on her for everything. Don't get me wrong, it's some strong beautiful womn out there, who raised however many kids by themself and those kids turned out to be a success story in the end, meaning productive citizens. Then its those who can't do it on their own, I belive all and all a productive Father around to help raise the kids is a major incentive and the children's success rate is at a higher rate level compared to those who are raised just by their Mother. Now without taking anything from those single Mother's who tried to raise their kids on their own, and juggle two or three jobs, with, a number of other things they had to do to provide for their children, and show them love, one can never really compare that.

All in all I'm on this topic because I want to "thank" and "appreciate" the man who has stepped up to their responibility as Father, no matter if it's from a distance or up close. I don't know if it is a generation thing or what, but growing up in the 80's and 90's it was hard to find just a Father around muh less a solid Father and now I am seeing so many dudes around my age and younger (33 to 22) step up to the plate and take care of their children with no problems or questions asked. When they find out that their other half is having their child. Some men are more excited than the Mother is, and is with her the whole way, not taking flight like most of our Fathers had done when they heard they had a child on the way. I have even some kids Mother's play games with the men; like tell him he is the Father of her child so that he would help out with raising the child, but all the time she knew it was another man's baby. So this man helps provide for the child and then later on down the time he finds out that he is not the Father, but he is so attached to the child th the still takes care of the child as if it were his own. I have also seen women who play a different type of game by telling a man that he is not the Father, someone else is, when really he is the Father, so he moves on believing that he is not the Father. then when the child grows up wondering why Dad was never around and where is Dad, then the Father comes to find out that the child was really his all that time which isan unsettling feelinbg, to say the less. Then there's the men who are absent physically in their child's life because they are incarcerated, but is there in other ways to help raise their child. I know that it is a significant difference between a Father who is incarcerated contributing and a Father who is in society contributing, but for the Father who is incarcerated to try and be a factor to his child/or children while incarcerated is a major plus because he could easily just give up. So for the one who has tried to do hi best to be a goo Dad and Father to his child/or children all while being incacerated should get some recognition as well and lets hope thses guys pla to take this action back to the streets with thm.

Once I was and am in the same situation as I recently just spoke upon, as far as not knowing until later on that I am a Father, and being looked dwn trying to raise a child. My daughter's Motherlied to me when we were younger and told me that the little girl she had wasn't mine. She was her boyfriend's child the guy who she was living with at the time. At such a young age I said ok and brushed it off because I knew I wasn't ready for a chikd anyway, but I knew it was something about that child which state my heart, when she first laid eyes on me she ran into my arms. It wasn't until 10 years later which her mother confessed to us that the little one was my daughter, and said she didn't tell me back them because I acted like a child and she knew I wouldn't have stepped up and took care of my responsibility, so she rather not involve me. I told her that regardless of what she thought, that still was my choice to decide if I wanted to be there or not. Now I have missed 10 years out or my daughters life which can never be given back, and my life could have took a different turn had I known I had to provide for a child. Then to see my daughter is looking at me as if I never wanted her is a hurtful thing. Now I am incarcerated trying my hardest to provide and build a solid relationship with my daughter who is no longer little, so try to do as much as possible to be active in her life and sho her that I love her with all I have. The conflict comes in when her Mother gets mad at me and tries to disrupt our communication and sometimes stop me from talking to her all together knowing that task of communication is a hindrance. So when I don't talk to my daughter she ask her Mother why haven't I called or wrote when we suppose to be trying to build a bond together, and her Mother just fills her head up with nonsense about me. I am very much crazy about my daughter, I love her with all my heart, and would give up everything just to show her how much I love her. Words can't begin to describe how muc I care for my little Princess, and I would trade it all just to have been there with her from the start when she was first born because she is my everything no matter what, and that is her on my profile photo with me! Sometimes when I am not able to talk to her I don,t know what to do, I am trying to be a good Father despite my situation, and I will always be her parent and love my daughter no mater what obstacle tends to stand in my way. So to those who have took the time out to read this heartfelt blog. I ask that you salute and commend those guys who are stepping up and taking care of their responsibility as a real ma should, it is time to give some kind of appreciation to them, and especially to the single Daddy's who are hndling their business alone. Readers I ask that you send me some feedback on my story which I have just presented because I like to hear all views about wht I conjure up in this small cell of silence, but big enough for my voice ot be heard, and ladies share with me some advice on how to deal with the situation with my daughter's Mother. God Bless