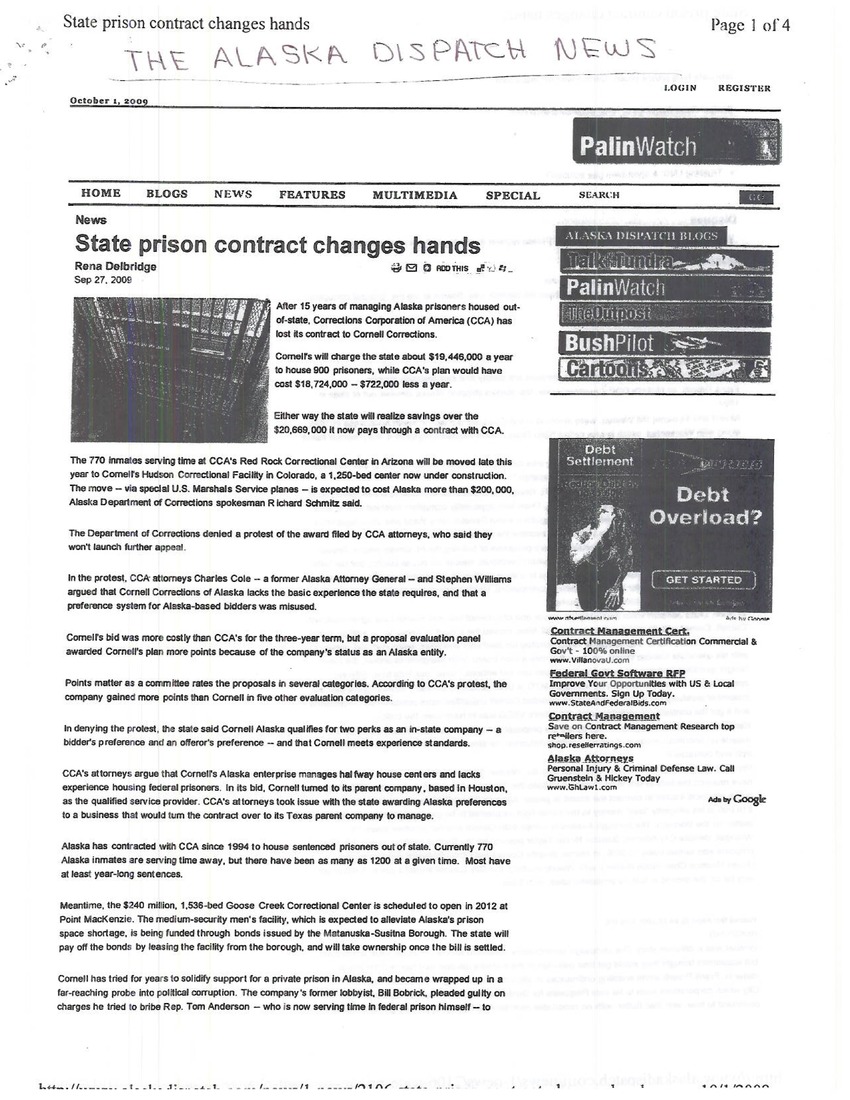 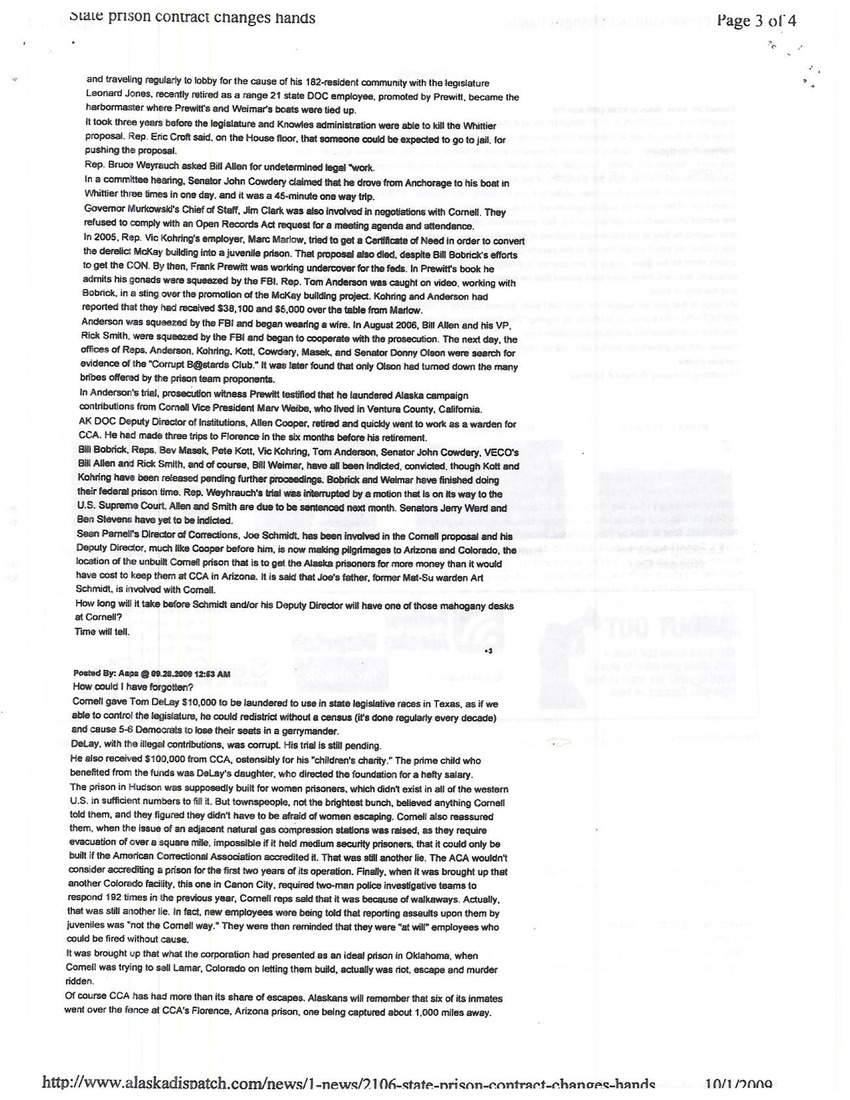 After 15 years of managing Alaska prisoners house out-of-state, Corrections Corporation of America (CCA) has lost its contract to Cornell Corrections.

Either way the state will realize savings over the $20,669,000 it now pays through a contract with CCA.

The Department of Corrections denied a protest of the award filed by CCA attorneys, who said they won't launch further appeal.

In the protest, CCA attorneys Charles Cole - a former Alaska Attorney General - and Stephen Williams argued that Cornell Corrections of Alaska lacks the basic experience the state requires, and that a preference system for Alaska-based bidders was misused.

Cornell's bid was more costly than CCA's for the three-year term, but a proposal evaluation panel awarded Cornell's plan more points because of the company's status as an Alaskan entity.

Points matter as a committee rates the proposals in several categories. According to CCA's protest, the company gained more points than Cornell in five other evaluation categories.

In denying the protest, the state said Cornell Alaska qualifies for two perks as an in-state company - a bidder's preference and an offeror's preference - and that Cornell meets experience standards.

CCA's attorneys argue that Cornell's Alaska enterprise manages halfway house centers and lacks experience housing federal prisoners. In its bid, Cornell turned to its parent company, based in Houston, as the qualified service provider. CCA's attorneys took issue with the state awarding Alaska preferences to a business that would turn the contract over to its Texas parent company to manage.

Alaska has contracted with CCA since 1994 to house sentenced prisoners out of state. Currently 770 Alaska inmates are serving time away, but there have been as many as 1200 at a given time. Most have at least year-long sentences.

Meantime, the $240 million, 1,536-bed Goose Creek Correctional Center is scheduled to open in 2012 at Point MacKenzie. The medium-security men's facility, which is expected to alleviate Alaska's prison space shortage, is being funded through bonds issued by the Matanuska-Susitna Borough. The state will pay off the bonds by leasing the facility from the borough, and will take ownership once the bill is settled.

Cornell has tried for years to solidify support for a private prison in Alaska, and became wrapped up in a far-reaching probe into political corruption. The company's former lobbyist, Bill Bobrick, pleaded guilty on charges he tried to bribe Rep. Tom Anderson - who is now serving time in federal prison himself - to and traveling regularly to lobby for the cause of his 182-resident community with the legislature Leonard Jones, recently retired as a range 21 state DOC employee, promoted by Prewitt, became the harbormaster where Prewitt and Weimar's boats were tied up.

It took three years before the legislature and Knowles administration were able to kill the Whittier proposal. Rep. Eric Croft said on the House floor that someone could be expected to go to jail for pushing the proposal.

In a committee hearing, Senator John Cowdery claimed that he drove from Anchorage to his boat in Whittier three times in one day, and it was a 45-minute one way trip.

Governor Murokweski's Chief of Staff, Jim Clark, was also involved in negotiations with Cornell. They refused to comply with an Open Records Ad request for a meeting agenda and attendance.

In 2005, Rep. Vic Kohring's employer, Marc Mariow, tried to get a Certificate of Need in order to convert the derelict McKay building into a juvenile prison. That proposal also died, despite Bill Bobrick's efforts to get the CON. By then, Frank Prewitt was working undercover for the feds. In Prewitt's book, he admits his gonads were squeezed by the FBI. Rep. Tom Anderson was caught on video, working with Bobrick, in a sting over the promotion of the McKay building project. Kohring and Anderson had reported that they had received $38,100 and $6,000 over the table from Marlow.

Anderson was squeezed by the FBI and began wearing a wire. In August 2006, Bill Allen and his VP, Rick Smith, were squeezed by the FBI and began to cooperate with the prosecution. The next day, the offices of Reps. Anderson, Kohring, Kott, Cowdery, Masek, and Senator Donny Olson were searched for evidence of the "Corrupt B@astards Club." It was later found that only Olson had turned down the many bribes offered by the prison team proponents.

AK DOC Deputy Director of Institutions, Allen Cooper, retired and quickly went to work as a warden for CCA. He had made three trips to Florence in six months before his retirement.

Bill Bobrick, Reps. Bev Massak, Pete Kott, Vic Kohring, Tom Anderson, Senator John Cowdery, VECO's Bill Allen and Rick Smith, and of course, Bill Welmer, have all been indicted, convicted, though Kott and Kohring have been released pending further proceedings. Bobrick and Welmer have finished doing their federal prison time. Rep. Wayhrauch's trial was interrupted by a motion that is on its way to the US Supreme Court. Allen and Smith are due to be sentenced next month. Senators Jerry Ward and Ben Stevens have yet to be indicted.

Sean Parnell's Director of Corrections, Joe Schmidt, have been involved in the Cornell proposal and his Deputy Director, much like Cooper before him, is now makign pilgrimages to Arizona and Colorado, the locations of the unbuilt Cornell prison that is to get the Alaska prisoners for more money than it would have cost to keep them at CCA in Arizona. It is said that Joe's father, former Mal-Su warden Art Schmidt, is involved with Cornell.

How long will it tkae before Schmidt and/or his Deputy Director will have one of those mahogany desks at Cornell?

Cornell gave Tom DeLay $10,000 to be laundered to use in state legislative races in Texas, as if we are able to control the legislators. He could redistrict without a census, it's done regularly every decade, and cause 5-6 Democrats to lose their seats in a gerrymander.

DeLay, with the illegal contributions, was corrupt. His trial is still pending.

He also received $100,000 from CCA ostensibly for his "children's charity." The prime child who benefited from the funds was DeLay's daughter, who directed the foundation for a hefty salary.

The prison in Hudson was supposedly built for women prisoners, which didn't exist in all of the western US in sufficient numbers to fill it. But townspeople, not the brightest bunch, believed anything Cornell told them, and they figured they didn't have to be afraid of women escaping. Cornell also reassured them when the issue of an adjacent natural gas compression station was raised, as they require evacuation of over a square mile, impossible if it held medium security prisoners, that it could only be built if the American Correctional Association accredited it.

Finally, when it was brought up that another Colorado facility, this one in Carson City, required two-man police investigative teams to respond 192 times in the previous year, Cornell reps said that it was because of walkaways. Actually, that was still another lie. In fact, new employees were being told that reporting assaults upon them by juveniles was "not the Cornell way." They were then reminded that they were "at will" employees who could be fired without cause.

It was brought up that what the corporation had presented as an ideal prison in Oklahoma, when Cornell was trying to sell Lamar, Colorado on letting them build, actually was riot, escape, and murder ridden.

Of course, CCA has had more than its share of escapes. Alaskans will remember that six of its inmates went over the fence at CCA's Florence, Arizona prison, one being captured about 1,000 miles away.