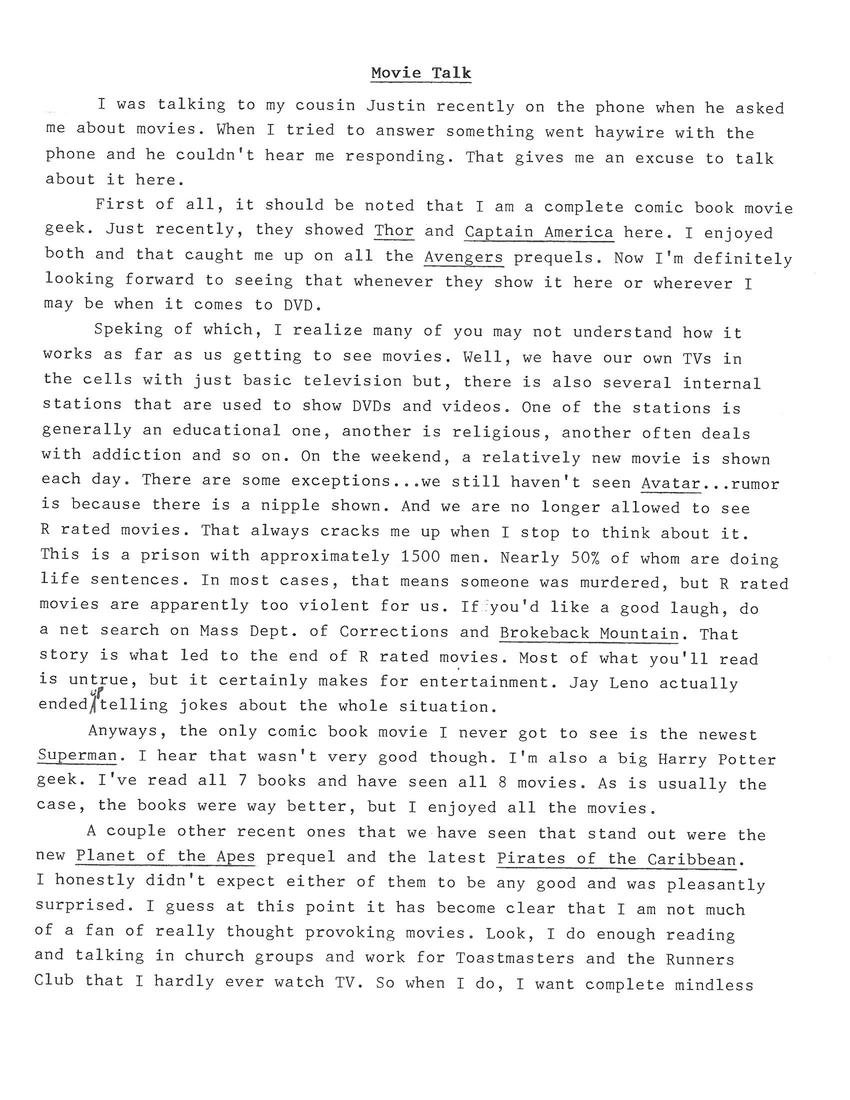 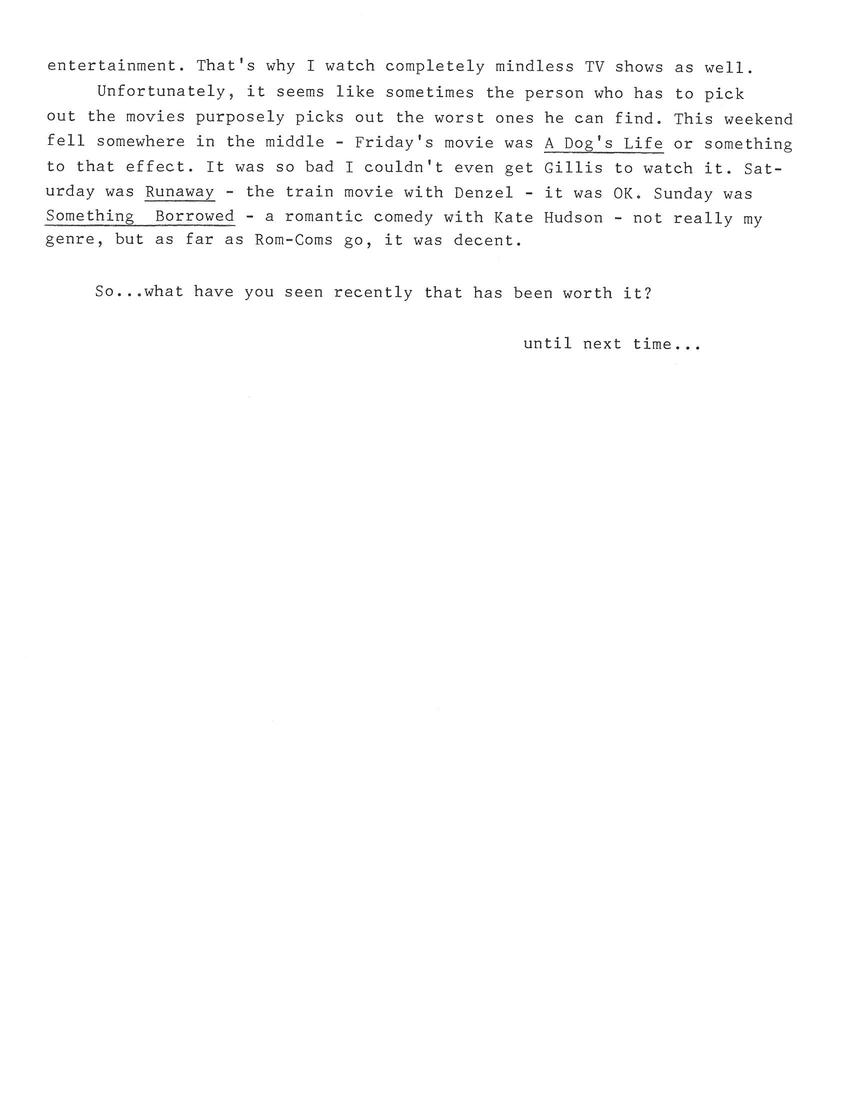 I was talking to my cousin Justin recently on the phone when he asked me about movies. When I tried to answer, something went haywire with the phone and he couldn't hear me responding. That gives me an excuse to talk about it here.

First of all, it should be noted that I am a complete comic book movie geek. Just recently, they showed Thor and Captain America here. I enjoyed both and caught me up on The Avengers prequels. Now I'm definitely looking forward to seeing that whenever they show it here or wherever I may be when it comes to DVD.

Speaking of which, I realize many of you may not understand how it works for us getting to see movies. Well, we have our own TVs in the cells with basic television, but there is also several internal stations that are used to show DVDs and videos. One of the stations is generally an educational one, another is religious, another often deals with addiction, and so on. On the weekends, a relatively new movie is shown each day.

There are some exceptions. We still haven't seen Avatar. Rumor is because there is a nipple shown. And we are no longer allowed to see R-rated movies. That always cracks me up when I stop to think about it. This is prison with approximately 1,500 men, nearly 50% of whom are doing life sentences. In most cases, that means someone was murdered. But R-rated movies are apparently too violent for us.

If you'd like a good laugh, do a net search on Massachusetts Department of Corrections and Brokeback Mountain. That story is what led to the end of R-rated movies. Most of what you'll read is untrue, but it certainly makes for entertainment. Jay Leno actually ended up telling jokes about the whole situation.

Anyways, the only comic book movie I never got to see is the newest Superman. I hear that wasn't very good though. I'm also a big Harry Potter geek. I've read all seven books and have seen all eight movies. As is usually the case, the books were way better. But I enjoyed all the movies. A couple of other recent ones we saw that stood out were the new Planet of the Apes prequel and the latest Pirates of the Caribbean. I honestly didn't expect either of them to be any good and was pleasantly surprised.

I guess at this point it has become clear that I am not much of a fan of really thought-provoking movies. Look, I do enough reading and talking in church groups and work for Toastmasters and the Runners Club that I hardly ever watch TV. So when I do, I want complete mindless entertainment. That's why I watch completely mindless TV shows too.

Unfortunately, it seems like sometimes the person who has to pick out the movies purposely picks out the worst ones he can find. This weekend fell somewhere in the middle. Friday's movie was A Dog's Life or something to that effect. It was so bad I couldn't even get Gillis to watch it. Saturday was Runaway, the train movie with Denzel. It was okay. Sunday was Something Borrowed, a romantic comedy with Kate Hudson. Not really my genre, but as far as rom-coms go, it was decent.

So... what have you seen recently that has been worth it?

I love Thor....he's my favorite of all the Avengers! Try to get to the movies at least once a month. The next movie we are seeing (this coming week I hope) is Snow White and the Huntsman. I saw Dark Shadows (I love Johnny Depp) and The Hunger Games (Also great books) Wrath of the Titans...and I can't think of anything else now. I got my B-day card and I am writing you back now...so keep an eye out for my letter. Miss you tons...keep up the great work. TPJ
Bob, Hope things are going as well as can be. Matt P fwd me your blog and told me how you were doing....we were telling Jimmy KNowles stories and Cullen stories....and then you came up.
- I heard from Ken that you might be released in about 2 years....I hope so. Just wanted to give you a shout....you were always a great guy in the track world.....stay positive and healthy!!!
- Norm Bouthillier
Hi Bobby, just to let u know I am thinking of u.So many different things go on and time flies by.Hubby is still in the same place ..He told me to say "hi"...How r things with u? How is that place u r at? Silly question, they r all alike, right???
Hope u r well and busy, like u usually r.I love u and pray for u always..God Bless.
Hi Bob, I guess you know mom is home from the hospital by now and Cristen has been keeping you updated. We were there last night and aunty Janice slept there while Cristen was working. She is a very stubborn patient, always was.I didn't say anyting because I wanted to be sure Cris had contacted you first.Hope you are doing well, God Bless.
I was thinking that you would have liked the new Batman and Superman is coming out this summer.
Your old friend
Lisa
Hi Bobby!

What's up Biz?! I haven't talked to anyone in awhile. I come here looking at your blog, but the most recent post I can seem to find is this one - so I don't know if you stopped or not.
I miss everyone. It sounds stupid, but I really had a good time through all the ridiculousness, but then I'm crazy. I miss you too bud - through our running and dancing and praying and arguing and writing and just watching tv, you were a very happy part of my life.
Anyway, if there is a way to see newer posts, or if there even are any, let me know what it is.
Here's hoping to hear from you and hoping the feds are being good to you.