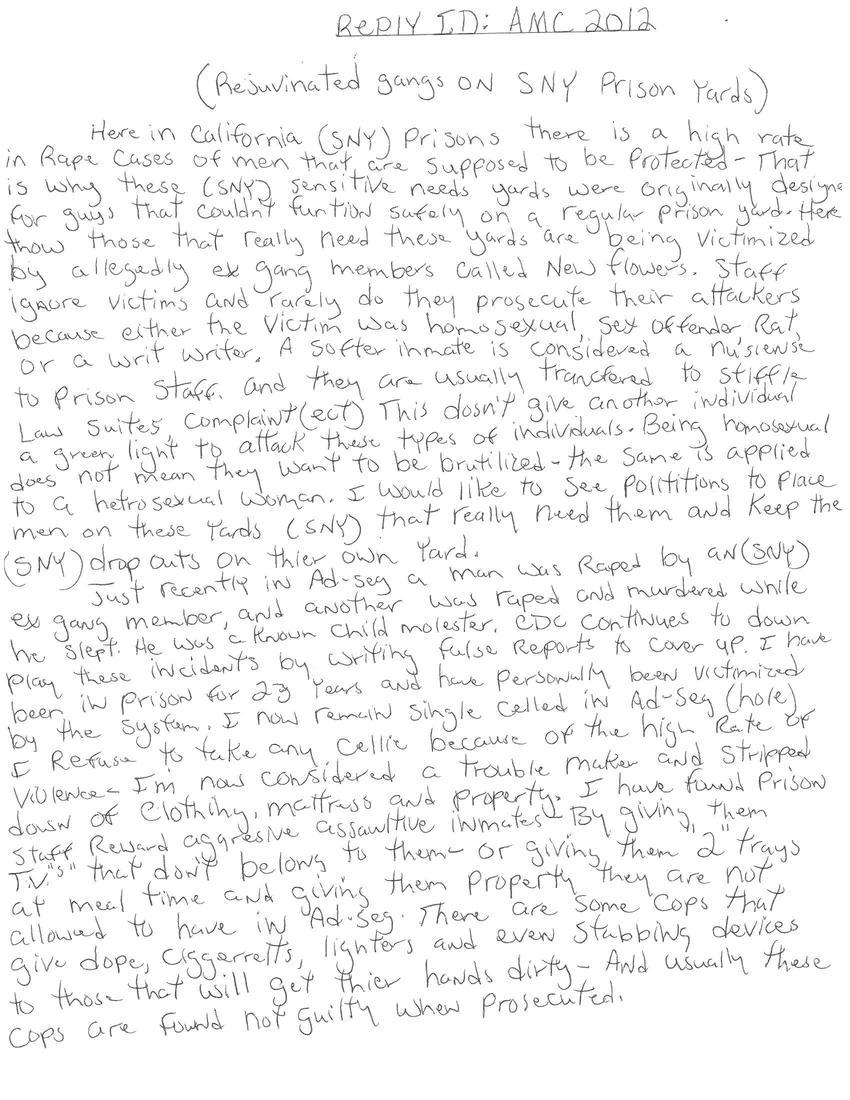 Here in California (SNY) prisons there is a high rate in Rape cases of men that are supposed to be protected - that is why these (SNY) sensitive needs yards wer originally designed for guys that couldn't function safely on a regular prison yards. Here though those that really need these yards are being victimized by allegedly ex gang members called new flowers. Staf ignore victims and rarely do they prosecute their attackers because either the victim was homosexual, sex offender, Rat, or a writ writer. A softer inmate is considered a nuisance to prison staff and they are usually transferred to stifle law suits complaint (etc). This doesn't give another individual a gren light to attack these types of individuals. Being homosexual does not mean they want to be brutalized - the ame is applied to a heterosexual woman. I would like to see politicians place men on these yards (SNY) that really need them and keep the (SNY) drop outs on their own yard.

Just recently in Ad-seg a man was raped by an (SNY) ex gang member, and another was raped and murdered while he slept. He was a known child molester. CDC continues to downplay these incidents by writing false reports to cover up. I have been in prison for 23 years and have personally been victimized by the system. I now remain single celled in Ad-Seg (hole). I refuse to take any cell [?] because of the high rate of violence - I'm now considered to be a trouble maker and stripped down of clothing, mattress and property. I have found prison staff reward aggressive inmates by giving them TVs that don't belong to them-or giving them "2" trays at meal time and giving them property they are not allowed to have in Ad-Seg. There are some cops that give dope, cigarettes, lighters and even stabbing devices to those that will get their hands dirty - and usually these cops are found not guilty when prosecuted.

Thanks for writing! I finished the transcription for your post on rejuvinated gangs in SNY.
Dear Mr. Collins,

Thank you very much for posting this information. I read your profile and green is also my favorite color (specifically, grass green).

I recently read about Ad-Seg and I'm surprised anyone would volunteer for it-- the alternative must be pretty rough if it's the better option. I can send you the article if you'd like to read it.

I'm glad this blog exists because I think a lot of what goes on in prison is kept quiet. If you'd like to write to me directly, my office address is:

The Nation
33 Irving Place
Eighth Floor
New York City 10003
thanks for writing this blog, found what you were saying to be very interesting and good to hear from someone who is not afraid to speak out, cant believe what goes on behind the prison walls
It makes me sick how awful our law inforcement is! They get away with everything becuase they have to upper hand in the judges eye's their just doing their job. HAHA. right! I bet their are way more DIRTY cops then their are legit! I could'nt amagine being in your shoes hun. But it sounds like you have a good shoulder on your head so keep your head held high and just smile at the fake ass law inforcement around you!


one love,
nikki
Thank you for writing this. I didn't know all of that about ad-seg, so I appreciate you sharing it. I hope things have gotten better since you wrote this (4 years ago), but I am doubtful. Still, I will be thinking of you and hoping for the best.
Sincerely,
Zach