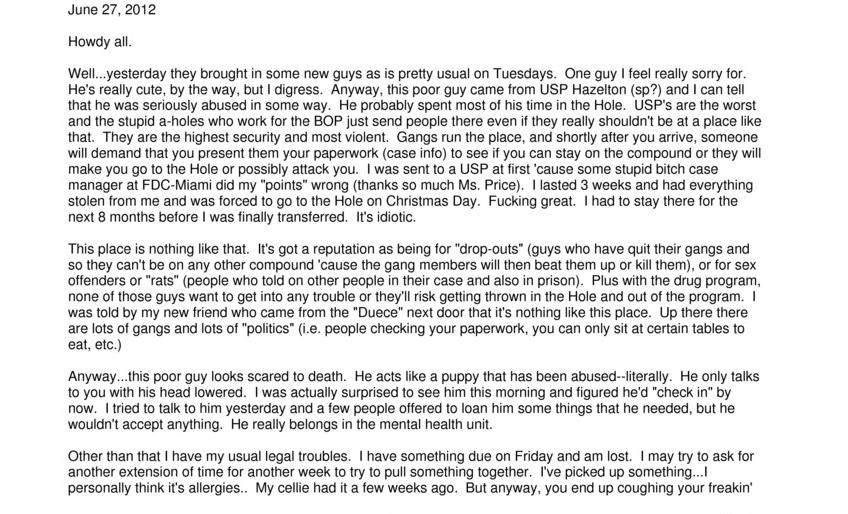 Well...yesterday they brought in some new guys as is pretty usual on Tuesdays. One guy I feel really sorry for. He's really cute, by the way, but I digress. Anyway, this poor guy came from USP Hazelton (sp?) and I can tell that he was seriously abused in some way. He probably spent most of his time in the Hole. USPs are the worst and the stupid a-holes who work for the BOP just send people there even if they really shouldn't be at a place like that. They are the highest security and most violent. Gangs run the place, and shortly after you arrive, someone will demand that you present them your paperwork (case info) to see if you can stay on the compound or they will make you go to the Hole or possibly attack you. I was sent to a USP at first 'cause some stupid bitch case manager at FDC-Miami did my "points" wrong (thanks so much, Ms. Price). I lasted 3 weeks and had everything stolen from me and was forced to go to the Hole on Christmas Day. Fucking great. I had to stay there for the next 8 months before I was finally transferred. It's idiotic.

This place is nothing like that. It's got a reputation as being for "drop-outs" (guys who have quit their gangs and so they can't be on any other compound 'cause the gang members will then beat them up or kill them), or for sex offenders or "rats" (people who told on other people in their case and also in prison). Plus with the drug program, none of those guys want to get into any trouble or they'll risk getting thrown in the Hole and out of the program. I was told by my new friend who came from the "Deuce" next door that it's nothing like this place. Up there there are lots of gangs and lots of "politics" (i.e. people checking your paperwork, you can only sit at certain tables to eat, etc.)

Anyway... this poor guy looks scared to death. He acts like a puppy that has been abused -- literally. He only talks to you with his head lowered. I was actually surprised to see him this morning and figured he'd "check in" by now. I tried to talk to him yesterday and a few people offered to loan him some things that he needed, but he wouldn't accept anything. He really belong in the mental health unit.

Other than that I have my usual legal troubles. I have something due on Friday and am lost. I may try to ask for another extension of time for another week to try to pull something together. I've picked up something... I personally think it's allergies. My cellie had it a few weeks ago. But anyway, you end up coughing your freakin' head off all night long, which is what happened 2 nights ago and I couldn't sleep. I can breathe during the day and feel better, but it comes at night when you lay down. Last night wasn't as bad, but I still had several coughing fits.

In a couple days the temps are supposed to be in the 100's and they will probably close the "yard" like they did last year. That's really a pain. I can understand putting up warnings to stay out of the heat so they don't have any liability, but they close the yard entirely. There's NOTHING to do at this place, so that's really stupid. Most other places have more things to do.

OK... I guess that's about it for now. I'm so glad they have finally approved me for email, but since they charge by the minute it can be expensive. Ciao!