Thoughts on A.I. and Douglas Hofstadter 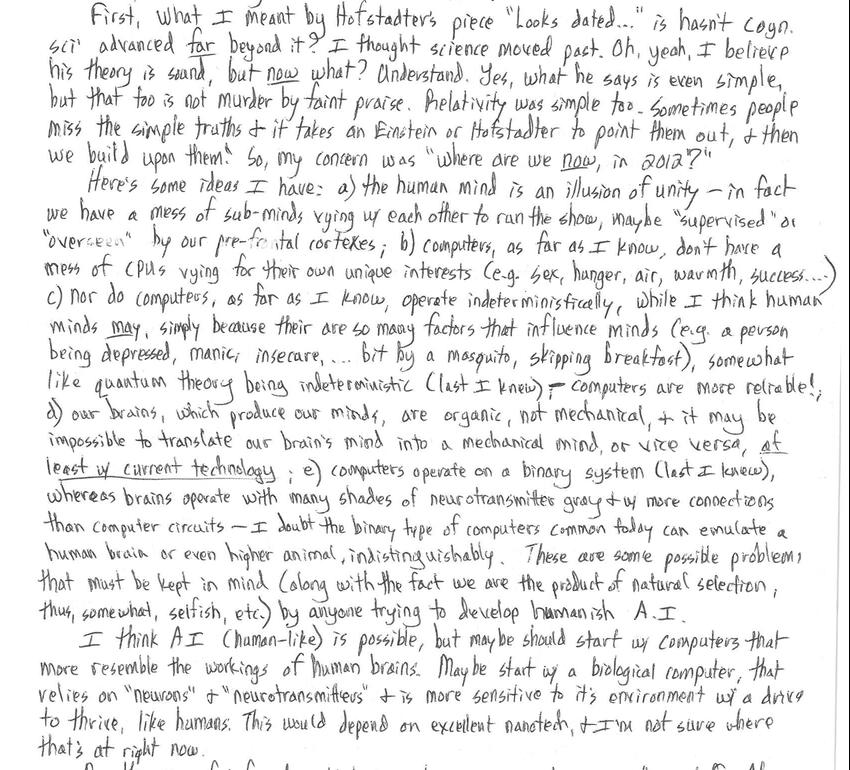 First, what I meant by Hofstadter's piece "Looks dates..." is hasn't coyn. Sci advanced far beyond it? I thought science moved past. Oh, yeah, I believe his theory is sound, but now what Understand. Yes, what he says is even simple, but that too is not murder by faint praise. Relativity was simple too. Sometimes people miss the simple truths and it takes an Einstein or Hofstadter to point them out, and then we build upon them" So my concern was "where are we now , in 2012"

Here's some ideas I have: a) the human mind is and illusion of unity - in fact we have a mess of sub-minds vying with each other to run the show, maybe "supervised" or "overseen" by our pre-frontal cortexes; b) computers, as far as I know, don't have a mess of CPU's vying for their own unique interests (e.g. sex, hanger, air, warmth, success...) c) nor do computers, as far as I know, operate indeterminisfically, while I think human minds may, simply because their are so many factors that influence minds (e.g. a person beig depressed, manic, insecure,...bit by a mosquito, skipping breakfast). somewhat like quantum theory being indeterministic (last I know) - computers are more reliable! d) our braind, which produce our minds, áre organic, not mechanical, and it may be impossible to translate our brain's mind into a mechanical mind, or vice versa, at least with current technology; e) computers operate on a bianry system (last I knew), whereas brains operate with many shades of neurtransmitter gray and in more connections than computer circuits - I doubt the binary type of computers common today can emulate a human brain or even higher animal, indostinguishably. These are some possible problems, that must be kept in mind (along with the fac that we are the product of natural selection, thus, somwhat, selfish, etc) by anyone trying to develop humanish A I.

I think A I (human-like)is possible, but maybe should start witrh computers that more resemble the workings of human brains. May be start with a biological computer, that relies on "neurons" and "neurotransmitters and is more sensitive to it's environemnt with a drive to thrive, like humans. This would deoend on excellent nanotech, and I am not sure where that's at right now.

Thanks for writing! I finished the transcription for your post.
One thing to consider about A.I. is that we may be A.I. ourselves inside a digital computer. There is something called digital physics and also Nick Bostrom's "Simulation Argument" that questions whether or not we are currently living in a simulation right now. This would mean that potentially there could be an afterlife where you could go into another simulation when you are done with this one. As an antitheist or atheist to me it sounds like quackery and crackpot but Nick Bostrom argues that it is more likely that we are in a simulation than a real universe, because more simulations exist than real universes. If you consider for example there are 100 universes or 1000 of them (just as an example only) and in these universes there are hundreds of simulations running, then the math seems to point to the fact that there are more simulations than real universes.. so the likelihood of us being in a real universe are small.

However I have some problems with this math because if there are infinite real universes and infinite simulated universes, how can there be more infinity of one, compared to the other? Isn't it like dividing by zero.. when you start to deal with infinity the math becomes a hoax... you can't work with infinity the same way you can't work with division by zero. Other conspiracies may be that zero is actually infinity itself... or that nothing is everything. It is mind boggling philosophical nonsense worth thinking about. The fact however remains that science may be able to answer the question of whether we are in an A.I. simulation right now or not.
(scanned reply – view as blog post)
uploaded Nov. 11, 2015.  Original (PDF) 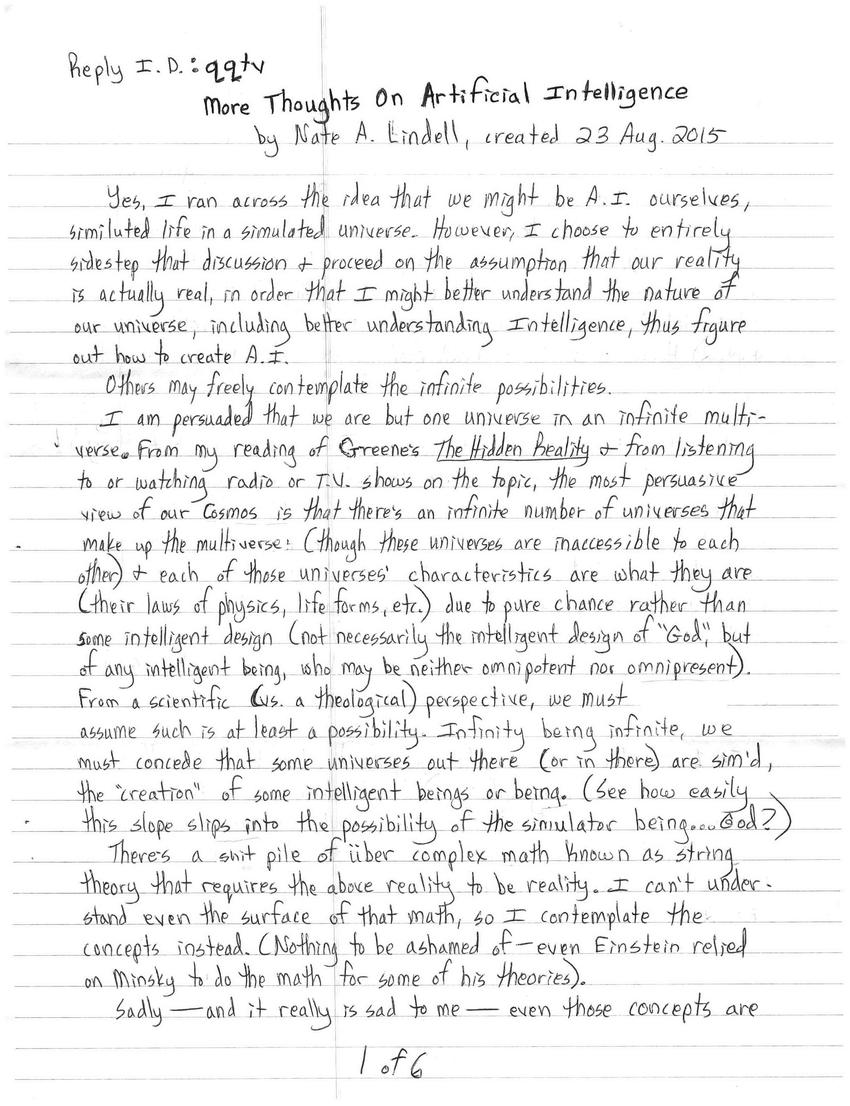 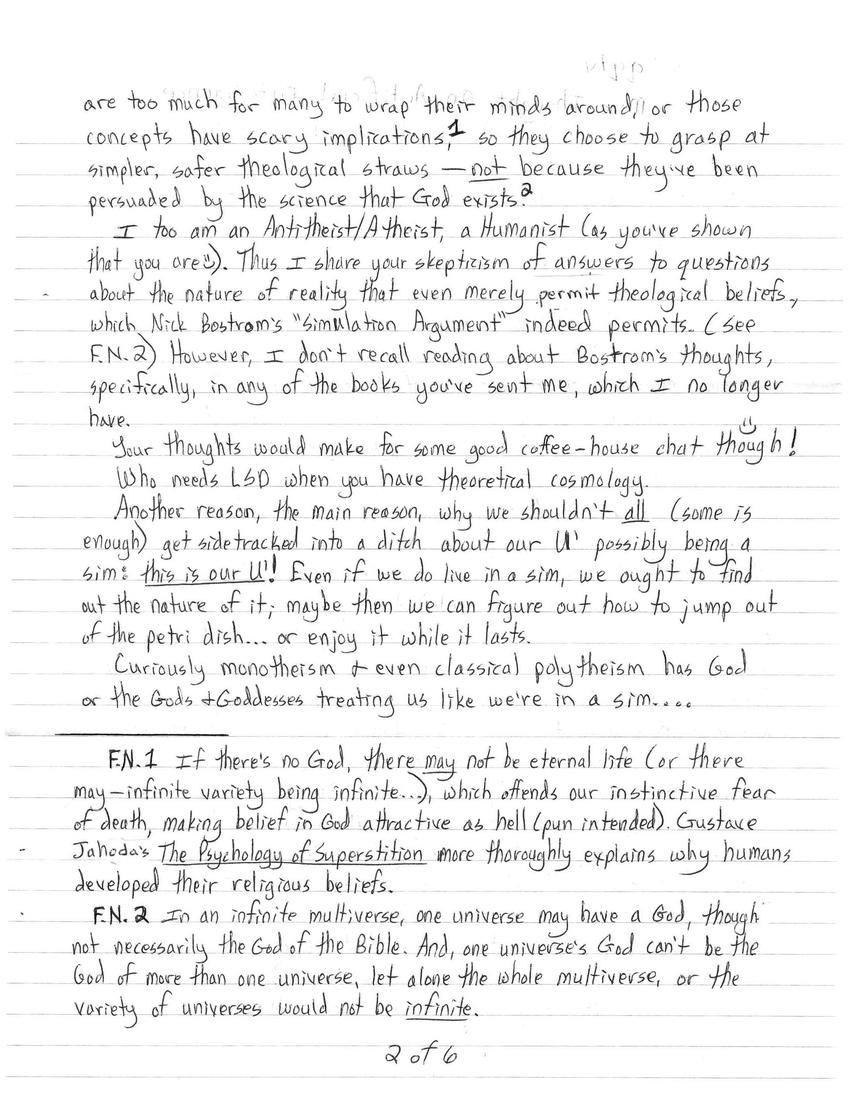 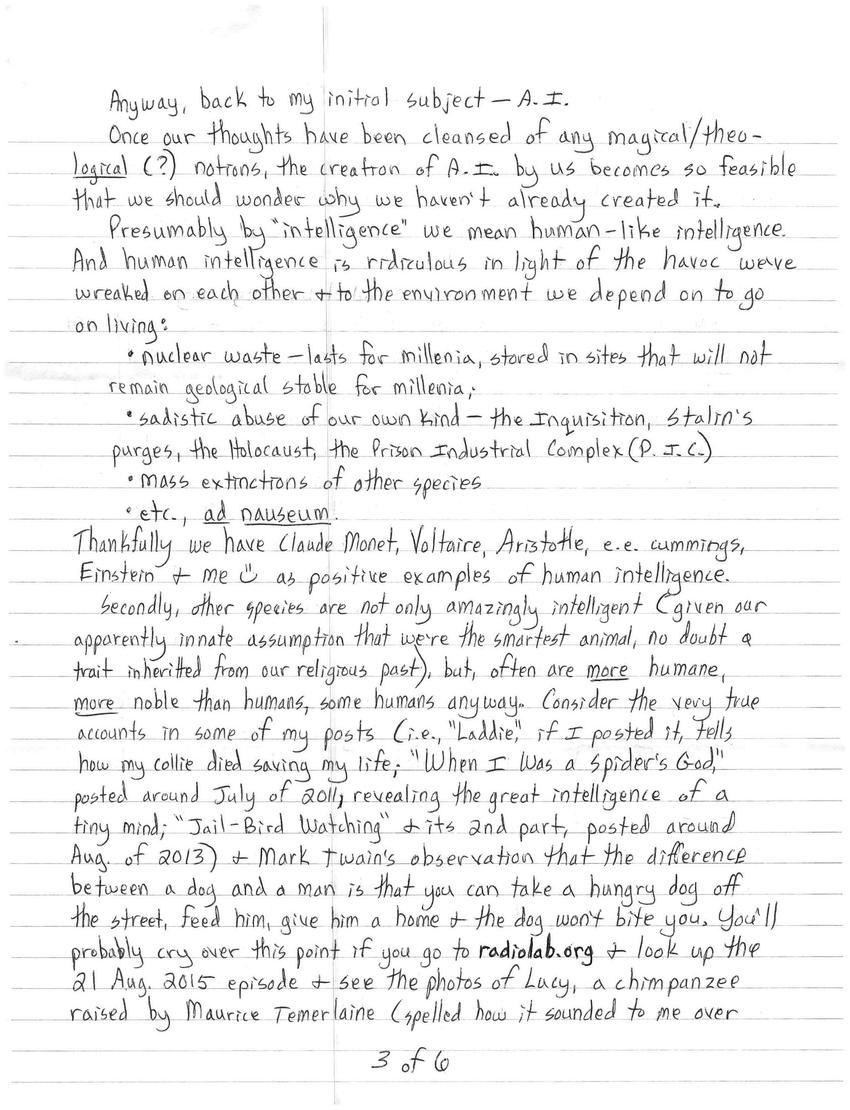 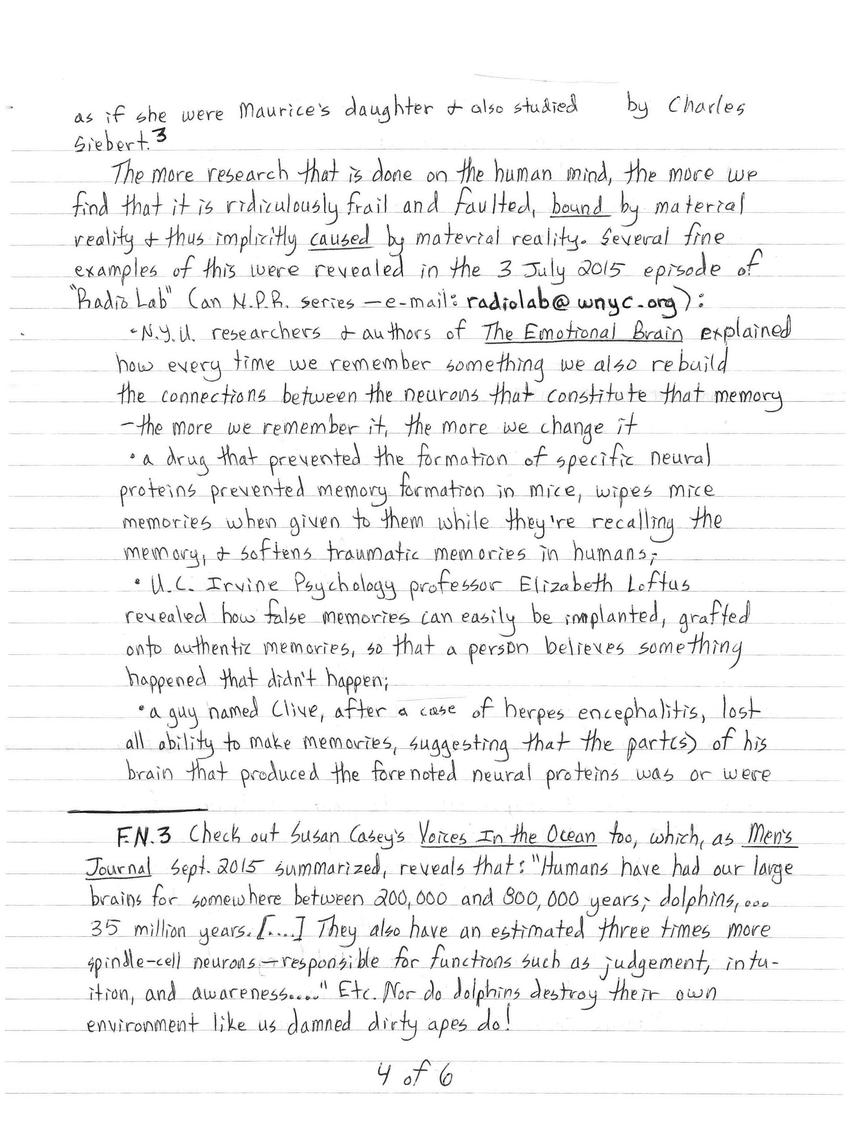 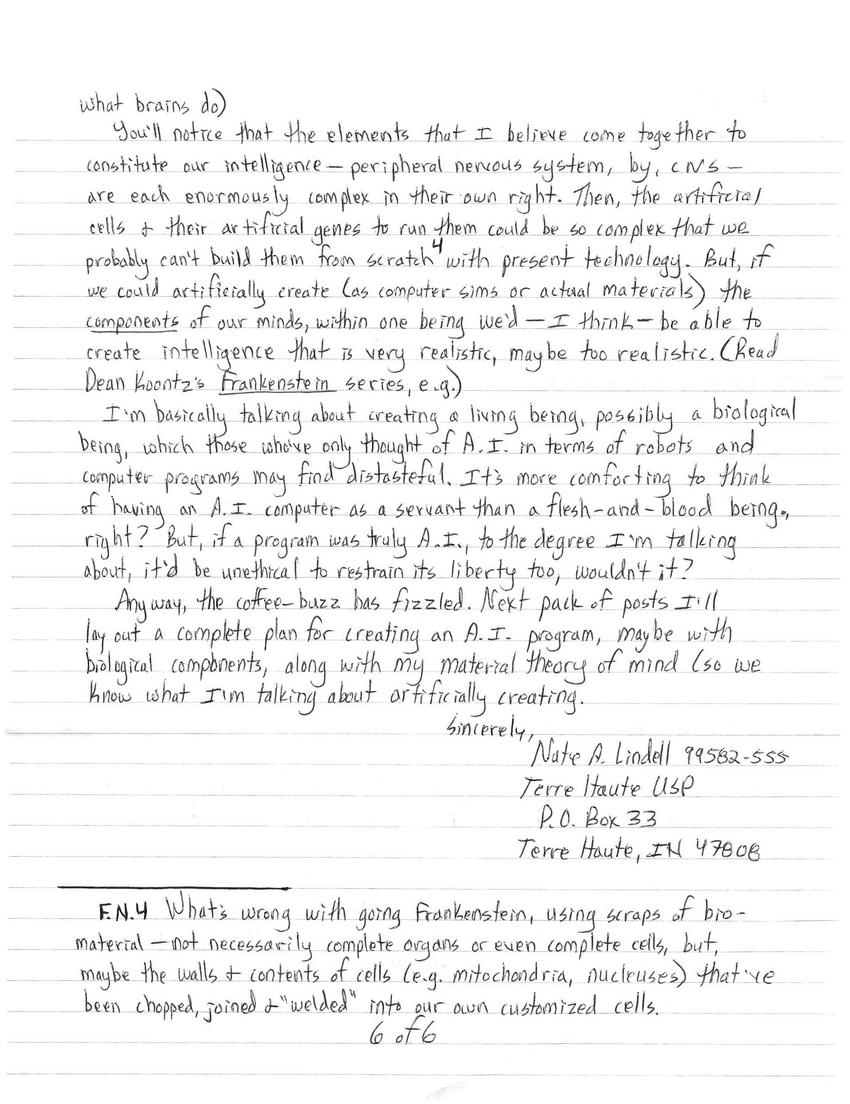