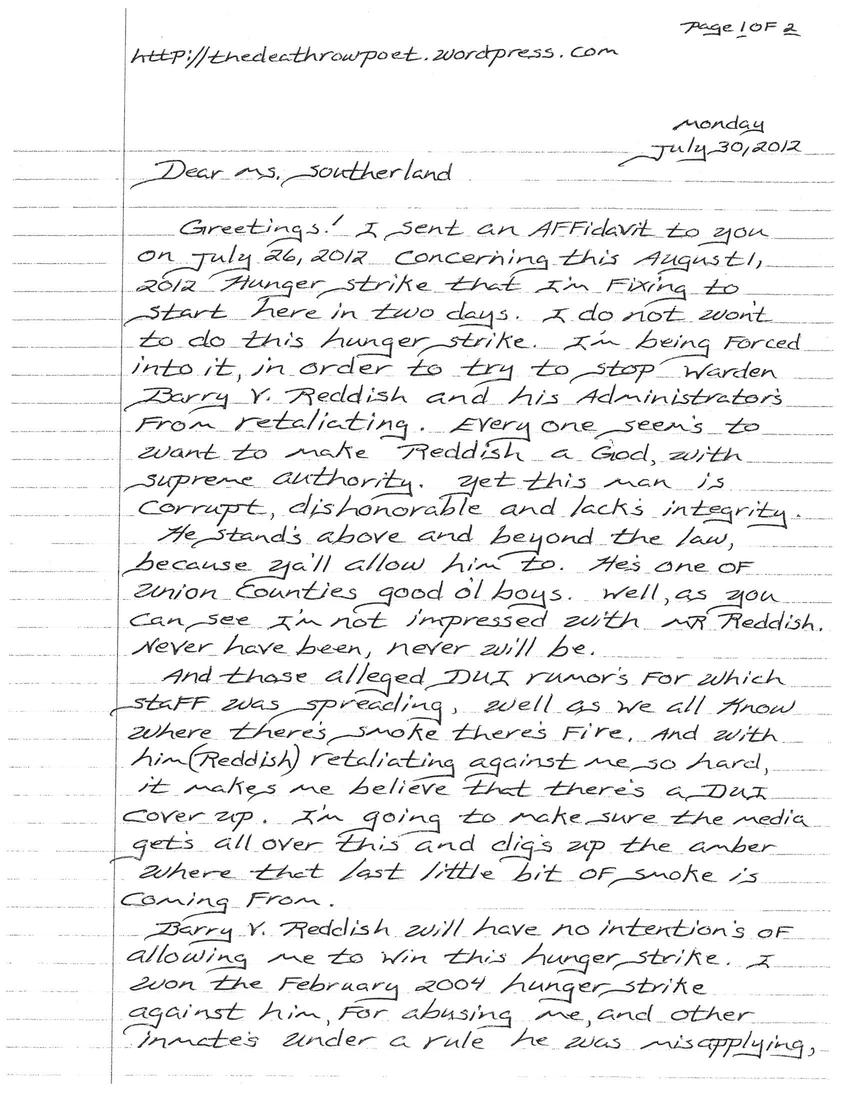 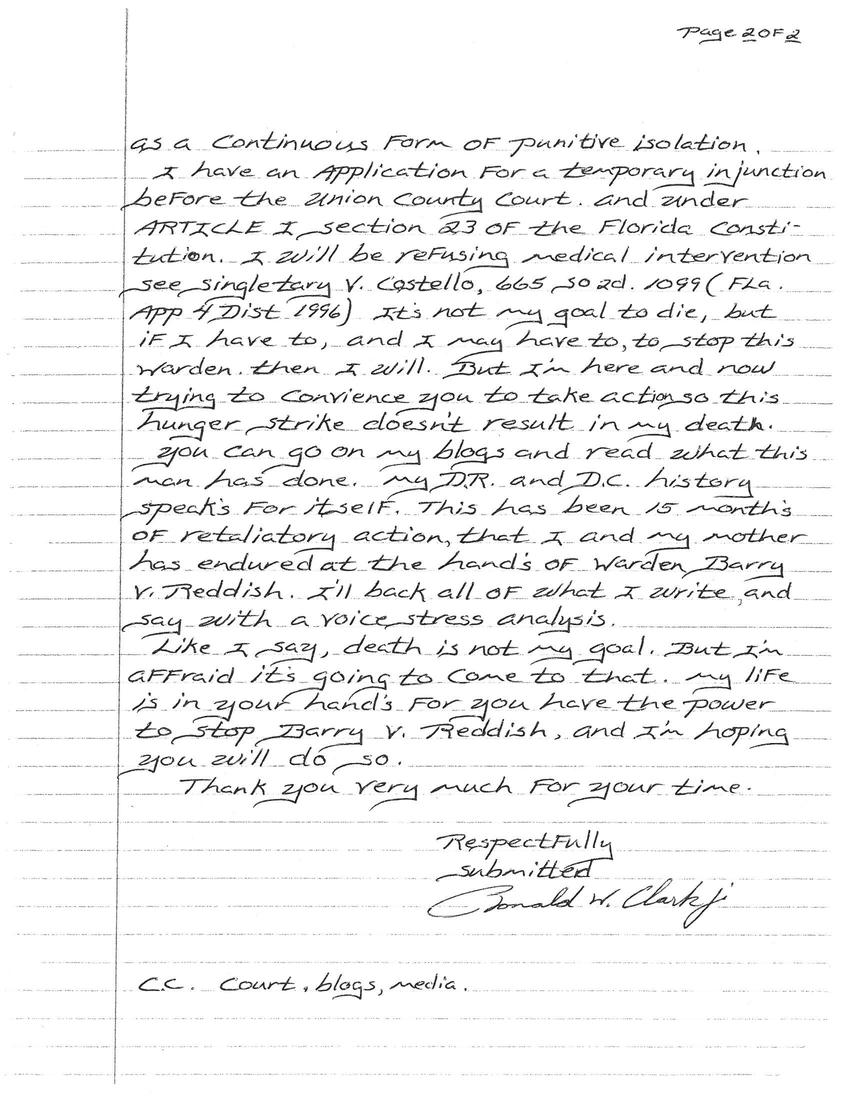 Greetings! I sent an affidavit to you on July 26, 2012 concerning this August 1, 2012 huhger strike that I'm fixing to start here in two days. i do not want to do this hunger strike. I'm being forced into it, in order to try to stop Warden Barry V Reddish and his adminstrator's from retaliating. Everyone seems to want to make Reddish a God, with supreme authority. Yer this man is corrupt, dishonoralbe and lacks interity.

He stand's above and beyond the law, because ya'll allow him to. He's one of union counties good ol boys. Well, as you can see I'm not impressed with Mr Reddish. Never have been, never will be.

And these alleged DUI rumor's for which staff was spreading, well as we all know where there's smoke there's foire. And with him (Reddish) retaliating against me so hard, it makes me believe that there's a DUI cover up. I'm going to make sure the media ge's all over this and digs uip the amber where that last littel bit of smoke is coming from.

Barry V Reddish will have no intention's of allowing me to win this hunger strike. I won the February 2004 hunger strike against himn for abusing me, and other inmates under a rule he was misapplying, as a continuous form of punitive isolation.

I have an application for a temporary injunction before the union county court and under article 1 section 23 of the Florida constitition. I will be refusing medical intervention see singletary V Costello, 665 502d. 1099 (fla app 4 Distr 1996). It's not my goal to die, but if I have to, and I may have to, to stop this warden, then I will. But I'm here and now trying to convince you to take action so this hunger strike doesn't result in my death. you can go on my blogs and read what's this man has done. My D R and D C history speaks for itself. This has been 15 months of retaliating action, that I and my mother has enduired at the hands of warden Barry V Reddish. I'll back all of what I write, and say with a voice stress analysis.

Like I say, death is not my goal. But I'm affraid it's going to come to that. My life is in your hand's for you have the power to stop Barry V Reddish, and I'm hoping you will do so.

Thank you very much for your time.

Thanks for writing! I finished the transcription for your post.
I am truly hoping that my other replies on other blogs you have written get to you, I have written many today (Sept 6th) and they are to be mailed to you BY sept 10th, a Monday. I typed up three pretty long replies to be sent your way on just one of your later entries from I think July plus many others along the way while reading too, please leave a comment response if you can/WHEN you are able to and let me know you receive at least six or seven replies from me because I truly want you to read them and take them into consideration and know that your words are very appreciated considering your situation lately. To share your world when its so tough and its a world that so many will never endure, I admire your strength to do that and to at least stand for something RIGHT and GOOD while you are stuck in there among the negativity and sadness. Still hoping that your posts are getting to BTB on time, and that Ill read some sort of evidence via your blog that you did not follow through with a deadly hunger strike. I wrote more about that on a seperate post of yours, and just hope that if you did choose to endure another strike that you at least get to read these from me first. Please think of everything. -CC
(scanned reply – view as blog post)
uploaded Oct. 18, 2012.  Original (PDF) 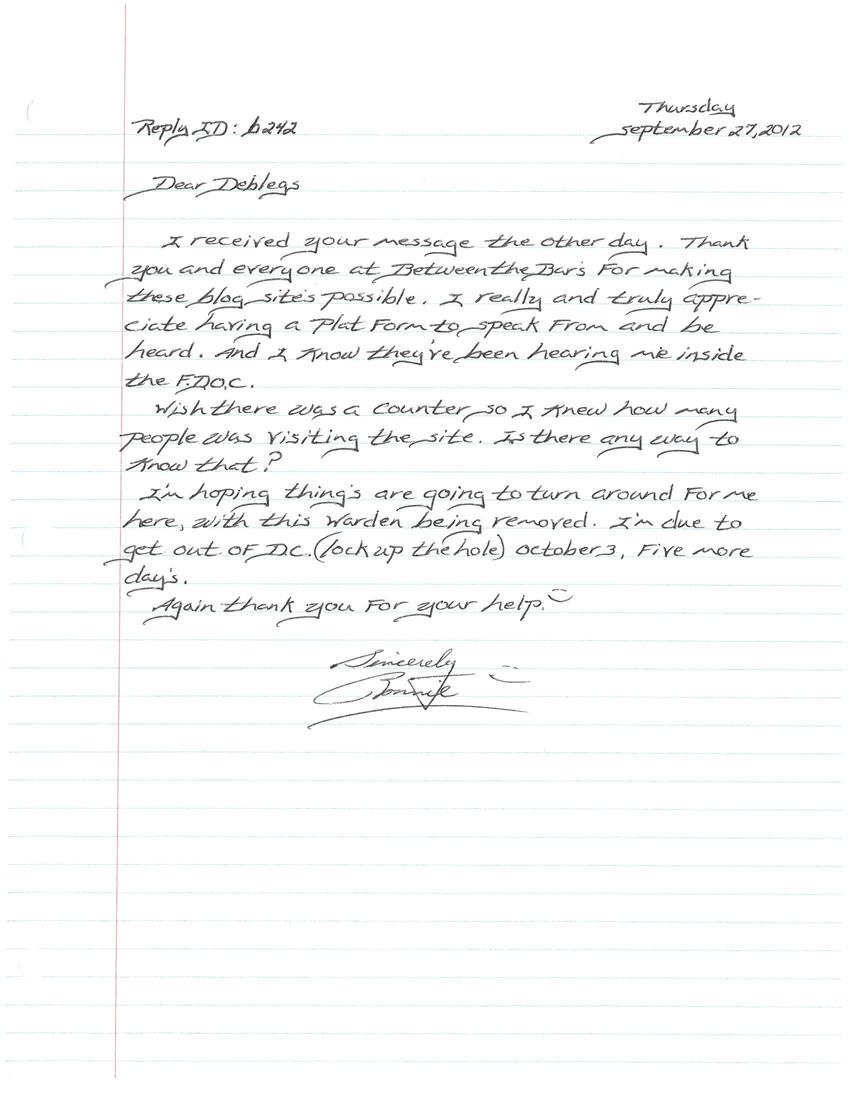 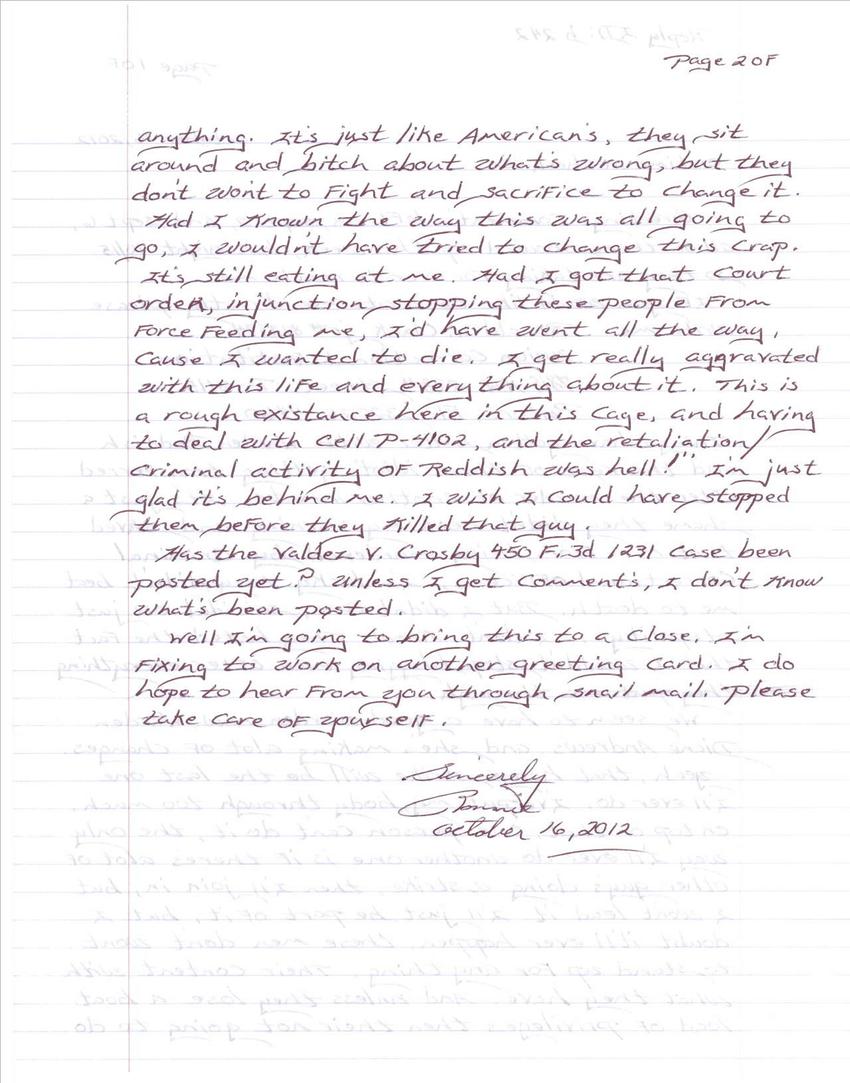