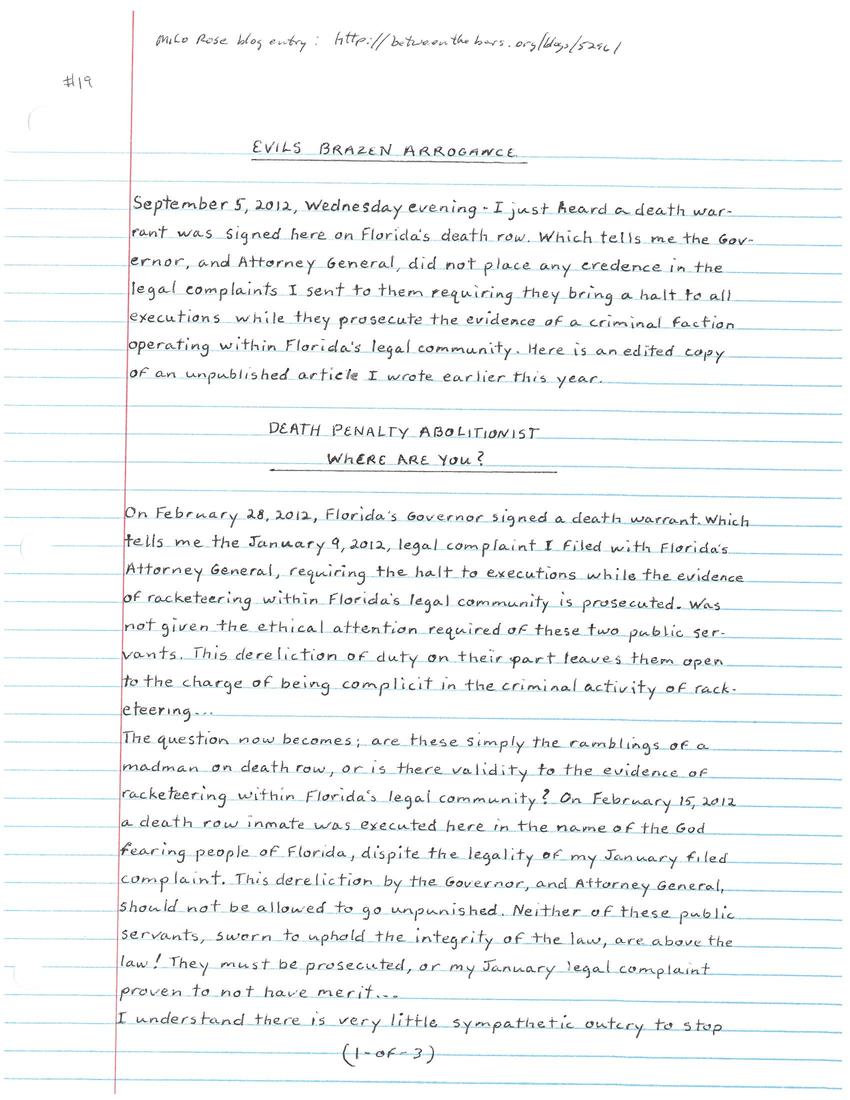 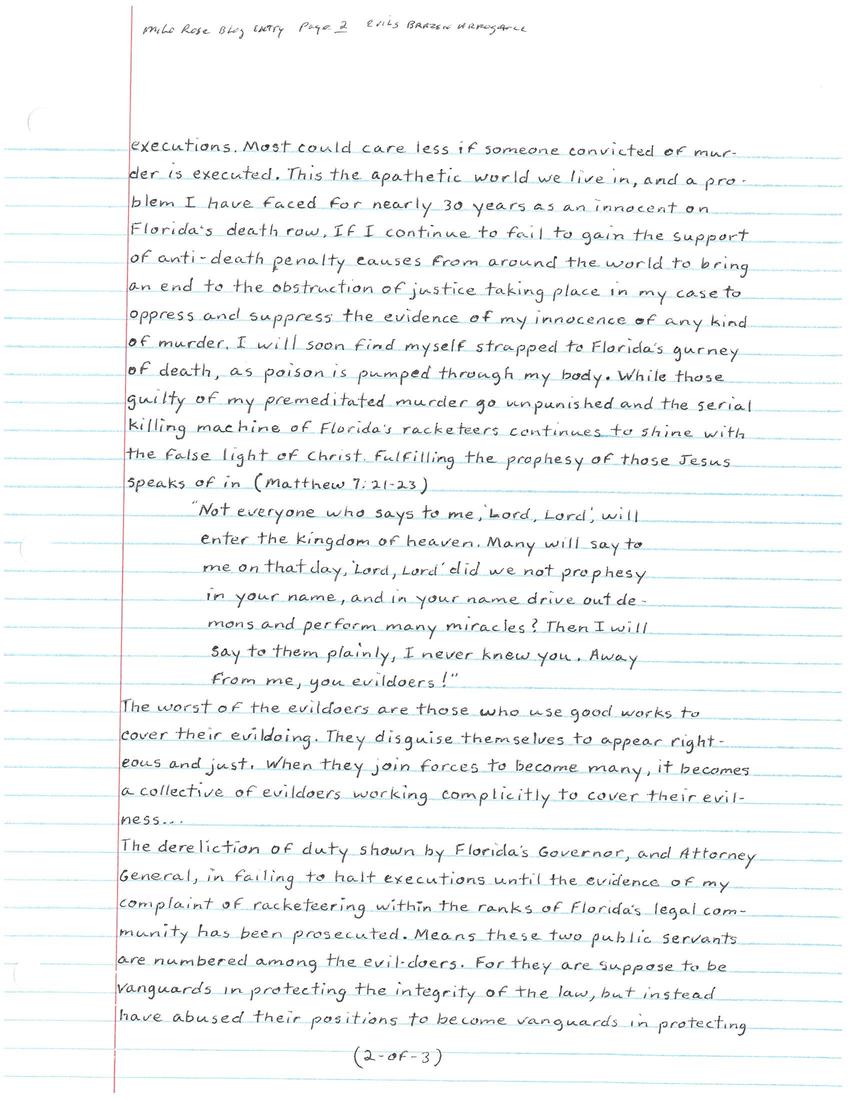 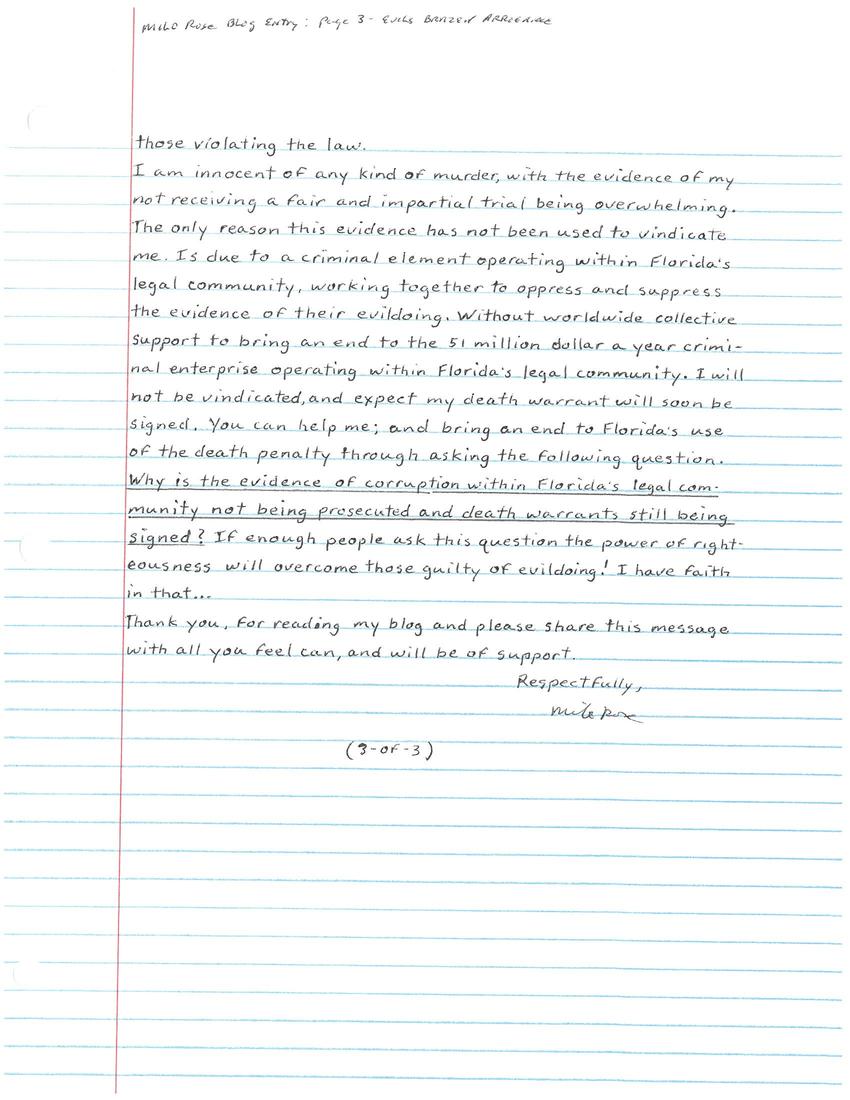 September 5, 21012, Wednesday evening, I just heard a death warrant was signed here on Florida's death row, which tells me the Governor, and Attorney General, did not place any credence in the legal complaints I sent to them requiring they bring a halt to all executions while they prosecute the evidence of a criminal faction operating within Florida's legal community. Here is an edited copy of an unpublished article I wrote earlier this year.

DEATH PENALTY ABOLITIONIST
WHERE ARE YOU?

On February 28, 2012, Florida's Governor signed a death warrant, which tells me the January 9, 2012 legal complaint I filed with Florida's Attorney General, requiring the halt to executions while the evidence of racketeering within Florida's legal community is prosecuted, was not given the ethical attention required of these two public servants. This dereliction of duty on their part leaves them open to the change of being complicit in the criminal activity of racketeering...

The question now becomes: are these simply the ramblings of a madman on death row, or is there validity to the evidence of racketeering within Florida's legal community? On February 15, 2012 a death row inmate was executed here in the name of the Go fearing people of Florida, despite the legality of my January filed complaint. This dereliction by the Governor, and Attorney General, should not be allowed to go unpunished. Neither of these public servants, sworn to uphold the integrity of the law, are above the law! They must be prosecuted, or my January legal complaint proven to not have merit...

I understand there is very little sympathetic outcry to stop executions. Most could care less if someone convicted of murder is executed. This the apathetic world we live in, and a problem I have faced for nearly 3 years as an innocent on Florida's death row. If I continue to fail to gain the support of anti-death penalty causes from around the world to bring an end to the obstruction of justice taking place in my case to oppress and suppress the evidence of my innocence of any kind of murder. I will soon find myself strapped to Florida's gurney of death, as poison is pumped through my body. While those guilty of my premeditated murder go unpunished and the serial killing machine of Florida's racketeers continues to shine with the false light of Christ fulfilling the prophesy of those Jesus speaks of in (Matthew 7:21-23)

"Not everyone who says to me, 'Lord, Lord', will enter the kingdom of heaven. Many will say to me on that day, 'Lord, Lord' did we not prophesy in your name, and in your name drove out demons and perform many miracles? Then I will say to them plainly, I never knew you. Away from me, you evildoers!"

The dereliction of duty shown by Florida's Governor, and Attorney General, in failing to halt executions until the evidence of my complaint of racketeering within the ranks of Florida's legal community has been prosecuted, means these two public servants are numbered among the evil-doers. For they are supposed to be vanguards in protecting the integrity of the law, but instead have abused their positions to become vanguards in protecting those violating the law.

I am innocent of any kind of murder, with the evidence of my not receiving a fair and impartial trial being overwhelming. The only reason this evidence has not been used to vindicate me is due to a criminal element operating within Florida's legal community, working together to oppress and suppress the evidence of their evildoing. Without worldwide collective support to bring an end to the 51 million dollar a year criminal enterprise operating within Florida's legal community, I will not be vindicated, and expect my death warrant will soon be signed. You can help me; and bring an end to Florida's use of the death penalty through asking the following question. WHY IS THE EVIDENCE OF CORRUPTION WITHIN FLORIDA'S LEGAL COMMUNITY NOT BEING PROSECUTED AND DEATH WARRANTS STILL BEING SIGNED? If enough people ask this question the power of righteousness will overcome those guilty of evildoing! I have faith in that...

Thank you, for reading my blog and please share this message with all you feel can, and will be of support.