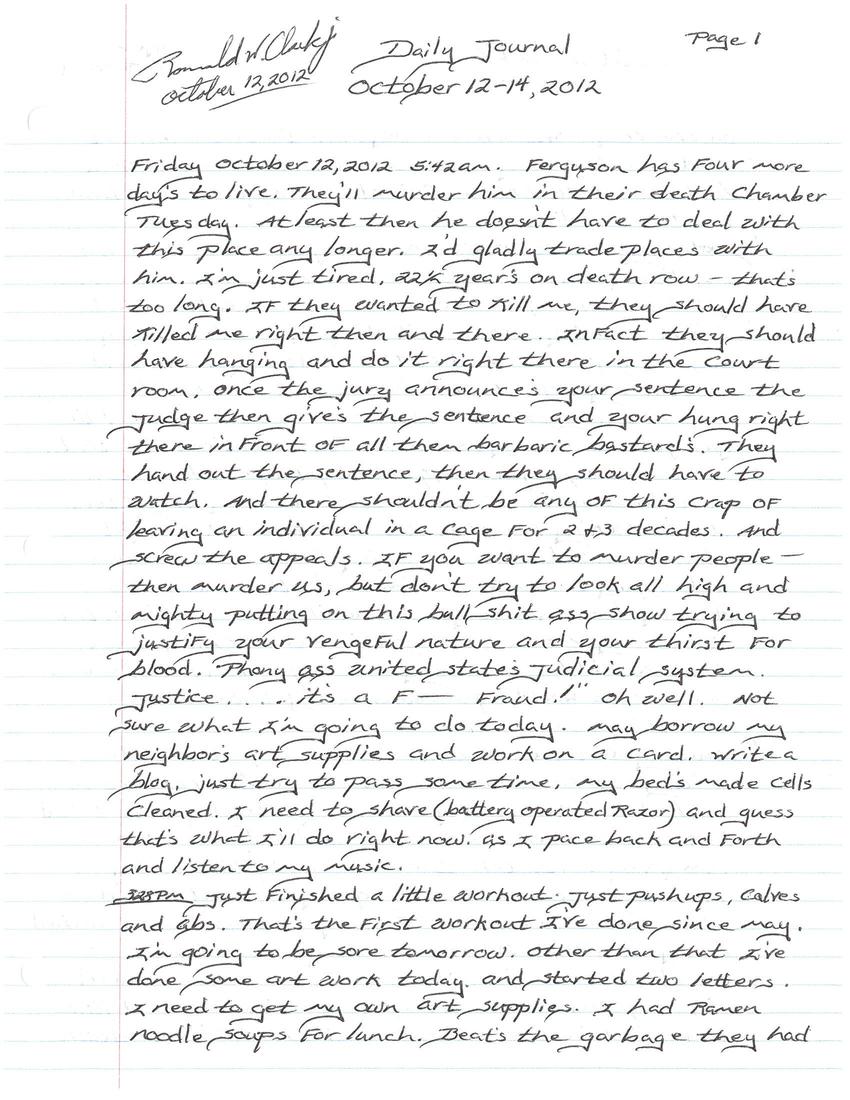 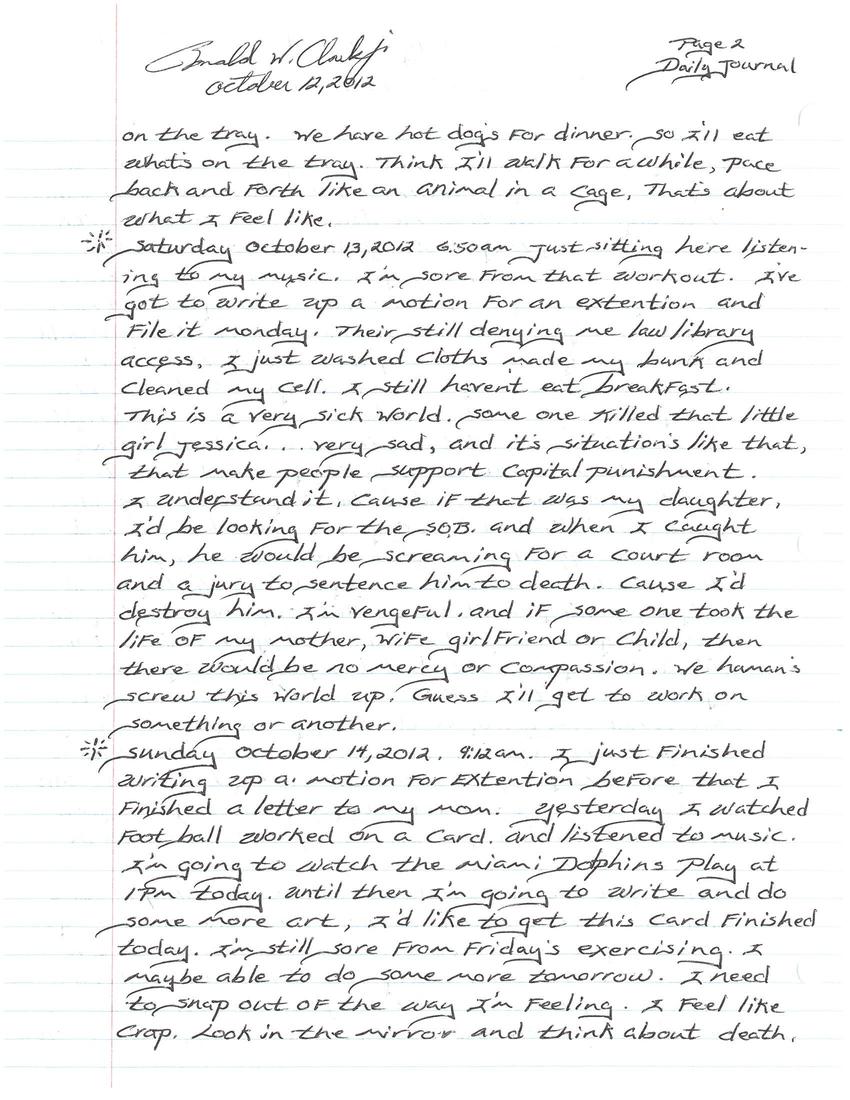 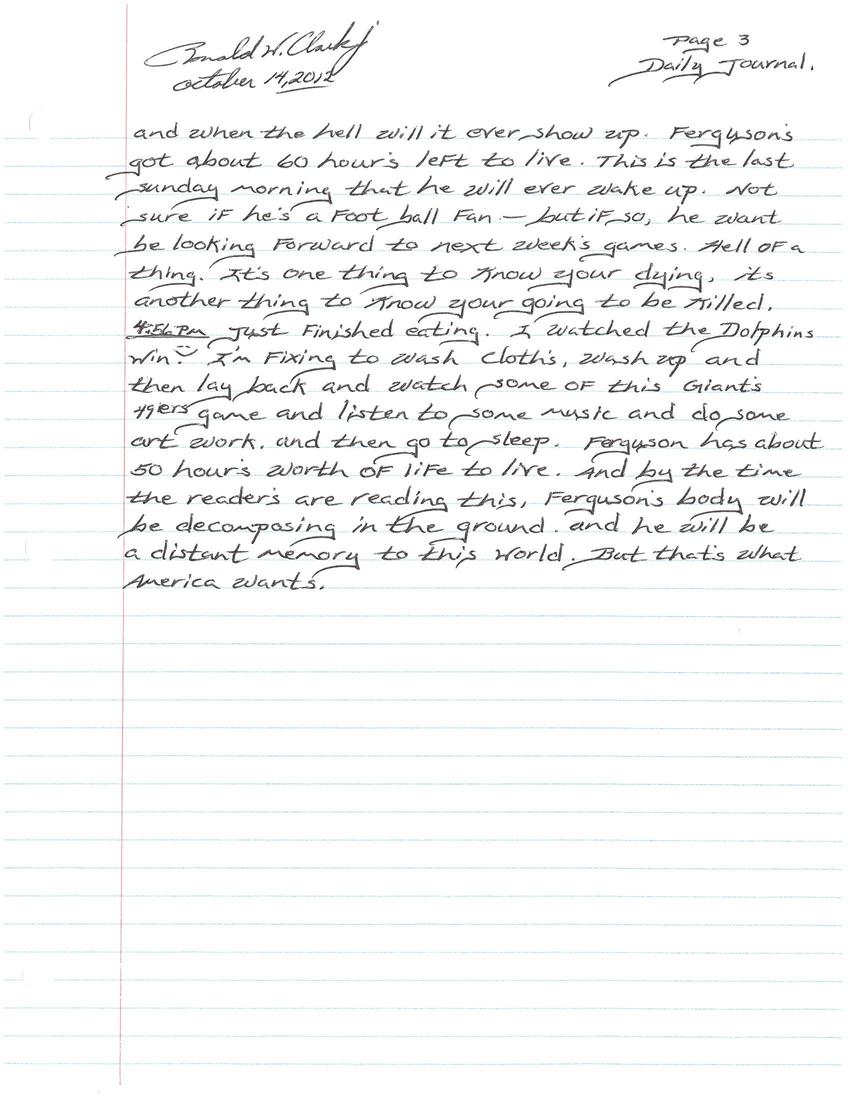 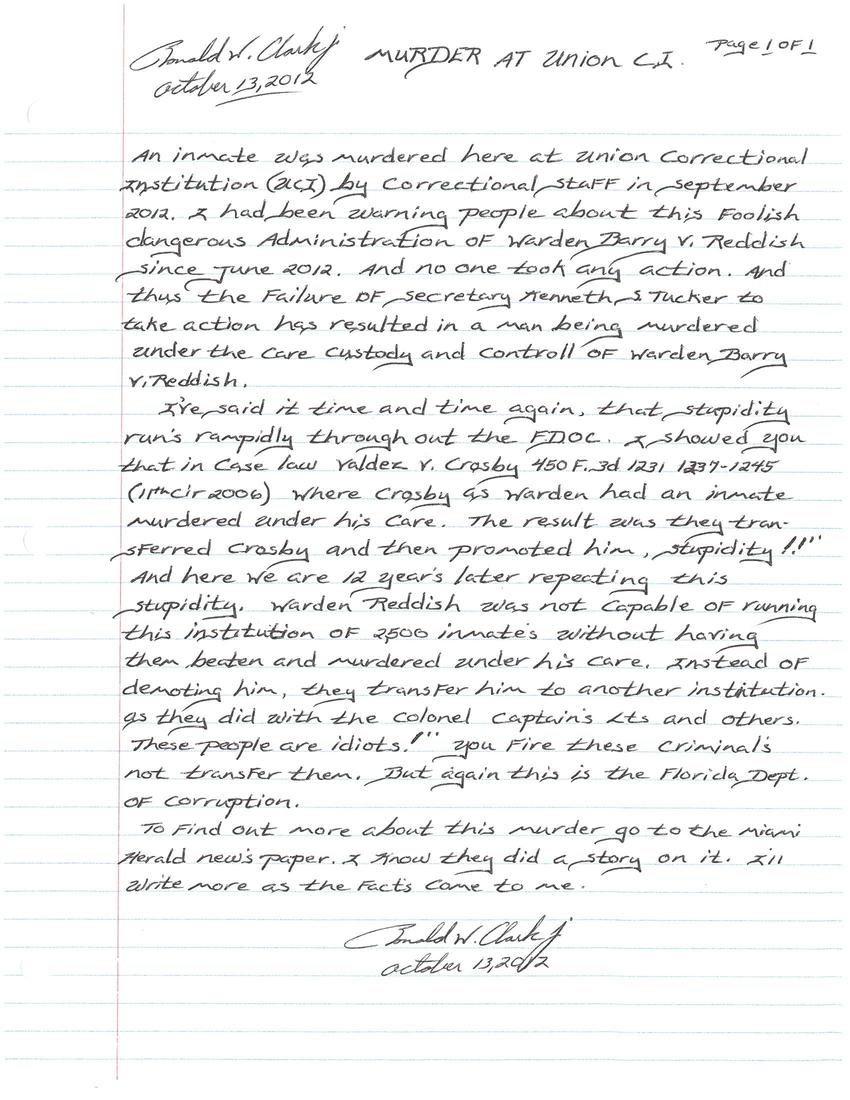 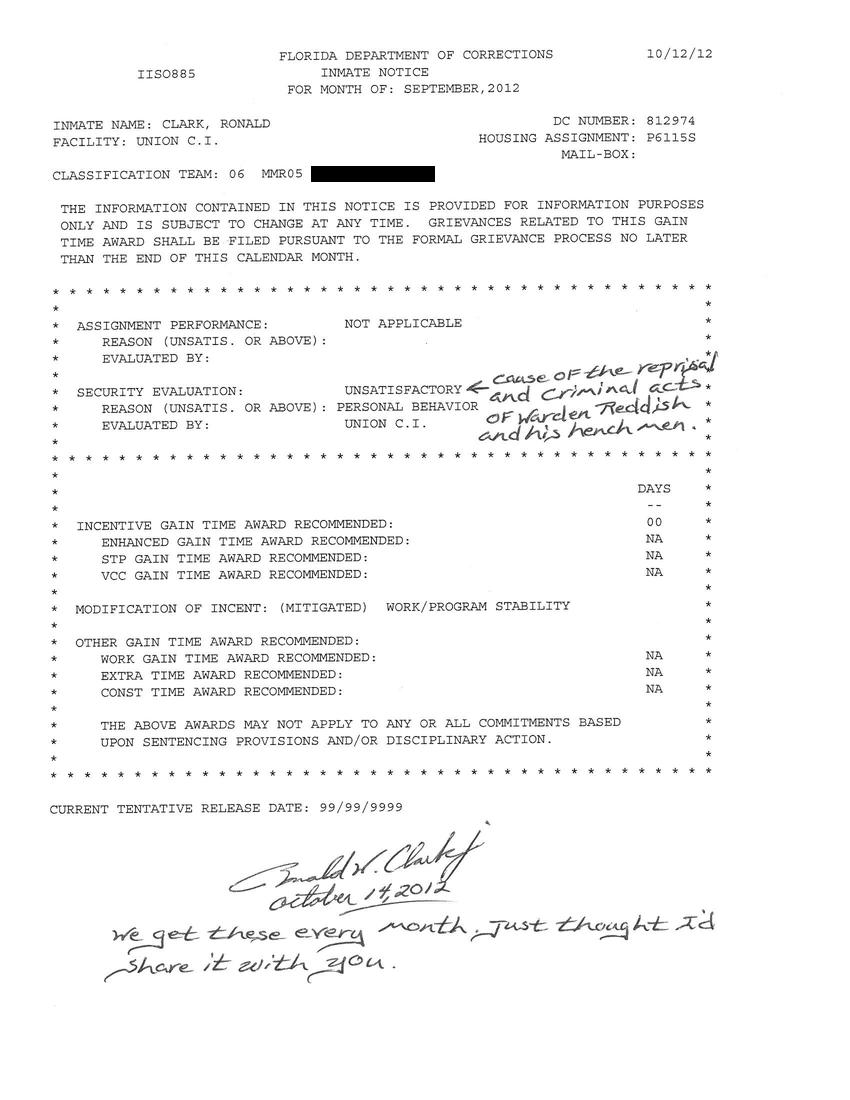 Friday October 12, 2012 5:42am: Ferguson has four more days to live. They'll murder him in their death chamber Tuesday. At least then he doesn't have to deal with this place any longer. I'd gladly trade places with him. I'm just tired, 22 1/2 years on death row - that's too long. If they wanted to kill me, they should have killed me right then and there... in fact they should have hanging and do it right there in the court room. Once the jury announces your sentence, the judge then gives the sentence and you're hung right there in front of all them barbaric bastards. They hand out the sentence, then they should have to watch. And there shouldn't be any of this crap of leaving an individual in a cage for 2 + 3 decades. And screw the appeals. If you want to murder people - then murder us, but don't try to look all high and mighty putting on this bullshit ass show trying to justify your vengeful nature and your thirst for blood. Phony ass United States judicial system. Justice... it's a f- fraud! Oh well. Not sure what I'm going to do today. May borrow my neighbor's art supplies and work on a card, write a blog, just try to pass some time. My bed's made, cell's cleaned. I need to shave (battery operated razor) and guess that's what I'll do right now, as I pace back and forth and listen to my music.
3:28pm: Just finished a little workout. Just pushups, calves and abs. That's the first workout I've done since May. I'm going to be sore tomorrow. Other than that I've done some artwork today, and started two letters. I need to get my own art supplies. I had ramen noodle soups for lunch. Beats the garbage they had on the tray. We have hot dogs for dinner, so I'll eat what's on the tray. Think I'll walk for awhile, pace back and forth like an animal in a cage. That's about what I feel like.

Saturday October 13, 2012 6:50am: Just sitting here listening to my music. I'm sore from that workout. I've got to write up a motion for an extension and file it Monday. They're still denying me law library access. I just washed clothes, made my bunk and cleaned my cell. I still haven't eat breakfast. This is a very sick world. Someone killed that little girl Jessica... very sad, and it's situations like that, that make people support capital punishment. I understand it, 'cause if that was my daughter, I'd be looking for the SOB and when I caught him, he would be screaming for a court room and a jury to sentence him to death. 'Cause I'd destroy him. I'm vengeful, and if someone took the life of my mother, wife, girlfriend or child, then there would be no mercy or compassion. We humans screw this world up. Guess I'll get to work on something or another.

Sunday October 14, 2012 9:12am: I just finished writing up a motion for extension, before that I finished a letter to my mom. Yesterday I watched football, worked on a card, and listened to music. I'm going to watch the Miami Dolphins play at 1pm today. Until then I'm going to write and do some more art, I'd like to get this card finished today. I'm still sore from Friday's exercising. I may be able to do some more tomorrow. I need to snap out of the way I'm feeling. I feel like crap. Look in the mirror and think about death. And when the hell will it ever show up. Ferguson's got about 60 hours left to live. This is the last Sunday morning that he will ever wake up. Not sure if he's a football fan - but if so, he won't be looking forward to next week's games. Hell of a thing. It's one thing to know you're dying, it's another thing to know you're going to be killed.
4:56pm: Just finished eating. I watched the Dolphins win. :) I'm fixing to wash clothes, wash up and then lay back and watch some of this Giants-49ers game and listen to some music and do some artwork, and then go to sleep. Ferguson has about 50 hours worth of life to live. And by the time the readers are reading this, Ferguson's body will be decomposing in the ground, and he will be a distant memory to this world. But that's what America wants.

An inmate was murdered here at Union Correctional Institution (UCI) by correctional staff in September 2012. I had been warning people about this foolish dangerous administration of Warden Barry V. Reddish since Junes 2012. And no one took any action. And thus the failure of Secretary Kenneth S. Tucker to take action has resulted in a man being murdered under the care, custody and control of Warden Barry V. Reddish.

I've said it time and time again, that stupidity runs rampantly throughout the FDOC. I showed you that in case law Valdez v. Crosby 450 F.3d 1231 1237-1245 (11th Cir 2006) where Crosby as Warden had an inmate murdered under his care. The result was they transferred Crosby and then promoted him, stupidity!! And here we are 12 years later repeating this stupidity. Warden Reddish was not capable of running this institution of 2,500 inmates without having them beaten and murdered under his care. Instead of demoting him, they transfer him to another institution, as they did with the colonel, captains, Lts and others. These people are idiots! You fire these criminals, not transfer them. But again, this is the Florida Dept of Corruption.

To find out more about this murder, go to the Miami Herald newspaper. I know they did a story on it. I'll write more as the facts come to me.

We get these every month. Just thought I'd share it with you.

They should carry out a death sentence at once?
Right in the court?

I don´t think the ones that have later been released because of innocence would share your opinion..... ;-)
(scanned reply – view as blog post)
uploaded Dec. 31, 2012.  Original (PDF) 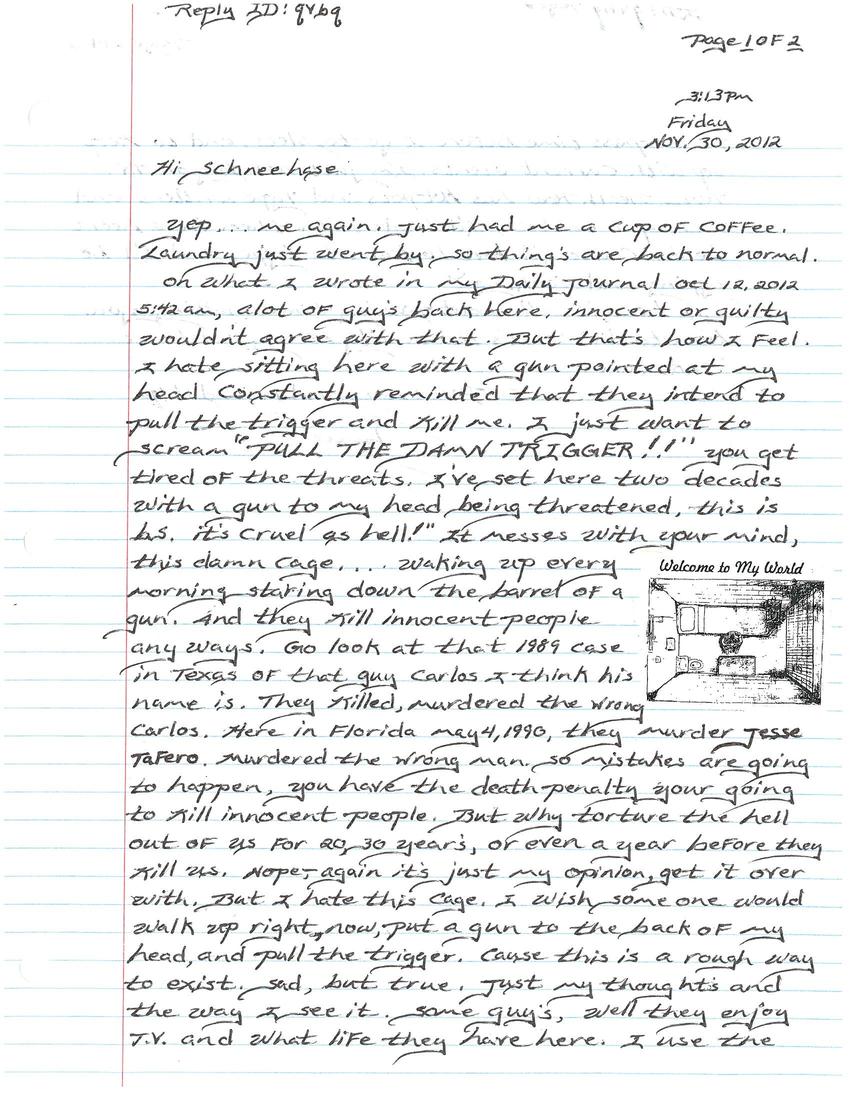 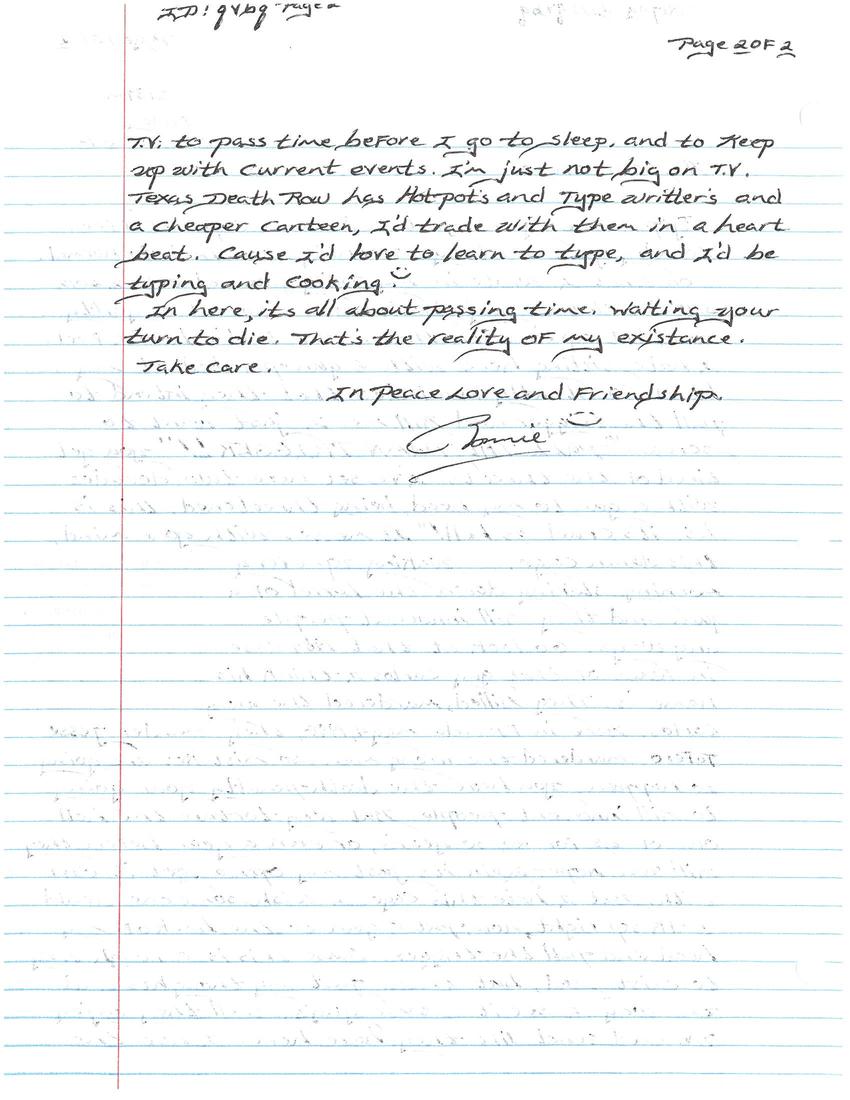 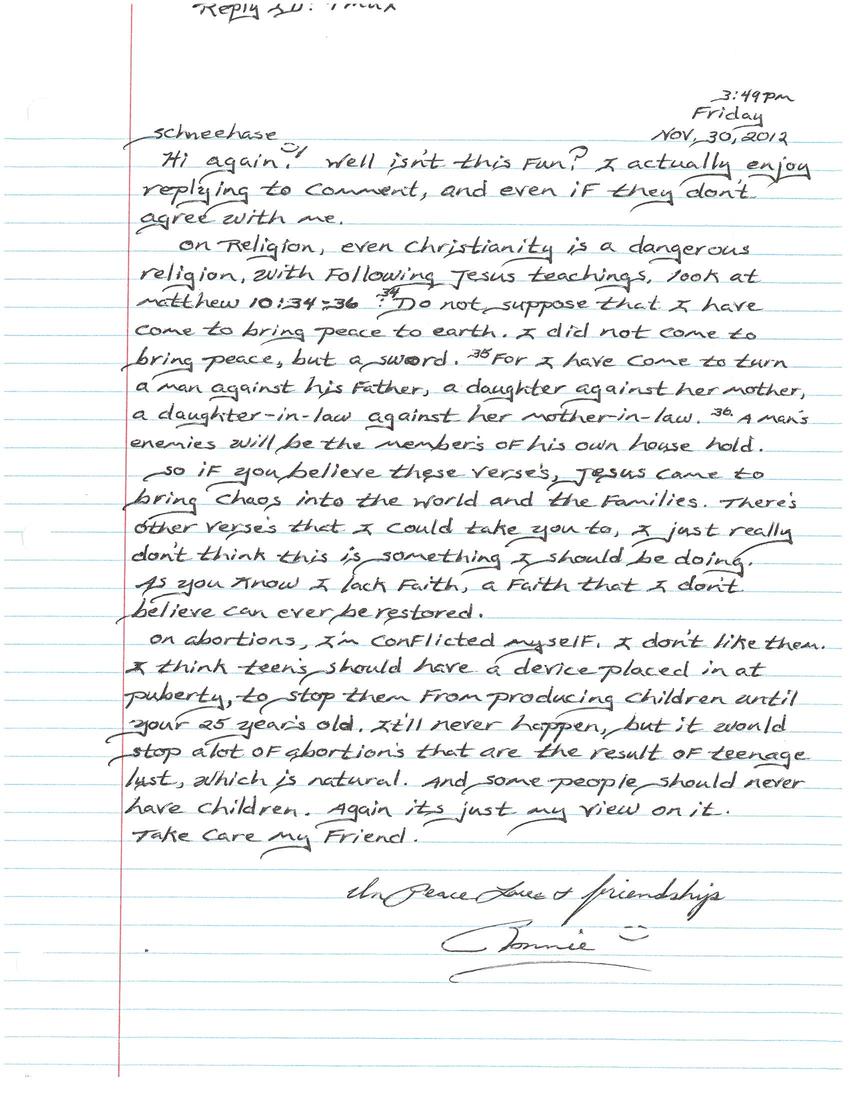 Oh, I don´t think religion opponents mean THAT with the sentence "religion is dangerous".

I have alot of discussions with my colleagues on that topic....and no, it´s not that I´m seeking them. ;-)
It´s always that nonsense of "religion is the root of all evil" and "all wars were because of religion".

I always reply that Stalin was not a religious person, Hitler wasn´t and Pol Pot wasn´t either....
Last time I got the answer that THOSE were dictators and not atheists (nonsense....they were both). Besides the Holocaust, they said, WAS about religion, that is, the Jewish one....
But first, Hitler didn´t consider the Jews what they are - a religion - but a race (Edith Stein was brought to concentration camp and killed although she became Catholic....because of her Jewish roots; if Hitler had considered it a religion, he would have had to spare her because she wasn´t Jewish anymore....)
Second, the religious part was the religion of the VICTIMS and do they really and seriously want to forbid the VICTIMS to believe what they want....?

But you made a good point, religion is dangerous as far as the faithful have to suffer.
On the other hand....
it´s dangerous to live at all, isn´t it?
Unfortunately we´re not in paradise yet.....

And I don´t think it was Jesus´ wish to bring chaos into the world. I assume he´d have preferred people living united according to what he taught them.
He simply knew that this wouldn´t happen so he prepared his followers for all the suffering that was coming up to them.