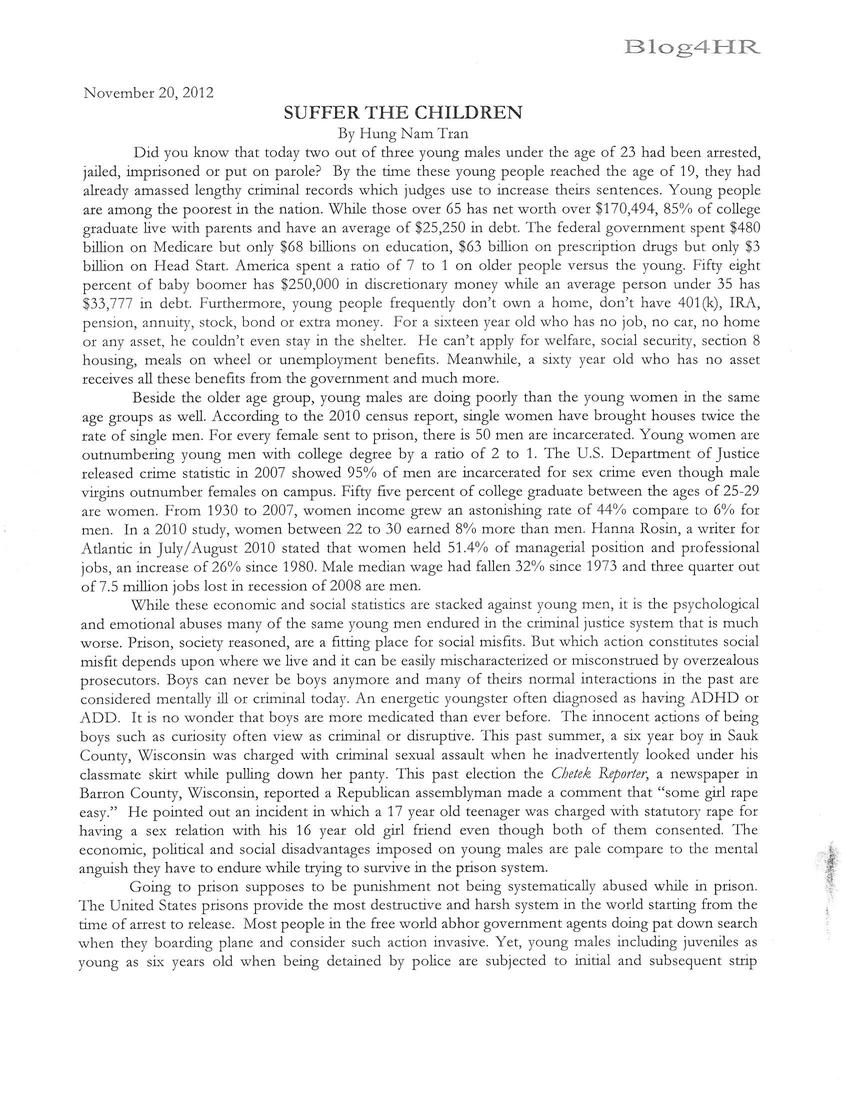 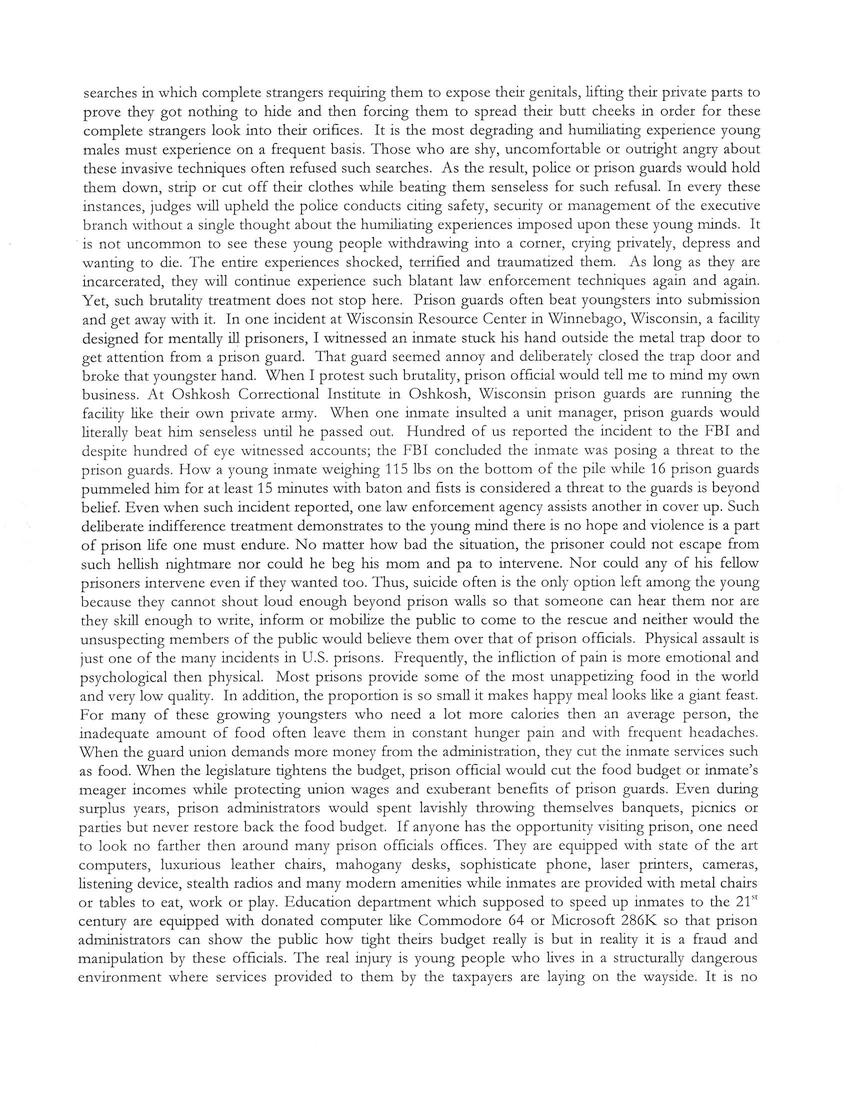 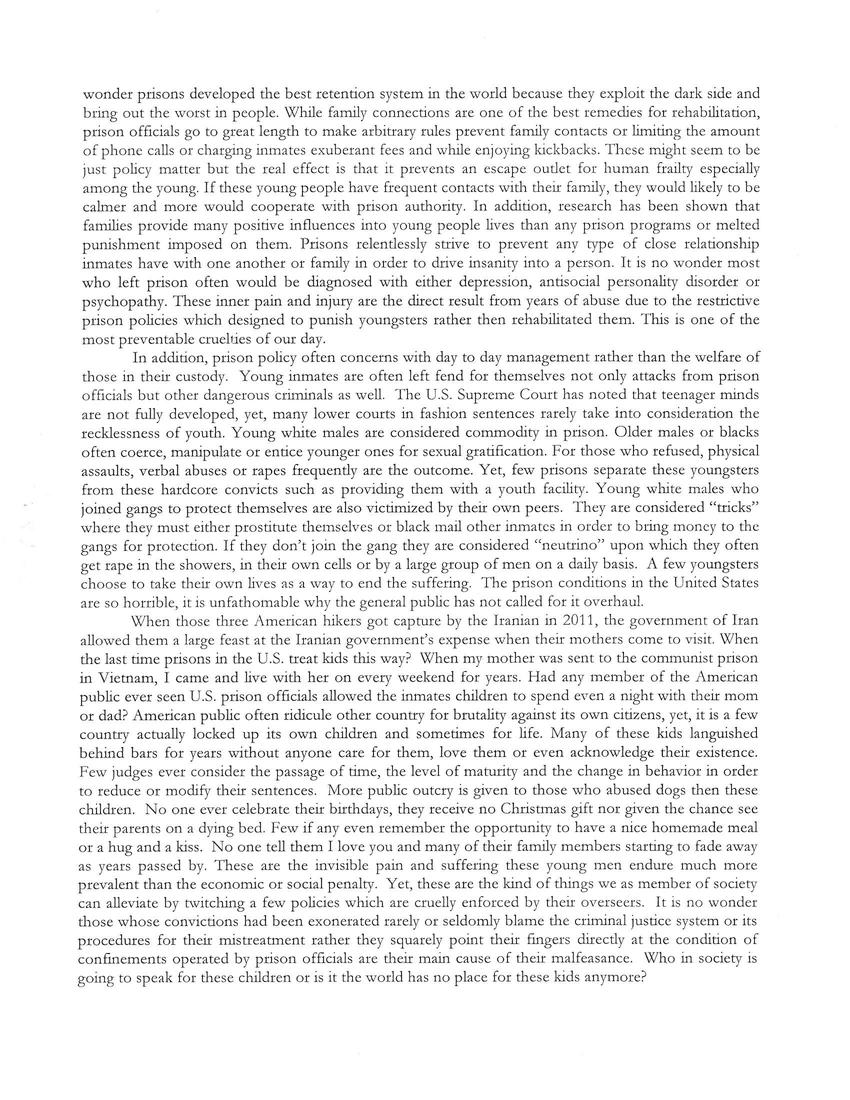 Did you know that today two out of three young males under the age of 23 had been arrested, jailed, imprisoned or put on parole? By the time these young people reached the age of 19, they had already amassed lengthy criminal records which judges use to increase their sentences. Young people are among the poorest in the nation. While those over 65 has net worth over $170,494, 85% of college graduates live with parents and have an average of $25,250 in debt. The federal government spent $480 billion on Medicare but only $68 billion on education, $63 billion on prescription drugs but only $3 billion on Head Start. America spent a ratio of 7 to 1 on older people versus the young. Fifty eight percent of baby boomers has $250,000 in discretionary money while an average person under 35 has $33,777 in debt. Furthermore, young people frequently don't own a home, don't have 401(k), IRA, pension, annuity, stock, bond or extra money. For a sixteen year old who has no job, no car, no home or any asset, he couldn't even stay in the shelter. He can't apply for welfare, social security, section 8 housing, meals on wheels or unemployment benefits. Meanwhile, a sixty year old who has no asset receives all these benefits from the government and much more.

Beside the older age group, young males are doing poorly than the young women in the same age groups as well. According to the 2010 census report, single women have bought houses twice the rate of single men. For every female sent to prison, there is 50 men are incarcerated. Young women are outnumbering young men with college degrees by a ratio of 2 to 1. The U.S. Department of Justice released crime statistics in 2007 showed 95% of men are incarcerated for sex crimes even though male virgins outnumber females on campus. Fifty five percent of college graduates between the ages of 25-29 are women. From 1930 to 2007, women's income grew an astonishing rate of 44% compared to 6% for men. In a 2010 study, women between 22 to 30 earned 8% more than men. Hanna Rosin, a writer for Atlantic in July/August 2010 stated that women held 51.4% of managerial positions and professional jobs, an increase of 26% since 1980. Male median wage had fallen 32% since 1973 and three quarters out of 7.5 million jobs lost in recession of 2008 are men.

While these economic and social statistics are stacked against young men, it is the psychological and emotional abuses many of the same young men endured in the criminal justice system that is much worse. Prisons, society reasoned, are a fitting place for social misfits. But which action constitutes social misfit depends upon where we live and it can be easily mischaracterized or misconstrued by overzealous prosecutors. Boys can never be boys anymore and many of their normal interactions in the past are considered mentally ill or criminal today. An energetic youngster often diagnosed as having ADHD or ADD. It is no wonder that boys are more medicated than ever before. The innocent actions of being boys such as curiosity often viewed as criminal or disruptive. This past summer, a six year old boy in Sauk County, Wisconsin was charged with criminal sexual assault when he inadvertently looked under his classmate's skirt while pulling down her panty. This past edition the Chetek Reporter, a newspaper in Barron County, Wisconsin, reported a Republican assemblyman made a comment that "some girls rape easy". He pointed out an incident in which a 17 year old teenager was charged with statutory rape for having a sex relation with his 16 year old girlfriend even though both of them consented. The economic, political and social disadvantages imposed on young males are pale compared to the mental anguish they have to endure while trying to survive in the prison system.

In addition, prison policy often concerns with day to day management rather than the welfare of those in their custody. Young inmates are often left to fend for themselves not only attacks from prison officials but other dangerous criminals as well. The U.S. Supreme Court has noted that teenager minds are not fully developed, yet, many lower courts in fashioning sentences rarely take into consideration the recklessness of youth. Young white males are considered a commodity in prison. Older males or blacks often coerce, manipulate or entice younger ones for sexual gratification. For those who refused, physical assaults, verbal abuses or rapes frequently are the outcome. Yet, few prisons separate these youngsters from these hardcore convicts, such as providing them with a youth facility. Young white males who joined gangs to protect themselves are also victimized by their own peers. They are considered "tricks" where they must either prostitute themselves or blackmail other inmates in order to bring money to the gangs for protection. If they don't join the gang they are considered "neutrino" upon which they often get raped in the showers, in their own cells or by a large group of men on a daily basis. A few youngsters choose to take their own lives as a way to end the suffering. The prison conditions in the United States are so horrible, it is unfathomable why the general public has not called for its overhaul.

When those three American hikers got captured by the Iranians in 2011, the government of Iran allowed them a large feast at the Iranian government's expense when their mothers come to visit. When was the last time prisons in the U.S. treat kids this way? When my mother was sent to the communist prison in Vietnam, I came and lived with her on every weekend for years. Had any member of the American public ever seen U.S. prison officials allowed the inmates' children to spend even a night with their mom or dad? American public often ridicule other country for brutality against its own citizens, yet, it is a few country actually locked up its own children and sometimes for life. Many of these kids languished behind bars for years without anyone to care for them, love them or even acknowledge their existence. Few judges ever consider the passage of time, the level of maturity and the change in behavior in order to reduce or modify their sentences. More public outcry is given to those who abused dogs than these children. No one ever celebrates their birthdays, they receive no Christmas gift not given the chance to see their parents on a dying bed. Few if any even remember the opportunity to have a nice homemade meal or a hug and a kiss. No one tells them I love you and many of their family members starting to fade away as years passed by. These are the invisible pain and suffering these young men endure much more prevalent than the economic or social penalty. Yet, these are the kind of things we as member of society can alleviate by twitching a few policies which are cruelly enforced by their overseers. It is no wonder those whose convictions had been exonerated rarely or seldomly blame the criminal justice system or its procedures for their mistreatment, rather they squarely point their fingers directly at the condition of confinements operated by prison officials are their main cause of their malfeasance. Who in society is going to speak for these children or is it the world has no place for these kids anymore?