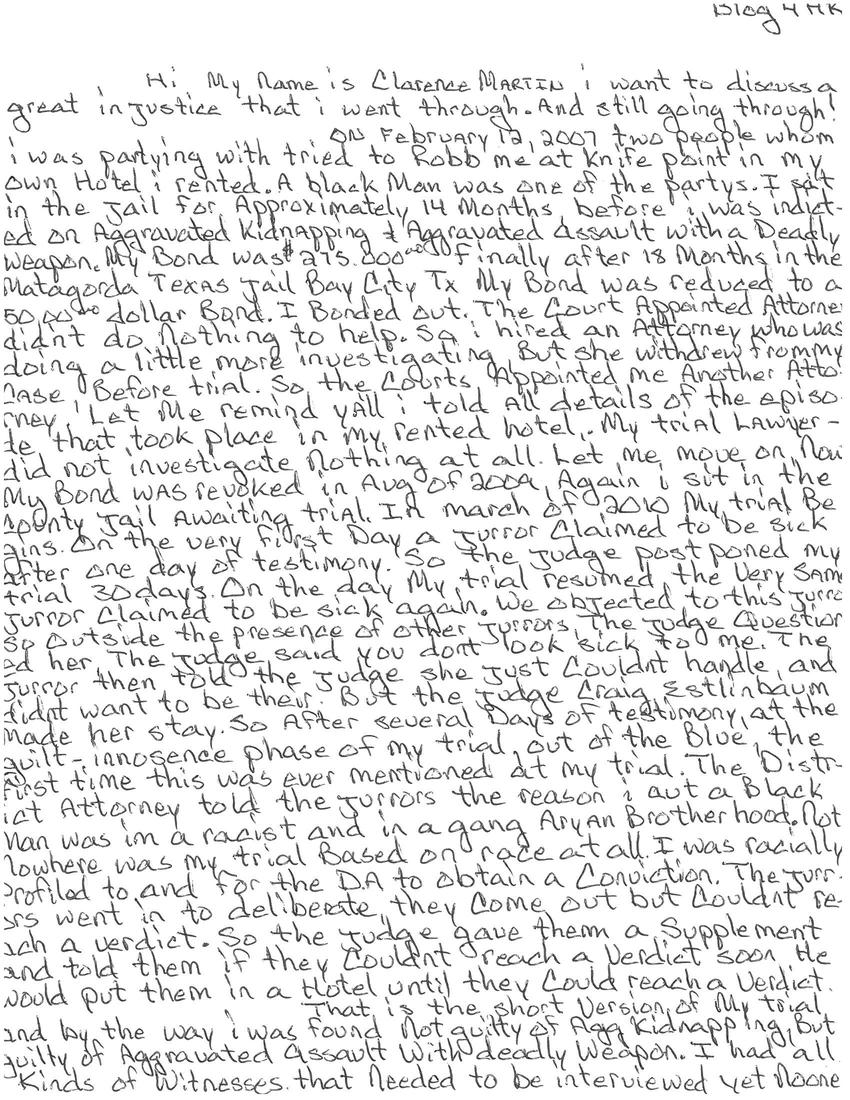 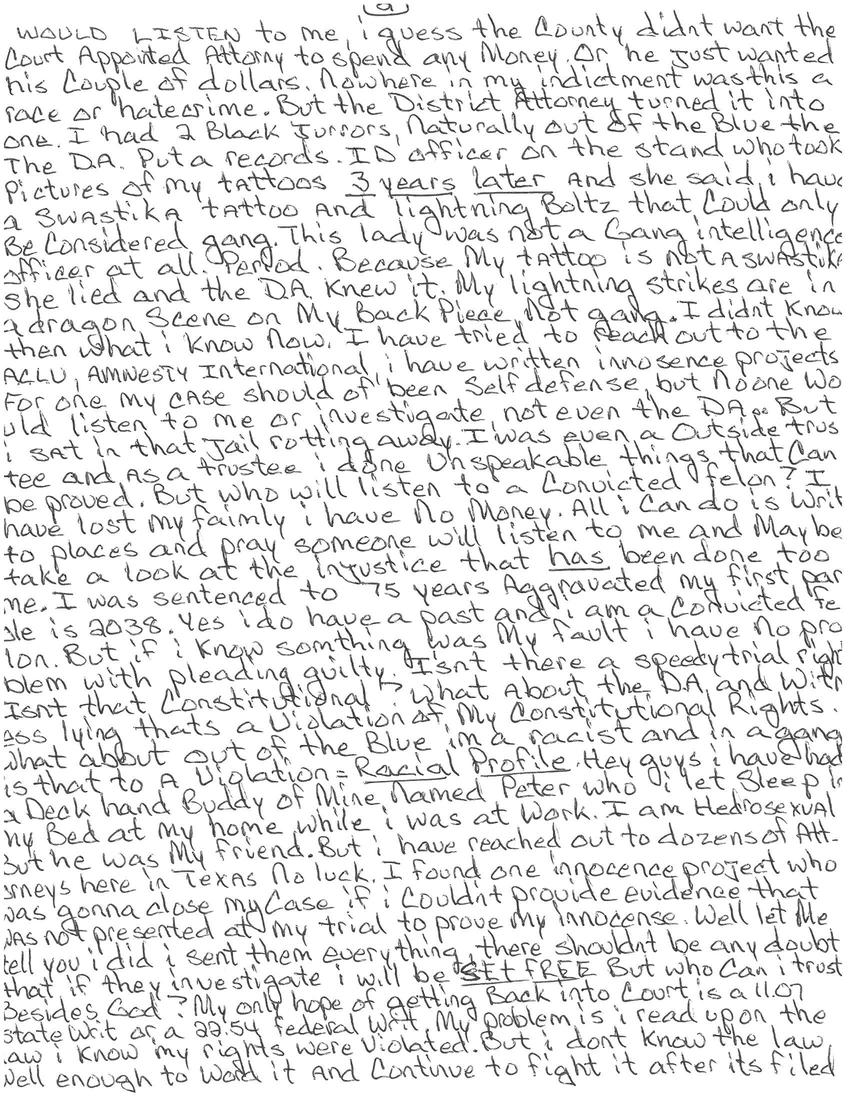 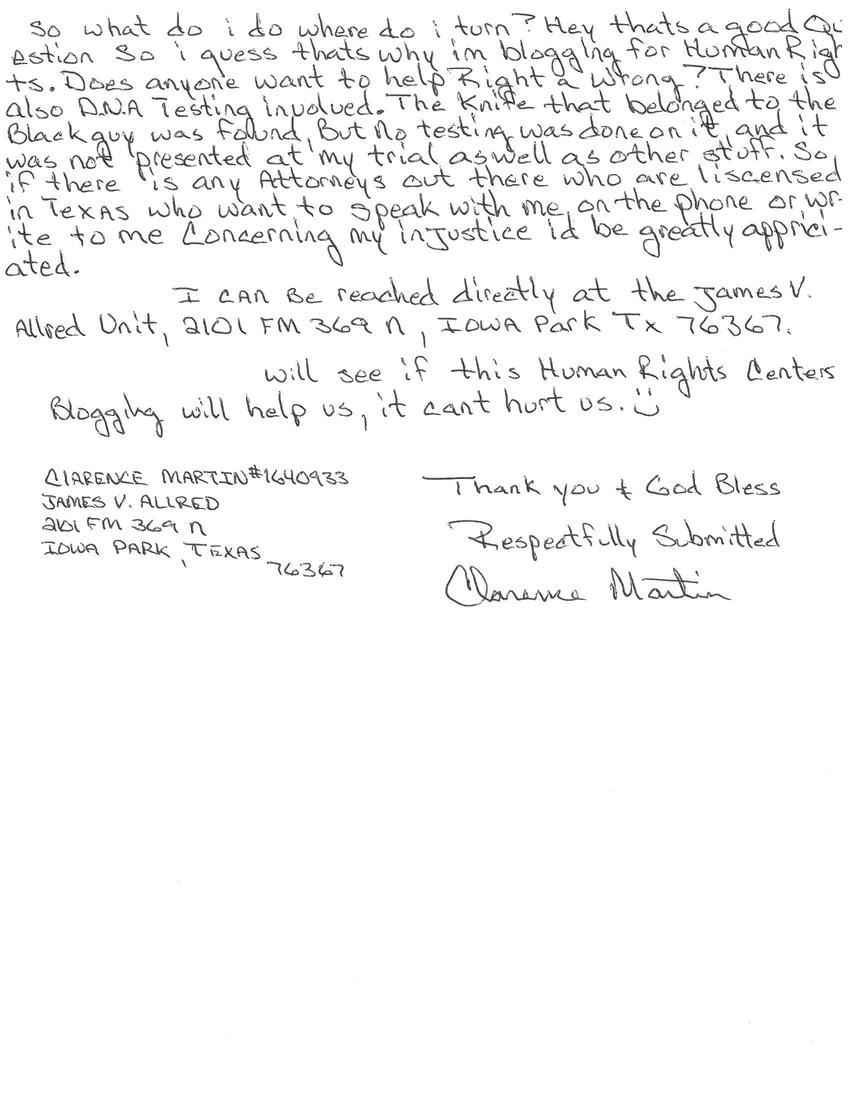 Hi, my name is Clarence Martin. I want to discuss a great injustice that I went through. And still going through!

On February 12, 2007, two people whom I was partying with tried to rob me at knife point in my own hotel I rented. A black man was one of the parties. I sat in the jail for approximately 14 months before I was indicted on aggravated kidnapping & aggravated assault with a deadly weapon. My bond was $275,000.00. Finally after 18 months in the Matagorda Texas jail, Bay City, TX, my bond was reduced to a $5000.00 bond. I bonded out. The court appointed attorney didn't do nothing to help. So I hired an attorney who was doing a little more investigating. But she withdrew from my case, before trial. So the courts appointed me another attorney. Let me remind y'all, I told all details of the episode that took place in my rented hotel. My trial lawyer - did not investigate nothing at all. Let me move on now. My bond was revoked in Aug of 2009, again I sit in the county jail awaiting trial. In March of 2010, my trial begins. On the very first day, a juror claimed to be sick after one day of testimony. So the judge postponed my trial 30 days. On the day my trial resumed, the very same juror claimed to be sick again. We objected to this juror so outside the presence of other jurors, the judge questioned her. The judge said, you don't look sick to me. The juror then told the judge she just couldn't handle and didn't want to be there. But the judge, Craig Estlinbaum, made her stay. So after several days of testimony, at the guilt + innocence phase of my trial, out of the blue, the first time this was ever mentioned at my trial. The District Attorney told the jurors the reason I cut a black man was I'm a racist and in a gang, Aryan Brotherhood. Not nowhere was my trial based on race at all. I was racially profiled to and for the DA to obtain a conviction. The jurors went in to deliberate, they come out but couldn't reach a verdict. So the judge gave them a supplement and told them if they couldn't reach a verdict soon, he would put them in a hotel until they could reach a verdict.

That is the short version of my trial and by the way, I was found not guilty of agg kidnapping, but guilty of aggravated assault with deadly weapon. I had all kinds of witnesses that needed to be interviewed yet no one would listen to me, I guess the county didn't want the court appointed attorney to spend any money. Or he just wanted his couple of dollars. Nowhere in my indictment was this a race or hate crime. But the District Attorney turned it into one. I had 2 black jurors, naturally out of the blue, the DA put a Records ID officer on the stand who took pictures of my tattoos. 3 YEARS LATER and she said I have a swastika tattoo and lightning bolts that could only be considered gang. This lady was not a gang intelligence officer at all. Period. Because my tattoo is not a swastika. She lied and the DA knew it. My lightning strikes are in a dragon scene on my back piece, not gang. I didn't know then what I know now. I have tried to reach out to the ACLU, Amnesty International, I have written Innocence Projects. For one, my case should have been self defense, but no one would listen to me or investigate, not even the DA. But I sat in that jail rotting away. I was even an outside trustee and as a trustee I done unspeakable things that can be proved. But who will listen to a convicted felon? I have lost my family, I have no money. All I can do is write to places and pray someone will listen to me, and maybe take a look at the injustice that HAS been done to me. I was sentenced to 75 years aggravated, my first parole is 2038. Yes, I do have a past and I am a convicted felon. But if I know something was my fault, I have no problem with pleading guilty. Isn't there a speedy trial right? Isn't that constitutional? What about the DA and witness lying, that's a violation of my constitutional rights. What about out of the blue I'm a racist and in a gang, is that too a violation? RACIAL PROFILE. Hey guys, I have had a deckhand buddy of mine named Peter who I let sleep in my bed at my home while I was at work. I am heterosexual but he was my friend. But I have reached out to dozens of attorneys here in Texas, no luck. I found one innocence project who was gonna close my case if I couldn't find evidence that was not presented at my trial to prove my innocence. Well, let me tell you, I did, I sent them everything, there shouldn't be any doubt that if they investigate I will be SET FREE. But who can I trust besides God? My only hope of getting back into court is an 11.07 state writ or a 22.54 federal writ. My problem is I read up on the law, I know my rights were violated. But I don't know the law well enough to word it and continue to fight it after it's filed. So what do I do, where do I turn? Hey, that's a good question, so I guess that's why I'm blogging for Human Rights. Does anyone want to help right a wrong? There is also DNA testing involved. The knife that belonged to the black guy was found, but no testing was done on it, and it was not presented at my trial as well as other stuff. So, if there is any attorneys out there who are licensed in Texas who want to speak with me on the phone or write to me concerning my injustice, I'd be greatly appreciated.

Will see if this Human Rights Centers blogging will help us, it can't hurt us. :)