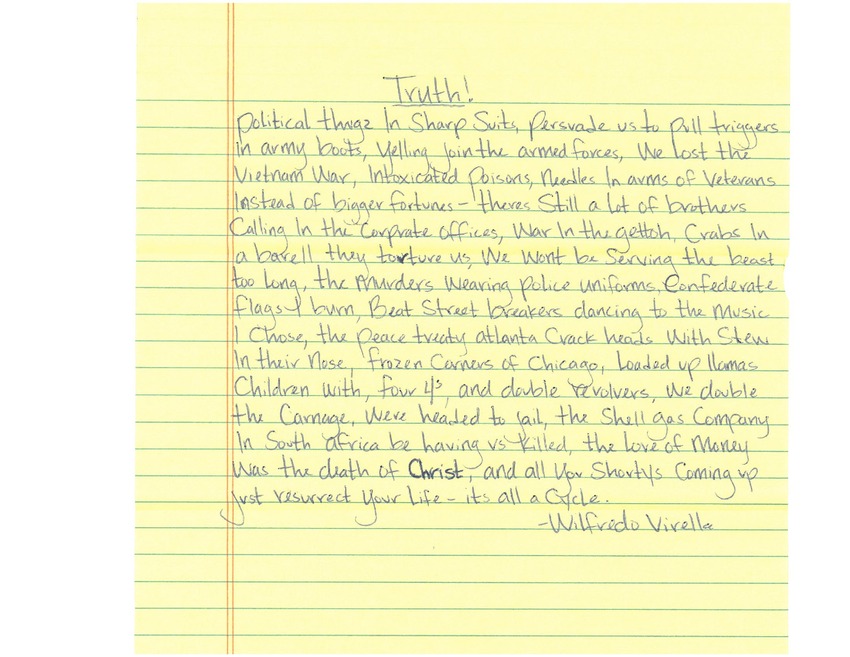 Political things in sharp suits persuade us to pull triggers. In army boots, yelling, "Join the armed forces," we lost the Vietnam War. Intoxicated poisons, needles in arms of veterans instead of bigger fortunes—there's still a lot of brothers calling in the corporate offices.

War in the ghetto, crabs in a barrel, they torture us. We won't be serving the beast too long, the murderers wearing police uniforms. Confederate flags, I burn. Beat street breakers dancing to the music I chose. The peace treaty Atlanta crack heads with stew in their nose. Frozen corners of Chicago, loaded up llamas, children with four 4s and double revolvers.

We double the carnage, we're headed to jail. The Shell gas company in South Africa be having us killed. The love of money was the death of Christ, and all you shorties coming up just resurrect your life. It's all a cycle.
—Wilfredo Virella

Hello Wil, my name is Kayla =]
Do you have acess to read messages from other people? Im interested in talking with you nd getting to know u a lil bit more.. Ill take down ur address and write to you, hopefully the address u posted here in june 13,2011 is the same on that you have now. Not sure if they have moved u to another place or not.. Look forward to hearing from you, you'll get a letter from me soon
Keep ur head up
Today is a world of pain for most. I have been reading blogs all morning and none have caught my eye. You seem so young to be were you are. I have no idea of the crime if there was one committed. I hope you hold your head up high and learn from the mistakes that brought you to were you are today. All we can do as human beings is grow and learn the best in what life can bring us. God bless you.
Hey Kayla thanks for reaching out I did not have access to the messages I kno it’s been years but thank u sweetheart
Hey kayla thanks for writing a long time ago I did not have access to the messages sorry sweetheart I’m out now feel free to hmu
Kayla77d message me will form truth my email is willvirella44@gmail.com