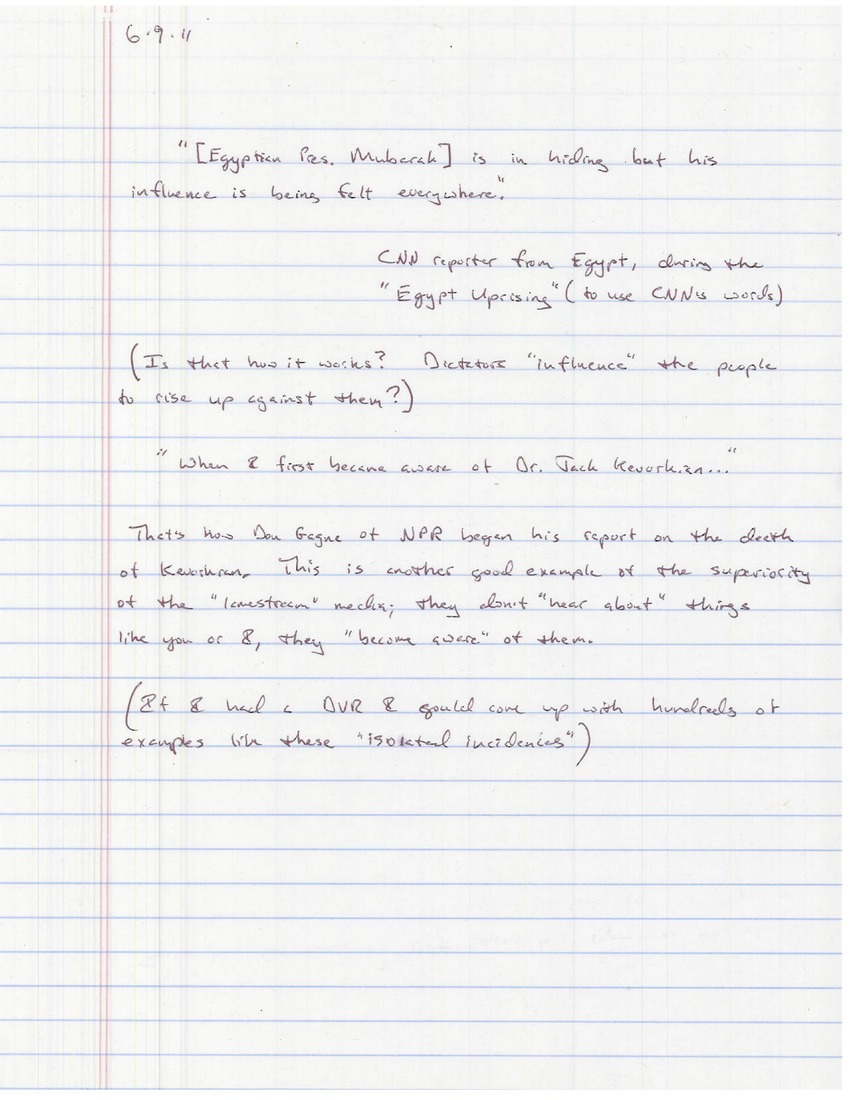 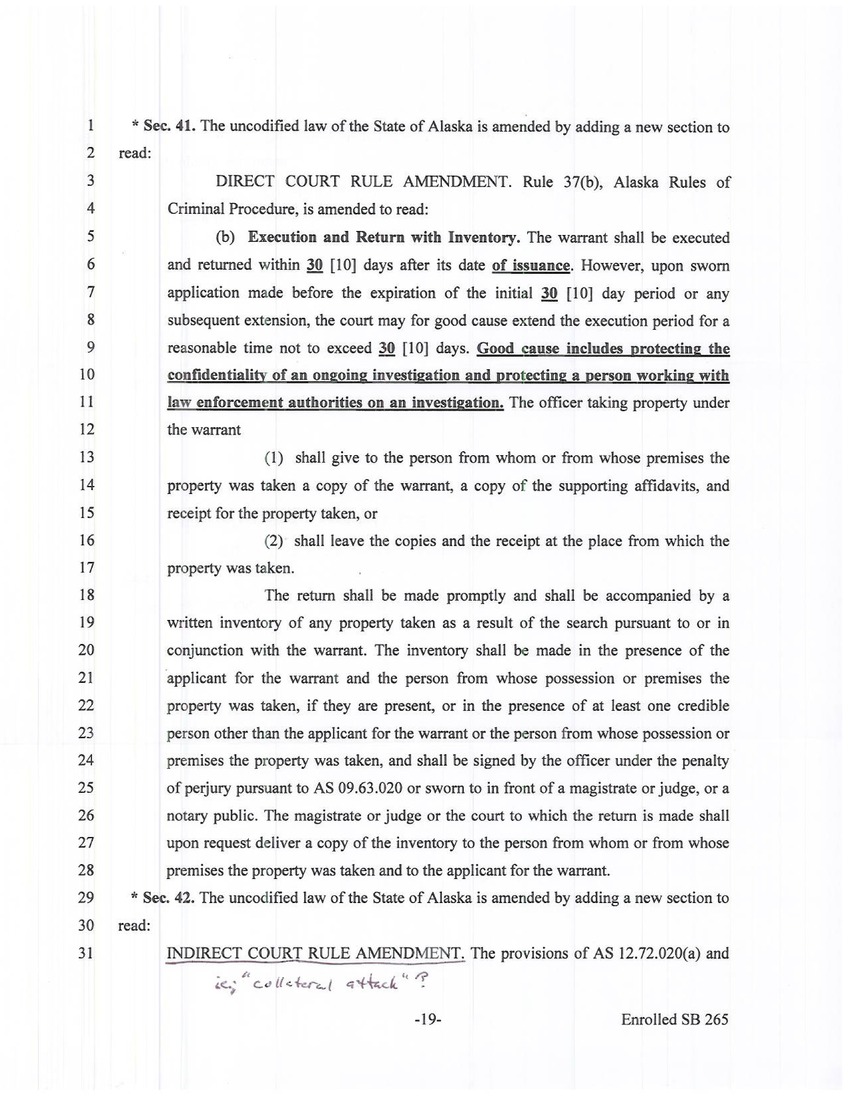 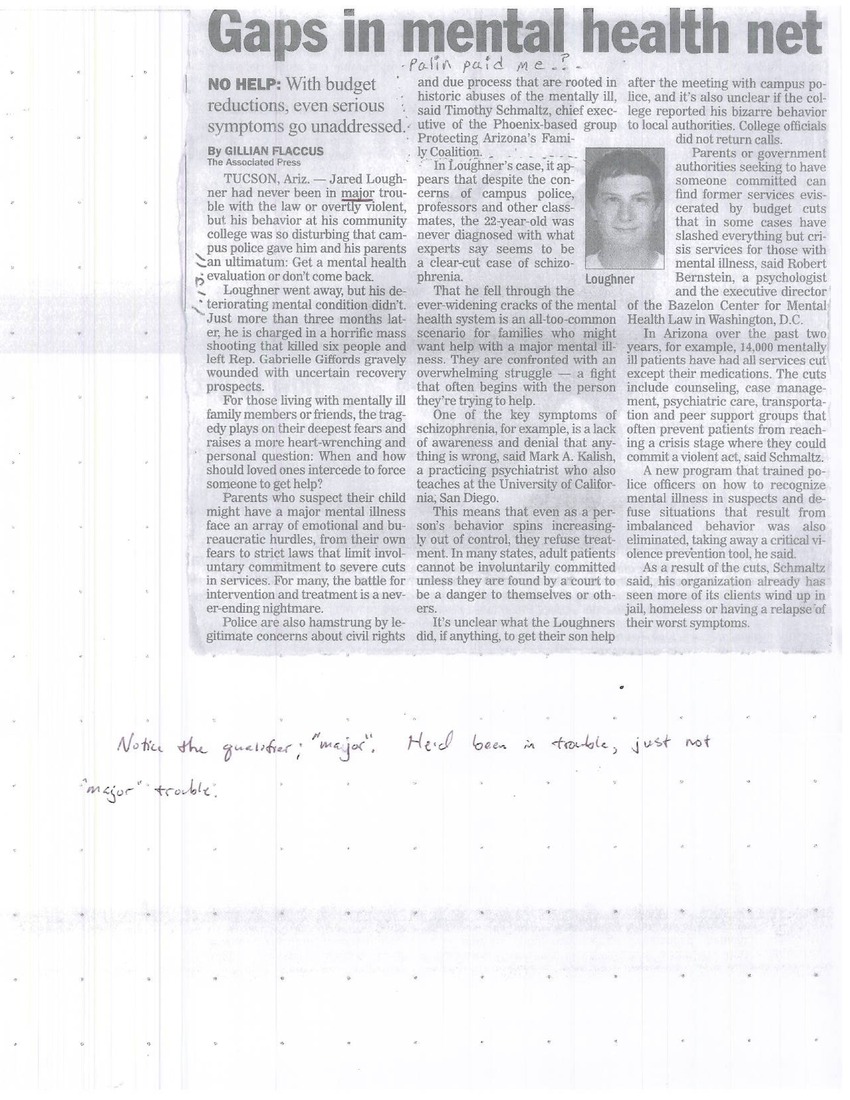 6-9-11
"[Egyptian Pres. Mubarack] is in hiding but his influence is being felt everywhere."
CNN reporter from Egypt during the "Egyptian Uprising" (to use CNN's words)

Is that how it works? Dictators "influence" the people to rise up against them?

"When I first became aware of Dr. Jack Kevorkian..."

That's how Dan Gogue at NPR began his report on the death of Kevorkian. This is another good example of the superiority of the "lamestream" media. They don't "hear about" things like you or me. They "become aware" of them.

If I had a DVR, I could come up with hundreds of examples like these "isolated incidences".

*Sec. 41. The uncodified law of the State of Alaska is amended by adding a new section to read:
DIRECT COURT RULE AMENDMENT. Rule 37(b), Alaska Rules of Criminal Procedure, is amended to read:
(b) Execution and Return with Inventory. The warrant shall be executed and returned within 30 [10] days after its date of issuance. However, upon sworn application made before the expiration of the initial 30 [10] day period or any subsequent extension, the court may for good cause extend the execution period for a reasonable time not to exceed 30 [10] days. Good cause includes protecting the confidentiality of an ongoing investigation and protecting a person working with law enforcement authorities on an investigation. The officer taking property under the warrant

*Sec. 42. The uncodified law of the State of Alaska is amended by adding a new section to read:
INDIRECT COURT RULE AMENDMENT. The provisions of AS 12.72.020(a) and
[poster's commentary: i.e. "Collateral attack?"]

Jared Loughner had never been in major trouble with the law or overtly violent, but his behavior at his community college was so disturbing that campus police gave him and his parents an ultimatum: Get a mental-health evaluation or don’t come back.

Loughner went away but his deteriorating mental condition didn’t. About three months later, he is charged in a mass shooting that killed six people and left Rep. Gabrielle Giffords, D-Ariz., gravely wounded.

For those living with mentally ill relatives or friends, the Arizona attack plays on their deepest fears and raises a more heart-wrenching and personal question: When and how should loved ones intercede to force someone to get help?

Parents who suspect their child might have a major mental illness face an array of hurdles, from their own fears to laws that limit involuntary commitment to severe cuts in services. For many, the battle for intervention and treatment is a never-ending nightmare.

“I would bet that every parent who has a son or daughter with schizophrenia or bipolar disorder or any major brain disorder all feel the same thing now: There but for the grace of God go I,” said the mother of a 35-year-old son with schizophrenia, who has been off his medication for nine years. The woman requested anonymity.

“My heart goes out to the family,” the mother said. “They didn’t cause this, you can’t cause a brain disorder in your family.”

Police are also hamstrung by concerns about civil rights and due process that are rooted in historic abuses of the mentally ill, said Timothy Schmaltz, chief executive of the Phoenix-based group Protecting Arizona’s Family Coalition.

In Loughner’s case, it appears that despite the concerns of campus police, professors and other classmates, the 22-year-old was never diagnosed with what some experts say seems to be a case of schizophrenia.

That he fell through the widening cracks of the mental-health system is an all-too-common scenario for families that might want help with a major mental illness. They are confronted with a fight that often begins with the person they’re trying to help.

One of the key symptoms of schizophrenia, for example, is a lack of awareness and denial that anything is wrong, said Mark Kalish, a psychiatrist who also teaches at the University of California, San Diego.

This means that as a person’s behavior spins out of control, he or she refuses treatment. In many states, adult patients cannot be involuntarily committed unless they are found by a court to be a danger to themselves or others.

The mother with the schizophrenic child said her son experienced his first symptoms at age 20. He endured two hospitalizations — one voluntary and one involuntary — and stopped taking his medicines, skipped his medical appointments and moved away from his home state.

His parents are powerless to intervene. They send him money each month, but long ago gave up pressuring him to take his medication in order to have any contact at all, his mother said. “Your hands are tied. If it happened when they were 16, you could take them to a hospital and admit them and they have nothing to say about it,” she said. “But once they’re legally an adult, it’s just a horrible thing to go through for the family.

“He doesn’t believe he has a mental illness at all.”

It’s unclear what the Loughners did to get their son help after the meeting with campus police.

After the Virginia Tech killings on April 16, 2007, the federal government set up teams from the Department of Education and the FBI to determine how to identify individuals whose behavior causes concern or is disruptive and assess whether the person has the intent or ability to carry out an attack.

The Virginia Tech shooter, Seung-Hui Cho, had been involuntarily committed to outpatient therapy by a judge before killing 32 people and himself.

Arizona has one of the most flexible statutes for involuntary commitment and allows anyone with knowledge of the person’s behavior — a teacher, a parent, a police officer, a friend — to petition for a court-ordered mental-health evaluation, the first step toward involuntary treatment, said Kristina Ragosta, legislative and policy counsel at the Treatment Advocacy Center in Arlington, Va.

Arizona law also doesn’t require the person to be homicidal or suicidal, but simply to be found “persistently and acutely disabled” by mental illness. “When we get phone calls from families looking to get help for a loved one, the first thing we always say is, ‘Know what the laws are in your state, know what are the standards for commitment,’ ” Ragosta said.

But even within the context of a flexible law, parents or government authorities seeking to have someone committed find services eviscerated by budget cuts that in some cases have slashed everything but crisis services for those with mental illness, said Robert Bernstein, a psychologist and executive director of the Bazelon Center for Mental Health Law in Washington, D.C.

In Arizona in the past two years, for example, 14,000 mentally ill patients have had all services cut except for their medications. The cuts include counseling, case management, psychiatric care, transportation and peer-support groups that often prevent patients from reaching a crisis stage where they could commit a violent act, said Schmaltz.

A new program that trained police officers on how to recognize mental illness in suspects and defuse situations that result from unbalanced behavior was also eliminated, he said.

A new program that trained police officers on how to recognize mental illness in suspects and defuse situations that result from unbalanced behavior was also eliminated, he said.

As a result of the cuts, Schmaltz said, his organization has seen more of its clients wind up in jail, homeless or having a relapse of their worst symptoms.

“I’ve got a wife and children who will remind me if I forget my medicine and say call the doctor,” Schmaltz said. “But if you’re a person with serious mental illness who may be socially isolated, you’re kind of abandoned now.”