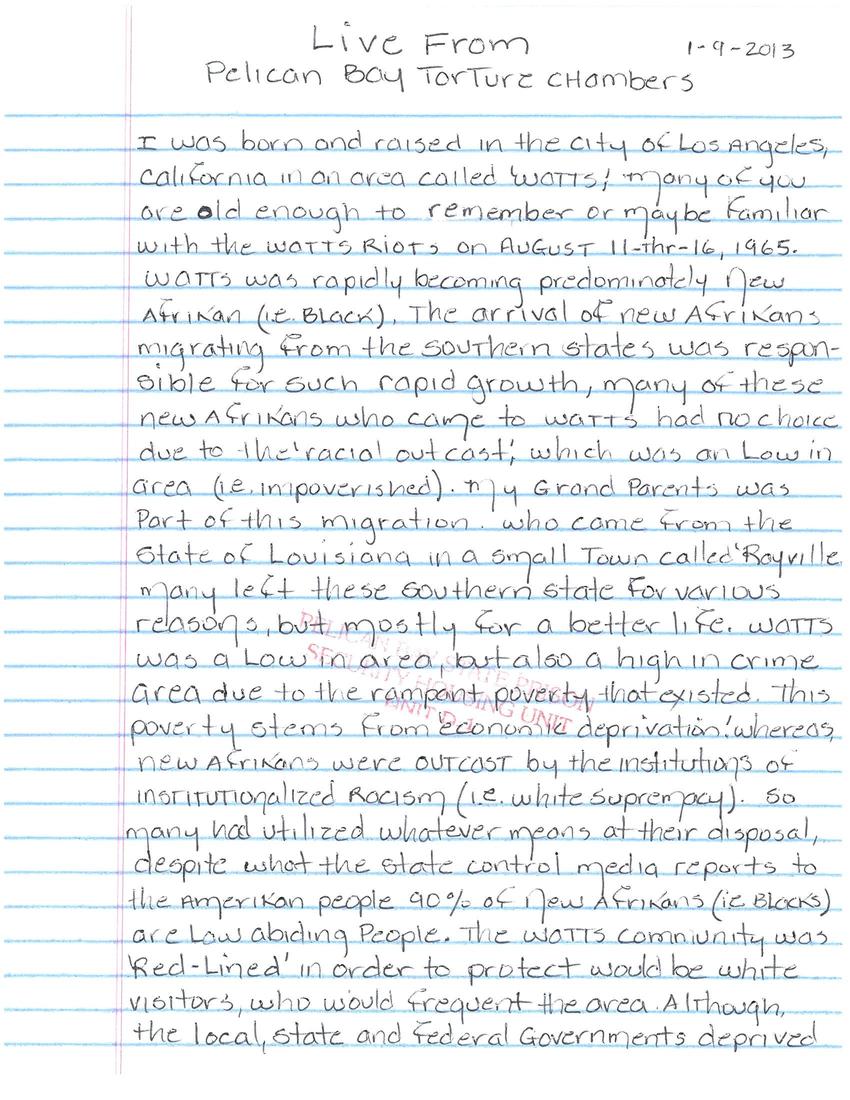 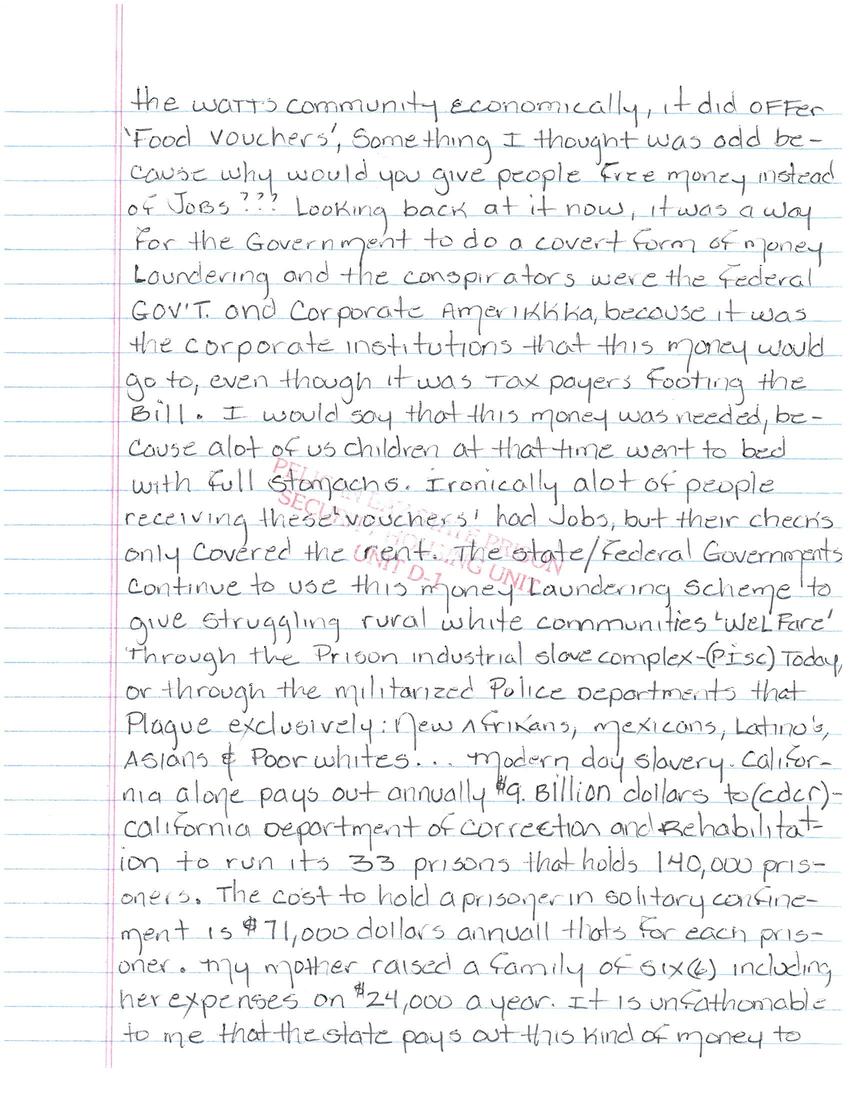 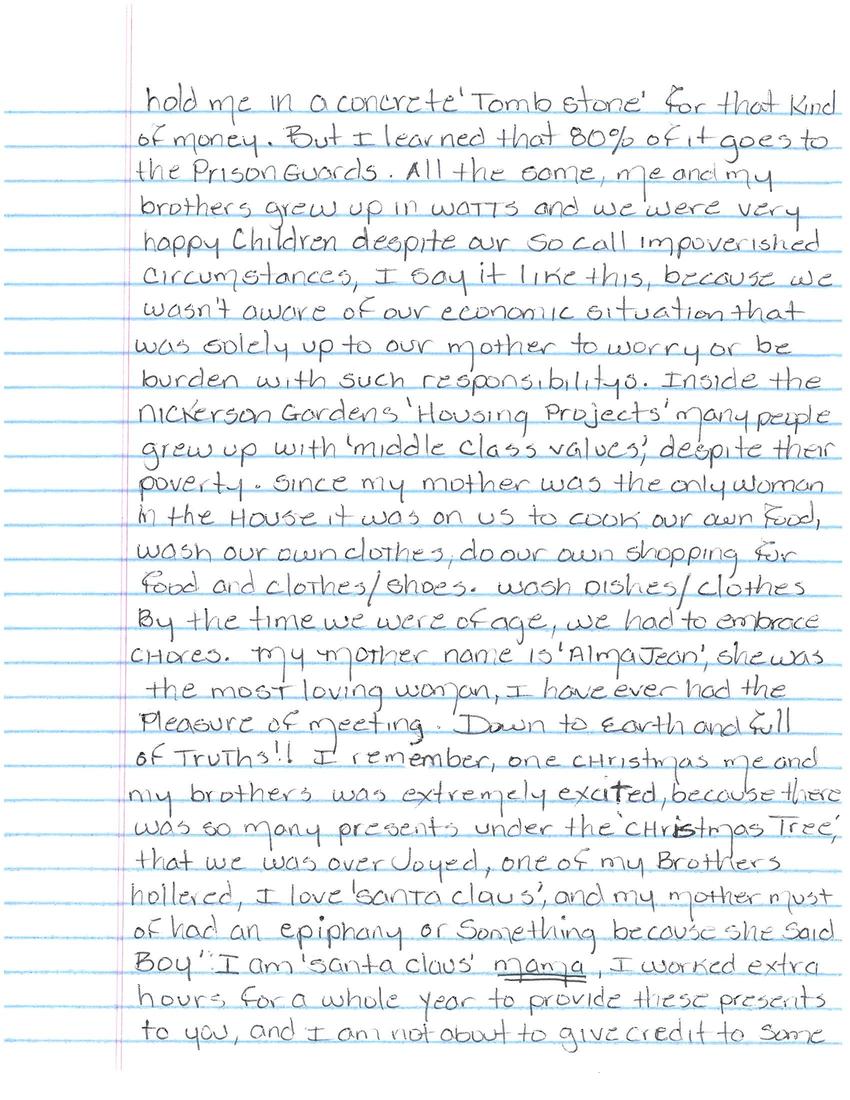 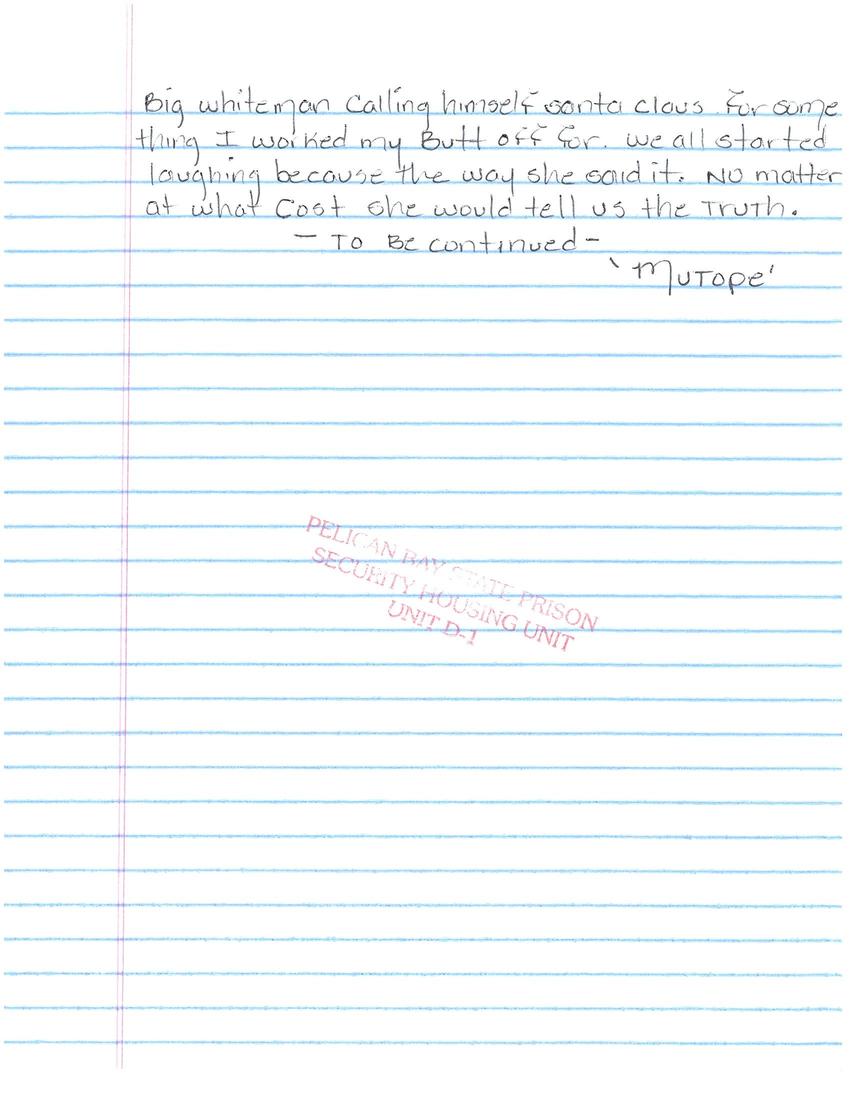 I was born and raised in the city of Los Angeles, California in an area called "Watts". Many of you are old enough to remember or may be familiar with the Watts Riots on August 11-thru-16, 1965. Watts was rapidly becoming predominantly New Afrikan (i.e. black). The arrival of New Afrikans migrating from the southern states was responsible for such rapid growth, many of these New Afrikans who came to Watts had no choice due to the 'racial outcast', which was an low in area (i.e. impoverished). My grandparents was part of this migration, who came from the state of Louisiana in a small town called Royville. Many left these southern states for various reasons, but mostly for a better life. Watts was a low in area, but also a high in crime area due to the rampant poverty that existed. This poverty stems from "economic deprivation", whereas New Afrikans were outcast by the institutions of institutionalized racism (i.e. white supremacy). So many had utilized whatever means at their disposal, despite what the state controlled media reports to the American people 90% of New Afrikans (i.e. blacks) are law abiding people. The Watts community was "red-lined" in order to protect would be white visitors, who would frequent the area. Although the local, state and federal governments deprived the Watts community economically, it did offer "food vouchers", something I thought was odd because why would you give people free money instead of jobs??? Looking back at it now, it was a way for the government to do a covert form of money laundering and the conspirators were the federal gov't and corporate Amerikkka, because it was the corporate institutions that this money would go to, even though it was taxpayers footing the bill. I would say that this money was needed, because a lot of us children at that time went to bed with full stomachs. Ironically, a lot of people receiving these "vouchers" had jobs, but their checks only covered the rent. The state/federal governments continue to use this money laundering scheme to give struggling rural white communities "welfare" through the prison industrial slave complex (PISC) today, or through the militarized police departments that plague exclusively: New Afrikans, Mexicans, Latinos, Asians & poor whites... modern day slavery. California alone pays out annually $9 Billion dollars to (CDCR) California Department of Correction and Rehabilitation to run its 33 prisons that holds 140,000 prisoners. The cost to hold a prisoner in solitary confinement is $71,000 dollars annually, that's for each prisoner. My mother raised a family of six (6), including her expenses, on $24,000 a year. It is unfathomable to me that the state pays out this kind of money to hold me in a concrete "tombstone" for that kind of money. But I learned that 80% of it goes to the prison guards. All the same, me and my brothers grew up in Watts and we were very happy children despite our so-called impoverished circumstances. I say it like this, because we wasn't aware of our economic situation, that was solely up to our mother to worry or be burdened with such responsibilities. Inside the Nickerson Gardens "Housing Projects", many people grew up with "middle class values", despite their poverty. Since my mother was the only woman in the house, it was on us to cook our own food, wash our own clothes, do our own shopping for food and clothes/shoes, wash dishes/clothes. By the time we were of age, we had to embrace chores. My mother's name is "Alma Jean", she was the most loving woman I have ever had the pleasure of meeting. Down to earth and full of truths! I remember, one Christmas me and my brothers was extremely excited, because there was so many presents under the "Christmas tree" that we was overjoyed, one of my brothers hollered, I love "Santa Claus", and my mother must of had an epiphany or something because she said Boy, I am "Santa Claus"' MAMA, I worked extra hours for a whole year to provide these presents to you, and I am not about to give credit to some big white man calling himself Santa Claus for something I worked my butt off for. We all started laughing because the way she said it. No matter at what cost she would tell us the truth.

Hey Mutope! I found your story here in BtB and that made me smile and learn.
Love,
Your friend across the pond
(scanned reply – view as blog post)
uploaded March 27, 2014.  Original (PDF)