Chronicles Of An American Jackass 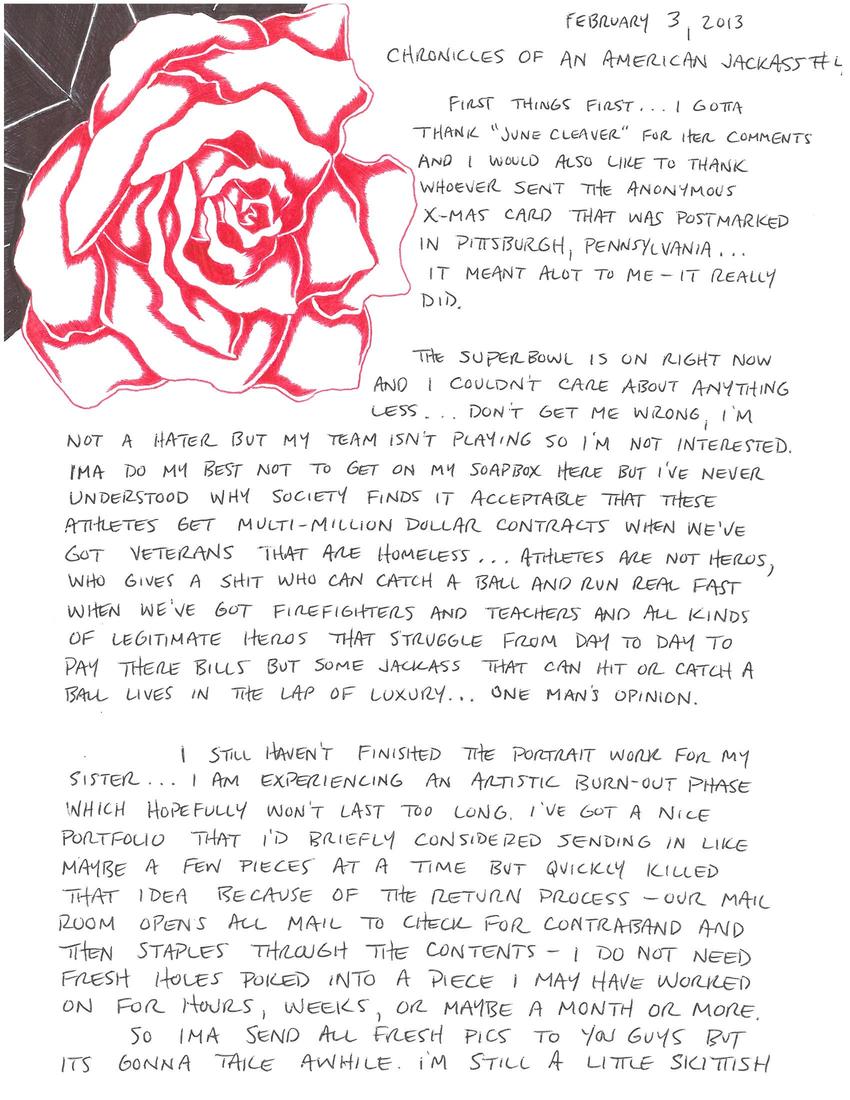 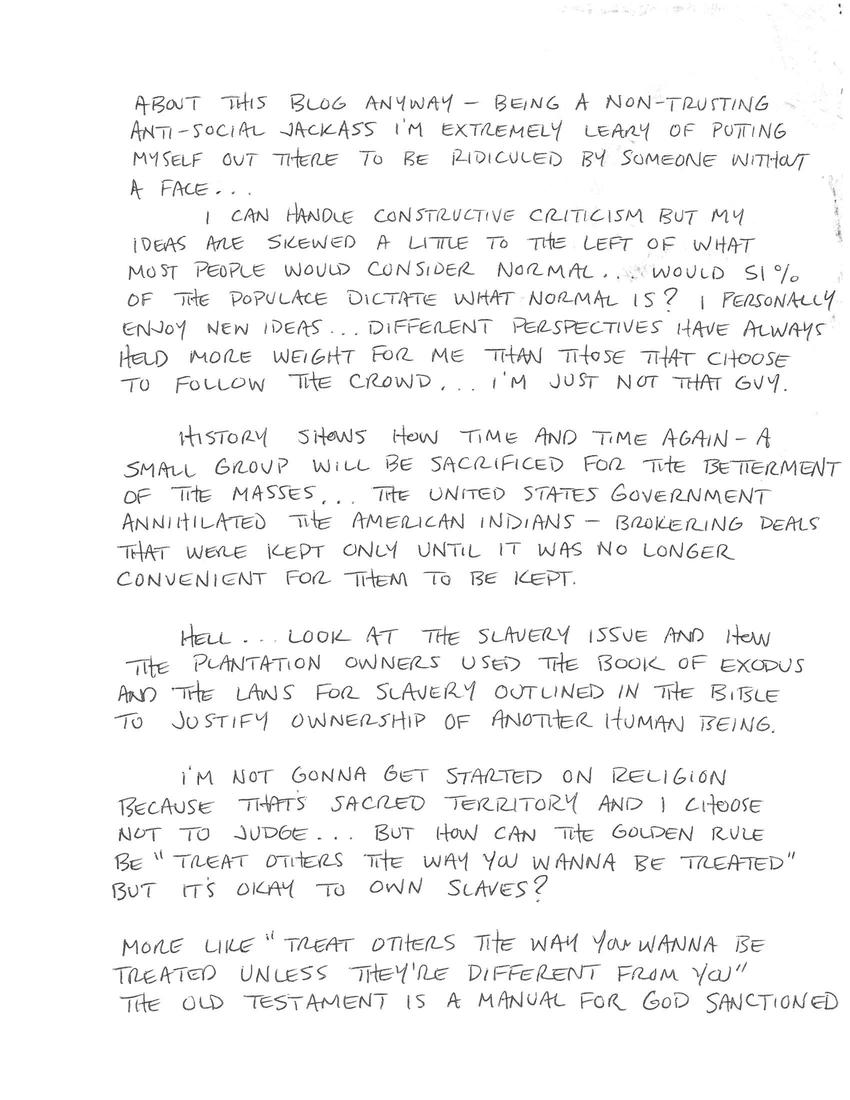 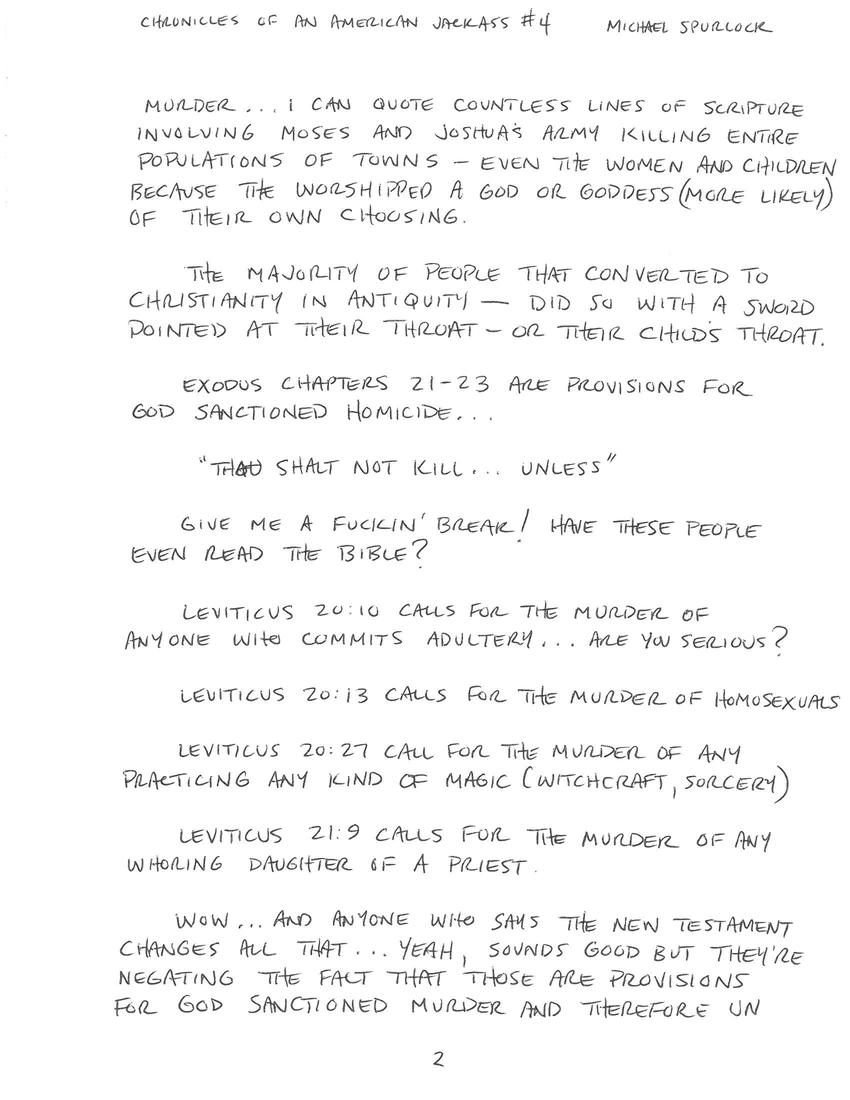 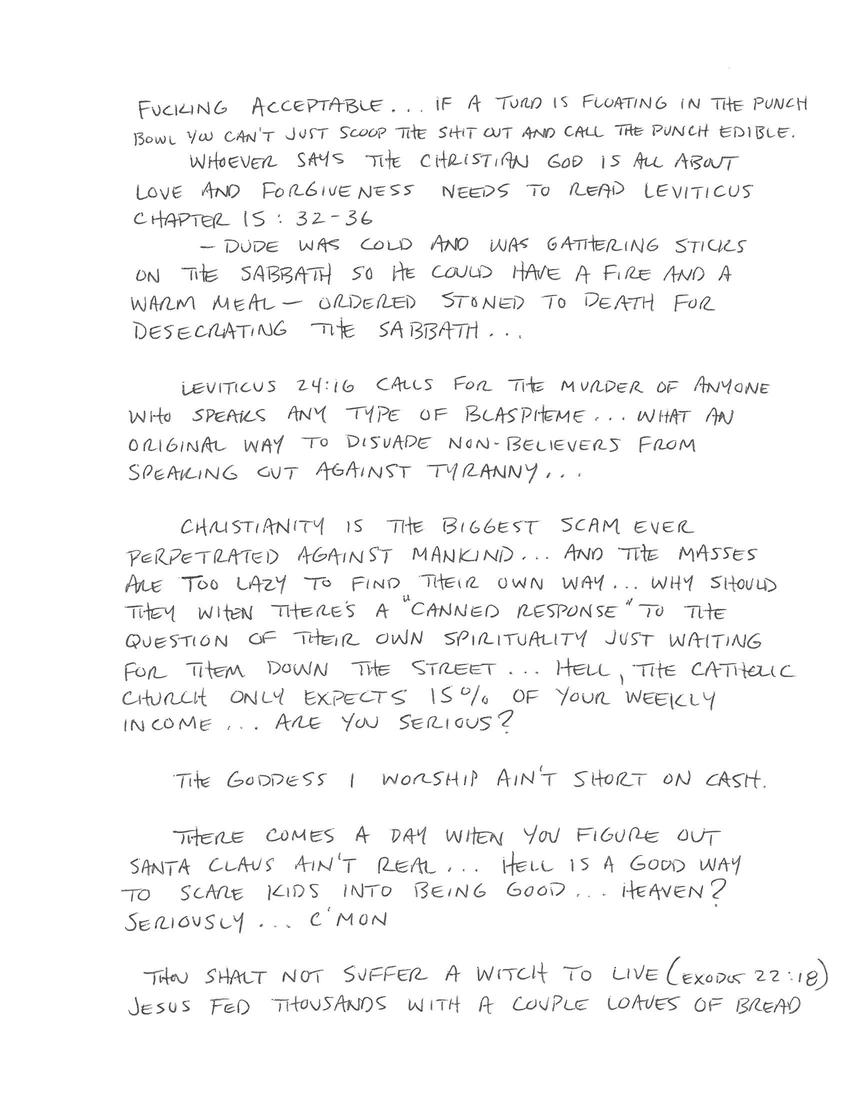 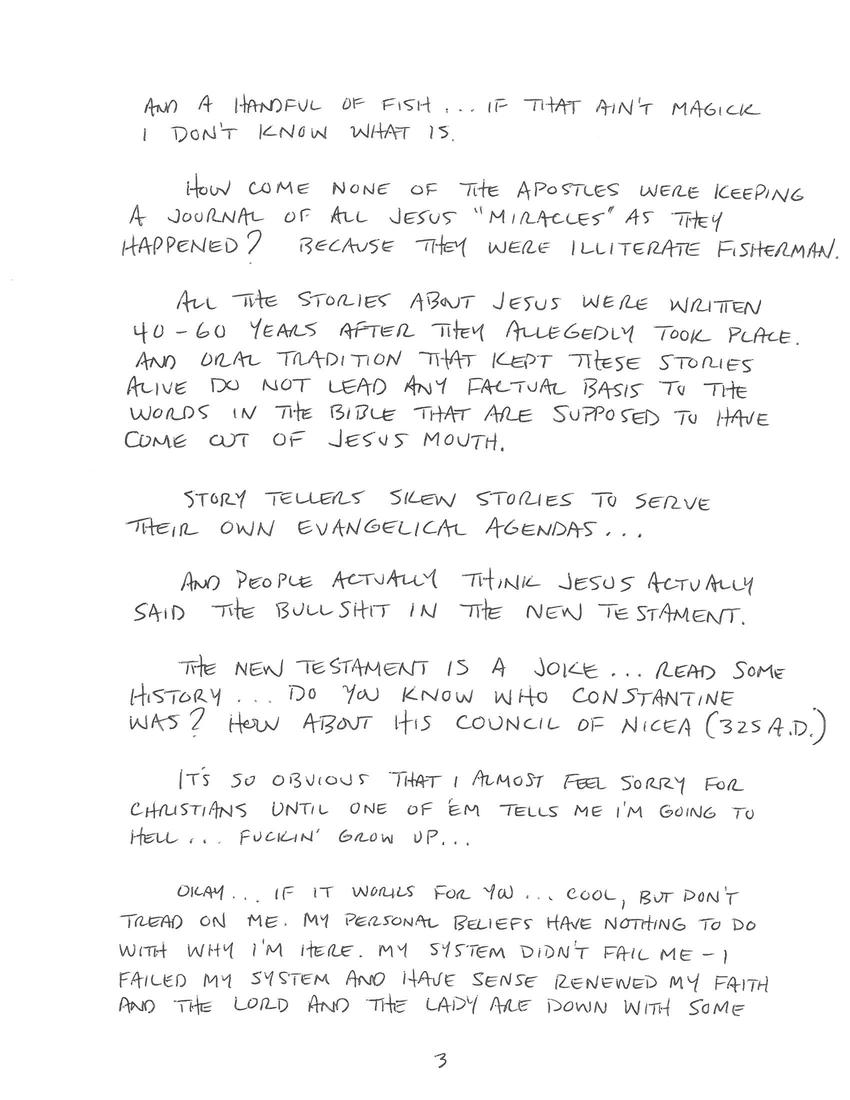 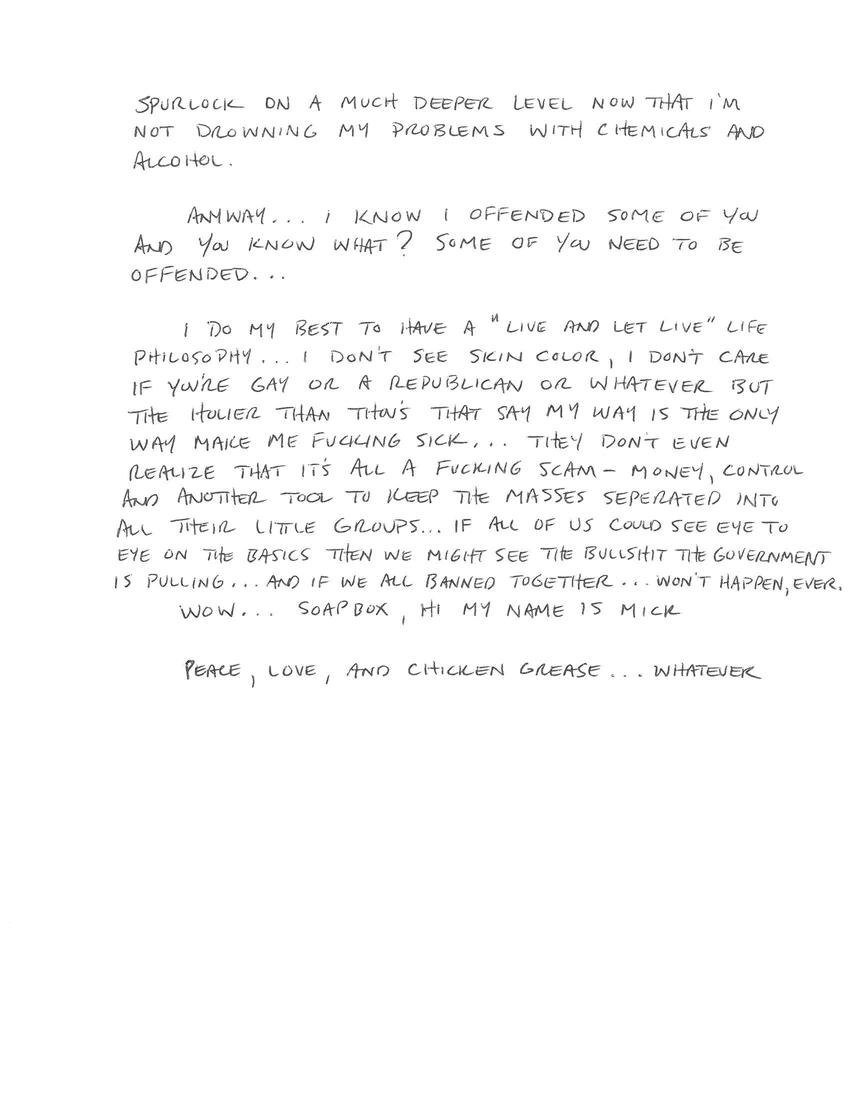 First things first... I gotta thank "June Cleaver" for her comments and I would also like to thank whoever sent the anonymous X-mas card that was postmarked in Pittsburgh, Pennsylvania... It meant a lot to me - it really did.

The Superbowl is on right now and I couldn't care about anything less... Don't get me wrong, I'm not a hater but my team isn't playing so I'm not interested. Ima do my best not to get on my soapbox here but I've never understood why society finds it acceptable that these athletes get multi-million dollar contracts when we've got veterans that are homeless... Athletes are not heroes, who gives a shit who can catch a ball and run real fast when we've got firefighters and teachers and all kinds of legitimate heroes that struggle from day to day to pay their bills but some jackass that can hit or catch a ball lives in the lap of luxury... One man's opinion.

I still haven't finished the portrait work for my sister... I am experiencing an artistic burn-out phase which hopefully won't last too long. I've got a nice portfolio that I'd briefly considered sending in like maybe a few pieces at a time but quickly killed that idea because of the return process - our mail room opens all mail to check for contraband and then staples through the contents - I do not need fresh holes poked into a piece I may have worked on for hours, weeks, or maybe a month or more.

So Ima send all fresh pics to you guys but it's gonna take awhile. I'm still a little skittish about this blog anyway - being a non-trusting anti-social jackass I'm extremely leery of putting myself out there to be ridiculed by someone without a face...

I can handle constructive criticism but my ideas are skewed a little to the left of what most people would consider normal... would 51% of the populace dictate what normal is? I personally enjoy new ideas... Different perspectives have always held more weight for me than those that choose to follow the crowd... I'm just not that guy.

History shows how time and time again - a small group will be sacrificed for the betterment of the masses... The United States government annihilated the American Indians - brokering deals that were kept only until it was no longer convenient for them to be kept.

Hell... look at the slavery issue and how the plantation owners used the Book of Exodus and the laws for slavery outlined in the Bible to justify ownership of another human being.

I'm not gonna get started on religion because that's sacred territory and I choose not to judge... But how can the golden rule be "treat others the way you wanna be treated" but it's okay to own slaves?

More like "treat others the way you wanna be treated unless they're different from you". The Old Testament is a manual for God sanctioned murder... I can quote countless lines of scripture involving Moses and Joshua's army killing entire populations of towns - even the women and children because they worshipped a god or goddess (more likely) of their own choosing.

The majority of people that converted to Christianity in antiquity - did so with a sword pointed at their throat - or their child's throat.

"Thou shalt not kill... unless"

Give me a fuckin' break! Have these people even read the Bible?

Leviticus 20:10 calls for the murder of anyone who commits adultery... are you serious?

Leviticus 20:13 calls for the murder of homosexuals.

Leviticus 20:27 calls for the murder of any practicing any kind of magic (witchcraft, sorcery).

Leviticus 21:9 calls for the murder of any whoring daughter of a priest.

Wow... And anyone who says the New Testament changes all that... Yeah, sounds good but they're negating the fact that those are provisions for God sanctioned murder and therefore un fucking acceptable... If a turd is floating in the punch bowl you can't just scoop the shit out and call the punch edible.

Whoever says the Christian God is about love and forgiveness needs to read Leviticus Chapter 15:32-36.

- Dude was cold and was gathering sticks on the Sabbath so he could have a fire and a warm meal - ordered stoned to death for desecrating the Sabbath.

Leviticus 24:16 calls for the murder of anyone who speaks any type of blasphemy... What an original way to dissuade non-believers from speaking out against tyranny...

Christianity is the biggest scam ever perpetrated against mankind... and the masses are too lazy to find their own way... Why should they when there's a "canned response" to the question of their own spirituality just waiting for them down the street... Hell, the Catholic Church only expects 15% of your weekly income... Are you serious?

The goddess I worship ain't short on cash.

There comes a day when you figure out Santa Claus ain't real... Hell is a good way to scare kids into being good... Heaven? Seriously... c'mon.

Thou shalt not suffer a witch to live (Exodus 22:18). Jesus fed thousands with a couple loaves of bread and a handful of fish... If that ain't magick I don't know what is.

How come none of the apostles were keeping a journal of all Jesus' "miracles" as they happened? Because they were illiterate fishermen.

All the stories about Jesus were written 40-60 years after they allegedly took place. And oral tradition that kept these stories alive do not lead any factual basis to the words in the Bible that are supposed to have come out of Jesus' mouth.

Storytellers skew stories to serve their own evangelical agendas...

And people actually think Jesus actually said the bullshit in the New Testament.

The New Testament is a joke... read some history... Do you know who Constantine was? How about the Council of Nicaea (325 AD)?

It's so obvious that I almost feel sorry for Christians until one of 'em tells me I'm going to hell... Fuckin' grow up...

Okay... if it works for you... cool, but don't tread on me. My personal beliefs have nothing to do with why I'm here. My system didn't fail me - I failed my system and have since renewed my faith and the Lord and the Lady are down with some Spurlock on a much deeper level now that I'm not drowning my problems with chemicals and alcohol.

Anyway... I know I offended some of you and you know what? Some of you need to be offended...

I do my best to have a "live and let live" life philosophy... I don't see skin color, I don't care if you're gay or a Republican or whatever but the holier than thou's that say my way is the only way make me fucking sick... They don't even realize that it's all a fucking scam - money, control and another tool to keep the masses separated into all their little groups... If all of us could see eye to eye on the basics then we might see the bullshit the government is pulling... and if we all banded together... Won't happen, ever.

Peace, love and chicken grease... whatever.