Prayer For Deliverance From Generational Curses 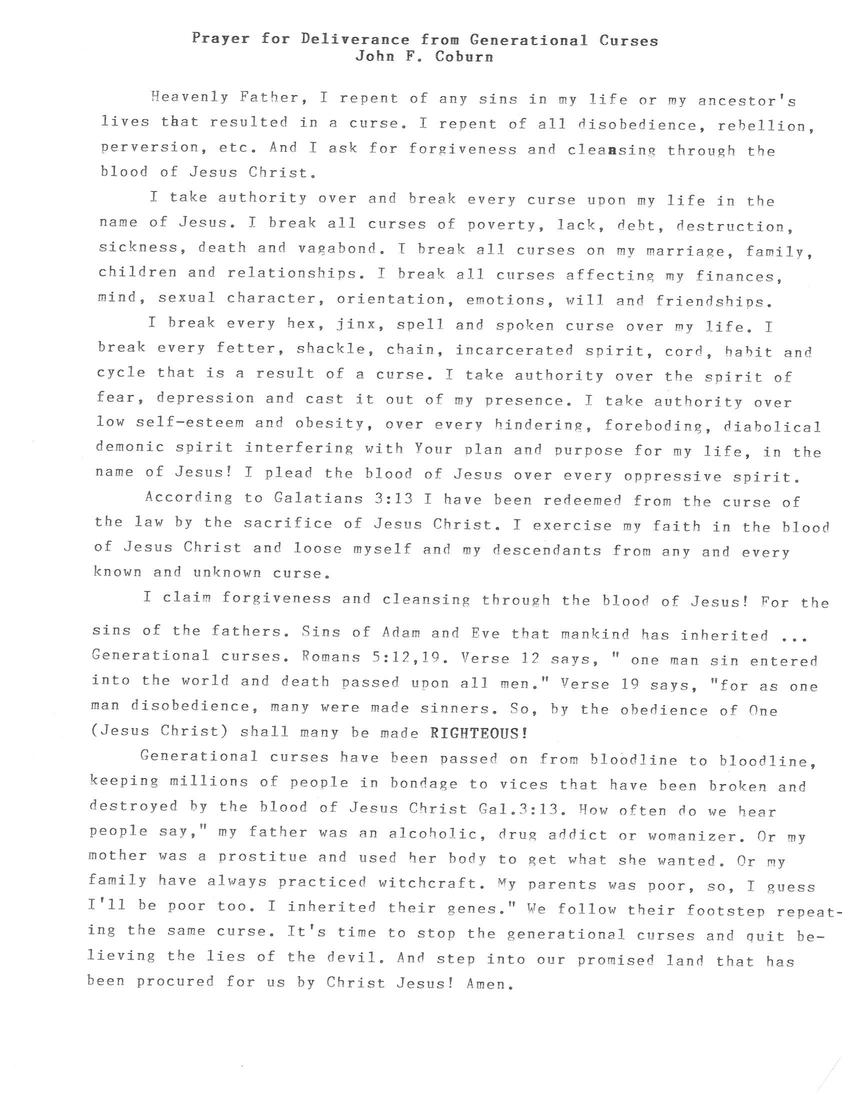 Heavenly Father, I repent of any sins in my life or my ancestor's lives that resulted in a curse. I repent of all disobedience, rebellion, perversion, etc. And I ask for forgiveness and cleansing through the blood of Jesus Christ.

I break every hex, jinx, spell and spoken curse over my life. I break every fetter, shackle, chain, incarcerated spirit, cord, habit and cycle that is a result of a curse. I take authority over low self-esteem and obesity, over every hindering, foreboding, diabolical demonic spirit interfering with Your plan and purpose for my life, in the name of Jesus! I plead the blood of Jesus over every oppressive spirit.

According to Galatians 3:13 I have been redeemed from the curse of the law by the sacrifice of Jesus Christ. I exercise my faith in the blood of Jesus Christ and lose myself and my descendants from any and every known and unknown curse.

I claim forgiveness and cleansing through the blood of Jesus! For the sins of the fathers. Sins of Adam and Eve that mankind has inherited... Generational curses. Romans 5:12,19. Verse 12 says "one man's sin entered into the world and death passed upon all men." Verse 19 says, "for as one man disobedience, may were made sinners. So, by the obedience of One (Jesus Christ) shall many be made RIGHTEOUS!"

Generational curses have been passed on from bloodline to bloodline, keeping millions of people in bondage to vices that have been broken and destroyed by the blood of Jesus Christ Gal.3:13. How often do we hear people say, "my father was an alcoholic, drug addict or womaniser. Or my mother was a prostitute and used her body to get what she wanted. Or my family have always practised witchcraft. My parents were poor, so, I guess I'll be poor too. I inherited their genes." We follow their footsteps repeating the same curse. It's time to stop the generational curses and quit believing the lies of the devil. And step into our promised land that has been procured for us by Christ Jesus! Amen.