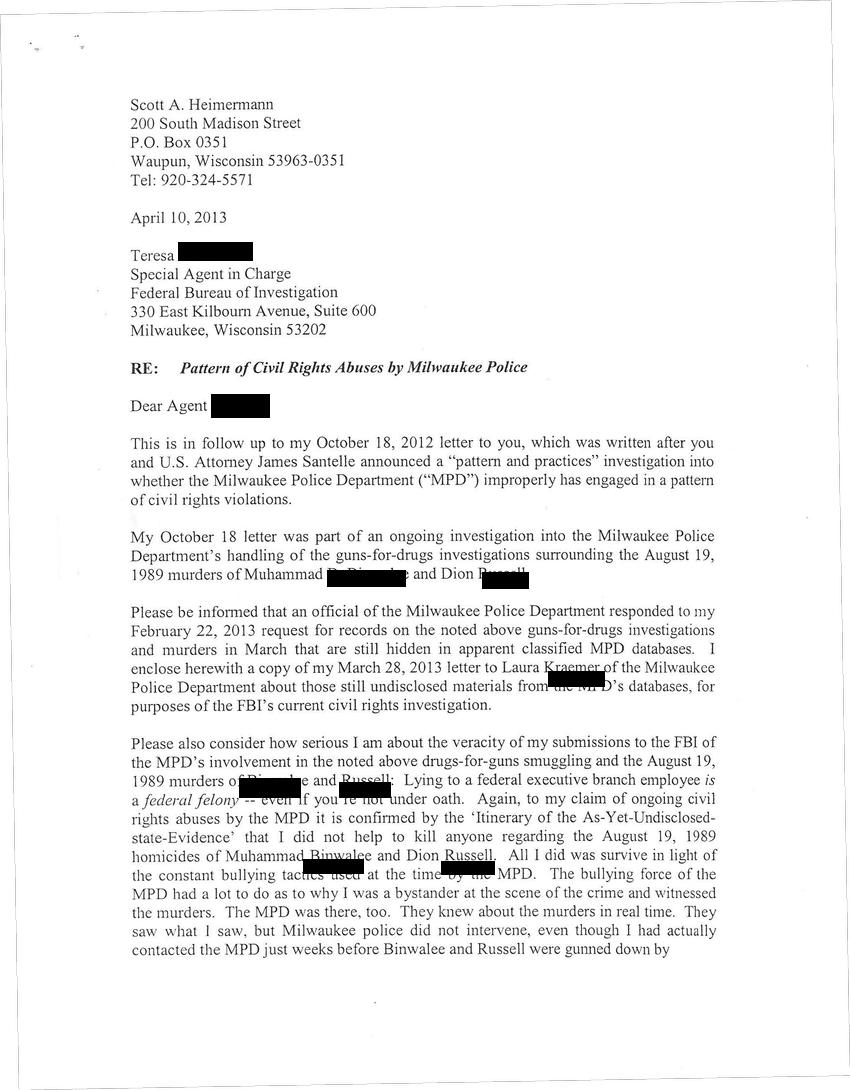 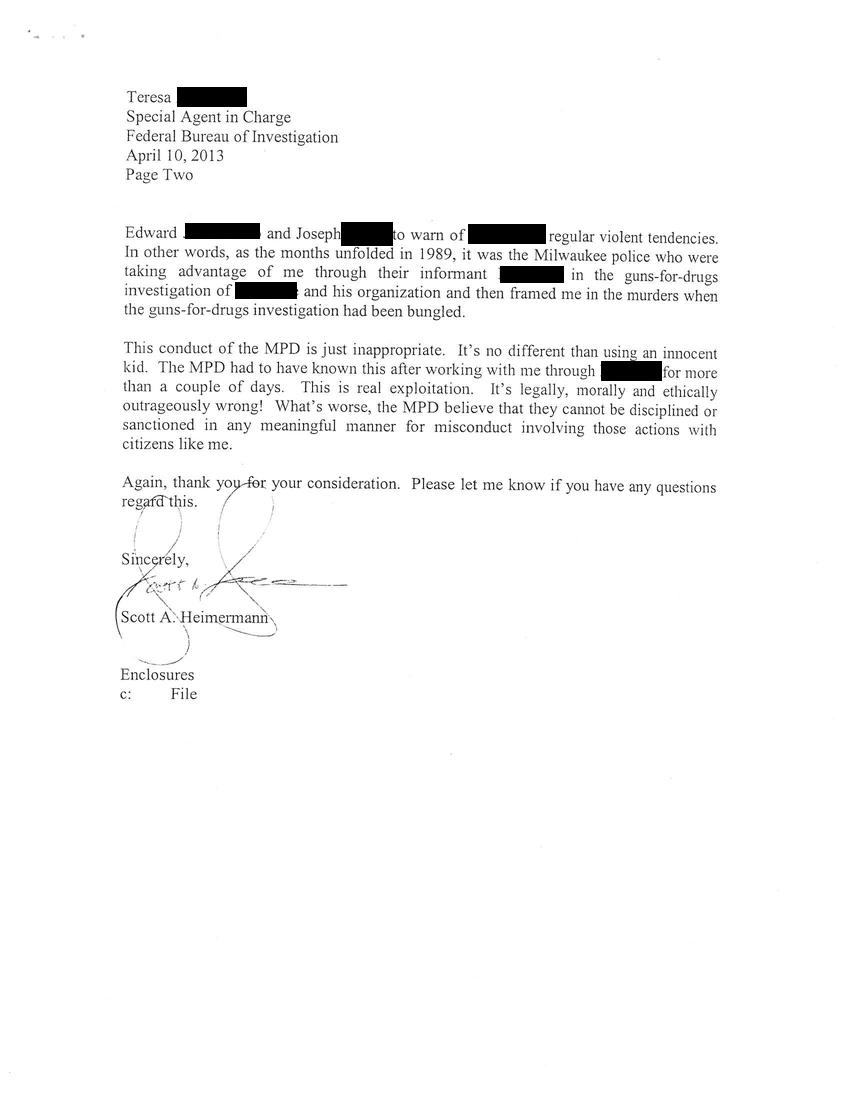 RE: Pattern of Civil Rights Abuses by Milwaukee Police

This is in follow up to my October 18, 2012 letter to you, which was written after you and U.S. Attorney James Santelle announced a "pattern and practices" investigation into whether the Milwaukee Police Department ("MPD") improperly has engaged in a pattern of civil rights violations.

My October 18 letter was part of an ongoing investigation into the Milwaukee Police Department's handling of the guns-for-drugs investigations surrounding the August 19, 1989 murders of Muhammad D. Binwalee and Dion Russell.

Please be informed that an official of the Milwaukee Police Department responded to my February 22, 2013 request for records on the noted above guns-for-drugs investigations and murders in March that are still hidden in apparent classified MPD databases. I enclose herewith a copy of my March 28, 2013 letter to Laura Kraemer of the Milwaukee Police Department about those still undisclosed materials from the MPD's databases, for purposes of the FBI's current civil rights investigation.

Please also consider how serious I am about the veracity of my submissions to the FBI of the MPD's involvement in the noted above drugs-for-guns smuggling and the August 19, 1989 murders of Binwalee and Russell: Lying to a federal executive branch employee IS A FEDERAL FELONY -- even if you're not under oath. Again, to my claim of ongoing civil rights abuses by the MPD it is confirmed by the 'Itinerary of the As-Yet-Undisclosed-state-Evidence' that I did not help to kill anyone regarding the August 19, 1989 homicides of Muhammad Binwalee and Dion Russell. All I did was survive in light of the constant bullying tactics used at the time by the MPD. The bullying force of the MPD had a lot to do as to why I was a bystander at the scene of the crime and witnessed the murders. The MPD was there, too. They knew about the murders in real time. They saw what I saw, but Milwaukee police did not intervene, even though I had actually contacted the MPD just weeks before Binwalee and Russell were gunned down by Edward J. Piscitello and Joseph Isajiw to warn of Piscitello's regular violent tendencies. In other words, as the months unfolded in 1989, it was the Milwaukee police who were taking advantage of me through their informant Piscitello in the guns-for-drugs investigation of Binwalee and his organization and then framed me in the murders when the guns-for-drugs investigation had been bungled.

This conduct of the MPD is just inappropriate. It's no different than using an innocent kid. The MPD had to have known this after working with me through Piscitello for more than a couple of days. This is real exploitation. It's legally, morally and ethically outrageously wrong! What's worse, the MPD believe that they cannot be disciplined or sanctioned in any meaningful manner for misconduct involving those actions with citizens like me.

Again, thank you for your consideration. Please let me know if you have any questions regard this.

Mr. Scott I wanted 2 inform you that the "body guard" u refer 2 was my family member who had just turned 15 years old in november 1988. Hope u can still sleep at night. 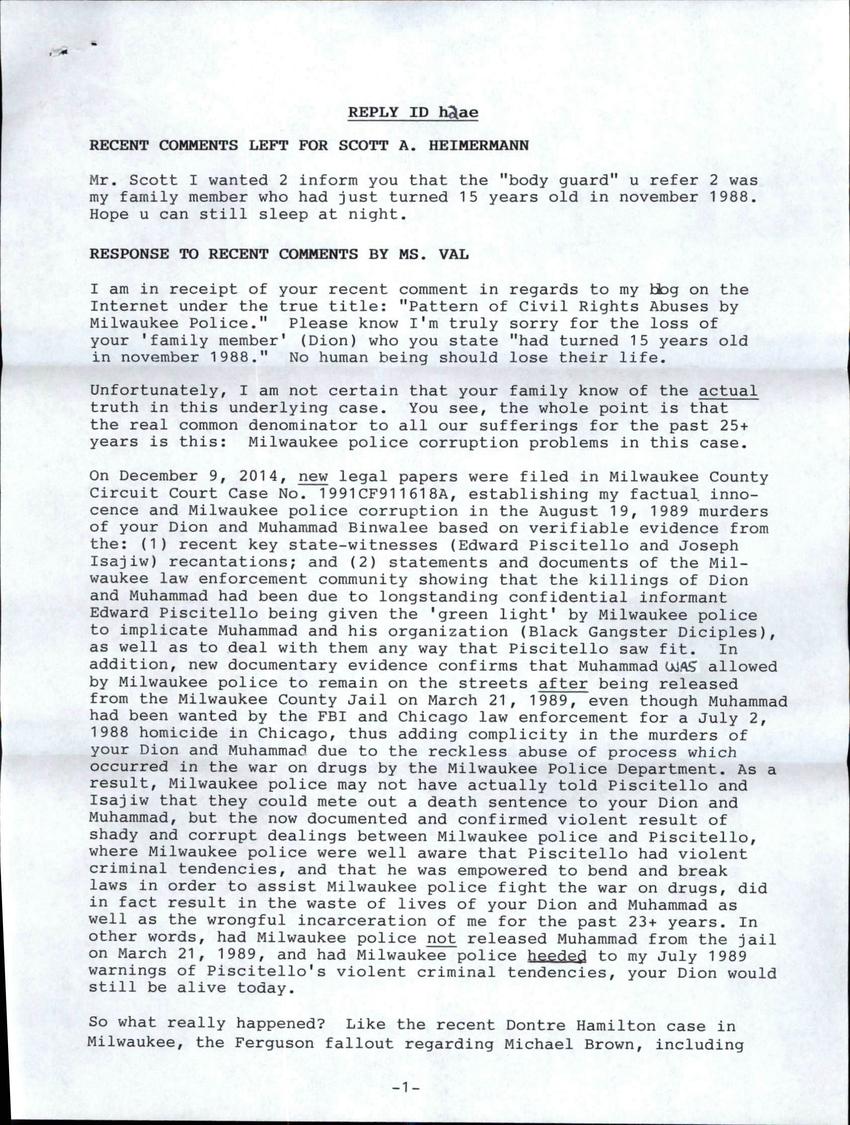 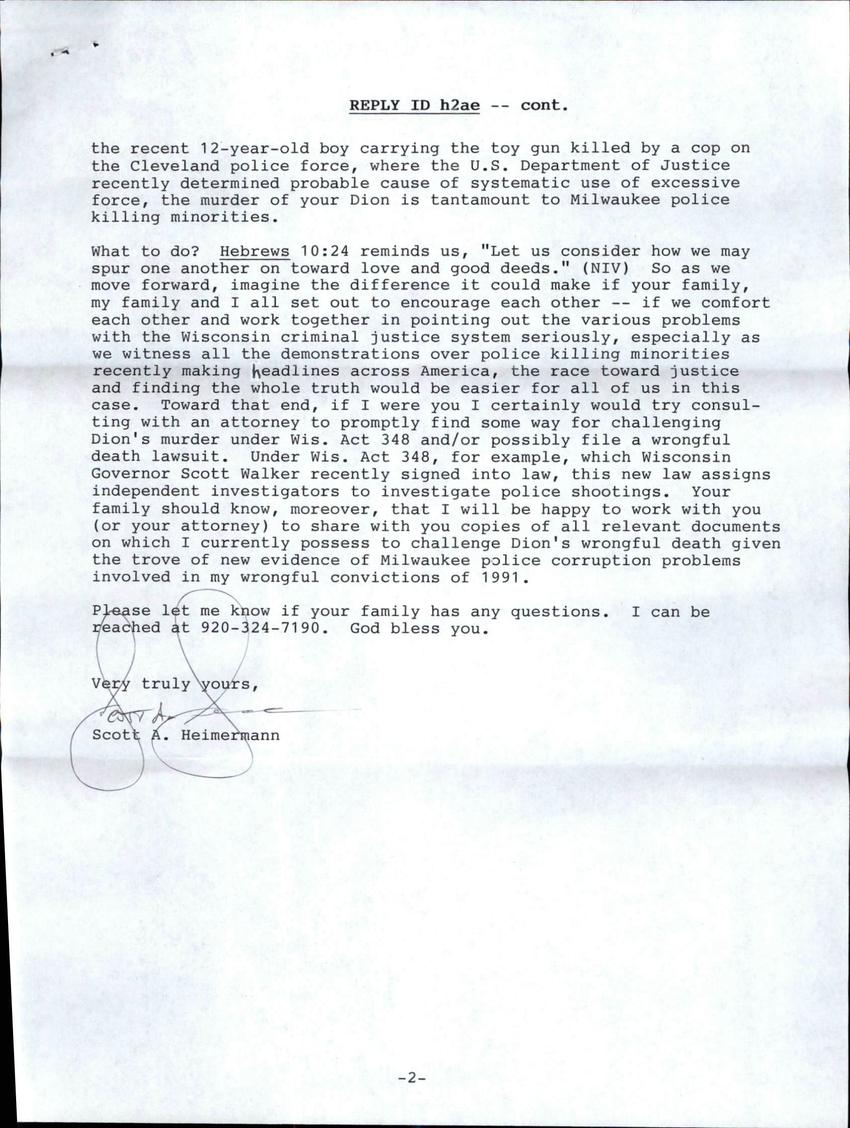 Are you aware of any connection Piscitello or the victims had to Max Adonnis? As you surely know, there is a long-standing rumor connecting these men (boys?) to Adonnis and his death. Any insight you had would be greatly appreciated.
Mr heimerman,
I've wanted to speak to you my whole life. Muhammad was my eldest brother and by the way I heard Dion was only 13 or 14.. anyway for now I have 2 questions 1. Can u get into more detail about mpd corruption and abuse (which we've always suspected) and if they were in fact "mob police" and 2. Do you feel murders of muhammad and Dion went further up the chain than just isakiw and piscitello. Thanks talk to you soon
J
(scanned reply – view as blog post)
uploaded Feb. 5, 2016.  Original (PDF) 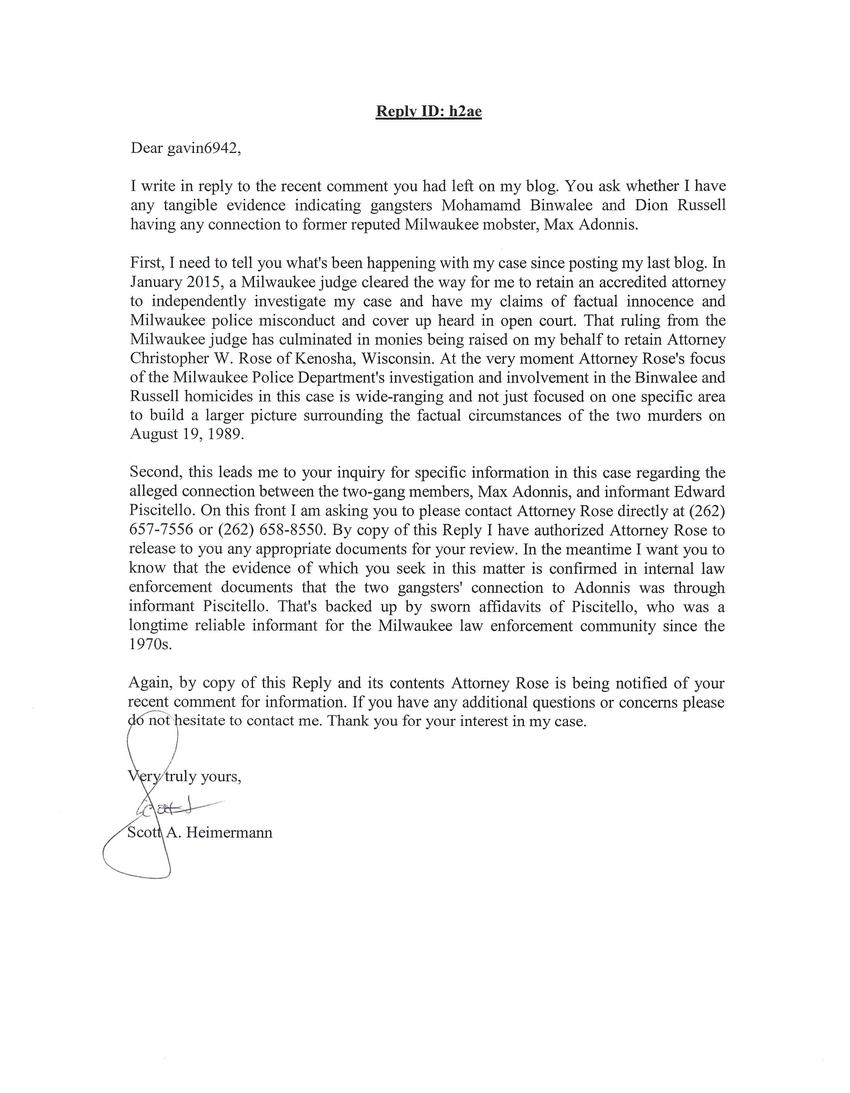 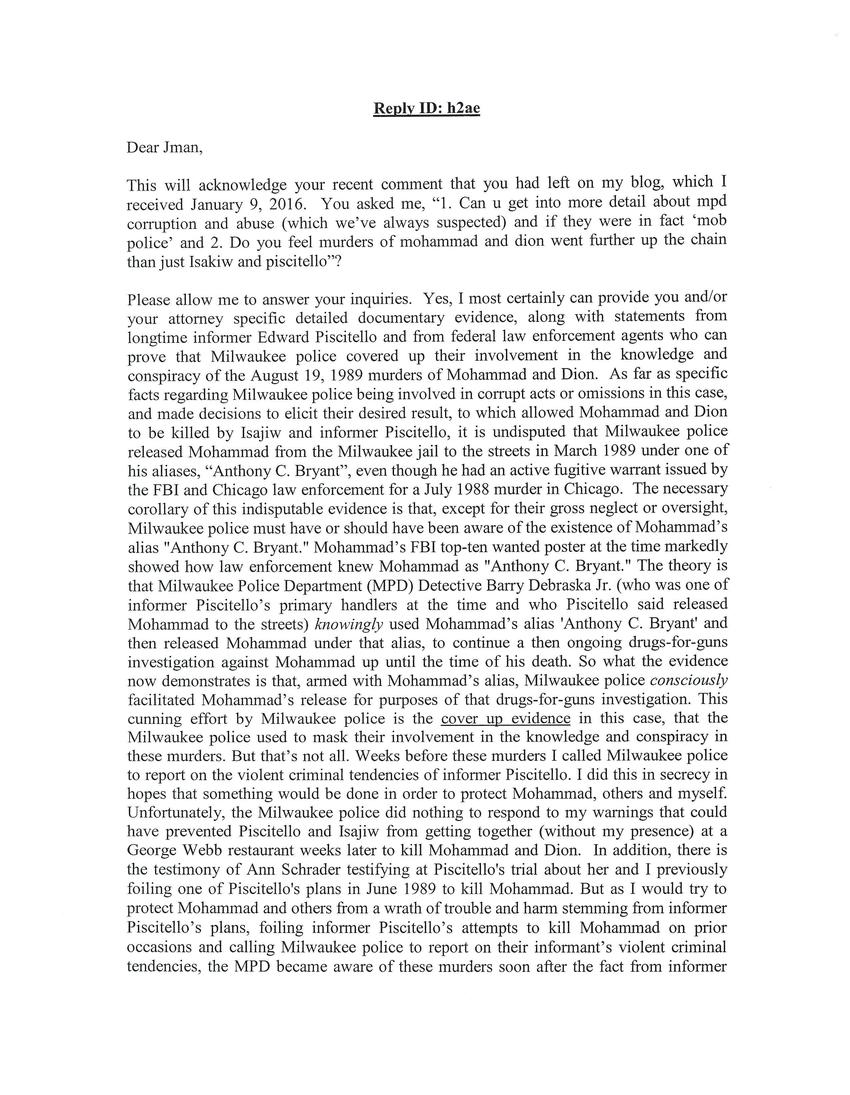 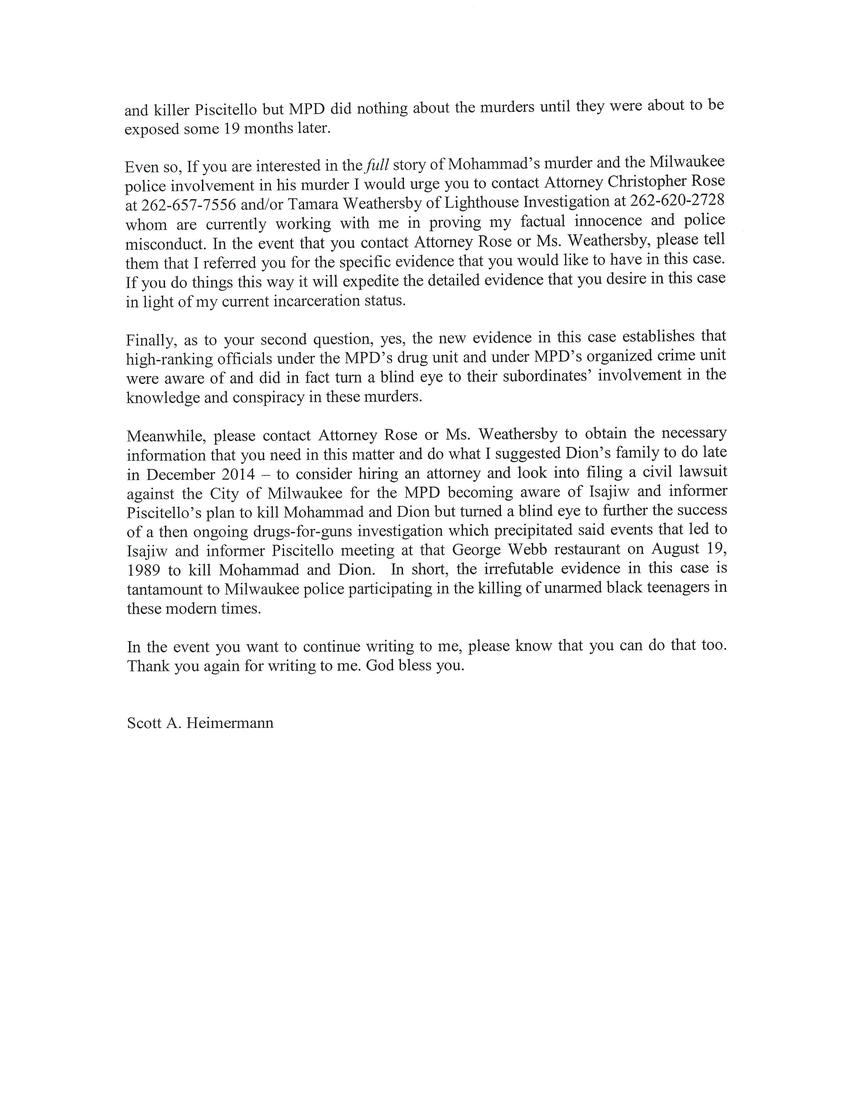 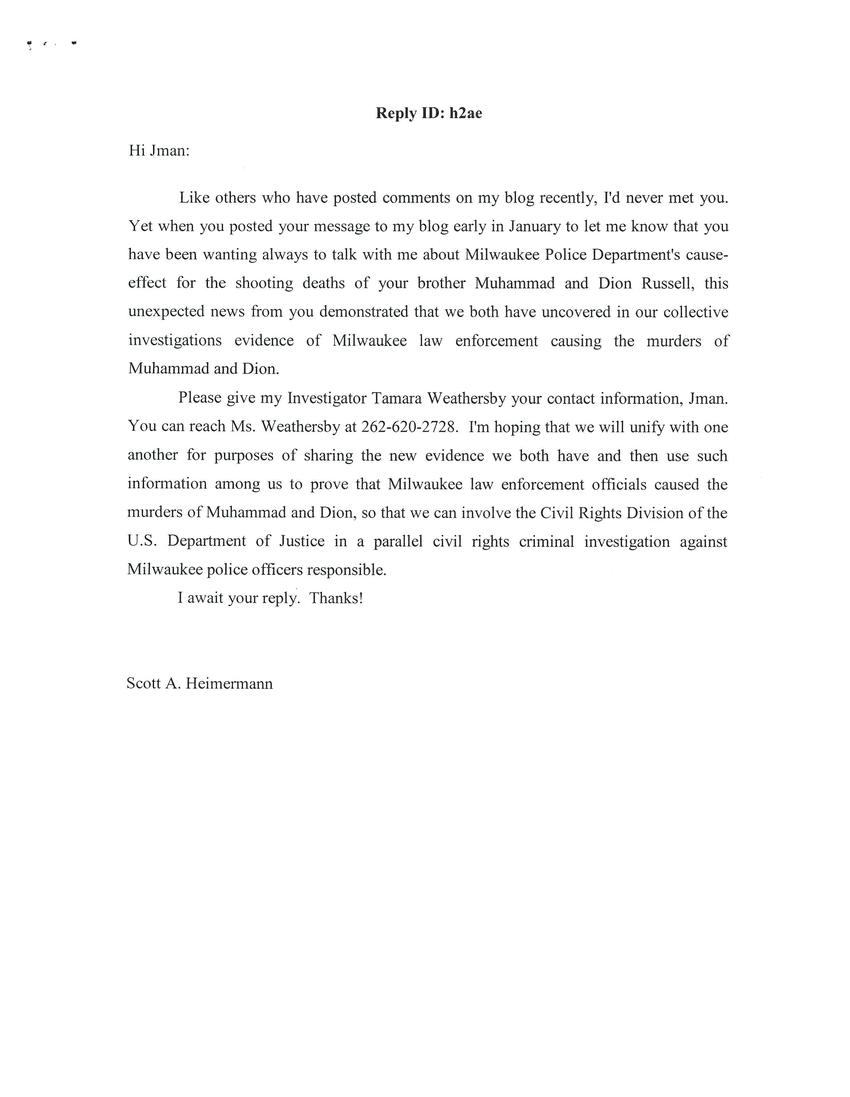