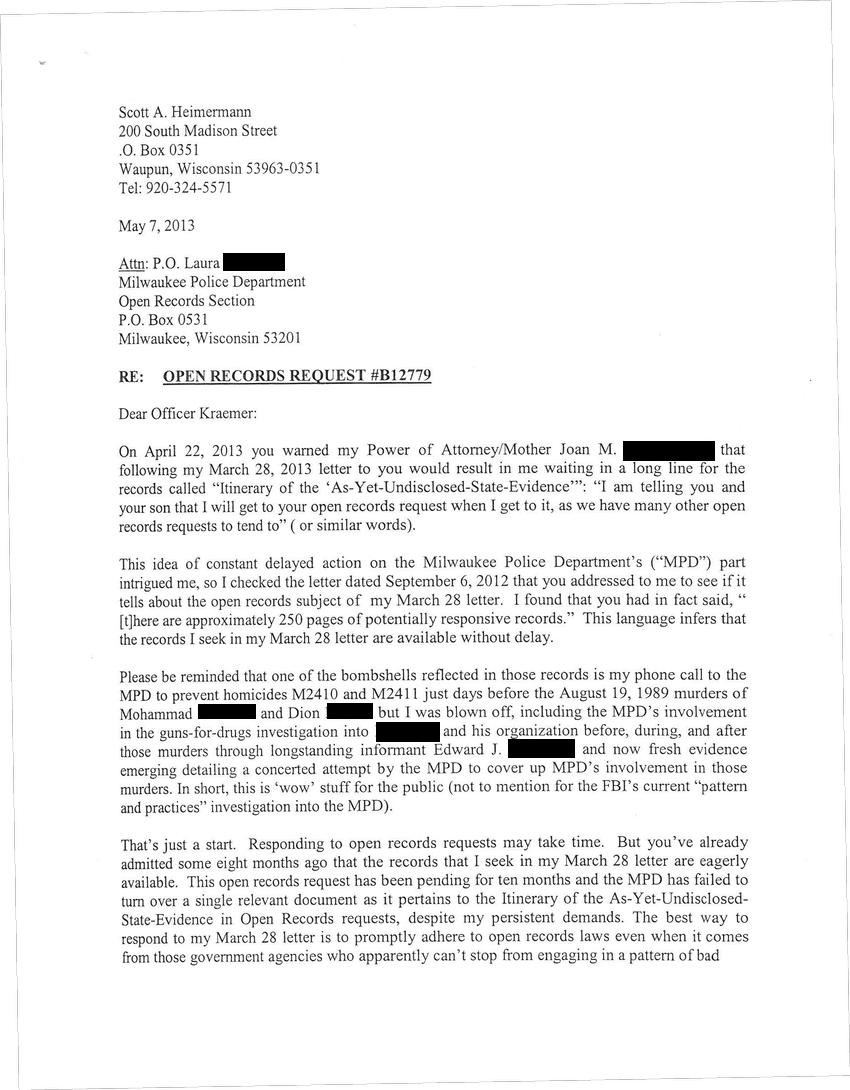 On April 22, 2013 you warned my Power of Attorney/Mother Joan M. [blacked out] that following my March 28, 2013 letter to you would result in me waiting in a long line for the records called "Itinerary of the 'As-Yet-Undisclosed-State-Evidence'": "I am telling you and your son that I will get to your open records request when I get to it, as we have many other open records requests to tend to" (or similar words).

This idea of constant delayed action on the Milwaukee Police Department's ("MPD") part intigued me, so I checked the letter dated September 6, 2012 that you addressed to me to see if it tells about the open records subject of my March 28 letter. I found that you had in fact said, "[t]here are approximately 250 pages of potentially responsive records." This language infers that the records I seek in my March 28 letter are available without delay.

Please be reminded that one of the bombshells reflected in those records is my phone call to the MPD to prevent homicides M2410 and M2411 just days before the August 19, 1989 murders of Mohammad [blacked out] and Dion [blacked out] but I was blown off, including the MPD's involvement in the guns-for-drugs investigation into [blacked out] and his organization before, during, and after those murders through longstanding informant Edward J. [blacked out] and now fresh evidence emerging detailing a concerted attempt by the MPD to cover up MPD's involvement in those murders. In short, this is 'wow' stuff for the public (not to mention for the FBI's current "pattern and practices" investigation into the MPD).

That's just a start. Responding to open records requests may take time. But you've already admitted some eight months ago that the records that I seek in my March 28 letter are eagerly available. This open records request has been pending for ten months and the MPD has failed to turn over a single relevant document as it pertains to the Itinerary of the As-Yet-Undisclosed-State-Evidence in Open Records requests, despite my persistent demands. The best way to respond to my March 28 letter is to promptly adhere to open records laws even when it comes from those government agencies who apparently can't stop from engaging in a pattern of bad faith stonewalling or fictionalizing on my demands for the Itinerary of the As-Yet-Undisclosed-State-Evidence, constantly giving me the runaround, and that this has made it less possible to pursue justice in my 1991 Milwaukee County criminal case.

Meantime, I am again asking you to please send me the records that I am entitled to under state and federal law so that I can immediately clear my name in the August 19, 1989 homicides. I look forward to your prompt response.