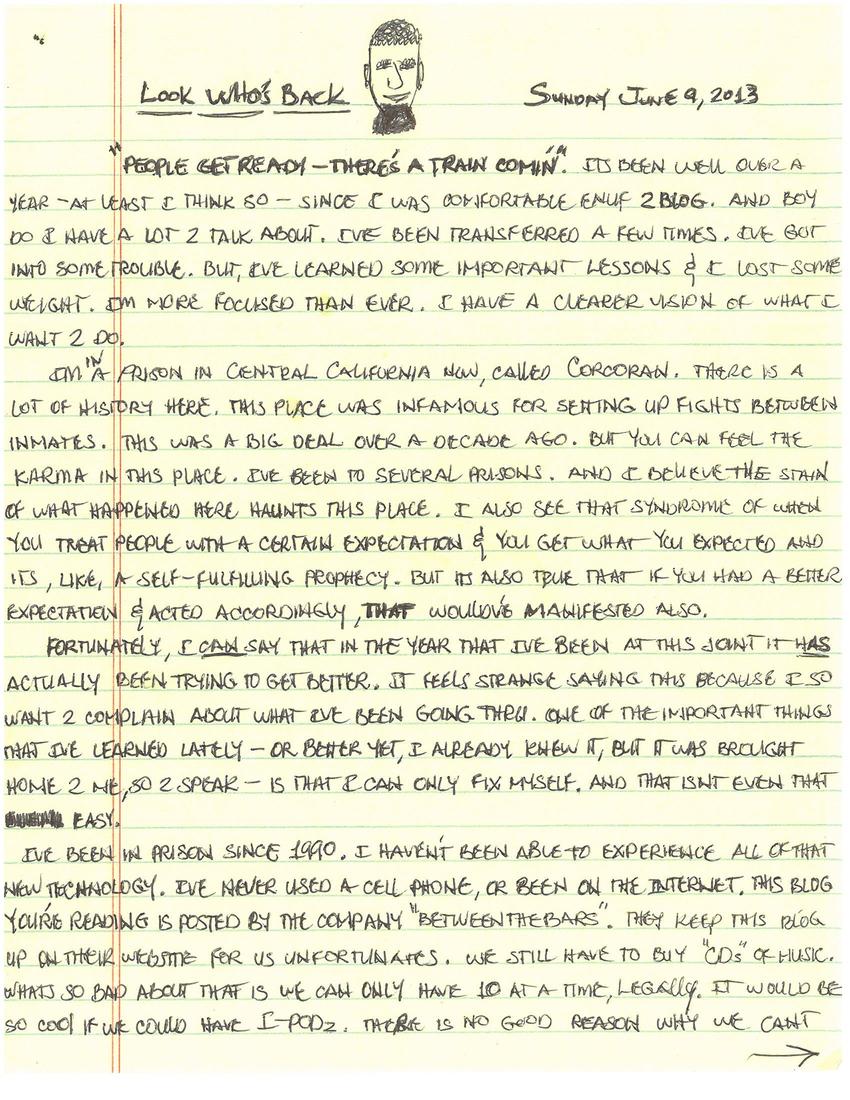 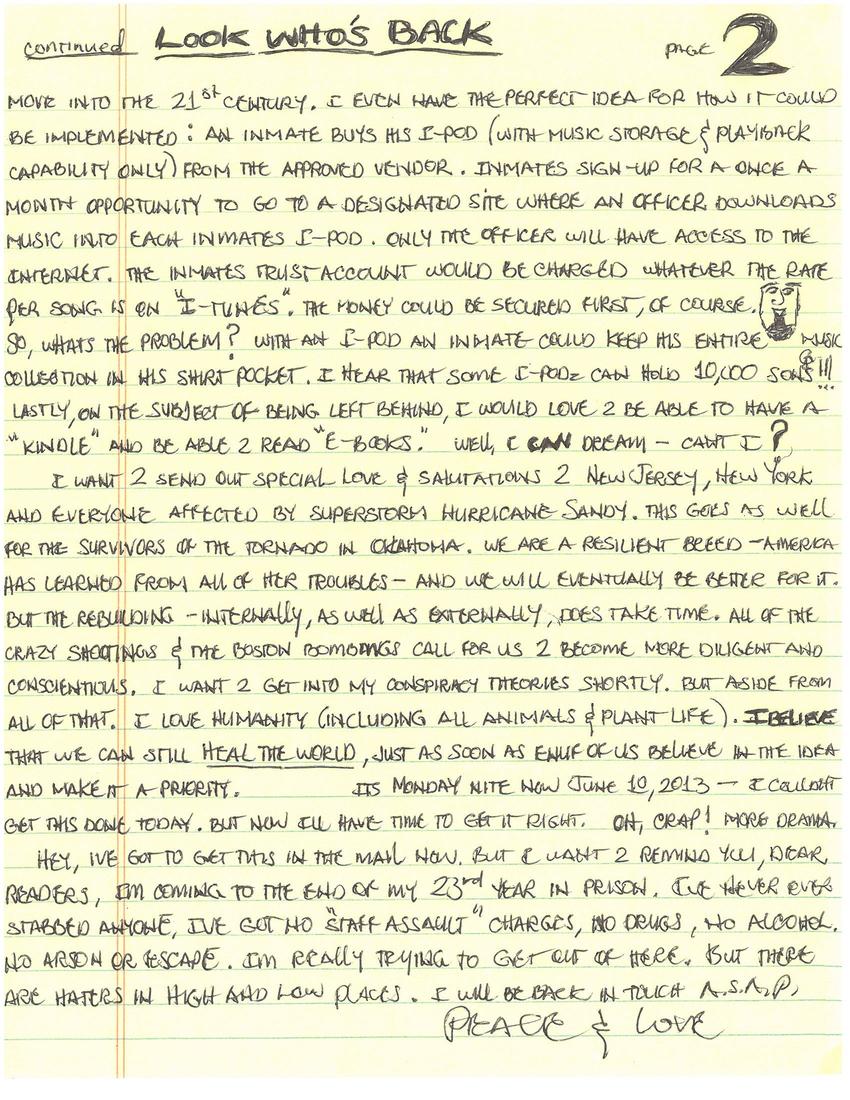 It's been well over a year - at least I think so - since I was comfortable enough to blog. And boy do I have a lot to talk about. I've been transferred a few times. I've got into some trouble. But, I've learned some important lessons and I lost some weight. I'm more focused than ever. I have a clearer vision of what I want to do.

I'm in a prison in central California now, called Corcoran. There is a lot of history here. This place was infamous for setting up fights between inmates. This was a big deal over a decade ago. But you can feel the karma in this place. I've been to several prisons. And I believe the stain of what happened here haunts this place. I also see that syndrome when you treat people with a certain expectation and you get what you expected and it's, like, a self-fulfilling prophecy. But it's also true that if you had a better expectation and acted accordingly, that wouldn't manifested also.

Fortunately, I can say that in the year that I've been at this joint it has actually been trying to get better. It feels strange saying this because I so want to complain about what I've been going through. One of the important things that I've learned lately - or better yet, I already knew it, but it was brought home to me, so to speak - is that I can only fix myself. And that isn't even that easy.

I've been in prison since 1990. I haven't been able to experience all of that new technology. I've never used a cell phone, or been on the internet. This blog you're reading is posted by the company "Between the Bars". They keep this blog up on their website for us unfortunates. We still have to buy "CDs" of music. What's so bad about that is we can only have 10 at a time, legally. It would be so cool if we could have iPods. There is no good reasons why we can't move into the 21st century. I even have the perfect idea for how it could be implemented: an inmate buys his iPod (with music storage and playback capability only) from the approved vendor. Inmates sign-up for a one a month opportunity to go to a designated site where an officer downloads music into each inmates iPod. Only the officer will have access to the internet. The inmates trust account would be charged whatever rate per song is on "itunes". The money could be secured first, of course. So, what's the problem? With an iPod an inmate could keep his entire music collection in his shirt pocket. I hear that some iPods can hold 10,000 songs! Lastly on the subject of being left behind, I would love to be able to have a "Kindle" and be able to read "e-books". Well, I can dream - can't I?

I want to send out special love and salutations to New Jersey, New York and everyone affected by superstorm hurricane Sandy. This goes as well for the survivors of the tornado in Oklahoma. We are a resilient breed - America has learned from all of her troubles - and we will eventually be better for it. But the rebuilding - internally, as well, as externally, does take time. All of the crazy shootings and the Boston bombings call for us to become more diligent and conscientious. I want to get into my conspiracy theories shortly. But aside from all of that, I love humanity (including all animals and plant life). I believe that we can still heal the world, just as soon as enough of us believe in the idea and make it a priority.

Hey, I've got to get this in the mail now. But I want to remind you, dear readers, I'm coming to the end of my 23rd year in prison. I've never ever stabbed anyone, I've got no "staff assault" charges, no drugs, no alcohol. No arson or escape. I'm really trying to get out of here. But there are haters in high and low places. I will be back in touch A.S.A.P.

Thanks for writing! I finished the transcription for your post. It's a nice idea, but I don't think it is realistic to have iPods in prison, it would be quite expensive and people still think that prison should be punishment rather rehabilitation. All the best.
Some prisons let the inmates have ipods (they purchase them off of the canteen). I know that the prison here in Florida let the women borrow small radios (only, they said, so they could listen to a local religious program -- the reception was so bad that was *almost* all they could get -- but, being in prison, and inventive, they found ways to boost the signal!).

Anything that keeps folks involved in a productive activity is a good thing.

But that's not the kind of forward thinking that usually goes into the decision making.

At the male prison I worked at, the inmates couldn't even get to the library on any kind of regular (and I mean monthly) basis. 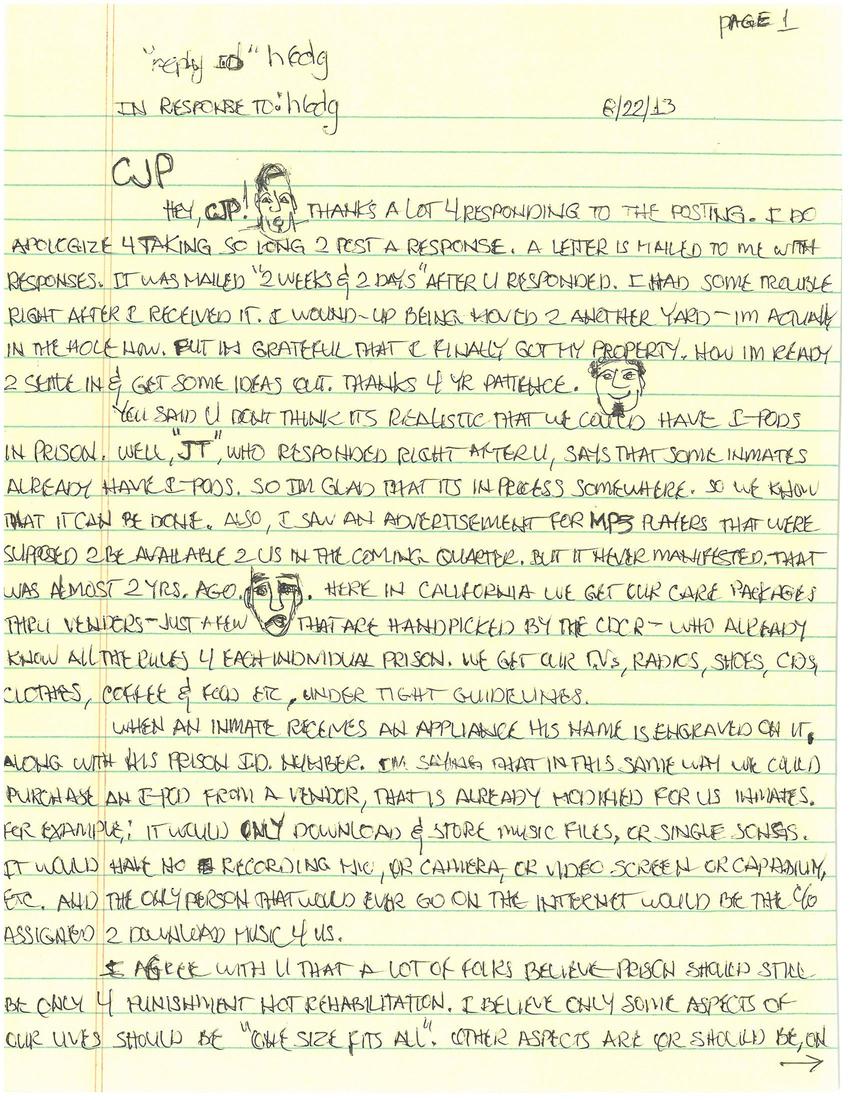 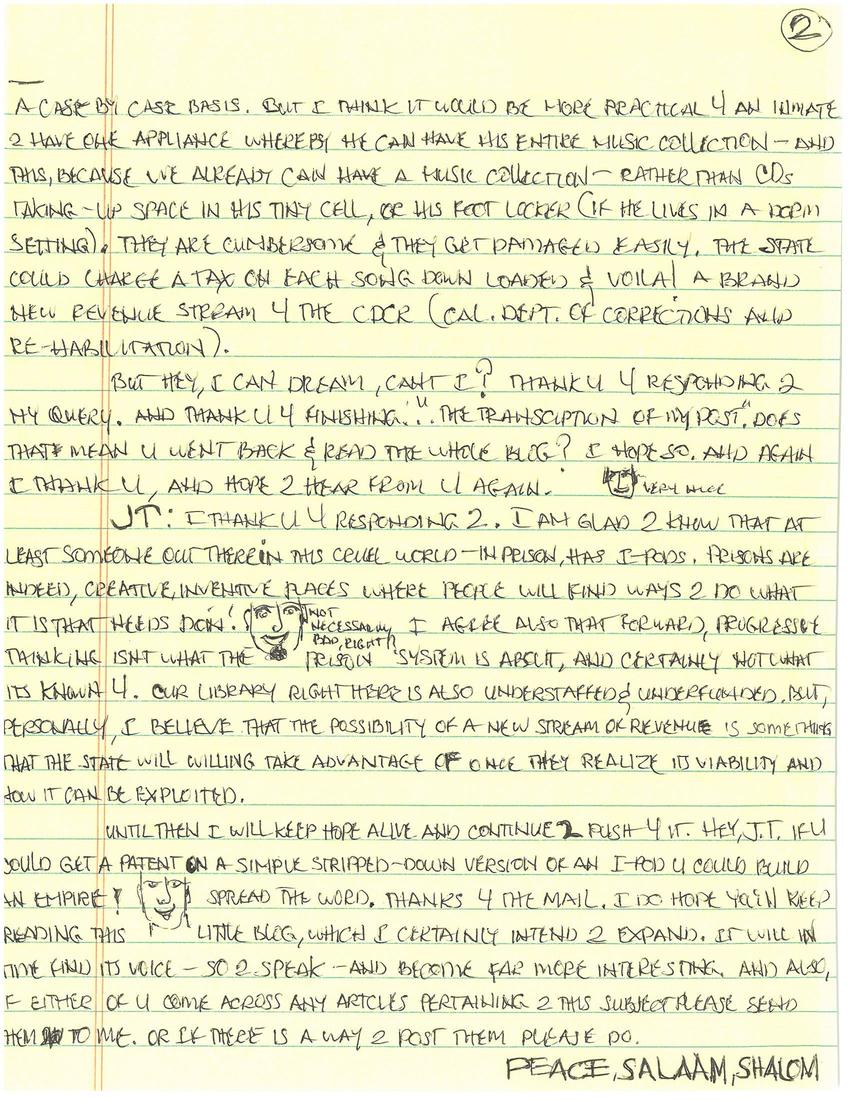 I think that there might be some change in California - I've been following what has happened in the last few months there.

I have hope that the hearings will lead somewhere (something has to change).