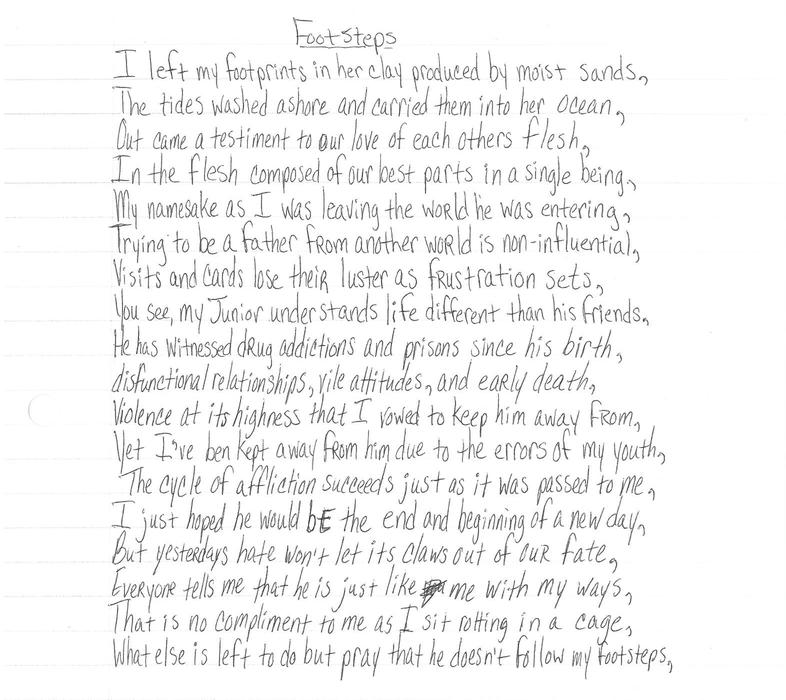 I left my footprints in her clay produced by moist sands,
The tides washed ashore and carried them into her ocean,
Out came a testament to our love of each other's flesh,
In the flesh composed of our best parts in a single being,
My namesake as I was leaving the world he was entering,
Trying to be a father from another world in non-influential,
Visits and cards lose their luster as frustration sets,
You see, my Junior understands life different than his friends,
He has witnessed drug addictions and prisons since his birth,
dysfunctional relationships, vile attitudes, and early death,
Violence at its highness that I vowed to keep him away from,
Yet I've been kept away from him due to the errors of my youth,
The cycle of affliction succeeds just as it was passed to me,
I just hoped he would be the end and beginning of a new day,
But yesterday's hate won't let its claws out of our fate,
Everyone tells me that he is just like me with his ways,
That is no compliment to me as I sit rotting in a cage,
What else is left to do but pray that he doesn't follow my footsteps?