Young Prisoners Need Help, From Inside and Out 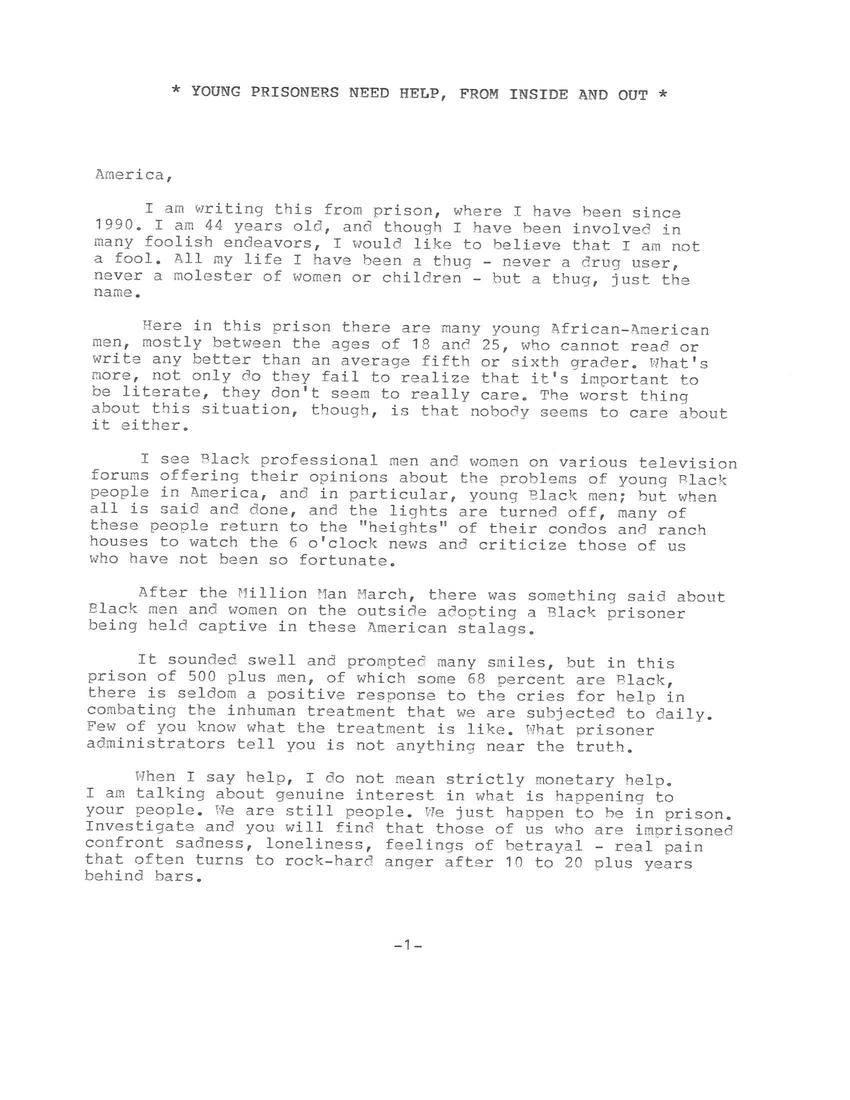 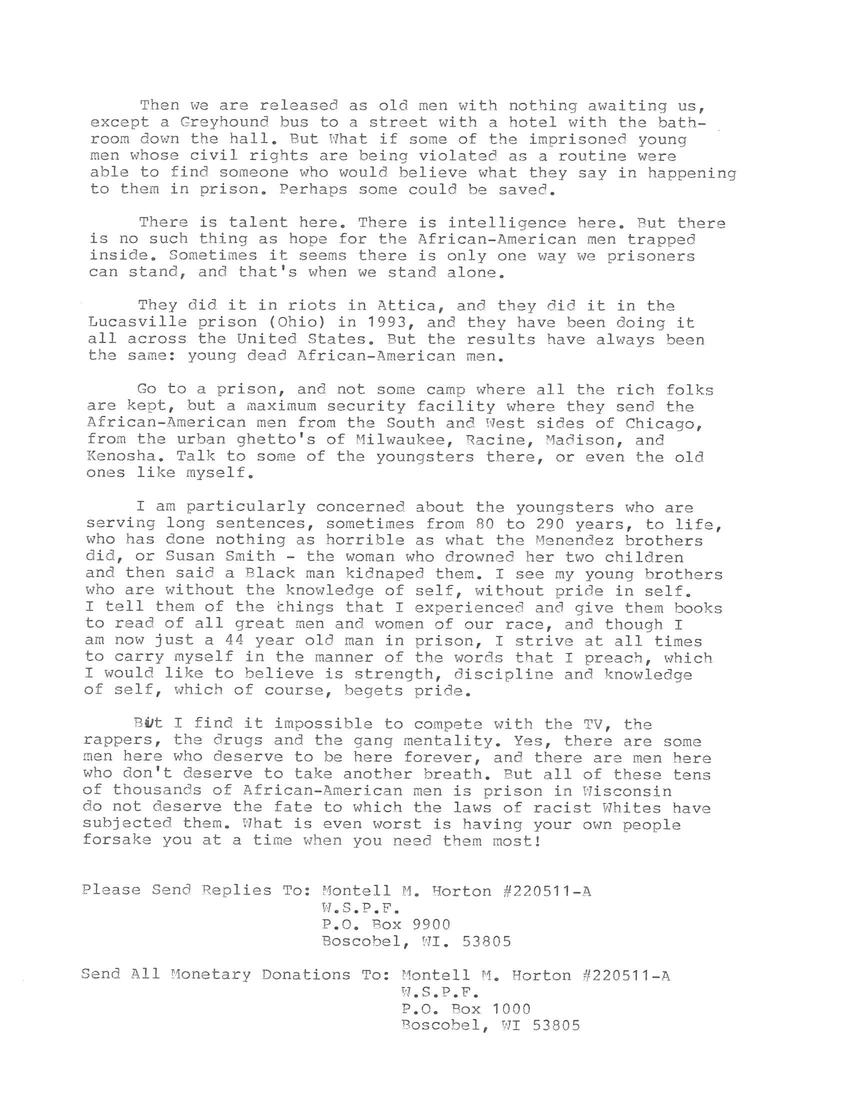 *YOUNG PRISONERS NEED HELP, FROM INSIDE AND OUT*

I am writing this from prison, where I have been since 1990. I am 44 years old, and though I have been involved in many foolish endeavors, I would like to believe that I am not a fool. All my life I have been a thug - never a drug user, never a molester of women or children - but a thug, just the same.

Here in this prison there are many young African-American men, mostly between the ages of 18 and 25, who cannot read or write any better than an average fifth or sixth grader. What's more, not only do they fail to realize that it's important to be literate, they don't seem to really care. The worst thing about this situation, though, is that nobody seems to care about it either.

I see Black professional men and women on various television forums offering their opinions about the problems of young Black people in America, and in particular, young Black men; but when all is said and done, and the lights are turned off, many of these people return to the "heights" of their condos and ranch houses to watch the 6 o'clock news and criticize those of us who have not been so fortunate.

After the Million Man March, there was something said about Black men and women on the outside adopting a Black prisoner being held captive in these American stalags.

It sounded well and prompted many smiles, but in this prison of 500 plus men, of which some 68 percent are Black, there is seldom a positive response to the cries for help in combating the inhuman treatment that we are subjected to daily. Few of you know what the treatment is like. What prisoner administrators tell you is not anything near the truth.

When I say help, I do not mean strictly monetary help. I am talking about genuine interest in what is happening to your people. We are still people. We just happen to be in prison. Investigate and you will find that those of us who are imprisoned confront sadness, loneliness, feelings of betrayal - real pain that often turns to rock-hard anger after 10 to 20 plus years behind bars.

Then we are released as old men with nothing awaiting us, except a Greyhound bus to a street with a hotel with the bathroom down the hall. But what if some of the imprisoned young men whose civil rights are being violated as a routine were able to find someone who would believe what they say is happening to them in prison. Perhaps some could be saved.

There is talent here. There is intelligence here. But there is no such thing as hope for the African-American men trapped inside. Sometimes it seems there is only one way we prisoners can stand, and that's when we stand alone.

They did it in riots in Attica, and they did it in the Lucasville prison (Ohio) in 1993, and they have been doing it all across the United States. But the results have always been the same: young dead African-American men.

Go to a prison, and not some camp where all the rich folks are kept, but a maximum security facility where they send the African-American men from the South and West sides of Chicago, from the urban ghettos of Milwaukee, Racine, Madison, and Kenosha. Talk to some of the youngsters there, or even the old ones like myself.

I am particularly concerned about the youngsters who are serving long sentences, sometimes from 80 to 290 years, to life, who has done nothing as horrible as what the Menendez brothers did, or Susan Smith - the woman who drowned her two children and then said a Black man kidnapped them. I see my young brothers who are without the knowledge of self, without pride in self. I tell them of the things that I experienced and give them books to read of all great men and women of our race, and though I am now just a 44 year old man in prison, I strive at all times to carry myself in the manner of the words that I preach,which I would like to believe is strength, discipline and knowledge of self, which of course, begets pride.

But I find it impossible to compete with the TV, the rappers, the drugs and the gang mentality. Yes, there are some men here who deserve to be here forever, and there are men here who don't deserve to take another breath. But all of these tens of thousands of African-American men in prison in Wisconsin do not deserve the fate to which the laws of racist Whites have subjected them. What is even worse is having your own people forsake you at a time when you need them most!

hi, I know your son very well, I am married to M.C Simmons an we was reading what you wrote an feel that what you wrote is true when the lights go out the world close you out until the next time that they hear something bad about a black man. thank you for sharing that with us....... you can write if you can at.
M.C Simmons
743 8th st.
Beloit,wi
53511

keep you head up, god bless you....
Hello Dad it,s your son Montell Jr. I am sooo sorry for my non compliance and Simply not being in tune with you. It saddens me to hear whats going on in these prisons to our black men, young and old. Let alone my own Father:(
Interesting but unimaginable what is going on in there to you. As I experience racism on the outside,young black and Gay. I feel I haven't done enough for you. I want to do what I ca tohelp you out....I wish I was a lawyer by now. Dad its time for me to get back in tune with you,anything I can do I will. This is my new address
3022 W. Pierce St. #25 414 499 9399 Montell
Milwaukee WI 53215 I love you. You Stay Strong~
Dad You Really touched my heart with your Story!!! Montell Horton Jr.
My Brother,
As I read the words from your son and his love for you, i cannot help but feel the love of a brother I have for you. I am 70 years old now and a Christian who is preparing her mind and heart to meet my Savior. If I lived 20 more years, it would not be enough time to praise Him for all He has done for me. You were a blessing. You had no idea that you took me through my hardest times. I could have lived that life forever. But all things come to an end. But my love for you was deeply hidden. It still kept me going. I never wanted you to be a boyfriend.. I just needed to be loved. Regardless of the lies your letters got me through. Just want you to know you are special and God loves you as I do.