The Failures Of Capital Punishment 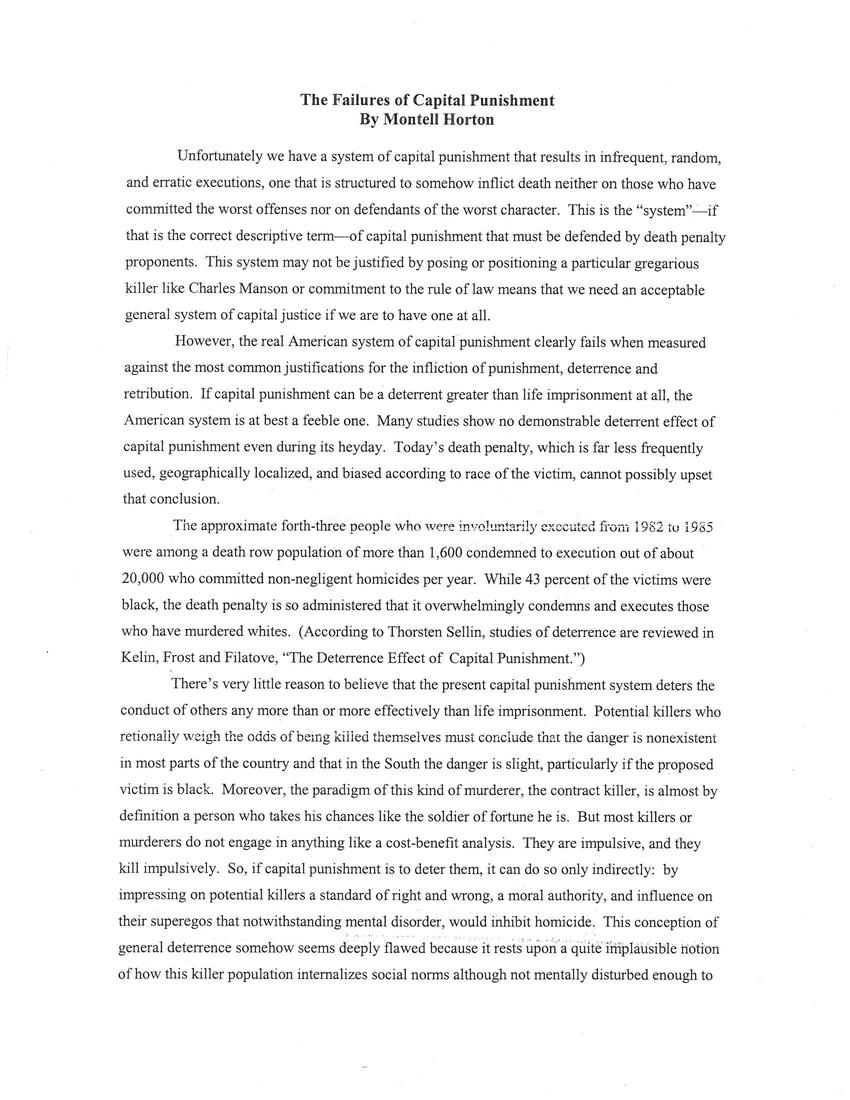 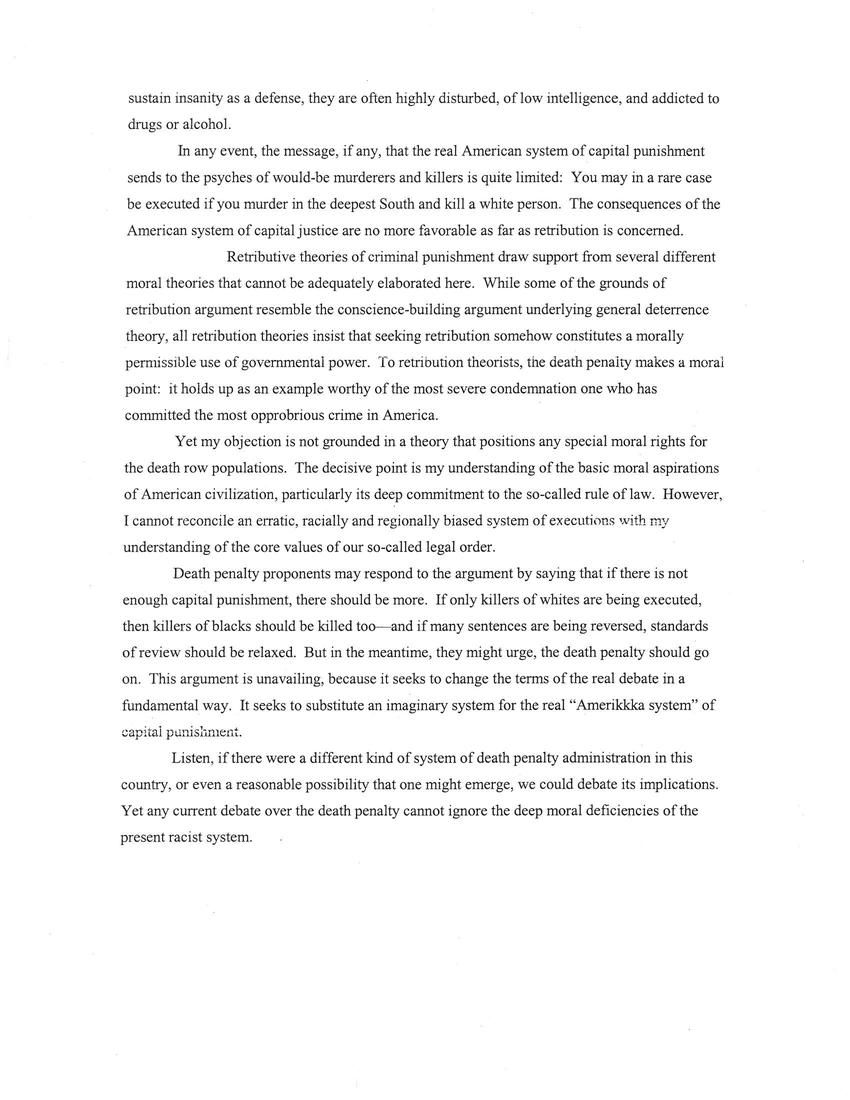 The Failures of Capital Punishment
By Montell Horton

Unfortunately we have a system of capital punishment that results in infrequent, random, and erratic executions, one that is structured to somehow inflict death neither on those who have committed the worst offenses nor on defendants of the worst character. This is the "system"—if that is the correct descriptive term—of capital punishment that must be defended by death penalty proponents. This system may not be justified by posing or positioning a particular gregarious killer like Charles Manson or commitment to rule of law means that we need an acceptable general system of capital justice if we are to have one at all.

The approximate forth-three people who were involuntarily executed from 1982 to 1985 were among a death row population of more than 1,600 condemned to execution out of about 20,000 who committed non-negligent homicide per year. While 43 percent of the victims were black, the death penalty is so administered that it overwhelmingly condemns and executes those who have murdered whites. (According to Thorsten Sellin, the studies of deterrence are reviewed in Kelin, Frost, and Filatove, "The Deterrence Effect of Capital Punishment.")

There's very little reason to believe that the present capital punishment system deters the conduct of others any more than or more effectively than life imprisonment. Protential killers who retionally weight the odds of being killed themselves must conclude that the danger is nonexistent in most parts of the country and that, in the South, that danger is slight, particularly if the proposed victim is black. Moreover, the paradigm of this kind of murderer, the contract killer, is almost by definition a person who takes his chances like the soldier of fortune he is.

But most killers or murderers do not engage in anything like a cost-benefit analysis. They are impulsive, and they kill impulsively. So, if capital punishment is to deter them, it can do so only indirectly: by impressing on potential killers a standard of right and wrong, a moral authority, and influence on their superegos that, notwithstanding mental disorder, would inhibit homicide. The conception of general deterrence somehow seems deeply flawed because it rests upon a quite implausible notion of how this killer population internalizes social norms. Although they are not mentally disturbed enough to sustain insanity as a defense, they are often highly disturbed, of low intelligence, and addicted to drugs or alcohol.

In any event, the message, if any, that the real American system of capital punishment sends to the psyches of would-be murderers and killers is quite limited. You may in a rare case be executed if you murder in the deepest South and kill a white person. The consequences of the American system of capital justice are no more favorable as a far as retribution is concerned.

Retributive theories of criminal punishment draw support from several different moral theories that cannot be adequately elaborated here. While some of the grounds of retribution argument resemble the conscience-building argument underlying the general deterrence theory, all retribution theories insist that seeking retribution somehow constitutes a morally permissible use of governmental power. To retribution theorists, the death penalty makes a moral point; it holds up as an example worthy of the most severe condemnation, one who has committed the most opprobrious crime in America.

Yet my objection is not grounded in a theory that positions any special moral rights for the death row populations. The decisive point is my understanding of the basic moral aspirations of American civilization, particularly its deep commitment to the so-called rule of law. However, I cannot reconcile an erratic, racially, and regionally biased system of executions with my understanding of the core values of our so-called legal order.

Death penalty proponents may respond to the argument by saying that if there is not enough capital punishment, there should be none. If only killers of whites are being executed, then killers of blacks should be killed too—and if many sentences are being reversed, standards of reviews should be relaxed. But in the meantime, they might urge, the death penalty should go on. This argument is unavailing because it seeks to change the terms of the real debate in a fundamental way. It seeks to substitute an imaginary system for the real "Amerikkka system" of capital punishment.

Listen: if there were a different kind of system of death penalty administration in this country or even a reasonable possibility that one might emerge, we could debate its implications. Yet any current debate over the death penalty cannot ignore the deep moral deficiencies of the present racist system.