Does the Death Penalty Deter Crime? 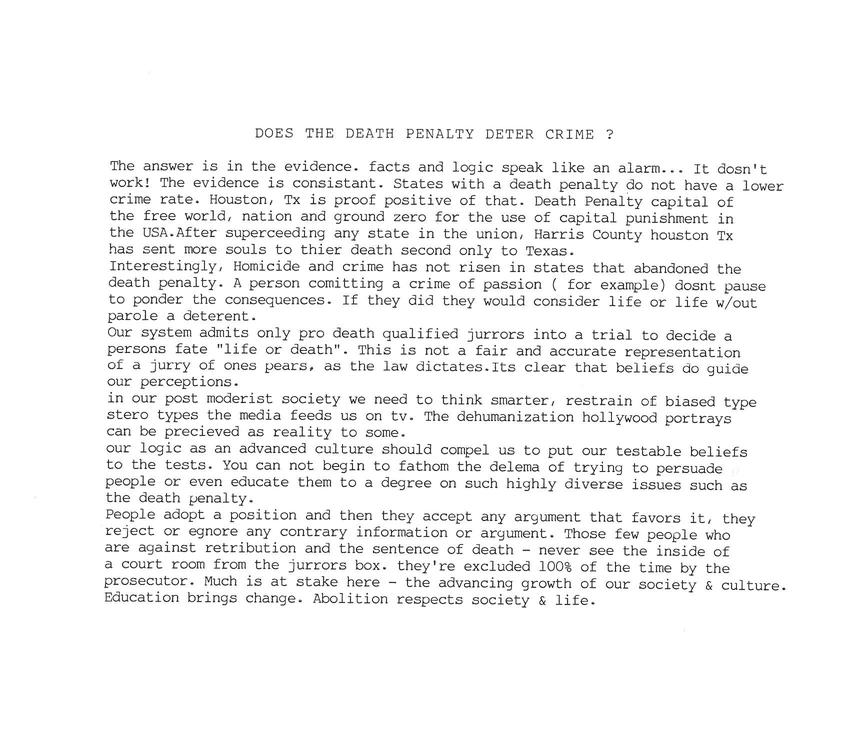 DOES THE DEATH PENALTY DETER CRIME ?

The answer is in the evidence. facts and logic speak like an alarm... It doesn't
work! The evidence is consistant. States with a death penalty do not have a lower
crime rate. Houston. Tx is proof positive of that. Death Penalty capital of
the free world. nation and ground zero for the use of capital punishment in
the USA.After superceeding any state in the union. Harris County houston Tx
has sent more souls to thier death second only to Texas.

Interestingly, Homicide and crime has not risen in states that abandoned the
death penalty. A person cmitting a crime of passion ( for example) dosnt pause
to ponder the consequences. If they did they would consider life or life w/out
parole a deterent.

Our system admits only pro death qualified jurrors into a trial to decide a
persons fate "life or death". This is not a fair and accurate representation
of a jurry of ones pears. as the law dictates.Its clear that beliefs do guide
our perceptions.

in our post moderist society we need to think smarter, restrain of biased type
stero types the media feeds us on tv. The dehumanization hollywood portrays
can be precieved as reality to some.
our logic as an advanced culture should compel us to put our testable beliefs
to the tests. You can not begin to fathm the delema of trying to persuade
people or even educate them to a degree on such highly diverse issues such as
the death penalty.

People adopt a position and then they accept any argument that favors it, they
reject or ignore any contrary information or augment. Those few people who
are against retribution and the sentence of death - never see the inside of
a court room from the jurors box. they're excluded 100% of the time by the
prosecutor. Much is at stake here - the advancing growth of our society & culture.
Education brings change. Abolition respects society & life.