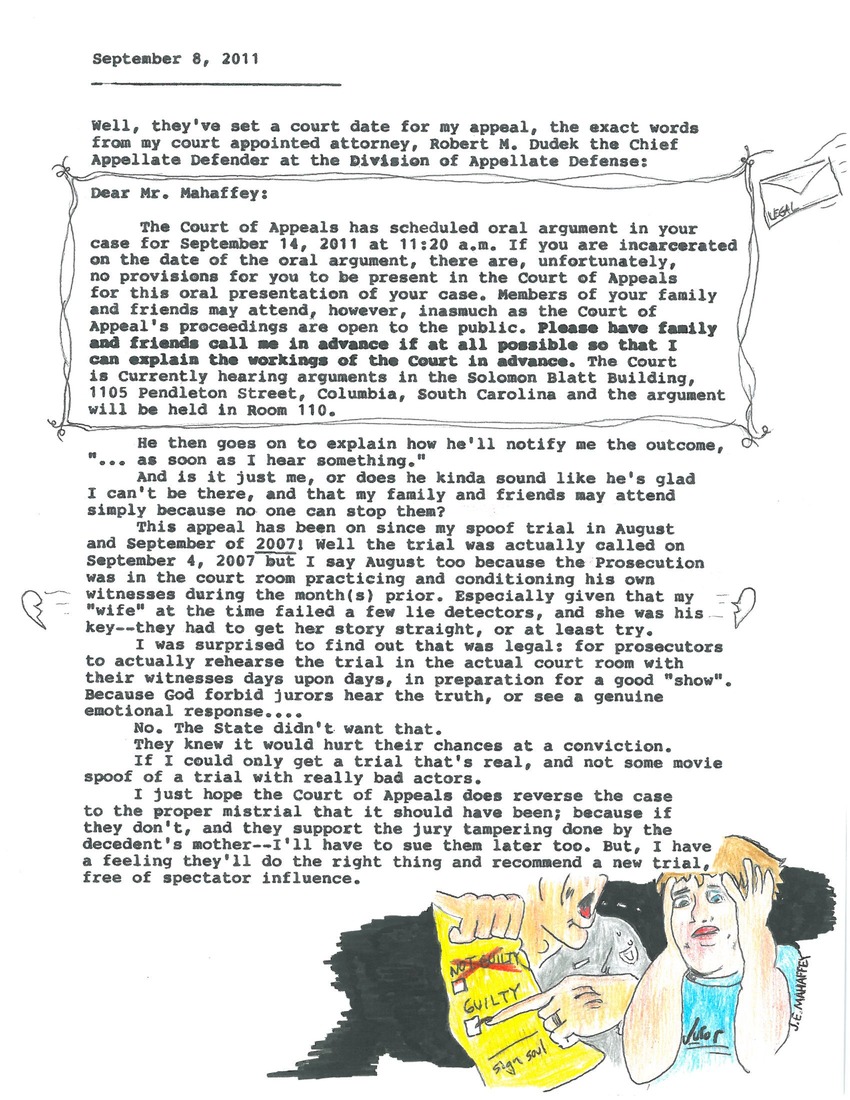 Well, they've set a court date for my appeal. The exact words from my court appointed attorney, Robert M. Dudek, the Chief Appellate Defender at the Division of Appellate Defense:

The Court of Appeals has scheduled oral argument in your case for September 14, 2011 at 11:20 a.m. If you are incarcerated on the date of the oral argument, there are, unfortunately, no provisions for you to be present in the Court of Appeals for this oral presentation of your case. Members of your family and friends may attend, however, inasmuch as the Court of the Appeal's proceedings are open to the public. Please have family and friends call me in advance if at all possible so that I can explain the workings of the court in advance. The court is currently hearing arguments in the Solomon Blatt building, 1105 Pendleton Street, Columbia, South Carolina and the argument will be held in Room 110."

He then goes on to explain how he'll notify me the outcome, "...as soon as I hear something."

And is it just me, or does he kinda sound like he's glad I can't be there, and that my family and friends may attend simply because no one can stop them?

This appeal has been on since my spoof trial in August and September 2007! Well, the trial was actually called on September 4, 2007, but I say August too because the prosecution was in the court room practicing and conditioning his own witnesses during the month(s) prior. Especially given my "wife" at the time failed a few lie detectors, and she was his key—they had to get her story straight, or at least try.

I was surprised to find out that was legal, for prosecutors to actually rehearse the trial in the actual courtroom with their witnesses days upon days in preparation for a "good show". Because God forbid jurors hear the truth or see a genuine emotional response...

No. The state didn't want that. They knew it would hurt their chances at a conviction. If I could only get a trial that's real and not some movie spoof of a trial with really bad actors.

I just hope the Court of Appeals does reverse the case to the proper mistrial that it should have been. Because if they don't and they support the jury tempering done by the decedent's mother, I'll have to sue them later too. But I have a feeling they'll do the right thing and recommend a new trial free of spectator influence.