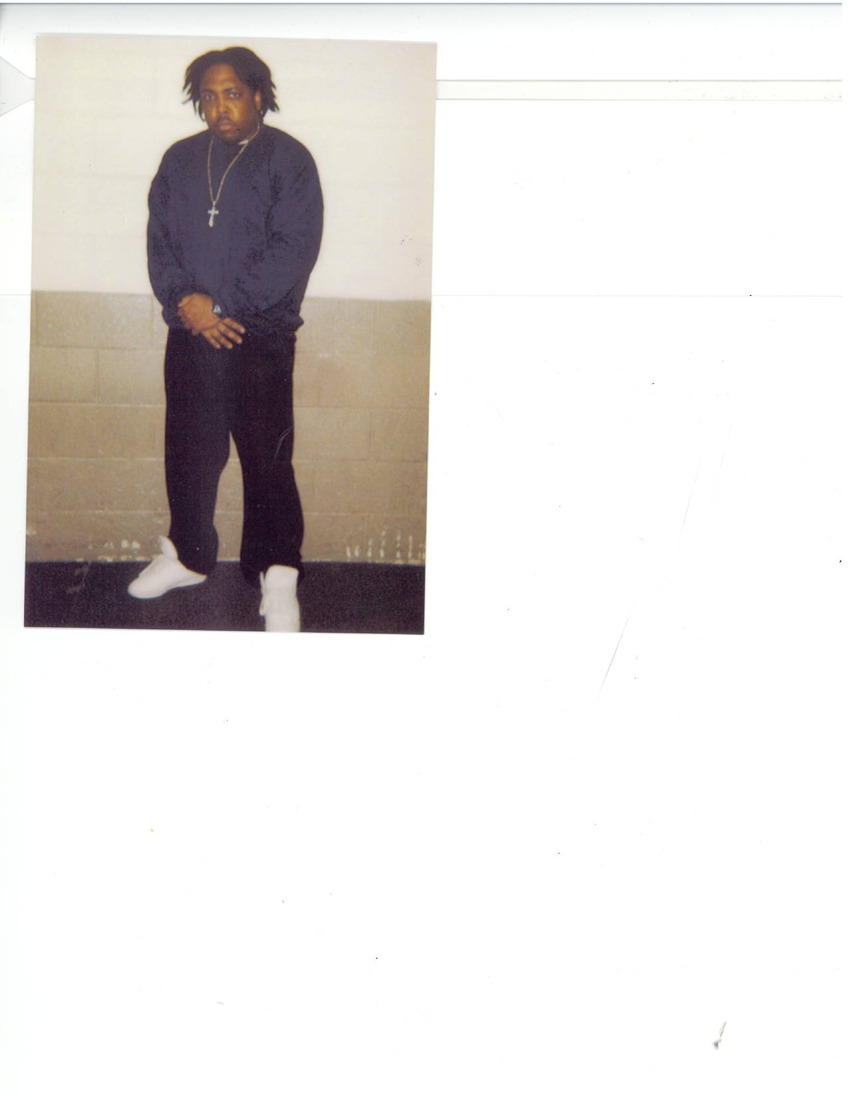 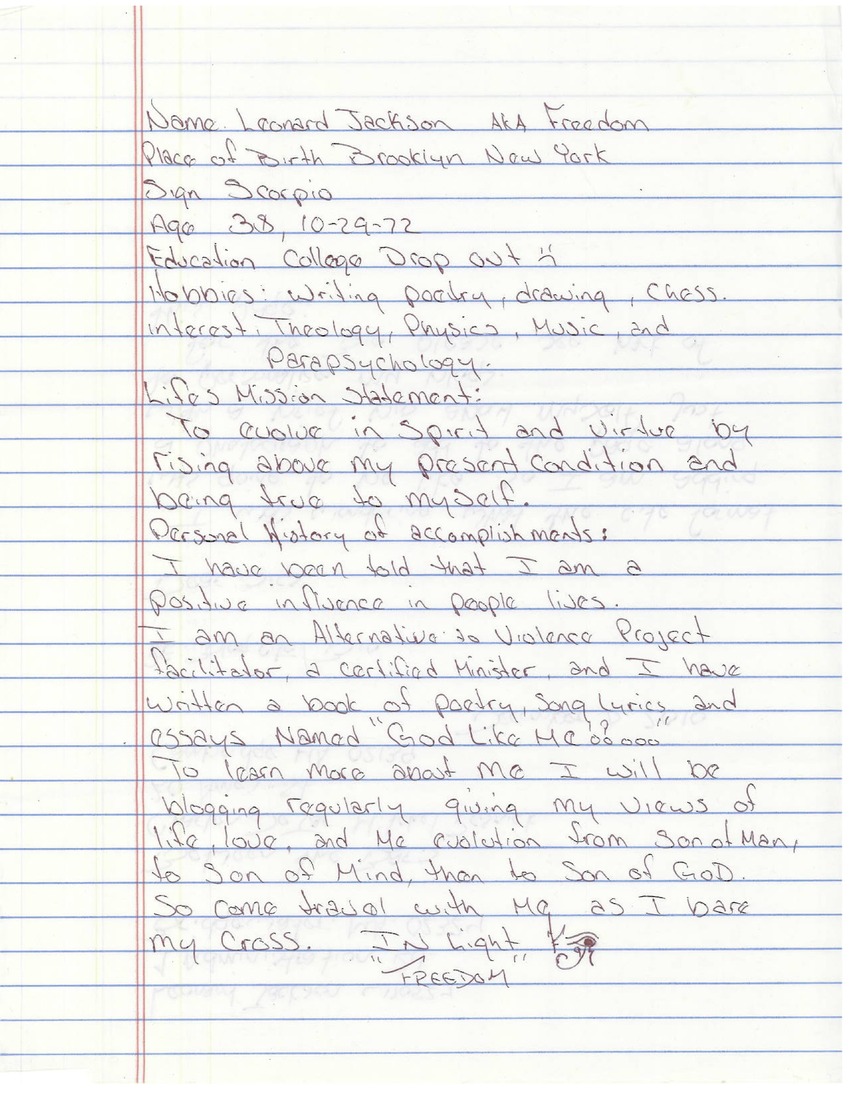 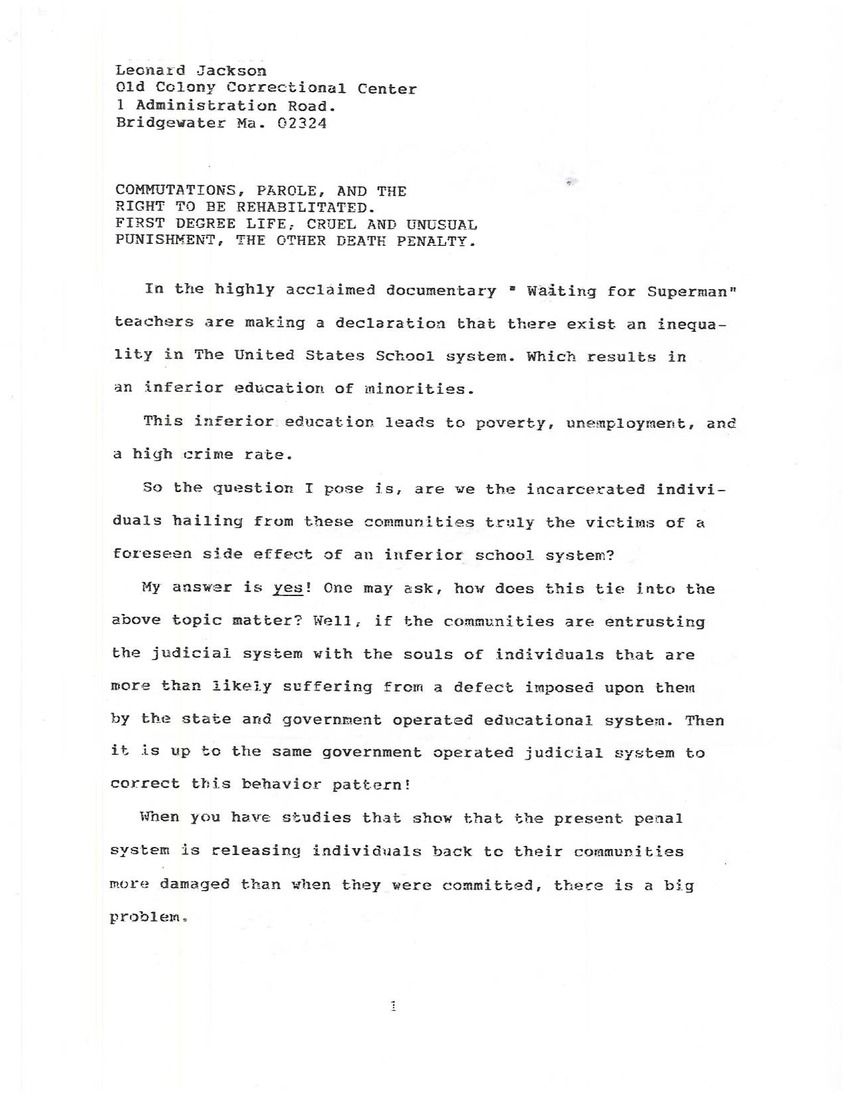 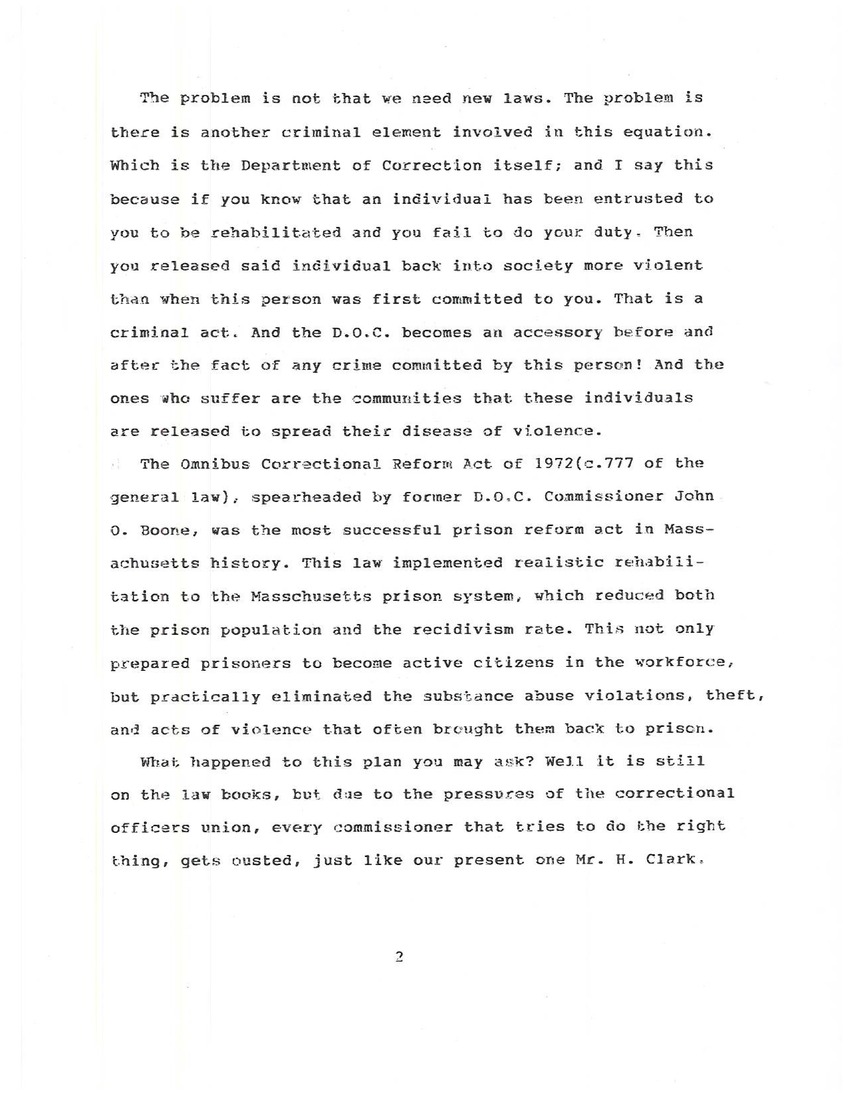 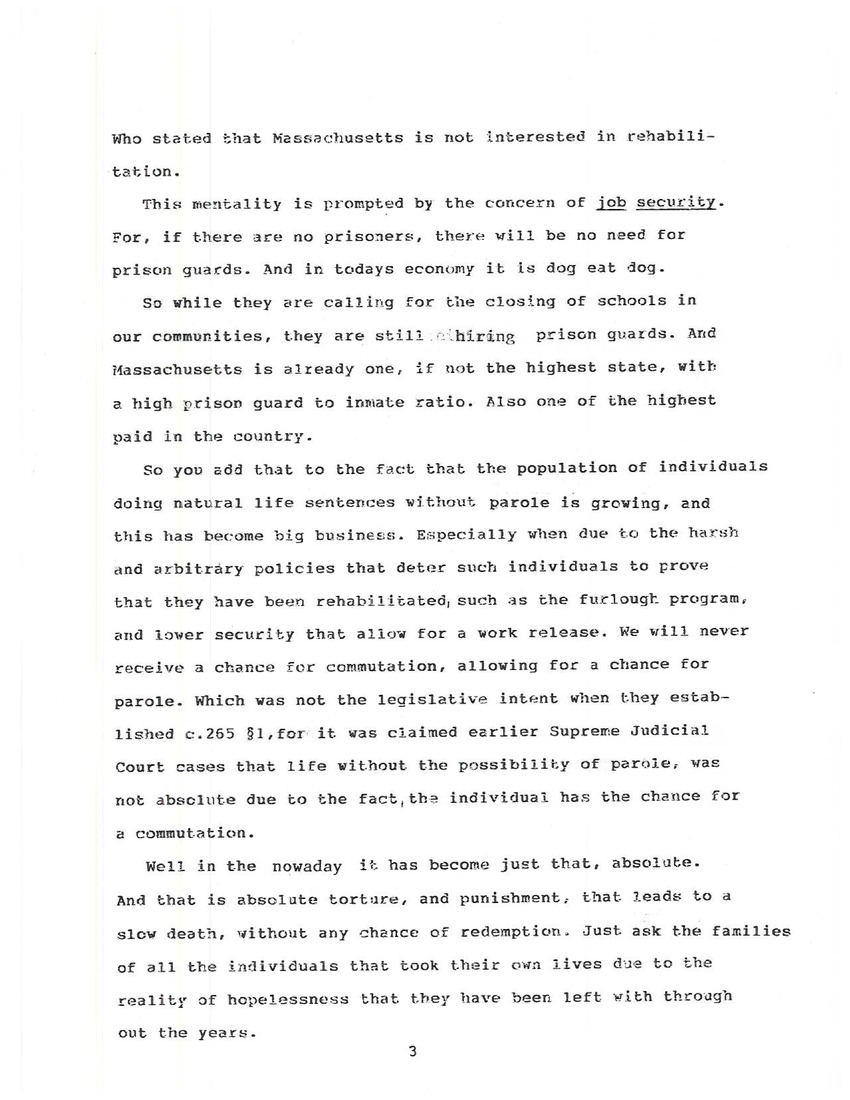 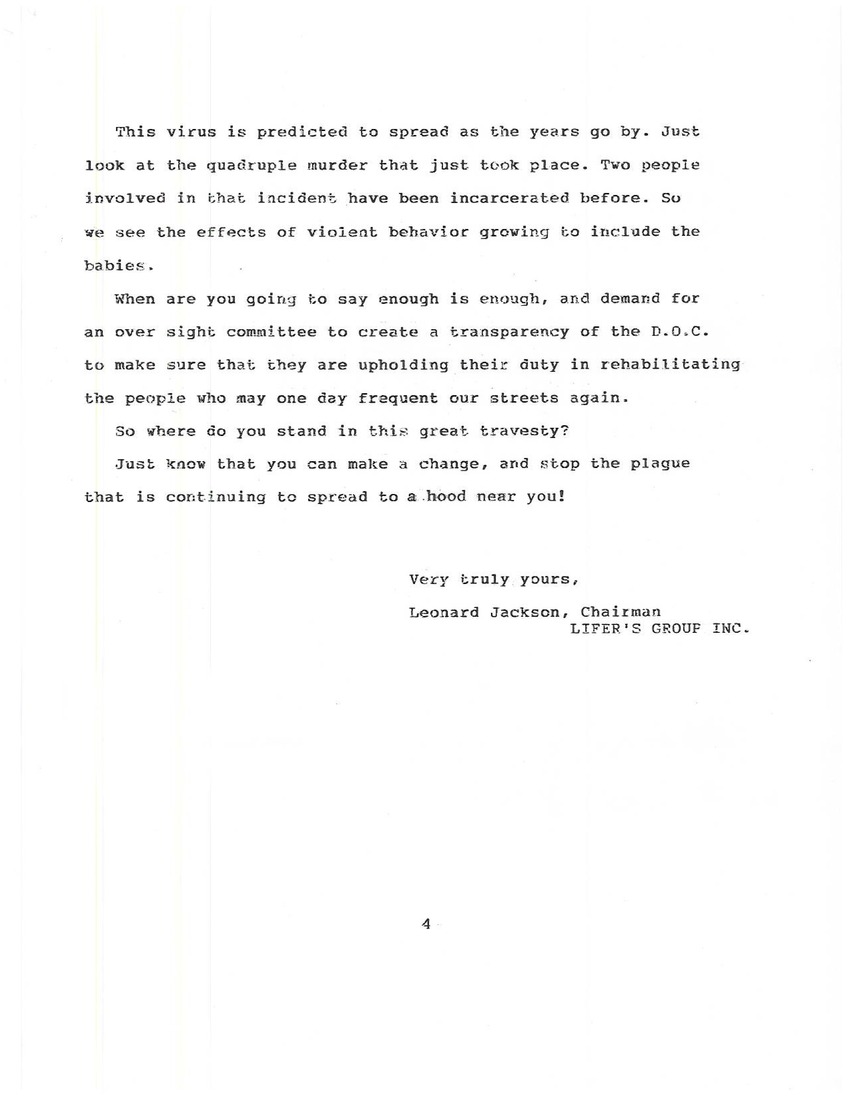 Name: Leonard Jackson AKA Freedom
Place of birht: Brooklyn, New York
Sign: Scorpio
Age: 38, 10-29-72
Education: College drop out :(
Hobbies: Writing poetry, drawing, chess.
Interests: Theology, physics, music and parapsychology.
Life's mission statement: To evolve in spirit and virtue by rising above my present condition and being true to myself.
Personal history of accomplishments: I have been told that I am a positive influence in people's lives. I am an Alternative to Violence project facilitator, a certified minister, and I have written a book of poetry, song lyrics and essays names "God Like Me..."

To learn more about me I will be blogging regularly giving my views of life, love and my evolution from son of man, to son of mind, then to son of God. So come travel with me as I bare my cross.

Commutations, Parole, and the Right to be Rehabilitated.
First degree life, cruel and unusual punishment, the other death penalty.

In the highly acclaimed documentary "Waiting for Superman" teachers are making a declaration that there exist an inequality in the United States school system. Which results in an inferior education of minorities.

This inferior education leads to poverty, unemployment, and a high crime rate.

So the question I pose is, are we the incarcerated individuals hailing from these communities truly the victimes of a foreseen side effect of an inferior school system?

My answer is YES! One may ask, how does this tie into the above topic matter? Well, if the communities are entrusting the judicial system with the souls of individuals that are more likely suffering from a defect imposed upon them by the state and government operated educational system. Then it is up to the same government operated judicial system to correct this behavior pattern!

When you have studies that show that the present penal system is releasing individuals back to their communities more damaged than when they were committed, there is a big problem.

The problem is not that we need new laws. The problems is there is another criminal element involved in this equation. Which is the department of correction itself; and I say this because if you know that an individual has been entrusted to you to be rehabilitated and you fail to do your duty. Then you released said individual back into society more violent than when this person was first committed to you. That is a criminal act. And the D.O.C. becomes an accessory before and after the fact of any crime committed by this person! And the ones who suffer are the communities that these individuals are released to spread their disease of violence.

The Omnibus Correctional Reform Act of 1972(c.777 of the general law), spearheaded by former D.O.C. Commissioner John O. Boone, was the most successful prison reform act in Massachusetts history. This law implemented realistic rehabilitation to the Massachusetts prison system, which reduced both the prison population and the recidivism rate. This not only prepared prisoners to become active citizens in the workforce, but practically eliminated the substance abuse violations, theft, and acts of violence that often brought them back to prison.

What happened to this plan you may ask? Well it is still on the law books, but due to the pressures of the correctional officers union, every commissioner that tries to do the right thing gets ousted, just like our present one Mr. H. Clark who stated that Massachusetts is not interested in rehabilitation.

This mentality is prompted by the concern of JOB SECURITY. For, if there are no prisoners, there will be no need for prison guards. And in today's economy it is dog eat dog.

So while they are calling for the closing of schools in our communities, they are still hiring prison guards. And Massachusetts is already one, if not the highest state, with a high prison guard to inmare ration. Also one of the highest paid in the country.

So you add that to the fact that the population of individuals doing natural life sentences without parole is growing, and this has become big business. Especially when due to the harsh and arbitrary policies that deter such individuals to prove that they have been rehabilitated such as the furlough program, and lower security that allow for a work release. We will never receive a chance for commutation, allowing for a chance for parole. Which was not the legislative intent when the established c.265 1, for it was claimed earlier Supreme Judicial Court cases that life without the possibility of parole, was not absolute due to the fact the individual has the chance for a commutation.

Well in the nowaday it has become just that, absolute. And that is absolute tortue, and punishment, that leads to a low death, without any chance of redemption. Just ask the families of all the individuals that took their own lives due to the reality of hopelessness that they have been left throughout the years.

This virus is predicted to spread as the years go by. Just look at the quadruple murder that just took place. Two people involved in that incident have been incarcerated before. So we see the effects of violent behavior growing to include the babies.

When are you going to say enough is enough, and demand for an over sight committee to create a transparency of the D.O.C. to make sure that they are upholding their duty in rehabilitating the people who may one day frequent our streets again.

So where do you stand in this great travesty?

Just know that you can make a change, and stop the plague that is continuing to spread to a hood near you!

Thanks for writing! I finished the transcription for your post.
(scanned reply – view as blog post)
uploaded Nov. 4, 2012.  Original (PDF) 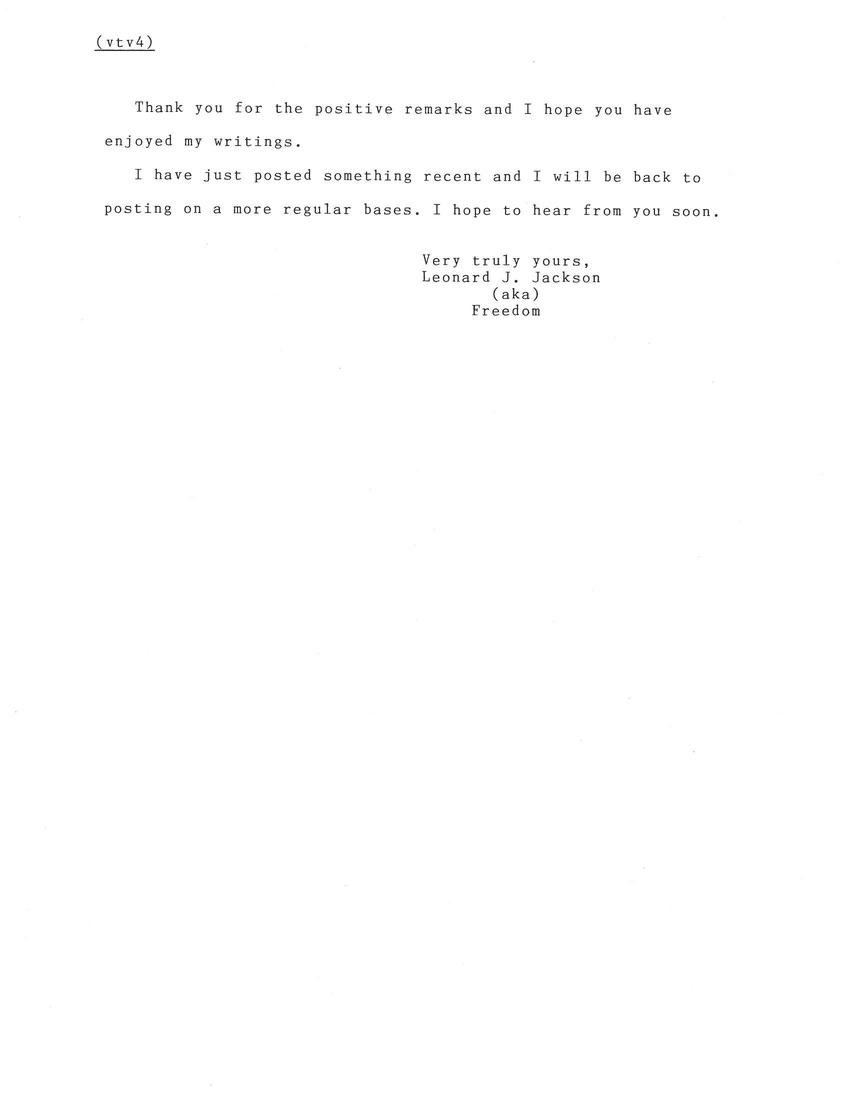