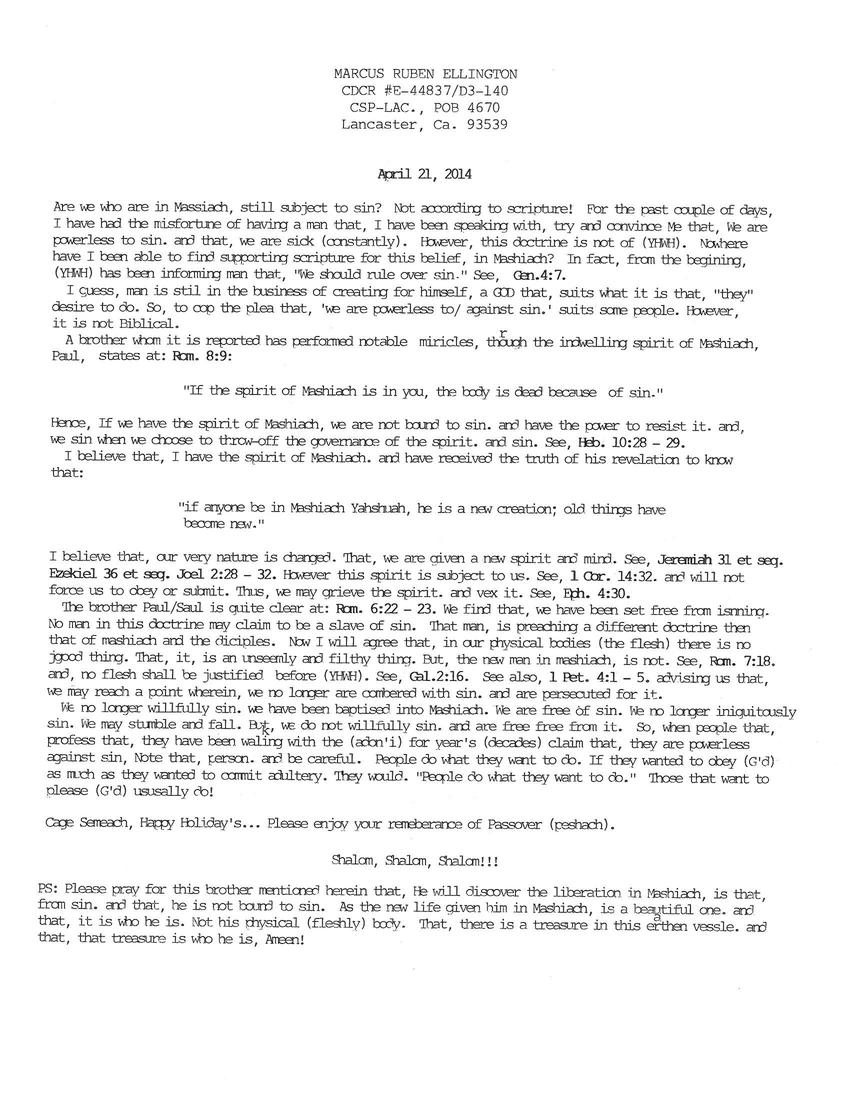 Are we who are in Massiach, still subject to sin? Not according to scripture! For the past couple of days, I have had the misfortune of having a man that, I have been speaking with, try and convince me that. we are powerless to sin. and that, we are sick (constantly). However, this doctrine is not of (YHWH). Nowhere have I been able to find supporting scripture for this belief, in Mashiach? In fact, from the bginning, (YHWH) has been informing men that, 'We should rule over sin. See, Gen 4:7.

I guess, man is still in the business of creating for himself, a GCD that, suits what it is that, "they desire to do. So, to cop the plea that, 'we are powerless to against sin.' suits some people. However, it is not biblical.

A brother who it is reported has performed notable miricles, though the indwelling spirit of Mashiach, Paul, states at: Rom 8:9:

"If the spirit of Meshiach is in you, the body is dead because of sin."

Hence, if we have the spirit of Mashiach, we are not bound to sin. and have the power to resist it. and, we sin when we choose to throw-off the governance of the spirit. and sin. See, Heb 10:28=29.

I believe that, I have the spirit of Mashiach. and have received the truth of his revelation to know that:

2If anyone be in Meshiach Yahshuah, he is a new creation; old things have become new."

I believe that, our very nature is changed. That, we are given a new spirit and mind, See, Jeremiah 31 at seq

The brother Paul/Saul is quite clear at: Rom 6:22 - 23. We find that, we have been set free from sinning. No man in this doctrine may claim to be a slave of sin. That man, is preaching a different doctrine then that of mashiach and the disciples. Now I will agree that, in our physical bodies (the flesh) there is no good thing. That, it, is an unseemly and filthy thing. But, the new man in mashiach, is not. See, Rom 7:18 and, no flesh shall be justified vbeofre (YHWH). See, Gal 2:16. See also 1 Pet 4 1-5, advising us that, we may reach a point wherein, we no longer are combered with sin. and are persecuted for it.

We no longer wilfully sin, we have been baptised into Mashiach. We are free of sin. We no longer iniquitously sin. We may stumble and fall. But, we do not wilfully sin. and are free free from it. So, when people that, profess that, they have been walking with the ado'i) for years (decades) claim that, they are powerless against sin, Note that, person, and be careful. People do what they want to do. If they wanted to obey (G'd) as much as they wanted to commit adultery. They would. "People do what they want to do." Those that want to please (G'd) usually do!