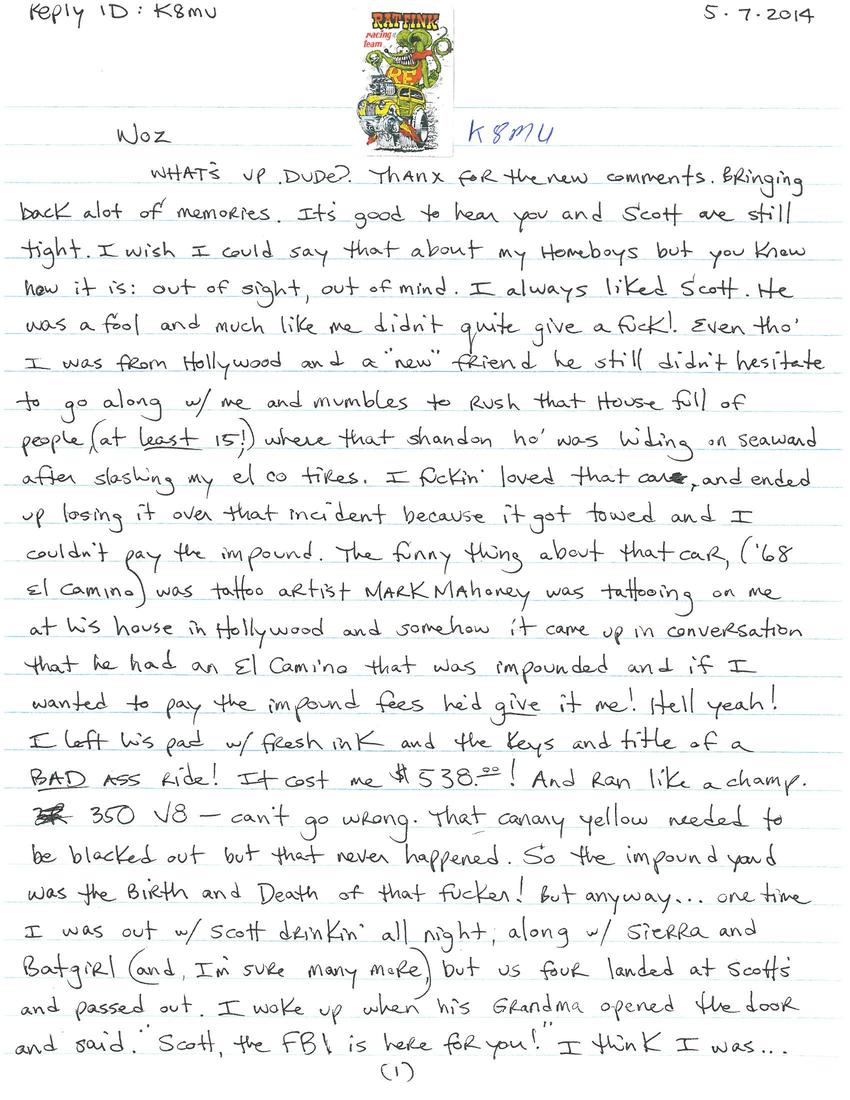 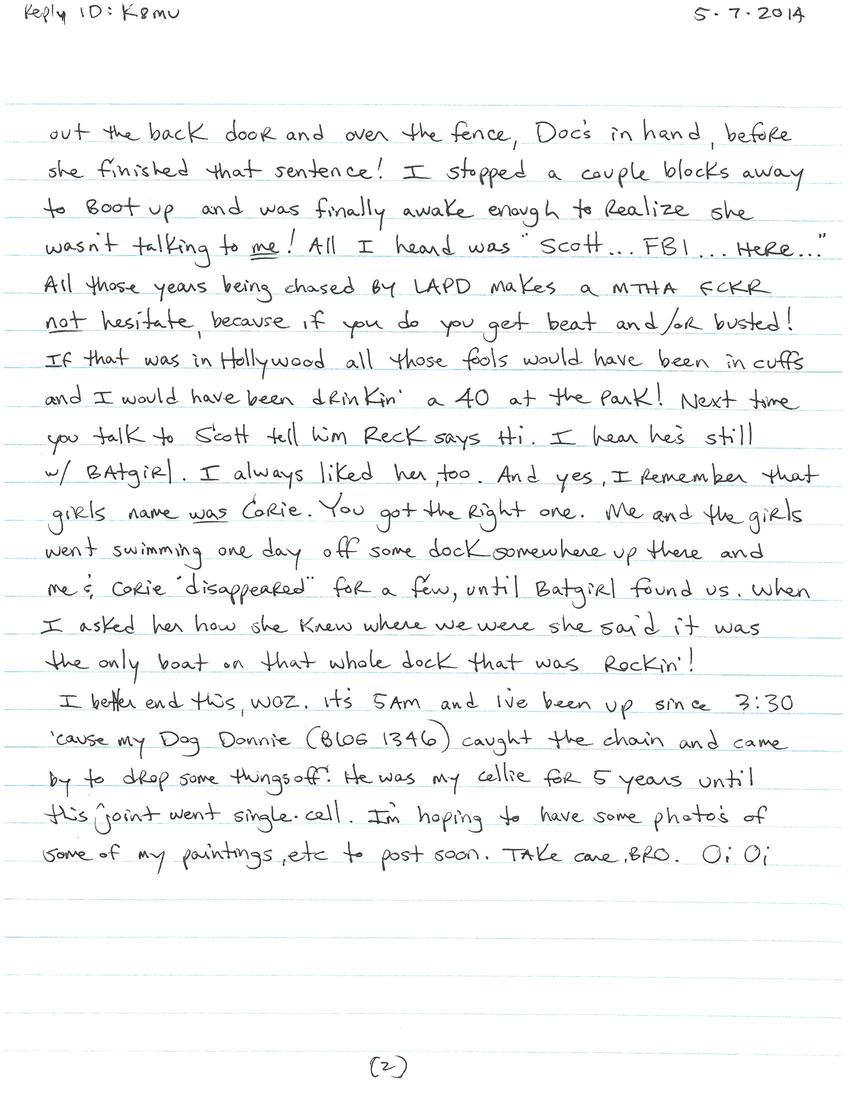 What's up, dude? Thanx for the new comments. Bringing back a lot of memories. It's good to hear you and Scott are still tight. I wish I could say that about my homeboys, but you know how it is: out of sight, out of mind. I always liked Scott. He was a fool and much like me: didn't quite give a f-ck! Even though I was from Hollywood and a "new" friend, he still didn't hesitate to go along with me and mumbles to rush that house full of people (at LEAST 15), where that shandon ho' was hiding on seaward after slashing my elco tires. I f-ckin' loved that car, and ended up losing it over that incident because it got towed and I couldn't pay the impound. The funny thing about that car, ('68 El Camino) was tattoo artist Mark Mahoney was tattoing on me at his house in Hollywood and somehow it came up in conversation that he had an El Camino that was impounded, and if I wanted to pay the impound fees he'd GIVE it to me! H-ll yeah! I left his pad with fresh ink and the keys and title of a BAD -SS ride! It cost me $538.00! And ran like a champ. 350 V8 - can't go wrong. That canary yellow needed to be blacked out, but that never happened. So the impound yard was the Birth and Death of that f-cker! But anyway...one time I was out with Scott drinkin' all night, along with Sierra and Batgirl (and I'm sure many more), but us four landed at Scott's and passed out. I woke up when his Grandma opened the door and said, "Scott, the FBI is here for you!" I think I was...out the back door and over the fence, Doc's in hand, before she finished that sentence! I stopped a couple blocks away to boot up and was finally awake enough to realize she wasn't talking to me! All I heard was "Scott...FBI..here...". All those years being chased by LAPD makes a MTHA FCKER not hesitate, because if you do you get beat and/or busted! If that was in Hollywood all those fools would have been in cuffs and I would have been drinkin' a 40 at the park! Next time you talk to Scott tell him Reck says Hi. I hear he's still with Batgirl. I always liked her, too. And yes, I remember that girl's name was Corie. You got the right one. Me and the girls went swimming one day off some dock somewhere up there, and me and Corie "disappeared" for a few, until Batgirl found us. When I asked her how she knew where we were, she said it was the only boat on that whole dock that was rockin'! I better end this, Woz. It's 5 a.m. and I've been up since 3:30, 'cause my Dog Donnie (Blog 1346) caught the chain and came by to drop some things off. He was my cellie for 5 years until this joint went single-cell. I'm hoping to have some photos of some of my paintings, etc. to post soon. Take care, BRO. Oi Oi

Ellen here. When you call me it doesn't go through. I answer and select 5 and then we get disconnected. This has happened the last 2 times you have called. Try to call again. I tried emailing your mom so she could tell you, but the email I have for her is defunct.
How are you doing? Things are busy here. I have lots of work. Yahoo!! I got your letter and will look into the clipping you sent this weekend.
It's late and I'm tired. Hope to talk to you soon. XOXO Ellen
Hey Reck, I was just thinking of you and Shooter today. Finally, after all these years I got to see more than one. I didn't pay that much attention to them. The pictures in my mind are better. Hoping they will flash back ad you.