Justice Is A Lie! 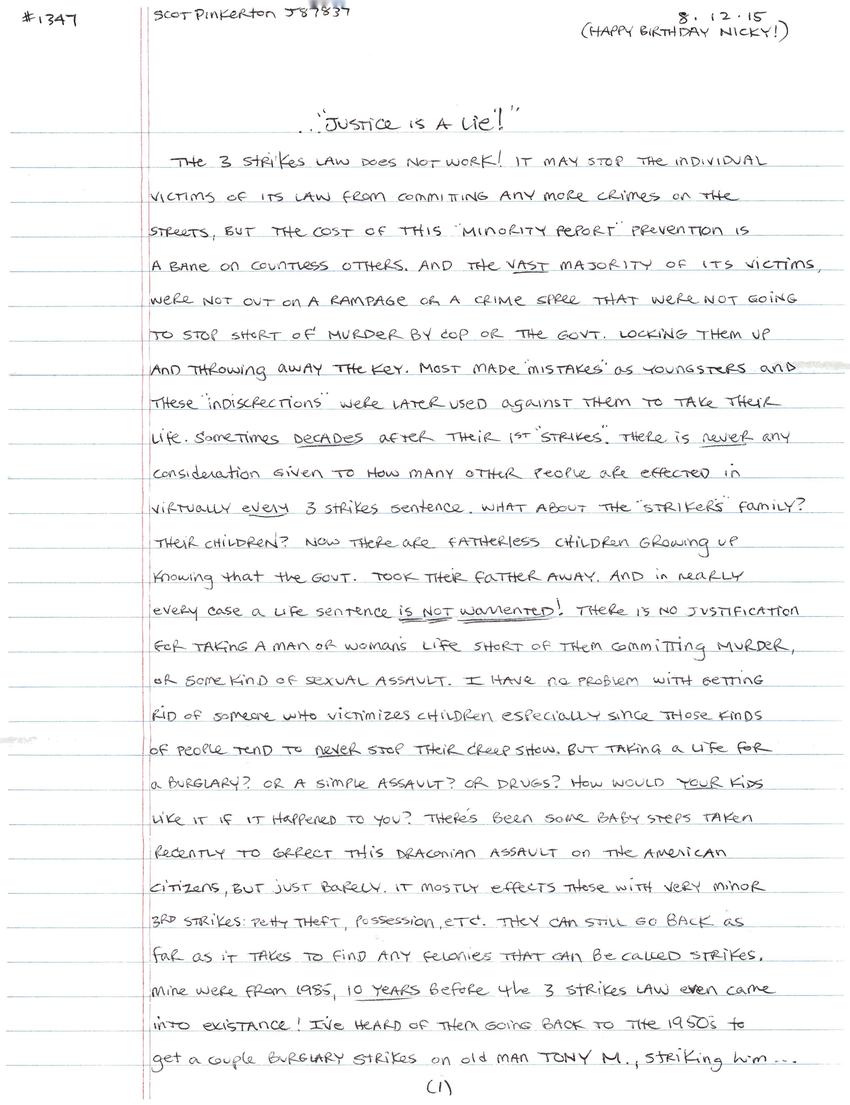 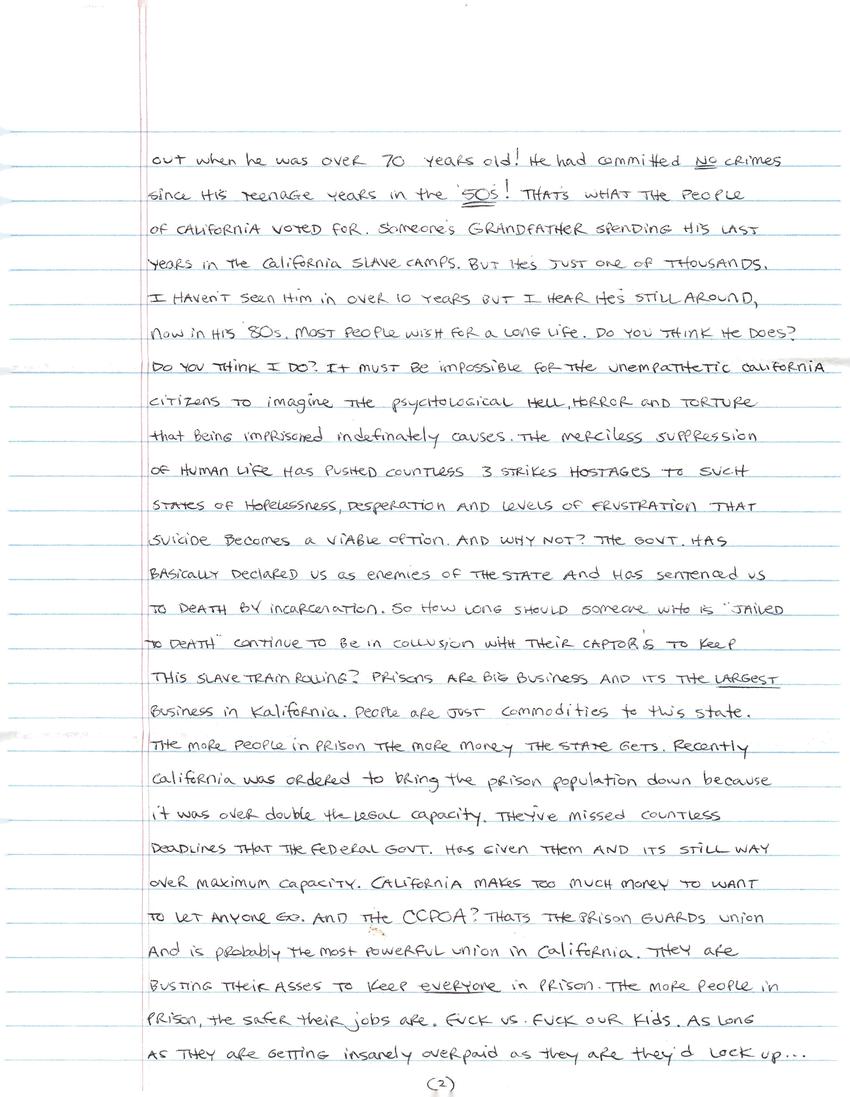 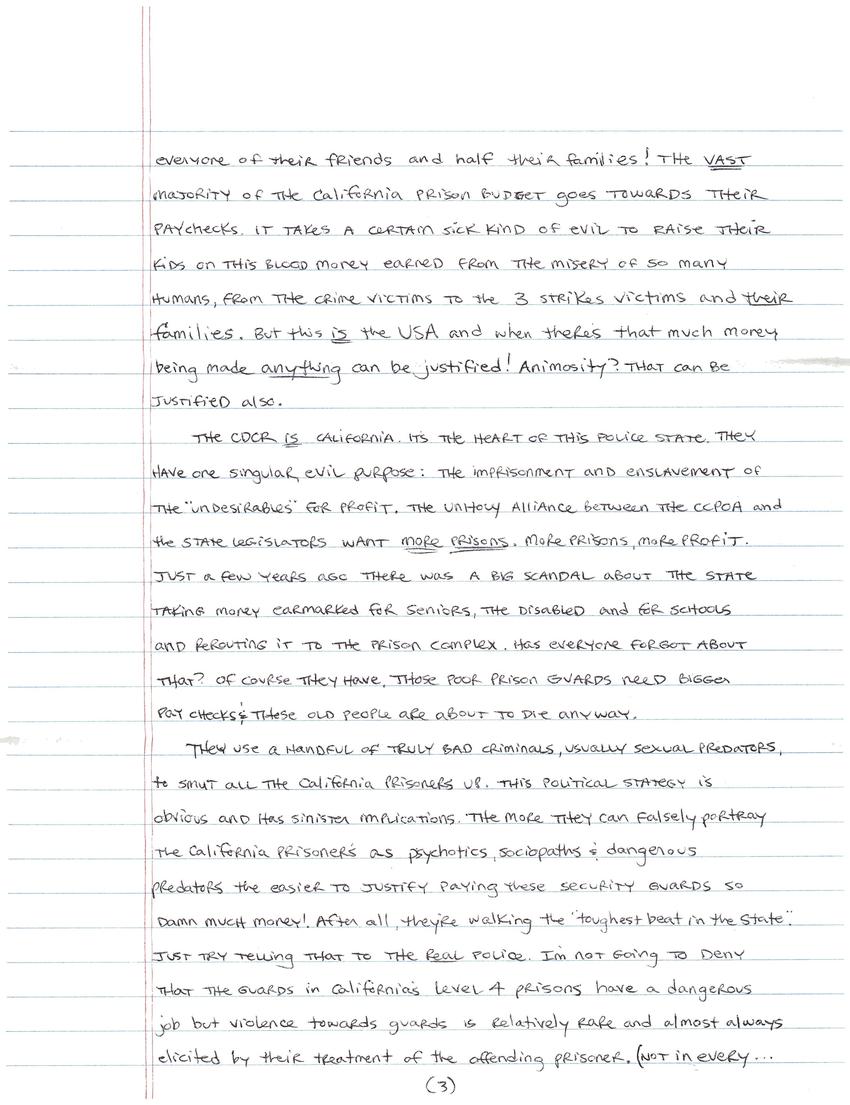 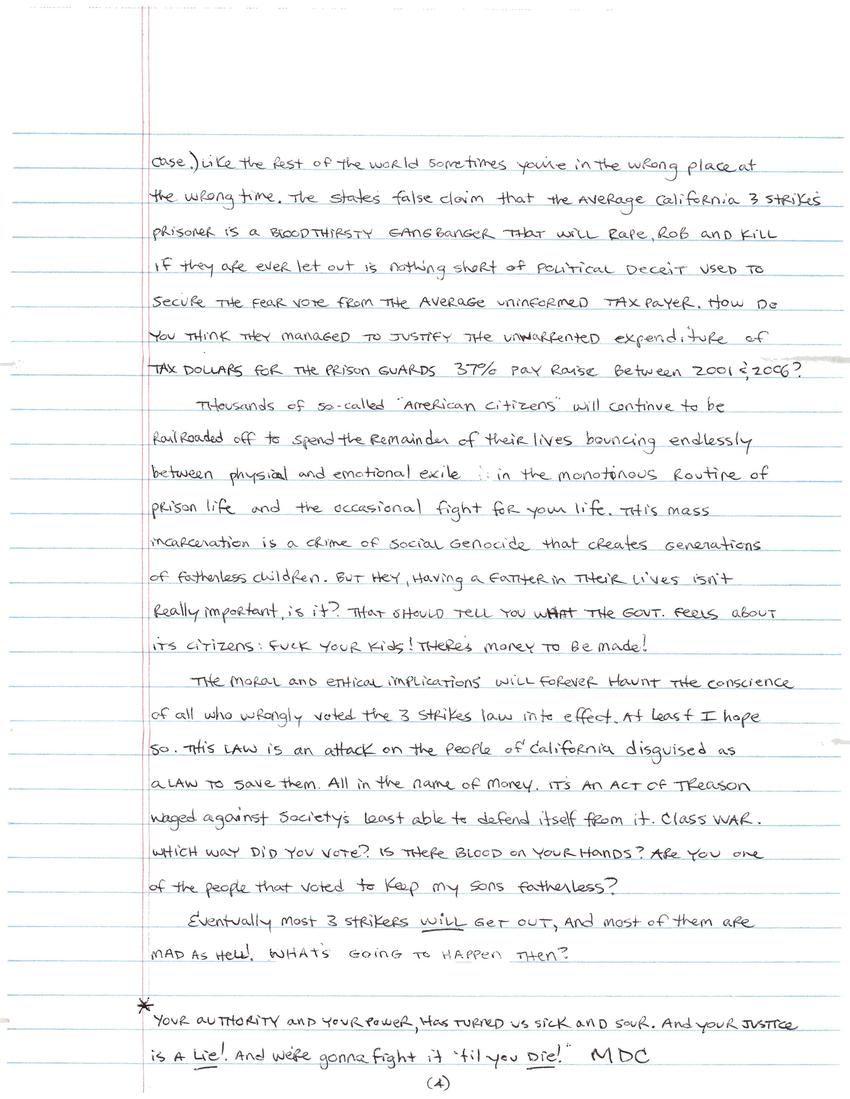 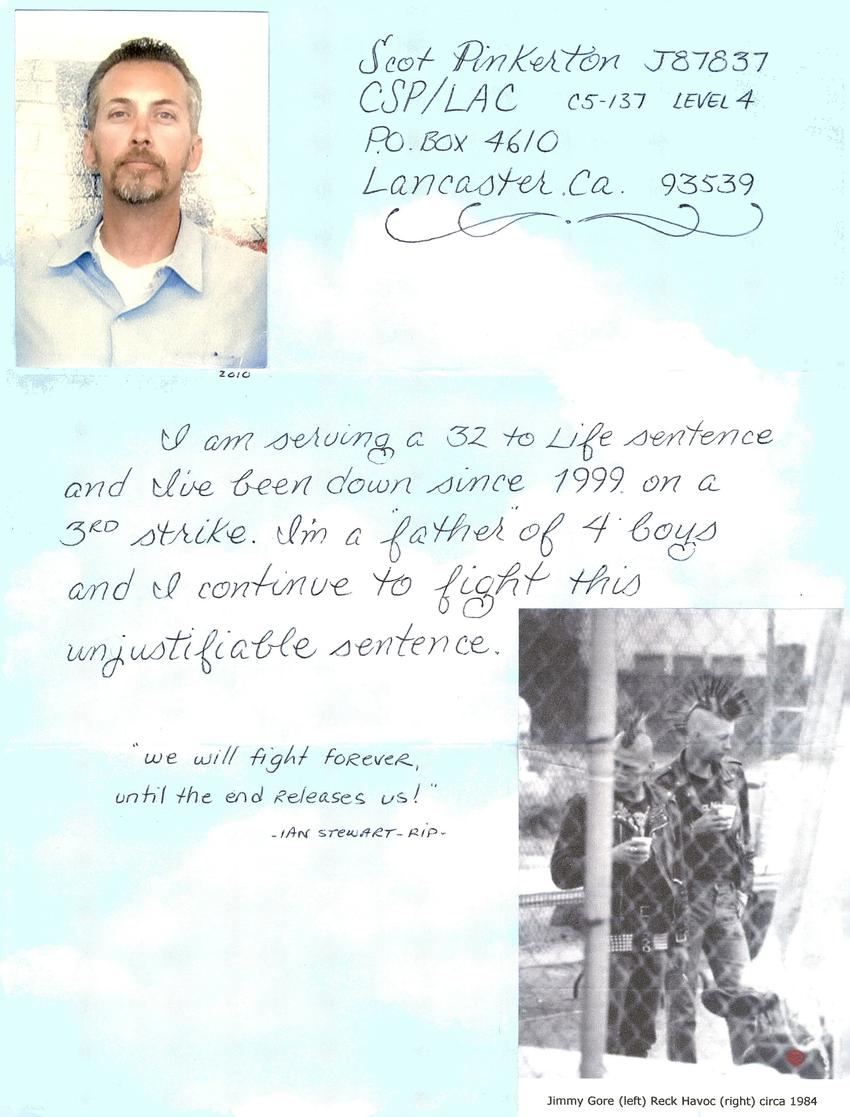 Justice is a Lie!

The 3 Strikes Law does not work! It may stop the individual victims of its law from committing anymore crimes on the streets, but the cost of the this Minority Report prevention is a bane on countless others. The vast majority of its victims were not on a rampage or a crime spree that were not going to stop short of murder by cop or the government locking them up and throwing away the key. Most made "mistakes" as youngsters and these "indiscretions" were later used against them to take their lives. Sometimes DECADES after the 1st "strikes".

There is NEVER any consideration given to how many other people are affected in virtually every three strikes sentence. What about the striker's family? Their children? Now they're fatherless children growing up, knowing that the government took their father away. And in nearly every case, a life sentence is NOT WARRANTED! There is NO JUSTIFICATION for taking a man or woman's life, short of them committing murder or some kind of sexual assault. I have no problem with getting rid of someone who victimizes children, especially since those kinds of people tend to NEVER stop their creep show. But taking a life for burglary? Or a simple assault? Or drugs? How would YOUR kids like it if it happened to you?

There's been some baby steps taken recently to correct this draconian assault on the American citizens, but just barely. It mostly affects those with very minor 3rd strikes: petty theft, possession, etc. They can still go back as far as it takes to find any felonies that can be called strikes. Mine were from 1985, 10 years before the 3 Strikes Law even came into existence!

I've heard of them going back to the 1950s to get a couple burglary strikes on old man, Tony M, striking him out when he was over 70 years old! He had committed no crimes since his teenage years in the '50s! That's what people in California voted for: someone's grandfather spending his last years in the California slave camps. But he's just one of thousands. I haven't seen him in over 10 years, but I hear he's still around now in his 80s. Most people wish for a long life. Do you think he does? Do you think I do?

It must be impossible for the apathetic California citizens to imagine the pathological hell, horror and torture that's being imprisoned indefinitely causes. The merciless suppression of human life has pushed countless 3 Strikes hostages to such states of hopelessness, desperation, and levels of frustration that suicide becomes a viable option. And why not? The government has basically declared us as enemies of the state and has sentenced us to death by incarceration.

So how long should someone who is "jailed to death" continue to be in collusion with their captors to keep this slave train rolling? Prisons are big business and it's the largest business in California. People are just commodities to this state. The more people in prison, the more money the state gets. Recently, California was ordered to bring the prison population down because it was over double the legal capacity. They've missed countless deadlines that the federal government has given them, and it's still way over maximum capacity. California makes too much money to want to let anyone go.

And the CCPOA? That's the prison guards union and is probably the most powerful union in California. They are busting their asses to keep EVERYONE in prison. The more people in prison, the safer their jobs are. Fuck us. Fuck our kids. As long as they are getting insanely overpaid as they are, they'd lock up every one of their friends and half their families! The VAST majority of the California prison budget goes towards their paychecks. It takes a certain sick kind of evil to raise their kids on this blood money earned from the misery of so many humans, from the crime victims to the 3 Strikes victims and their families.

The CDCR IS California. It's the heart of this police state. They have one singular, evil purpose: the imprisonment and enslavement of the "undesirables" for profit. The unholy alliance between the CCPOA and the state legislators want MORE PRISONS. More prisons, more profit.

Just a few years ago, there was a big scandal about the state taking money earmarked for seniors, the disabled, and for schools, reporting it to the prison complexes. Has everyone forgot about that? Of course they have. Those poor prison guards need bigger paychecks, and these old people are about to die anyway.

They use a handful of truly bad criminals, usually sexual predators, to shut all the California prisoners up. This political strategy is obvious and has sinister implications. The more they can falsely portray the California prisoners as psychotics, sociopaths, and dangerous predators, the easier to justify paying these security guards so much damn money! After all, they're walking the "toughest beat in the state." Just try telling that to the REAL police.

I'm not going to deny that the guards in California's Level 4 prisons have a dangerous job, but violence towards guards is relatively rare and almost always elicited by their treatment of the offending prisoner (not in every case...). Like the rest of the world, sometimes you're in the wrong place at the wrong time. The state's false claim that the average California 3 Strikes prisoner is a bloodthirsty gangbanger that will rape, rob, and kill if they are ever let out is nothing short of political deceit used to secure the fear vote from the average uninformed taxpayer. How do you think they managed to justify the unwarranted expenditure of tax dollars for the prison guards' 37% pay raise between 2001 and 2006?

Thousands of so-called "American citizens" will continue to be railroaded off to spend the remainder of their lives bouncing endlessly between physical and emotional exile. In the monotonous routine of prison life and the occasional fight for your life, this mass incarceration is a crime of social genocide that creates generations of fatherless children. But hey, having a father in their lives isn't really important, is it?

They should tell you want the government feels about its citizens: fuck your kids! There's money to be made!

The moral and ethical implications will forever haunt the consciences of all whom wrongly voted the 3 Strikes Law into effect. At least, I hope so. This law is an attack on the people of California disguised as a law to save them. All in the name of money. It's an act of treason waged against society's least able to defend themselves from it. Class war. Which way did you vote? Is there blood on your hands? Are you one of the people who voted to keep my sons fatherless?

Eventually, most 3 Strikers will get gout. Most of them are mad as HELL! What's going to happen then?

*"Your authority and your power has turned us sick and sour. And your justice is a lie! And we're gonna fight it 'till you die!"
MDC

I am serving a 32 to life sentence, and I've been down since 1999 on a 3rd Strike. I'm a father of four boys, and I continue to fight this unjustifiable sentence.

"We will fight forever until the end releases us!"
-Ian Stewart
RIP