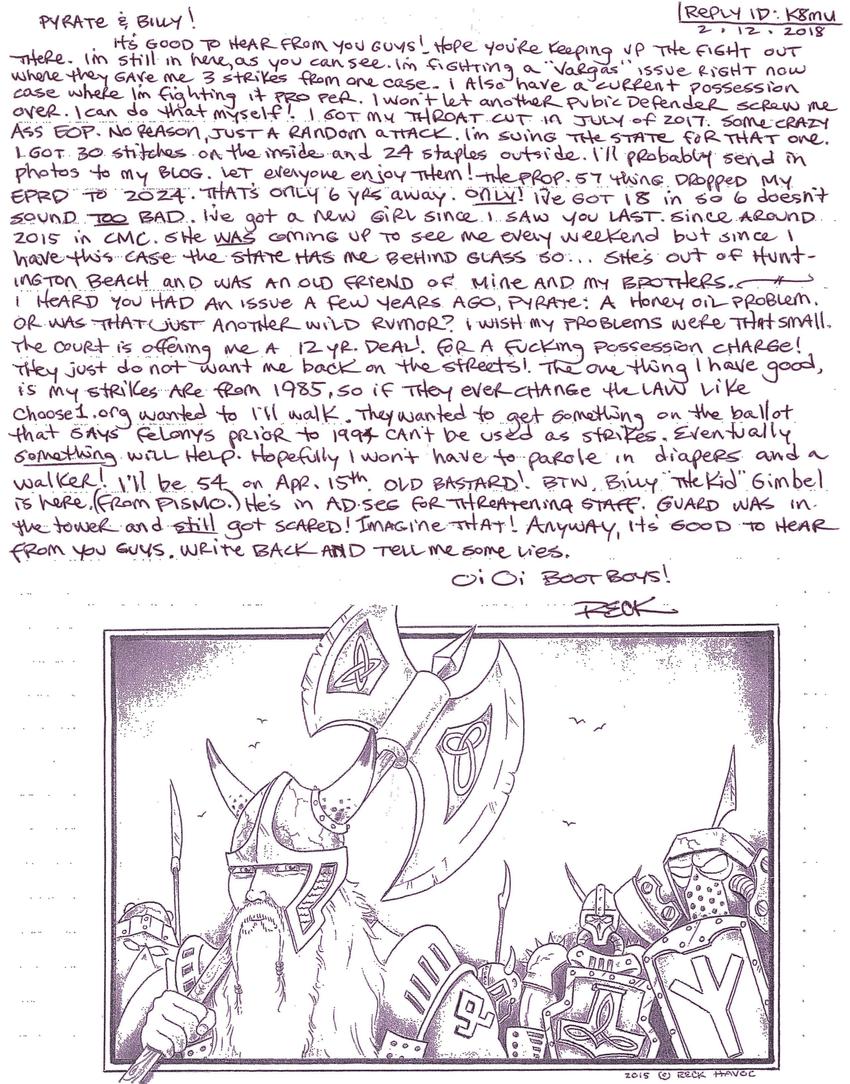 It's good to hear from you guys! Hope you're keeping up the fight out there. I'm still in here, as you can see. I'm fighting a "Vargas" issue right now where they gave me 3 strikes from one case. I also have a current possession case where I'm fighting it pro per. I won't let another public defender screw me over. I can do that myself! I got my throat cut in July of 2017. Some crazy ass EOP. No reason, just a random attack. I'm suing the state for that one. I got 30 stitches on the inside and 24 staples outside. I'll probably send in photos to my blog. Let everyone enjoy them! The prop 57 thing dropped my EPRD to 2024. That's only 6 years away. Only! I've got 18 in so 6 doesn't sound too bad. I've got a new girl since I saw you last. Since around 2015 in CMC. She was coming up to see me every weekend but since I have this case the state has me behind glass so... She's out of Huntington Beach and was an old friend of mine and my brother's.

I heard you had an issue a few years ago, Pyrate: A honey oil problem or was that just another wild rumor? I wish my problems were that small. The court is offering me a 12 year deal! For a fucking possession charge! They just don't want me back on the streets! The one thing I have good, is my strikes are from 1985, so if they ever change the law like Choose1.org wanted to I'll walk. They wanted to get something on the ballot that says felonies prior to 1994 can't be used as strikes. Eventually something will help. Hopefully I won't have to parole in diapers and a walker! I'll be 54 on April 15th. Old bastard! BTW, Billy "The Kid" Gimble is here. (From PISMO) He's in ADSEG for threatening staff. Guard was in the tower and still got scared! Imagine that! Anyway, It's good to hear from you guys. Write back and tell me some lies.

Hi Reck. The reason I can't take calls anymore is I don't have a landline anymore. I'm in a 2 year contract I want out of. I see you can do a video chat. Know anything about that? Would be good to see you after all these years. I was in Riverside a couple days during the fall tour, not able to go anywhere. Wanted to see you, Lyvonne and Sep. Maybe next time. Was an unexpected trip. At least we have the paperwork in order.

Same old shit over here. My book is back in print and I'm working on the next one, and a story for Modern Drunkard Magazine. It's called Thirty Beers Missing. We lost a 30 pack one day on tour. This lame fuck said we didn't have room for it because he had to have his free water in it's spot. That in addition to his mobile kitchen and groceries and the biggest suitcase there is for his souvenirs. What a bitch!?!

Guess I'm on a roll so I should get to work on your next letter.