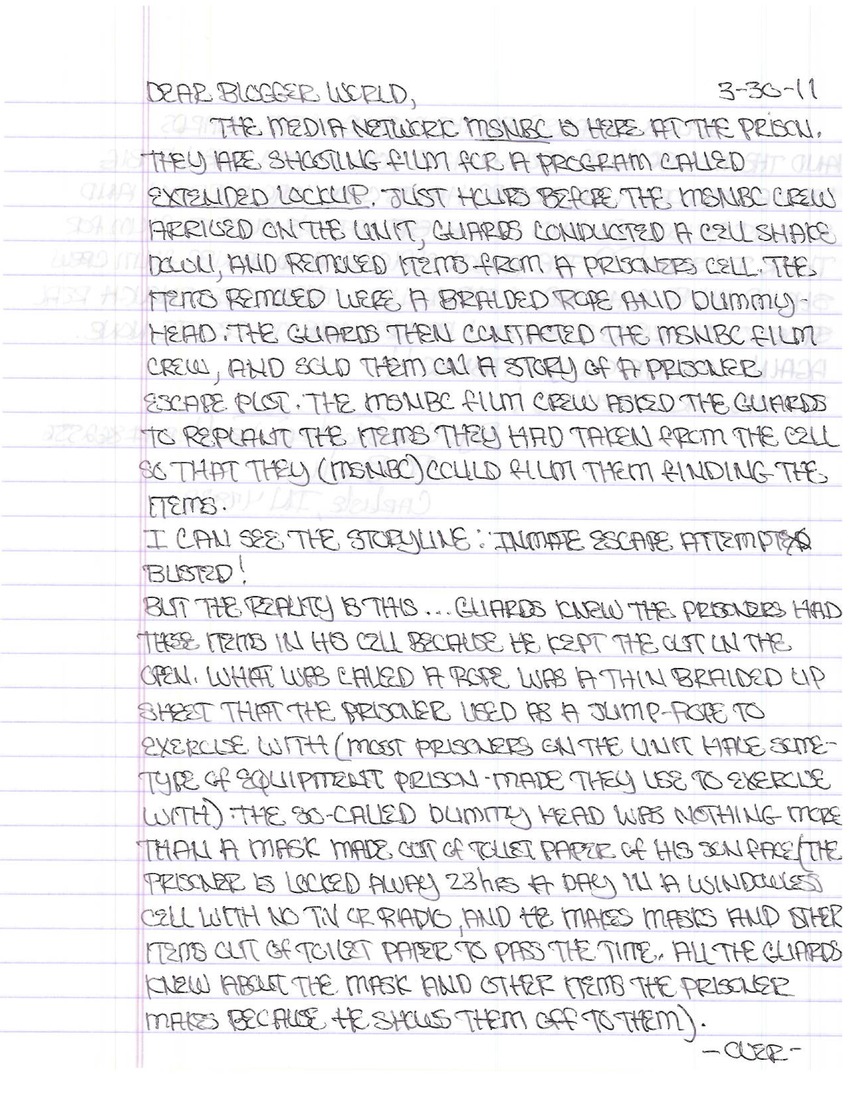 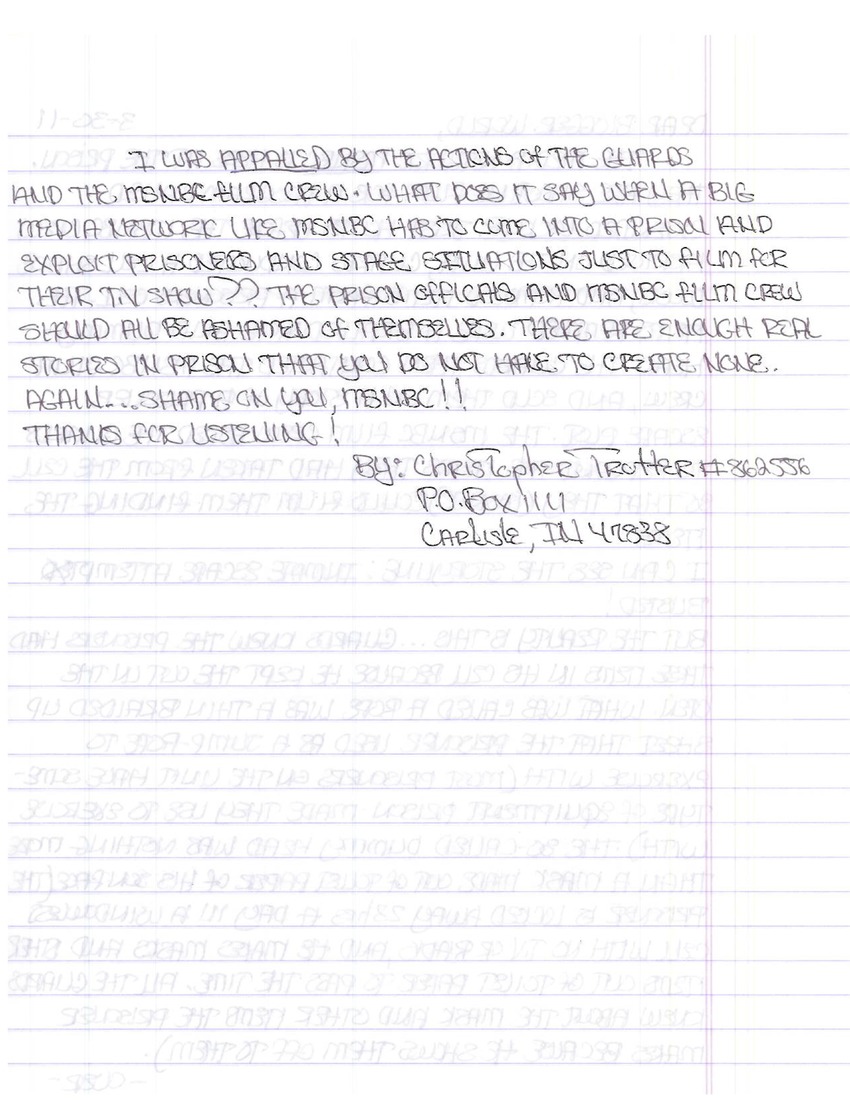 Dear Blogger World,
The Media Network MNNBC is here at the prison. They are shooting film for a program called "Extended Lockup." Just hours before the MSNBC Crew arrived on the unit, guards conducted a cell shake down, and removed items from a prisoners cell. The items removed were a braided rope and dummy head. The guards then contacted the MSNBC film crew, and sold them on a story of a prisoner excape plot. The MSNBC film crew asked the guards to replant the items they had taken from the cell so that they (MSNBC) could film them finding the items.

I can see the storyline: inmate excape attempt busted!

But the reality is this... Guards knew the prisoner had these items in his cell because he kept them out in the open. What was called a rope was a thin braided up sheet that the prisoner used as a jump-rope to exercise with (most prisoners on the unit have some type of equipment prison-made they us to exercise with). The so-called dumy head was nothing more than a mask made out of toilet paper of his son's face. The prisoner is locked away 23 hours a day in a windowless cell with no TV or radio, and he makes masks and other items out of toilet paper to pass the time. All the guards knew about the mask and other items the prisoner makes because he shows them off to them).

I was appauled by the actions of the guards and the MSNBC film crew. What does it say when a big media network like MSNBC has to come into a prison and exploit prisoners and stage situations just to film for their Tv show. The prison officials and MSNBC film crew should all be ashamed of themselves. There are enough real stories in prison that you do not have to create none. Again...SHAME ON YOU MSNBC!!!
Thanks for listening!

Wow this is so crazy that show is why I just googled u an came across this site haha so funny but the way they showed tha story u could tell there was sumthing fishy bout tha whole thing but thats for a little insite into ur limited world thanx much
Amanda weaver
dats wats up i'm watching it now its krazy u went in for 4 years an got 142 years man
I am watching the show now and that is also why I googled you and looked you up. I am not quite sure what it is about you that I would like to get to know....

Coni
Wow so funny was watching show and was something about you that made me want to know more . Thanks for the insight about msnbc I'm sure not many know that little tidbit. Well show just ended and I see you were granted access back to general POP , I hope you maintain well there and stay out of trouble godbless to you. Tori
Internet is a wonderful invention. I was watching the episode and became interested in your story since I turned on late. Glad you made it back to general pop. Thanks for exposing the truth. It was intriguing to read your thoughts in your own words.
hi my name is tristan garwood i dont have much to say but i figured my name and best wishes would maybe make you feel like some people do care keep on with the strong mind
Mr. Trotter.

You have the strongest mind/constitution of any person of which I am aware. I have never been incarcerated nor do I plan to be incarcerated. The strength that you displayed during your time in the hole is something I envy. Plus, getting your hair cut was a good idea. It looks more inviting and up-to-date. Thank you.
You are a criminal. Boo hoo you weren't treated right. Shall I say it again? Boo "I don't care" hoo
@ Mikbrigabjas: Of course you care you ape - if not you wouldn't be surfing these sights to spread your ignorance and hate. GO AWAY - insert suitable four letter words.
@Mikbrigabjas, I agree with axel, seriously you obviously are very interested to take your time to be on this site. I do believe that we all make mistakes. does not mean we should be treated like an animal.... As for Mr. Trotter that I believe has got a raw deal with all the time, You keep holding your head high and stay stong... you have all my support
(scanned reply – view as blog post)
uploaded Jan. 24, 2012.  Original (PDF) 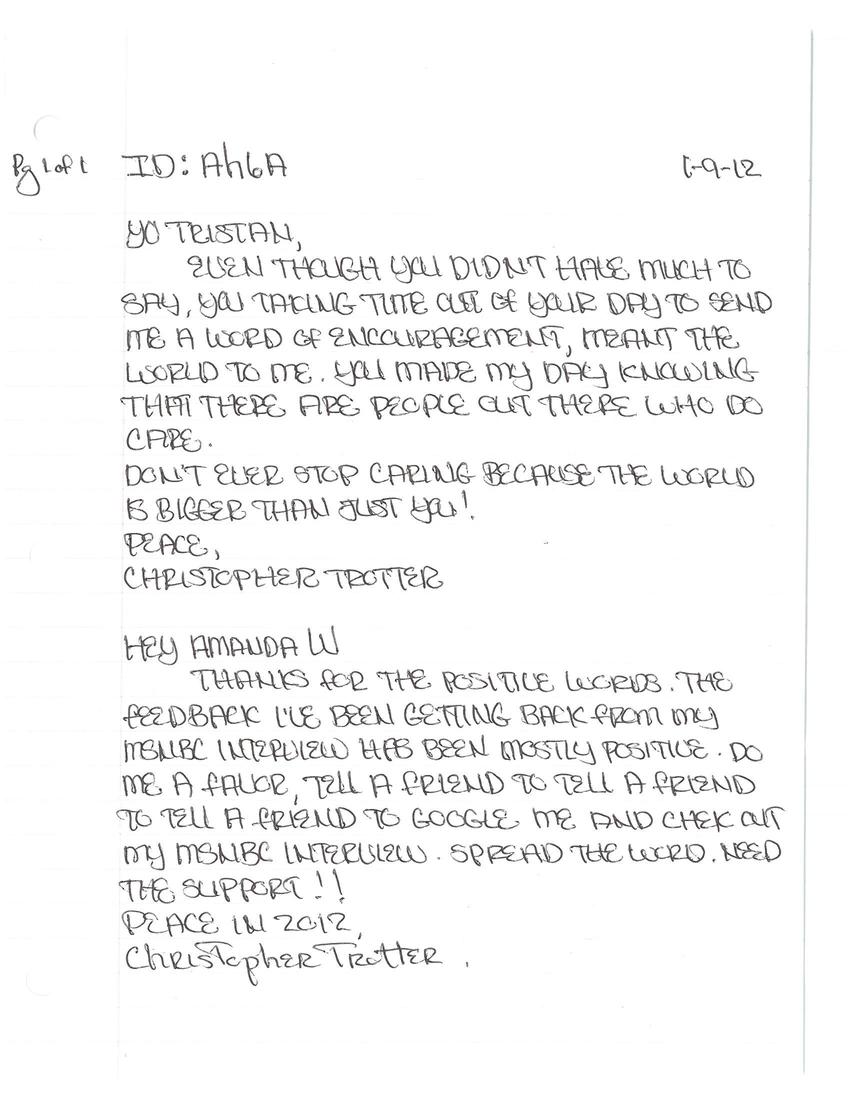 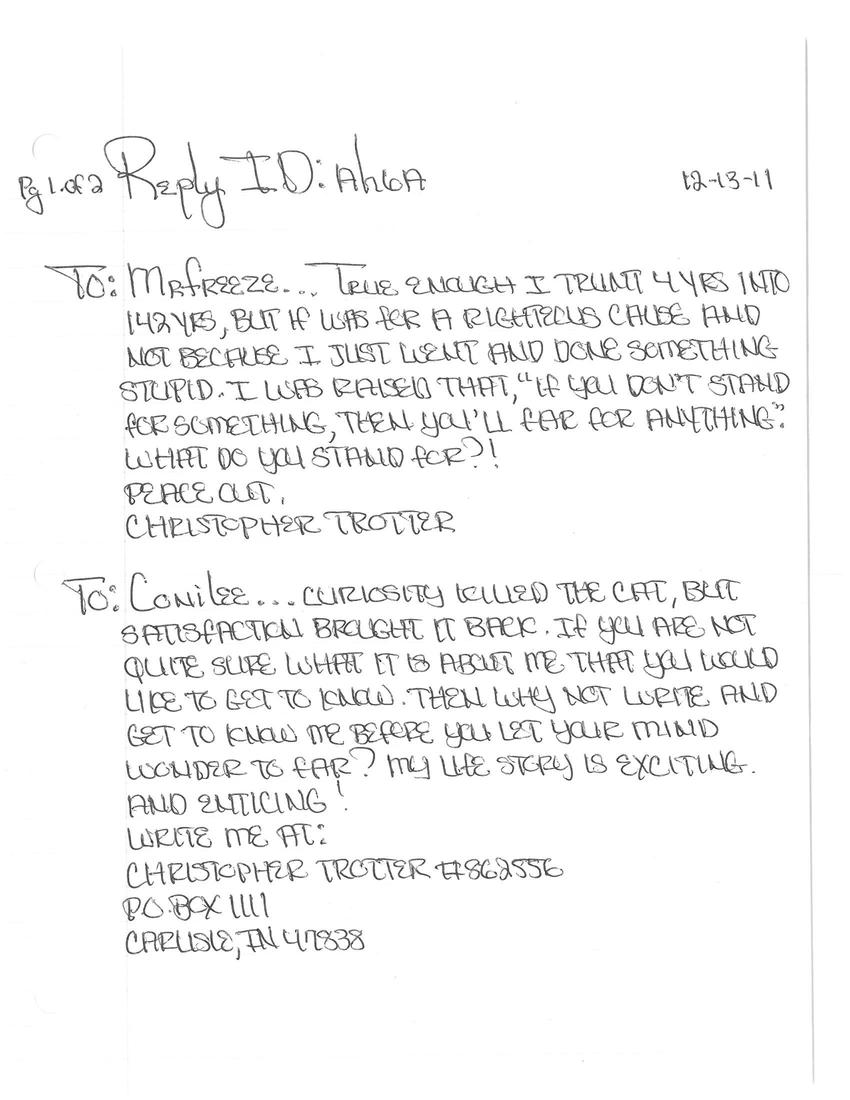 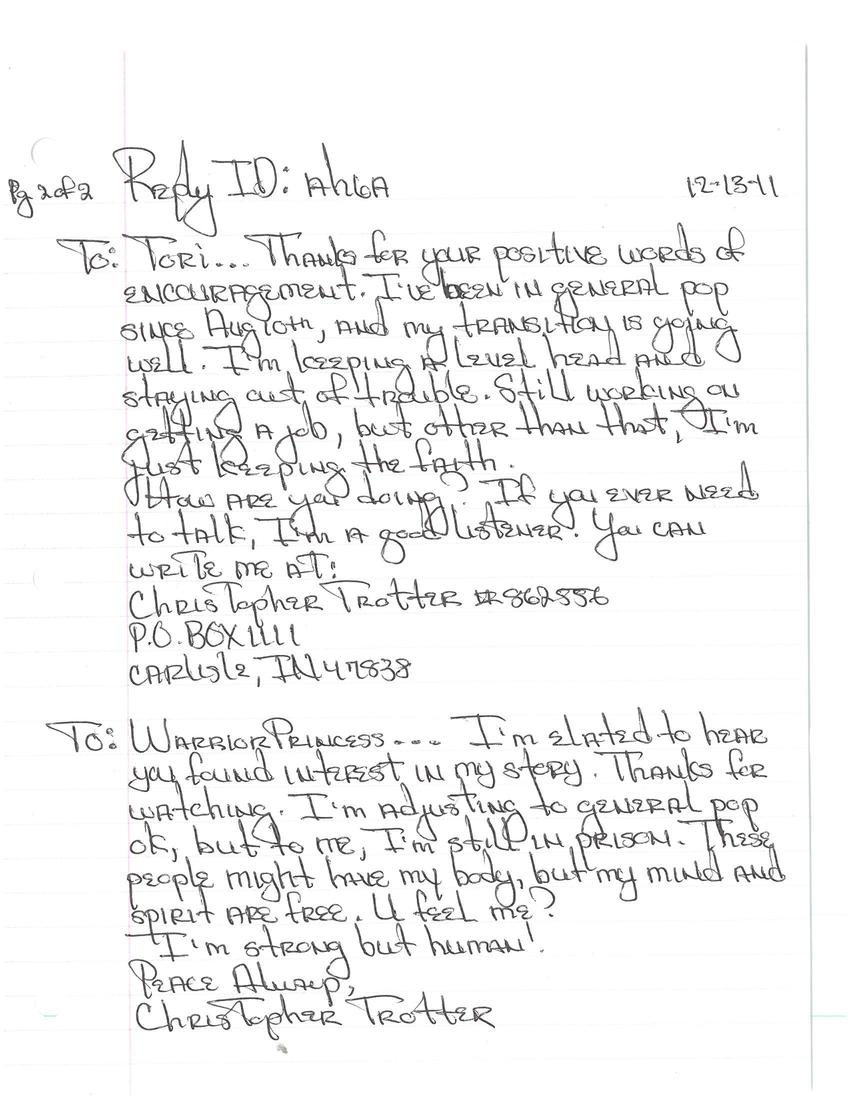 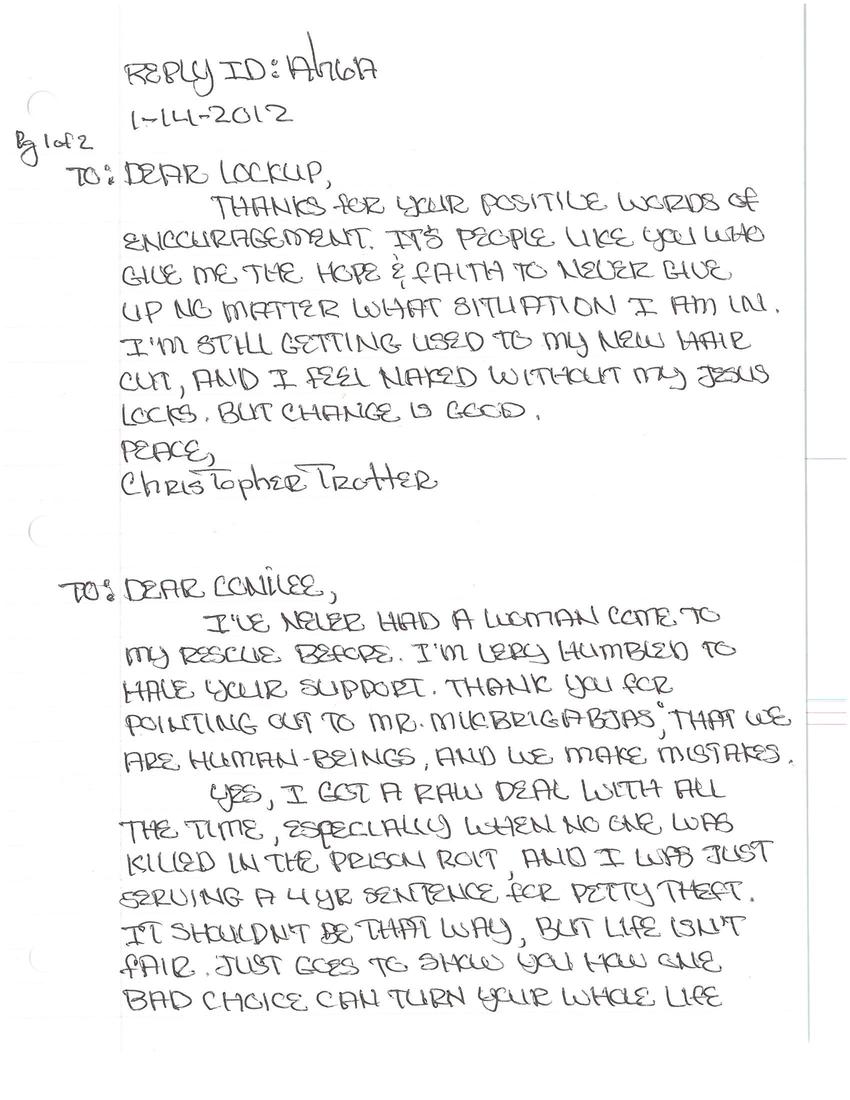 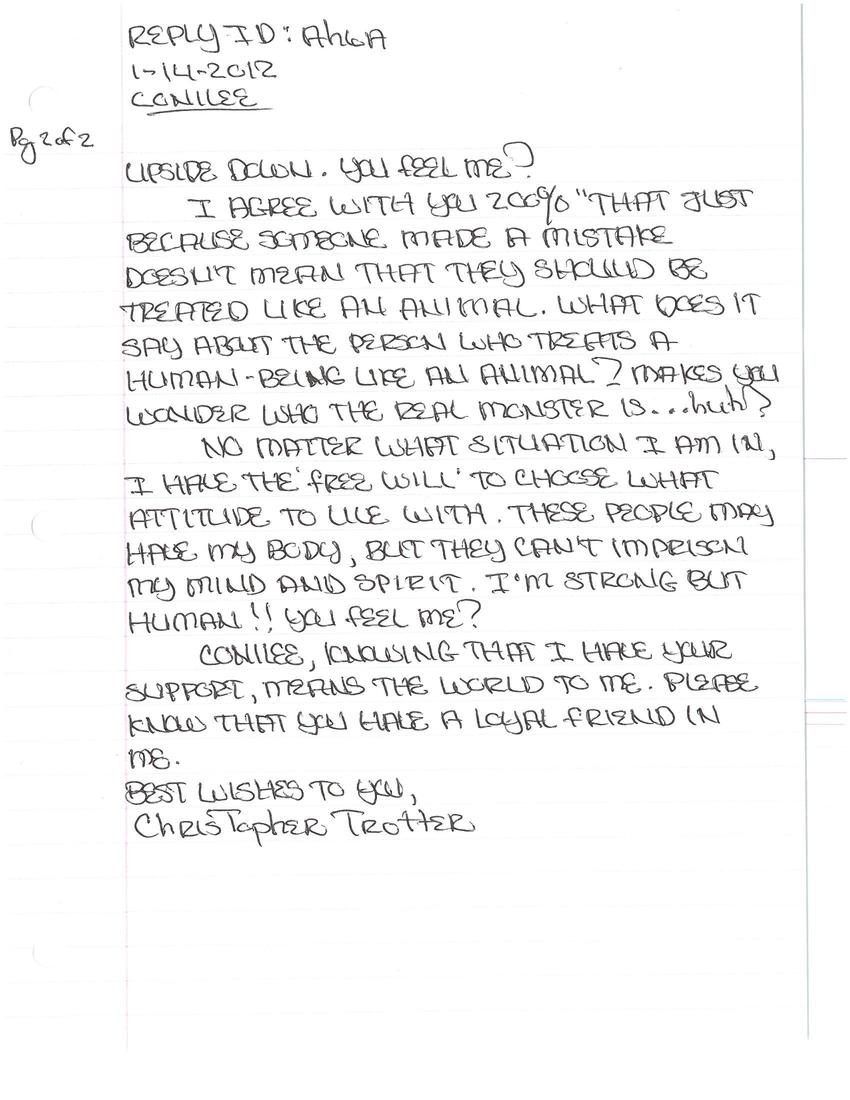 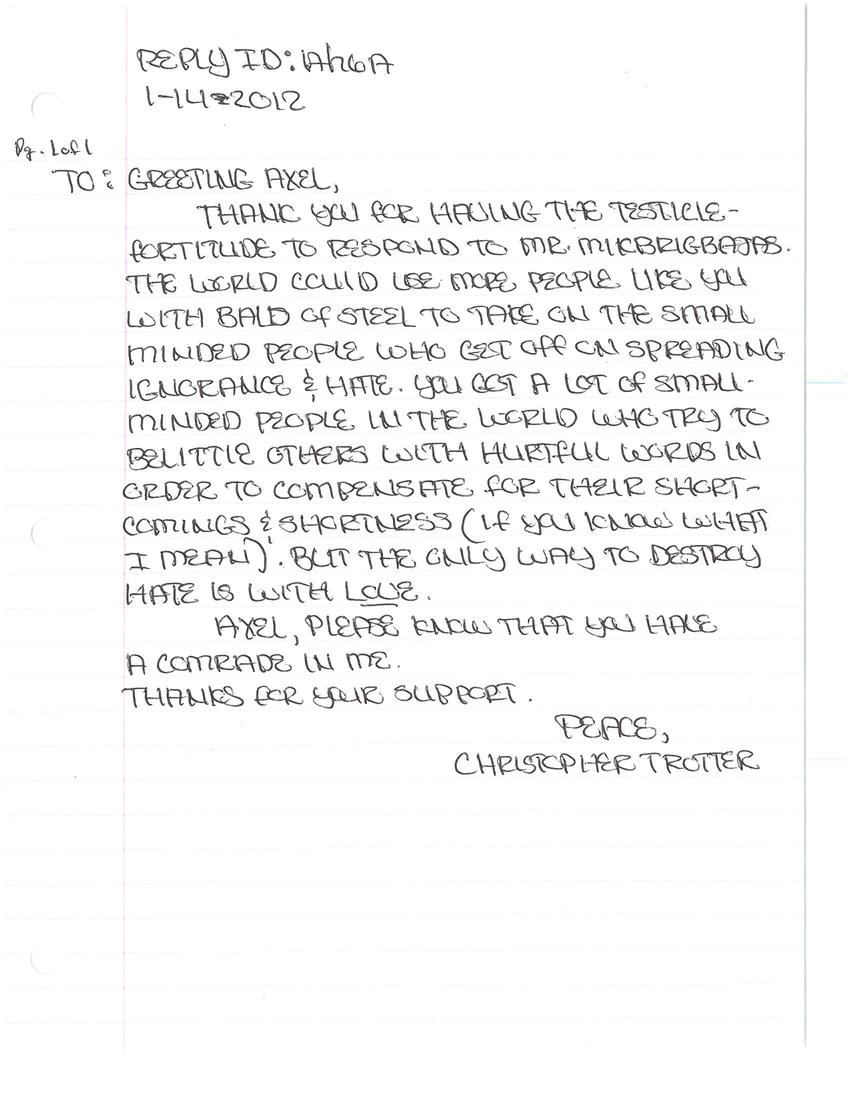 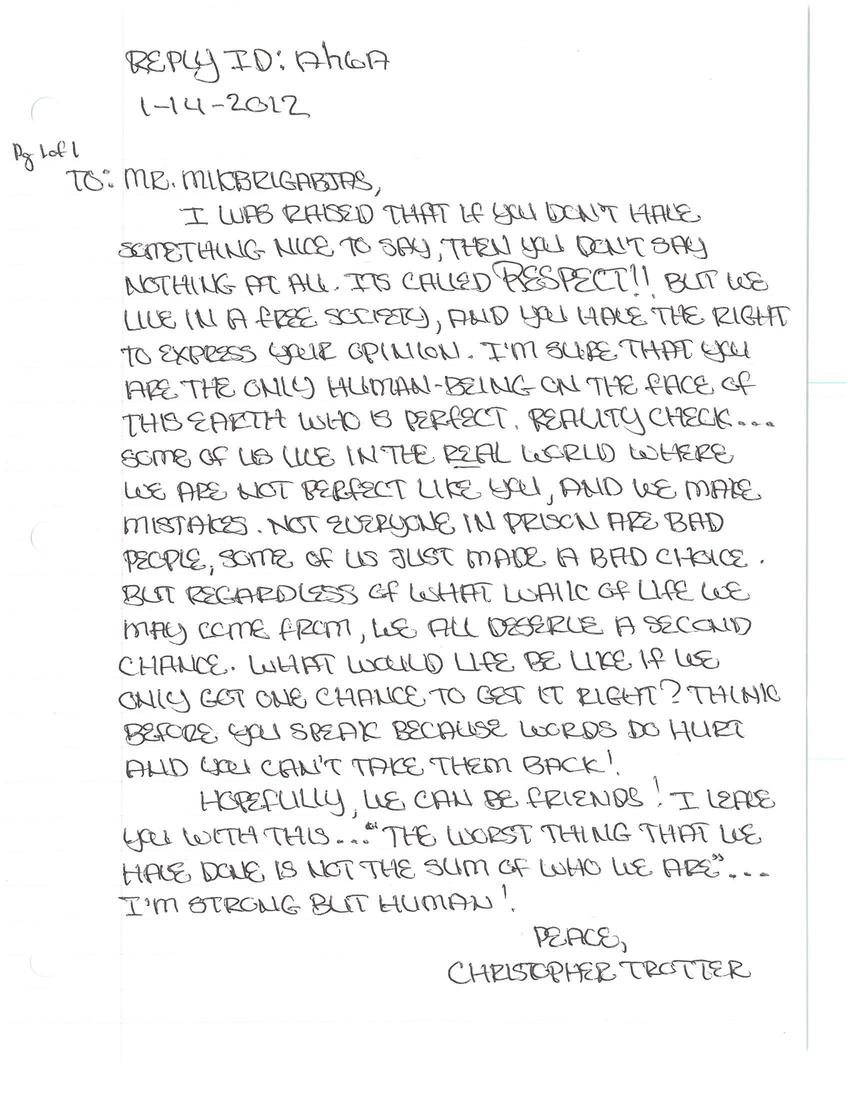 Wow, after all these years you crossed my mind and I wondered how you were doing. Of course with today's technology, I Googled you. I thought you would be out of prison by now, never knew you were serving a 142 year term. Surprise to you too. You are still the strong BLACK man you were then, to which I say stay true my brother. Continue to take care of yourself, and happy belated Soul-Day. 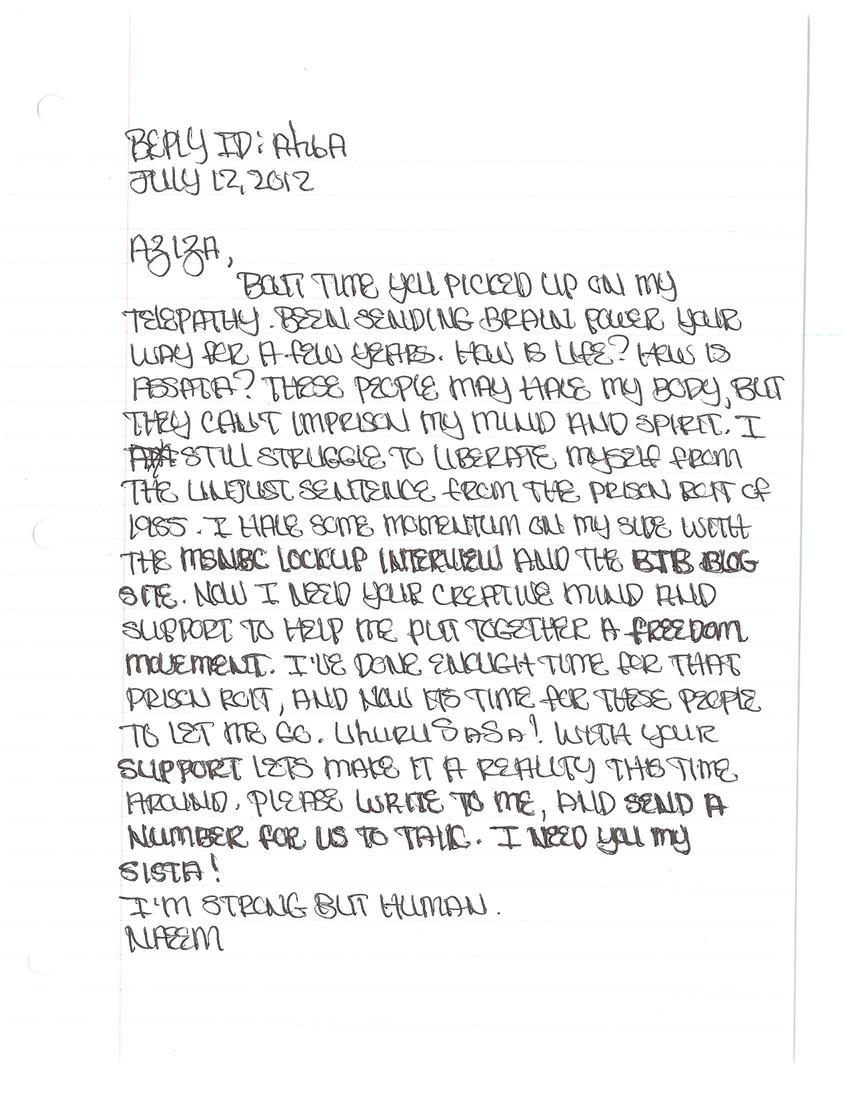 Mr. Trotter, how are you doing? i hope your still holding strong in your situation! i wrote you on here bout 8 months ago when i watched that msnbc show well i see the rerun and been wondering bout ya i also saw were u cut ur hair off i know it was a good piece of freedom for you it aint the freedom you should have from that rathole (sorry i call all jails that) you are in yes i do think you shoulda been outta there its bullshit and yes i dont know all the details in the story but nobody should have to do that much time in any rathole its crual but i was just wanting to touch base wit you again i be thinking bout how u r ur stuck in the back of my brain and u pop out every now and again but hope ur as gud as u can b keep ur head high and ur middle finger higher and smile in they face no matter how hard they hate that shit but much luv i will b hittin u up again in the future
thank u much, Amanda Weaver
Hi Christopher,
How are you doing? I have wrote directly to you only to recieve it back. Can u please send me your info again. I am so sad by your situation and I want to be there for you in way possible, Ill do what I can write who I can get a petition up whatever.. Lets get you out of there.... I love and admire your strength. You stay strong and Hope to one day to get to really know you.
thinking about you and praying for you.....