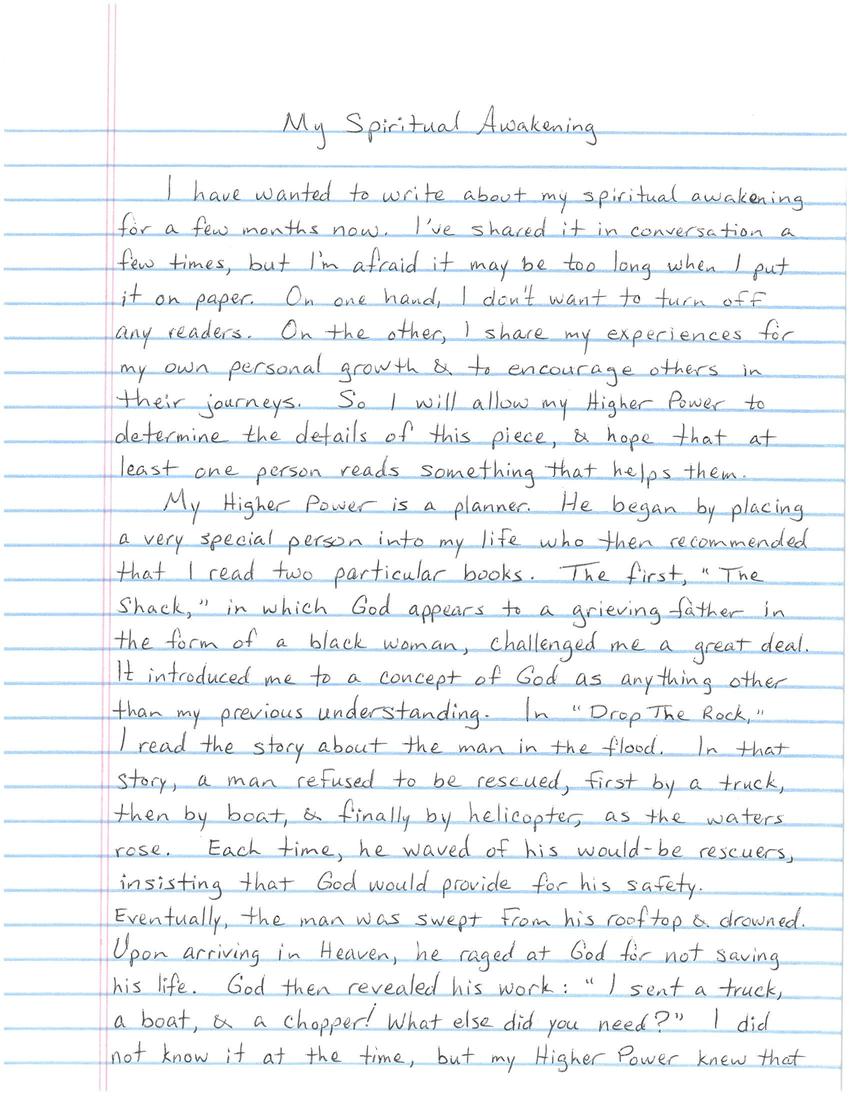 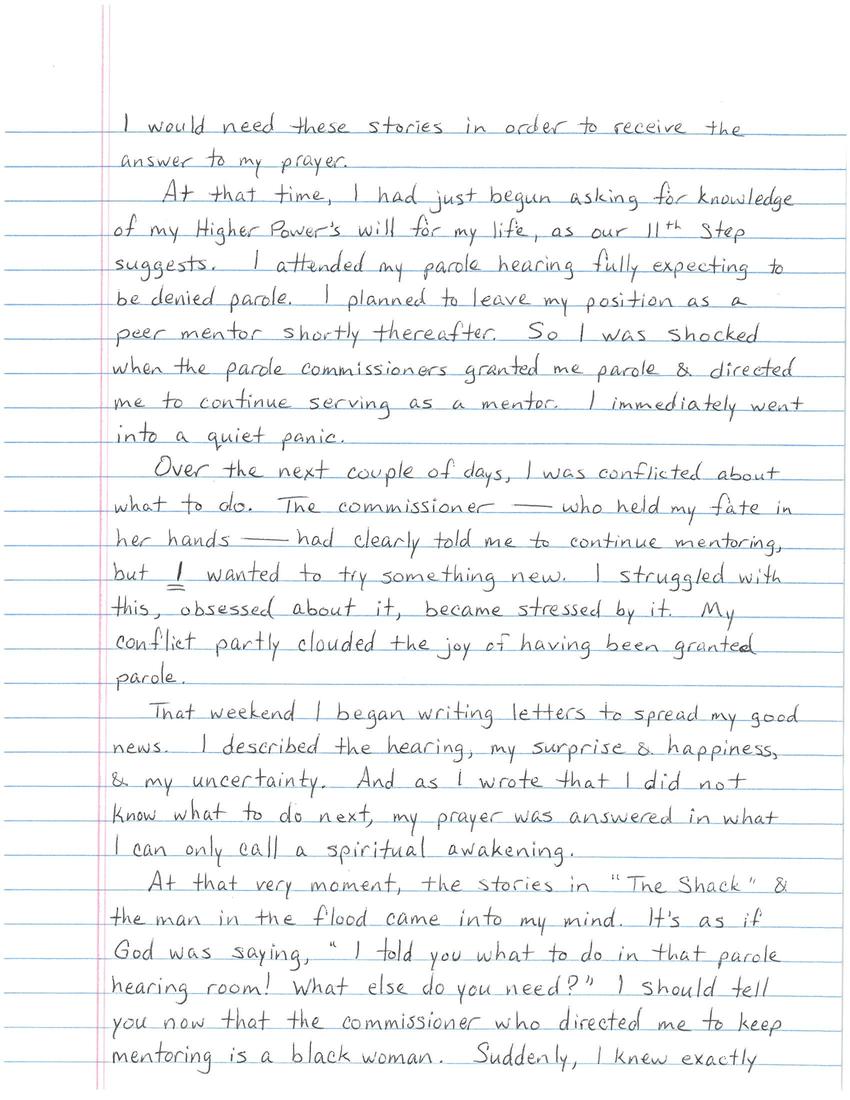 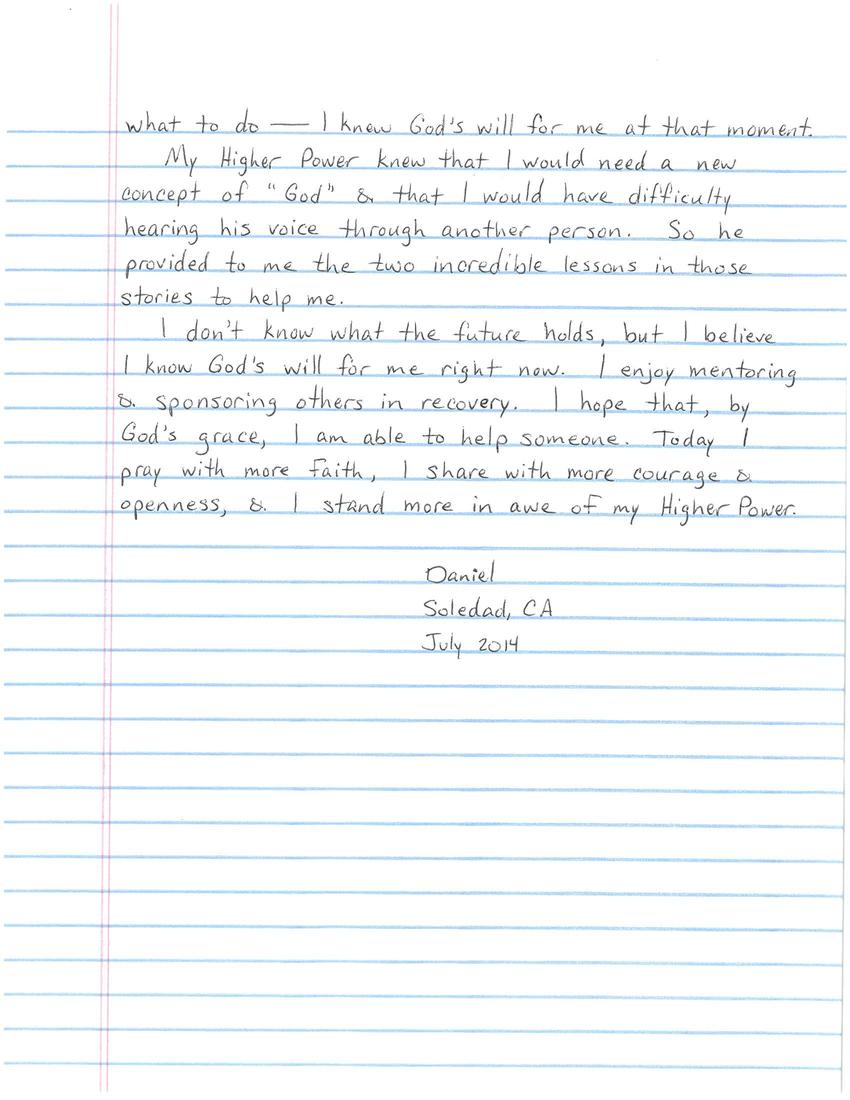 I have wanted to write about my spiritual awakening for a few months now. I've shared it in conversation a few times, but I'm afraid it may be too long when I put it on paper. On one hand, I don't want to turn off any readers. On the other, I share my experiences for my own personal growth & to encourage others in their journeys. So I will allow my Higher Power to determine the details of this piece, & hope that at least one person reads something that helps them.

My Higher Power is a planner. He began by placing a very special person into my life who then recommended that I read two particular books. The first, "The Shack," in which God appears to a grieving father in the form of a black woman, challenged me a great deal. It introduced me to a concept of God as anything other than my previous understanding. In "Drop The Rock," I read the story about the man in the flood. In that story, a man refused to be rescued, first by a truck, then by a boat, & finally by a helicopter, as the waters rose. Each time, he waved off his would-be rescuers, insisting that God would provide for his safety. Eventually, the man was swept from his rooftop & drowned. Upon arriving in Heaven, he raged at God for not saving his life. God then revealed his work: "I sent a truck, a boat, & a chopper! What else did you need?" I did not know it at the time, but my Higher Power knew that I would need these stories in order to receive the answer to my prayer.

At that time, I had just begun asking for knowledge of my Higher Power's will for my life, as our 11th Step suggests. I attended my parole hearing fully expecting to be denied parole. I planned to leave my position as a peer mentor shortly thereafter. So I was shocked when the parole commissioners granted me parole & directed me to continue serving as a mentor. I immediately went into a quiet panic.

Over the next couple of days, I was conflicted about what to do. The commissioner - who held my fate in her hands - had clearly told me to continue mentoring, but I wanted to try something new. I struggled with this, obsessed about it, became stressed by it. My conflict partly clouded the joy of having been granted parole.

That weekend I began writing letters to spread my good news. I described the hearing, my surprise & happiness, & my uncertainty. And as I wrote that I did not know what to do next, my prayer was answered in what I can only call a spiritual awakening.

At that very moment, the stories in "The Shack" & the man in the flood came into my mind. It's as if God was saying "I told you what to do in that parole hearing room! What else do you need?" I should tell you now that the commissioner who directed me to keep mentoring is a black woman. Suddenly, I knew exactly what to do - I knew God's will for me at that moment.

My Higher Power knew that I would need a new concept of "God" & that I would have difficulty hearing his voice through another person. So he provided me with incredible lessons in those stories to help me.

I don't know what the future holds, but I believe I know God's will for me right now. I enjoy mentoring & sponsoring others in recovery. I hope that, by God's grace, I am able to help someone. Today, I pray with more faith, I share with more courage & openness, & I stand more in awe of my Higher Power.

Thank you for sharing this. It reminds me to continue to pray for knowledge of my Higher Power's will for me.
Hi Daniel, Happened across your posts and liked them. Would like to help you help others. Need some help with projects to help others. How can I contact you?
Best, Joe R.
Hello Daniel,
I read your profile and it is very touching. Thank you Daniel for sharing your growth. You write well and appreciate you sharing.