To Elected Representatives and U.S. Citizens 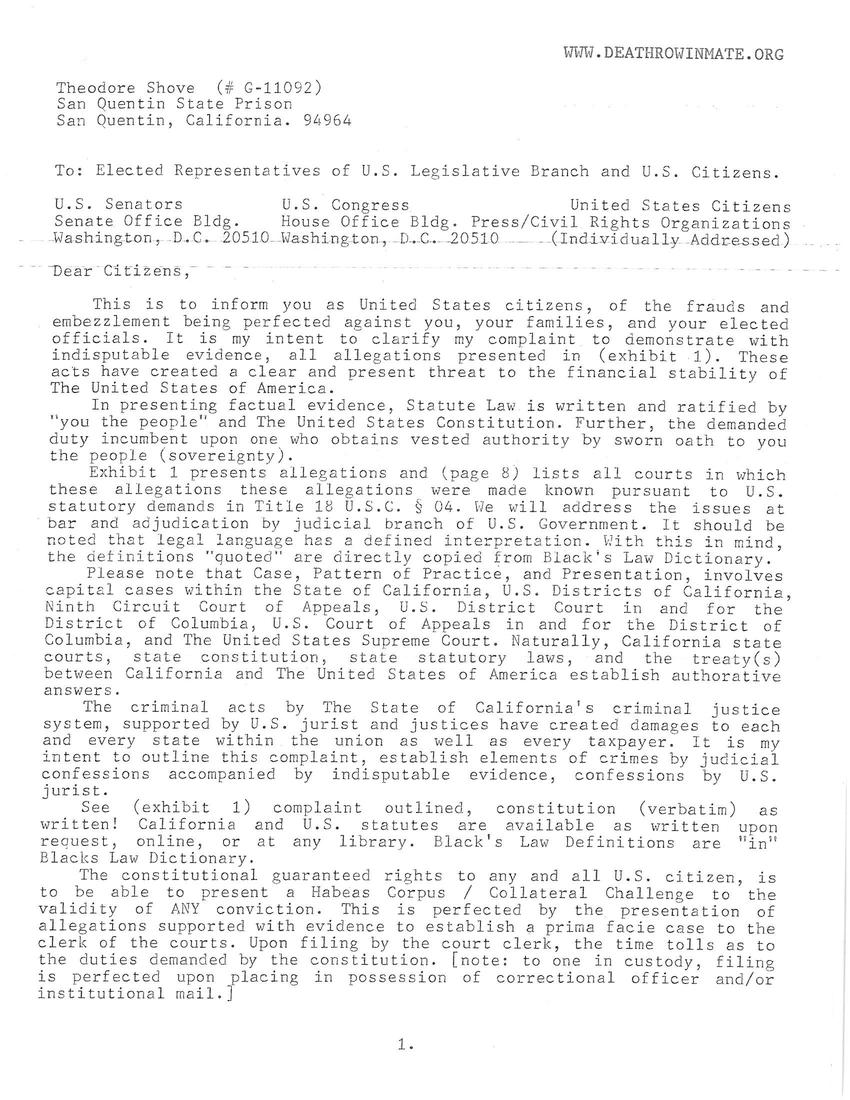 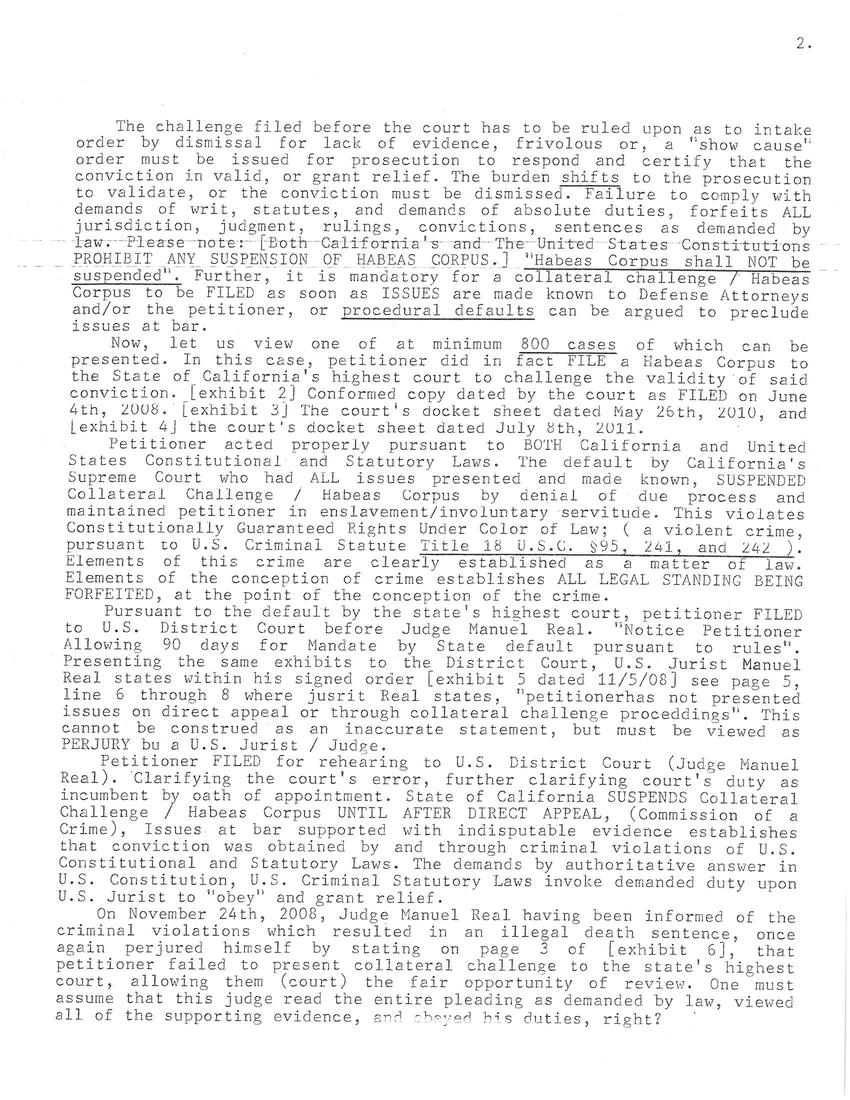 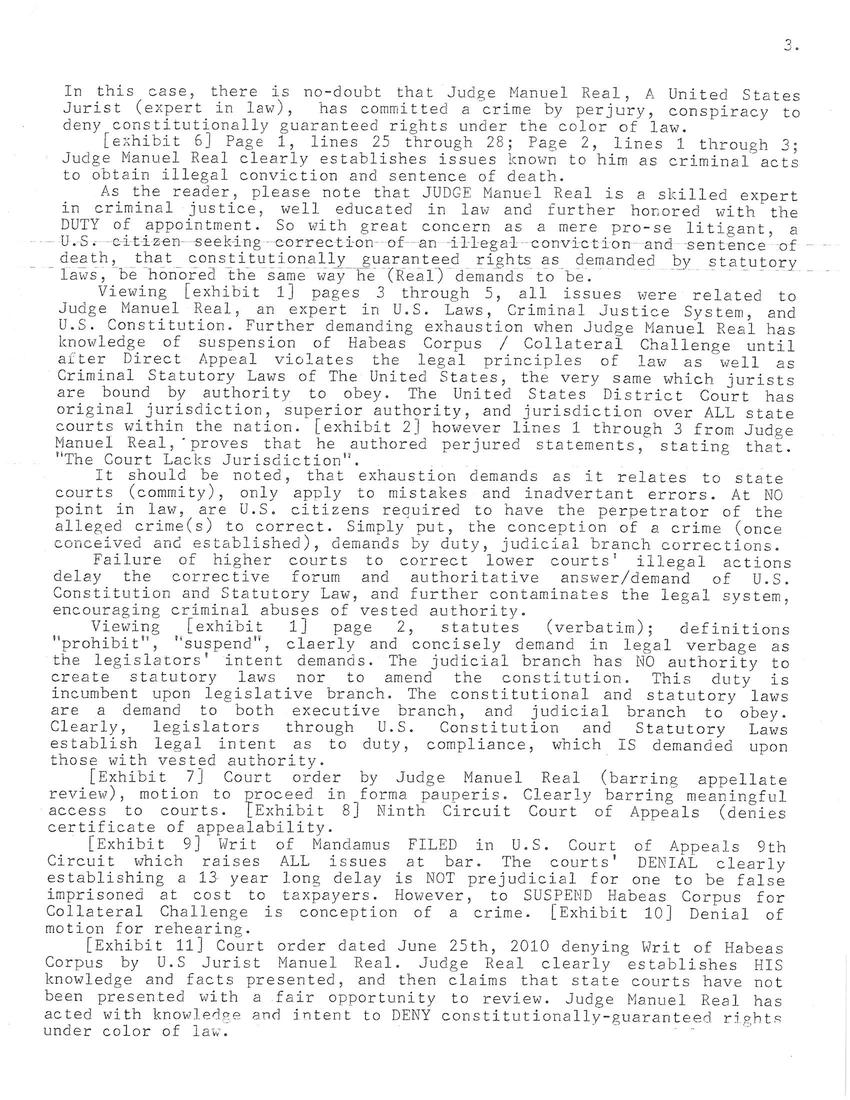 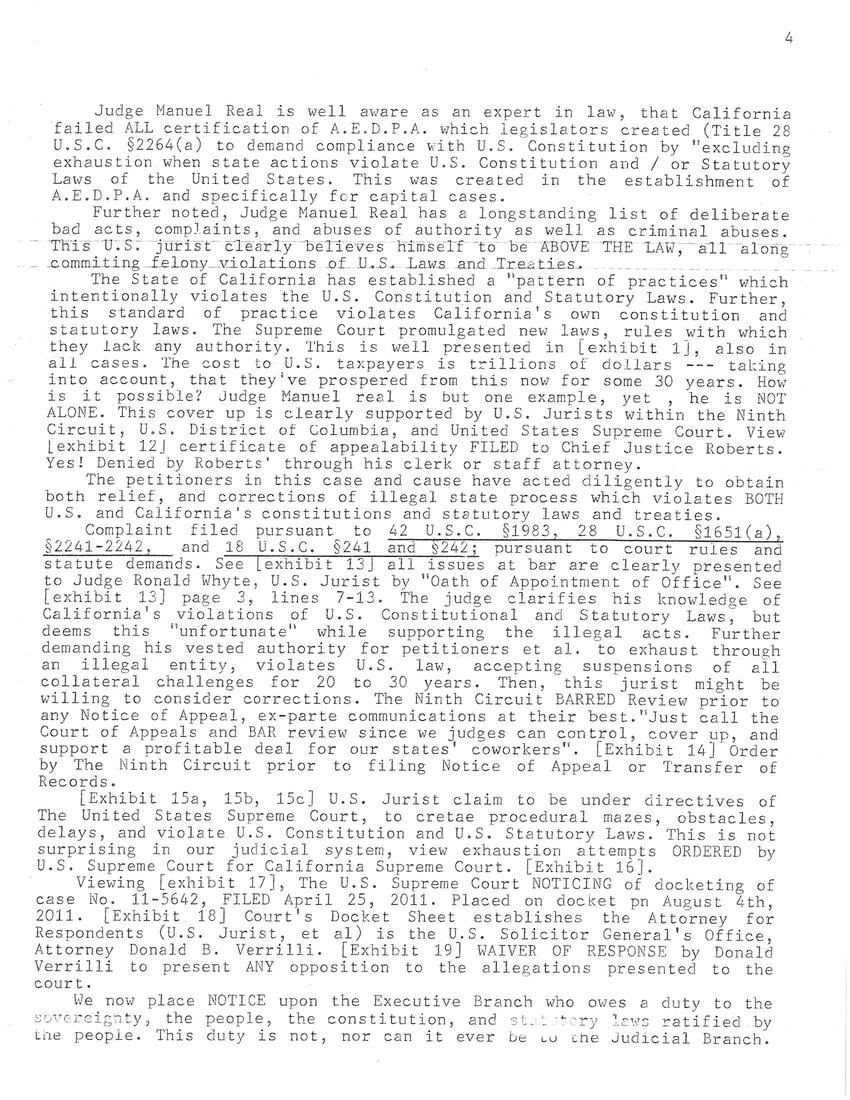 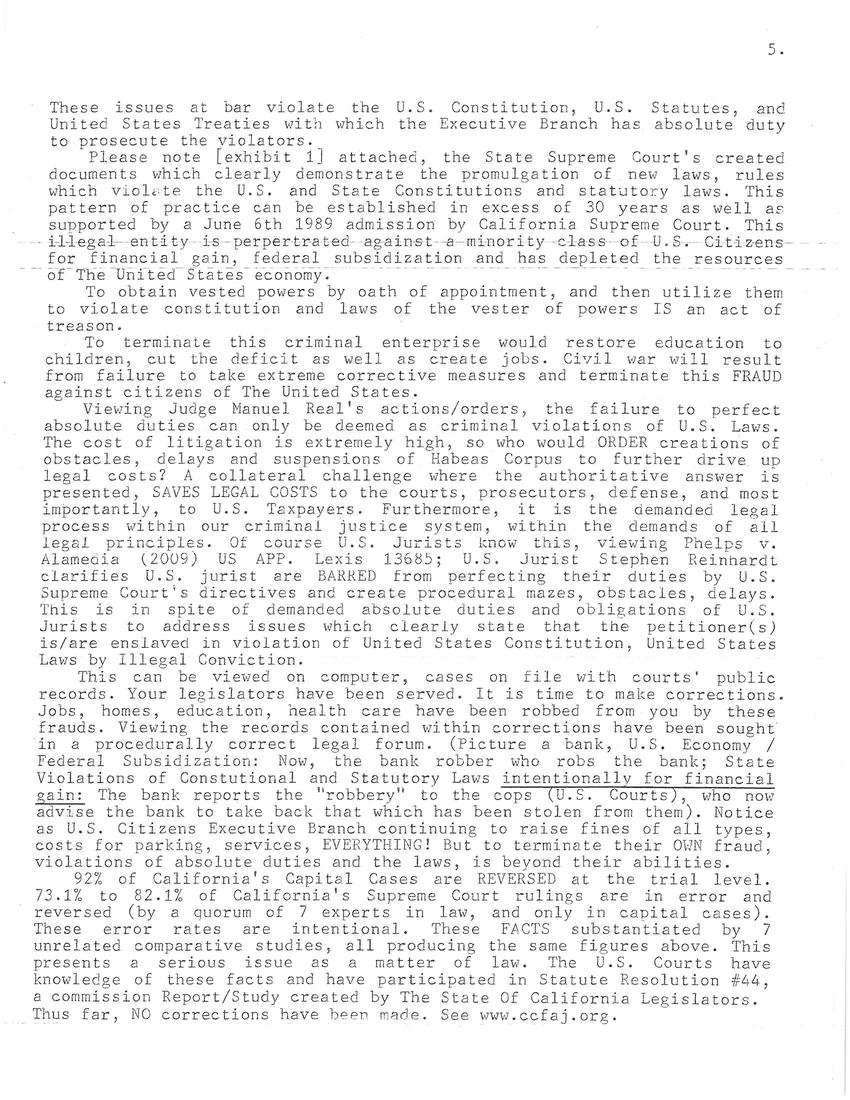 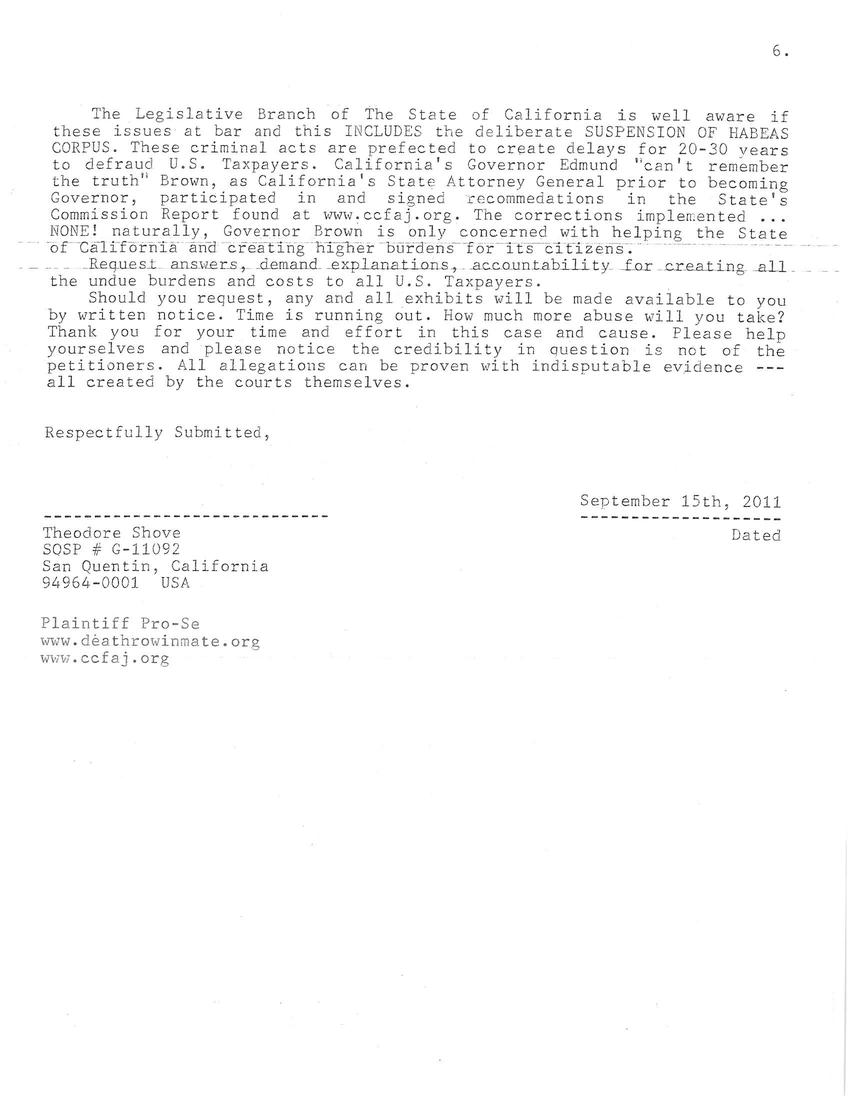 To: Elected Representatives of U.S. Legislative Branch and U.S. Citizens.

This is to inform you as United States citizens, of the frauds and embezzlement being perfected against you, your families, and your elected officials. It is my intent to clarify my complaint to demonstrate with indisputable evidence, all allegations presented in (exhibit 1). These acts have created a clear and present threat to the financial stability of The United States of America.
In presenting factual evidence, Statute Law is written and ratified by "you the people" and The United States Constitution. Further, the demanded duty incumbent upon one who obtains vested authority by sworn oath to you the people (sovereignty).
Exhibit 1 presents allegations and (page 8) lists all courts in which these allegations these allegations were made known pursuant to U.S. statutory demands in Title 18 U.S.C. [symbol] 04. We will address the issues at bar and adjudication by judicial branch of U.S. Government. It should be noted that legal language has a defined interpretation. With this in mind, the definitions "quoted" are directly copied from Black's Law Dictionary.
Please note the Case, Pattern of Practice, and Presentation, involves capital cases within the State of California, U.S. Districts of California, Ninth Circuit Court of Appeals, U.S. District Court in and for the District of Columbia, U.S Court of Appeals in and for the District of Columbia, and The United States Supreme Court. Naturally, California state courts, state constitution, state statutory laws, and the treaty(s) between California and The United States of America establish authoritative answers.
The criminal acts by The State of California's criminal justice system, supported by U.S. jurist and justices have created damages to each and every state within the union as well as every taxpayer. It is my intent to outline this complaint, establish elements of crimes by judicial confessions accompanied by indisputable evidence, confessions by U.S. jurist.
See (exhibit 1) complaint outlined, constitution (verbatim) as written! California and U.S. statutes are available as written upon request, online, or at any library. Black's Law Definitions are "in" Blacks Law Dictionary.
The constitutional guaranteed rights to any and all U.S. citizen, is to be able to present a Habeas Corpus / Collateral Challenge to the validity of ANY conviction. This is perfected by the presentation of allegations supported with evidence to establish a prima facie case to the clerk of the courts. Upon filing by the court clerk, the time tolls as to the duties demanded by the constitution. [note: to one in custody, filing is perfected upon placing in possession of correctional officer and/or institutional mail.]