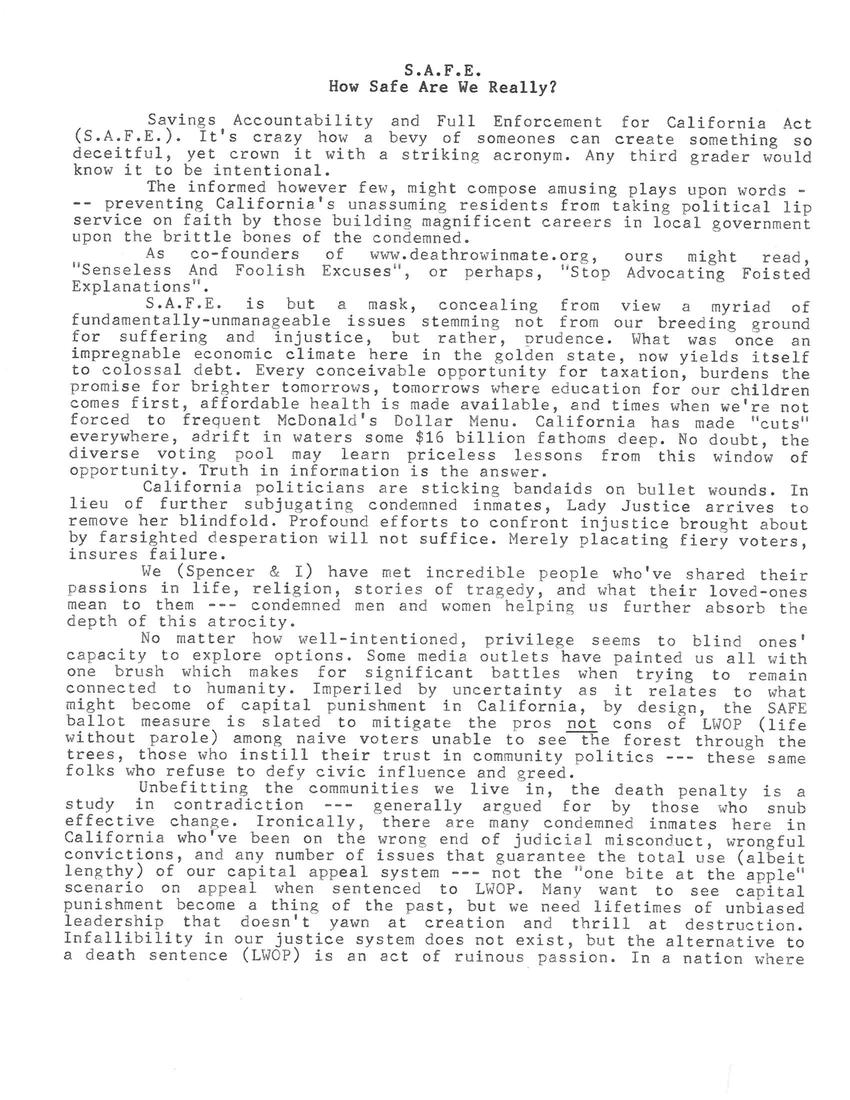 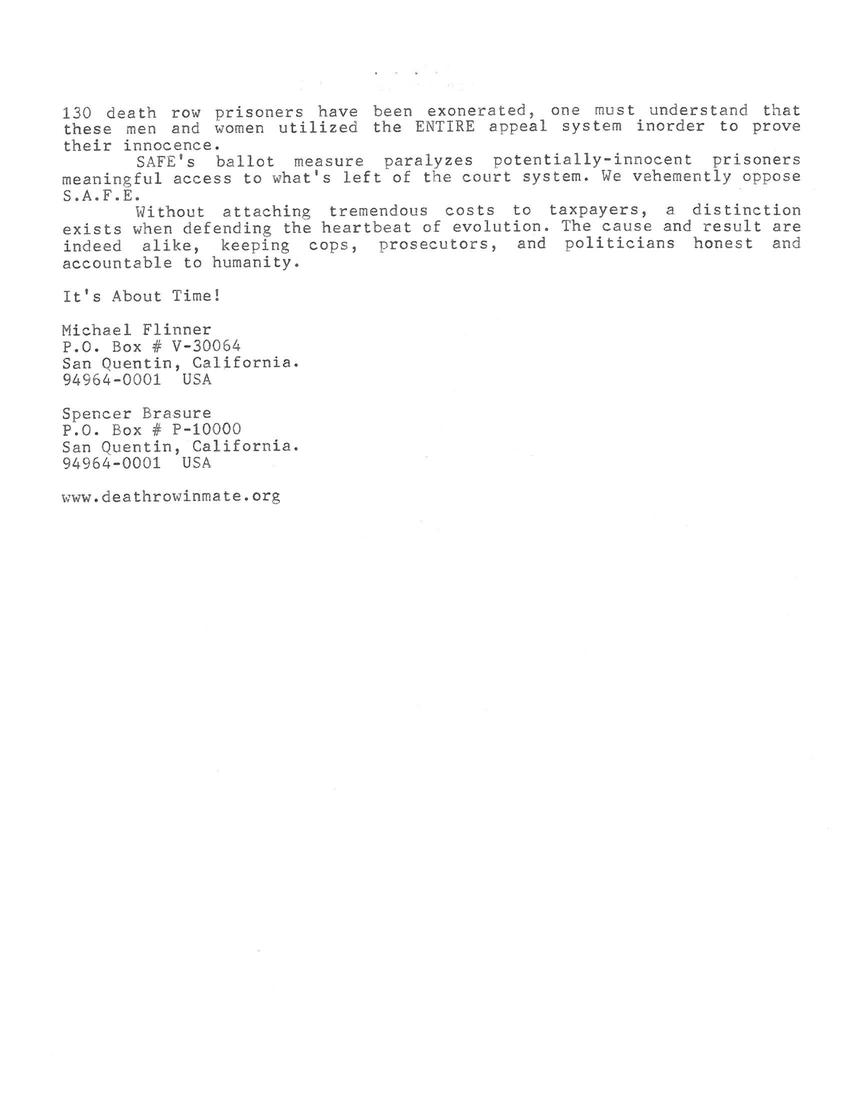 Savings Accountability and Full Enforcement for California Act (S.A.F.E.). It's crazy how a bevy of someones can create something so deceitful, yet crown it with a striking acronym. Any third grader would know it to be intentional.

The informed, however few, might compose amusing plays upon words, preventing California's unassuming residents from taking political lip service on faith by those building magnificent careers in local government upon the brittle bones of the condemned.

As co-founders of www.deathrowinmates.org, ours might read "Senseless and Foolish Excuses" or perhaps "Stop Advocating Foisted Explanations."

S.A.F.E. is but a mask concealing from view a myriad of fundamentally unmanageable issues stemming not from our breeding ground for suffering and injustice, but rather prudence. What was once an impregnable economic climate here in the golden state now yields itself to colossal debt. Every conceivable opportunity for taxation burdens the promise for brighter tomorrows, tomorrows where education for our children comes first, affordable health is made available, and times when we're not forced to frequent McDonald's Dollar Menu. California has made "cuts" everywhere, adrift in waters some $16 billion fathoms deep. No doubt, the diverse voting pool may learn priceless lessons for this window of opportunity. Truth in information is the answer.

We (Spencer and I) have met incredible people who've shared their passions in life, religion, stories of tragedy, and what their loved ones mean to them-condemned men and women helping us further absorb the depth of this atrocity.

No matter how well-intentioned, privilege seems to blind one's capability to explore options. Some media outlets have painted us all with one brush which makes for significant battles when trying to remain connected to humanity. Imperiled by uncertainty as it relates to what might become of capital punishment in California, by design, the SAFE ballot measure is slated to mitigate the pros not cons of LWOP (life without parole) among native voters unable to see the forest through the trees, those who instill their trust in community politics—these same folks who refuse to defy civic influence and greed.

Unfitting the communities we live in, the death penalty is a study in contradiction, generally argued for by those who snub effective change. Ironically, there are many condemned inmates here in California who've been on the wrong end of judicial misconduct, wrongful convictions, and any number of issues that guarantee the total use (albeit lengthy) of our capital appeal system—not the "one bite at the apple" scenario on appeal when sentenced to LWOP. Many want to see capital punishment become a thing of the past, but we need lifetimes of unbiased leadership that doesn't yawn at creation and thrill at destruction. Infallibility in our justice system does not exist, but the alternative to a death sentence (LWOP) is an act of ruinous passion. In a nation where 130 death row prisoners have been exonerated, one must understand that these men and women utilized the ENTIRE appeal system in order to prove their innocence.

Without attaching tremendous costs to taxpayers, a distinction exists when defending the heartbeat of evolution. The cause and result are indeed alike, keeping cops, prosecutors, and politicians honest and accountable to humanity.

Hey Spencer, do you remember me? Last names differen't. Curious if you actually remember who I am.....
(scanned reply – view as blog post)
uploaded April 16, 2013.  Original (PDF) 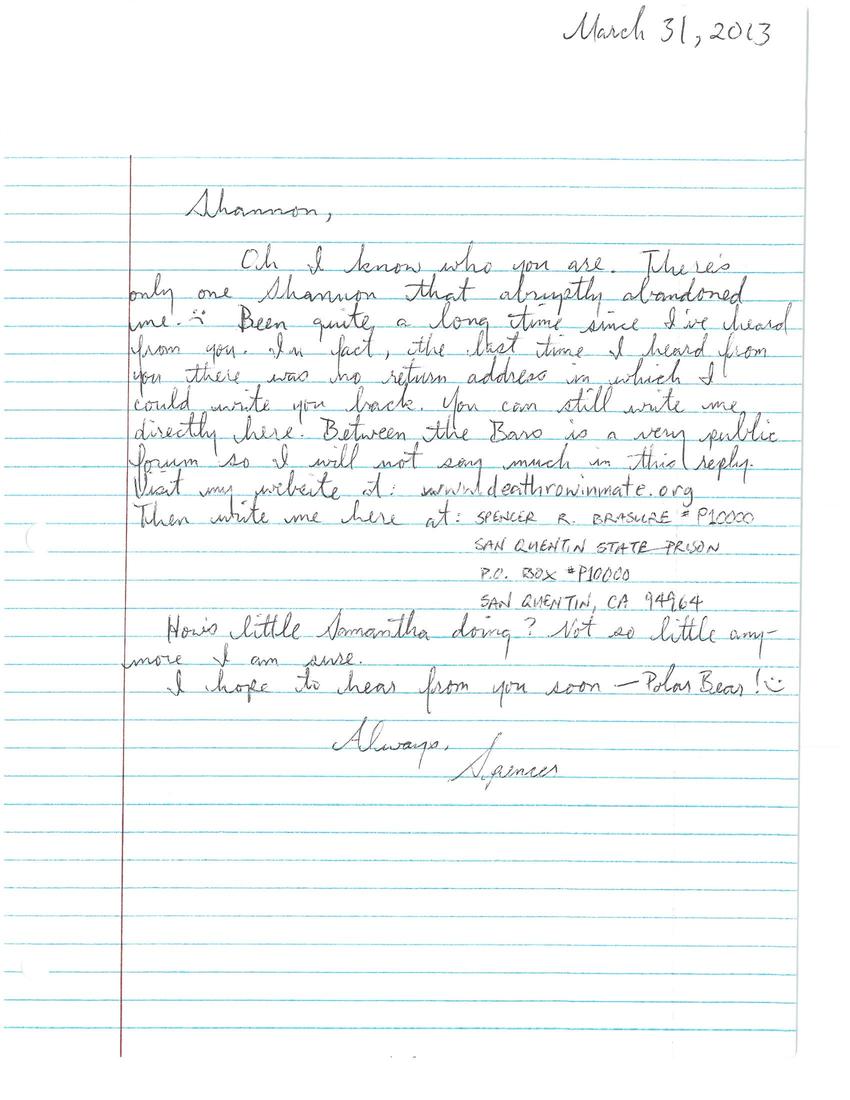 And so once again I am compelled.. As it sounds you remember quite well.. My circumstances are limited these days but I assure you, in the near future you'll here more about my past many years.. I may be assuming in saying, I've missed your letters too.. More to come soon.... Always, PB Shannon