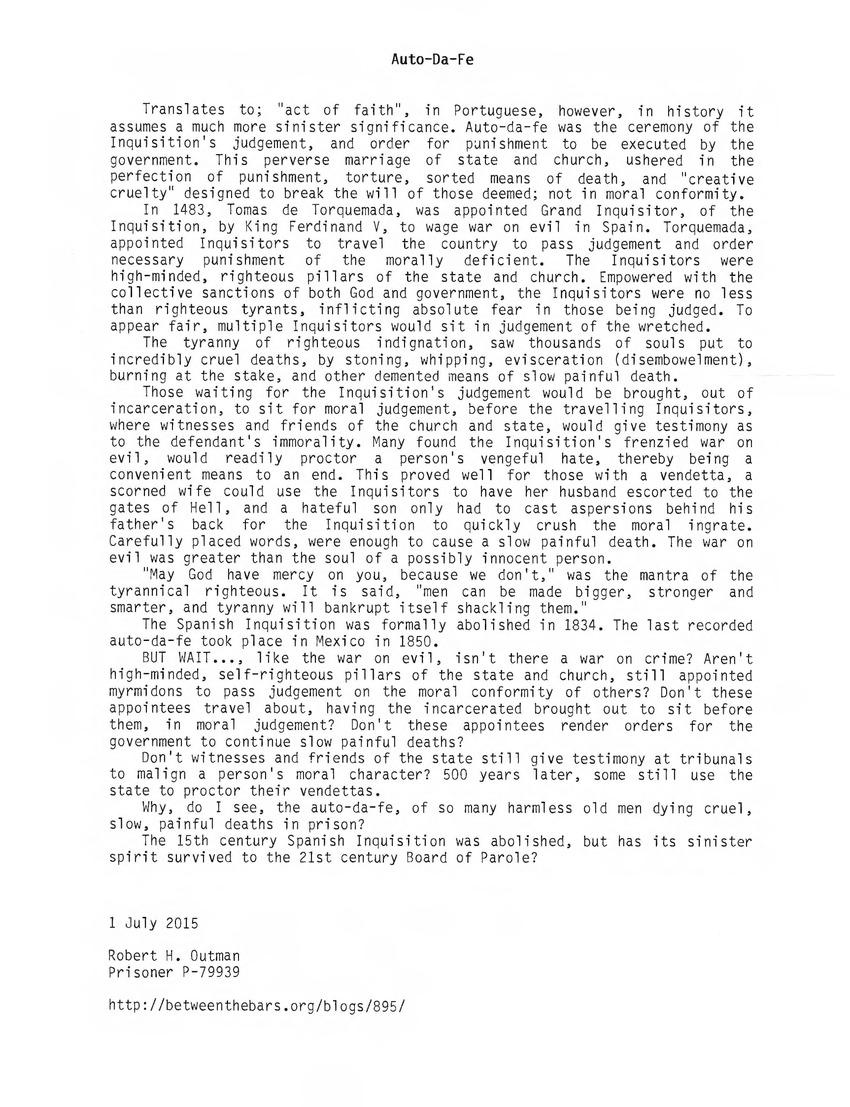 Translates to; "act of faith", in Portuguese, however, in history it assumes a much more sinister significance. Auto-da-fe was the ceremony of the Inquisition's judgment, and order for punishment to be executed by the government. This perverse marriage of state and church, ushered in the perfection of punishment, torture, sorted means of death, and "creative cruelty" designed to break the will of those deemed; not in moral conformity.

The tyranny of righteous indignation, saw thousands of souls put to incredibly cruel deaths, by stoning, whipping, evisceration (disembowelment), burning at the stake, and other demented means of slow painful death.

Those waiting for the Inquisition's judgement would be brought, out of incarceration, to sit for moral judgment, before the traveling Inquisitors, where witnesses and friends of the church and state, would give testimony as to the defendant's immorality. Many found the Inquisition's frenzied war on evil, would readily proctor a person's vengeful hate, thereby being a convenient means to an end. This proved well for those with a vendetta, a scorned wife could use the Inquisitors to have her husband escorted to the gates of Hell, and a hateful son only had to cast aspersions behind his father's back for the Inquisition to quickly crush the moral ingrate. Carefully placed words, were enough to cause a slow painful death. The war on evil was greater than the soul of a possibly innocent person.

"May God have mercy on you, because we don't," was the mantra of the tyrannical righteous. It is said, "men can be made bigger, stronger and smarter, and tyranny will bankrupt itself shackling them."

The Spanish Inquisition was formally abolished in 1834. The last recorded auto-da-fe took place in Mexico in 1850.

BUT WAIT..., like the war on evil, isn't there a war on crime? Aren't high-minded, self-righteous pillars of the state and church, still appointed myrmidons to pass judgment on the moral conformity of others? Don't these appointees travel about, having the incarcerated brought out to sit before them, in moral judgment? Don't these appointees render orders for the government to continue slow painful deaths?

Don't witnesses and friends of the state still give testimony at tribunals to malign a person's moral character? 500 years later, some still use the state to proctor their vendettas.

Why, do I see, the auto-da-fe, of so many harmless old men dying cruel, slow, painful deaths in prison?

The 15th century Spanish Inquisition was abolished, but has its sinister spirit survived to the 21st century Board of Parole?