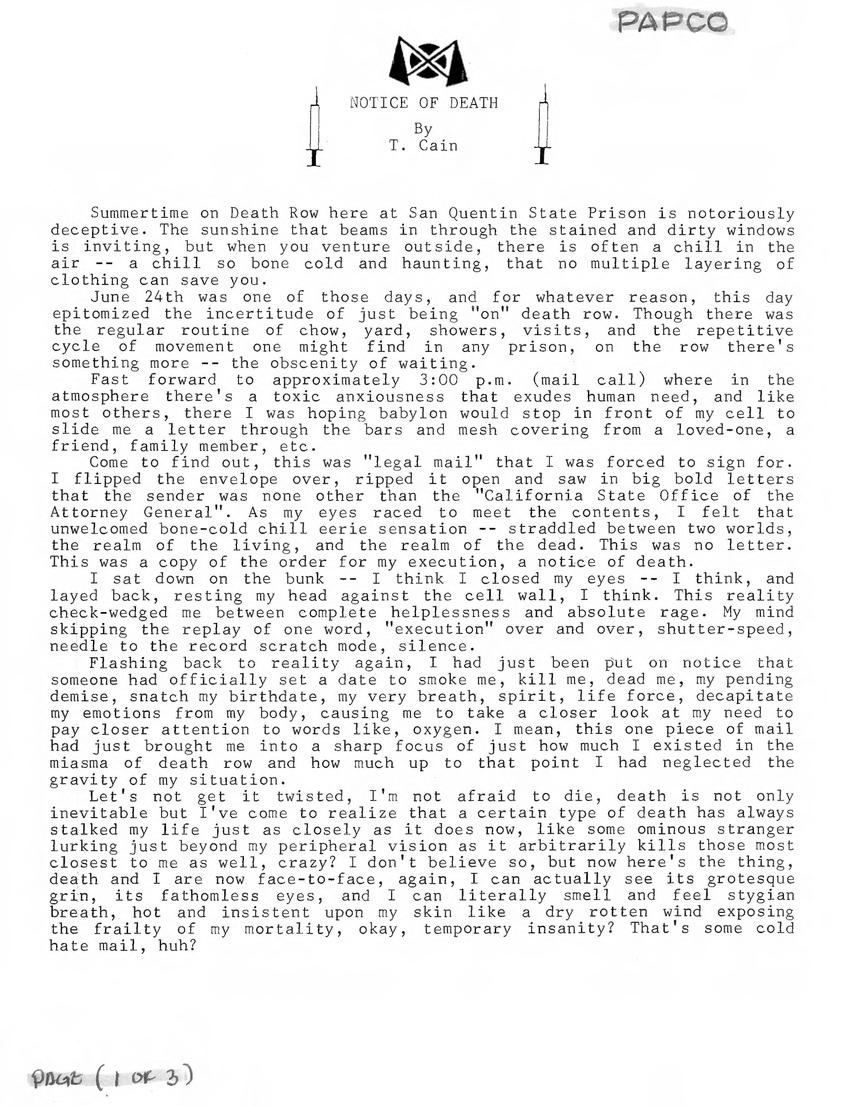 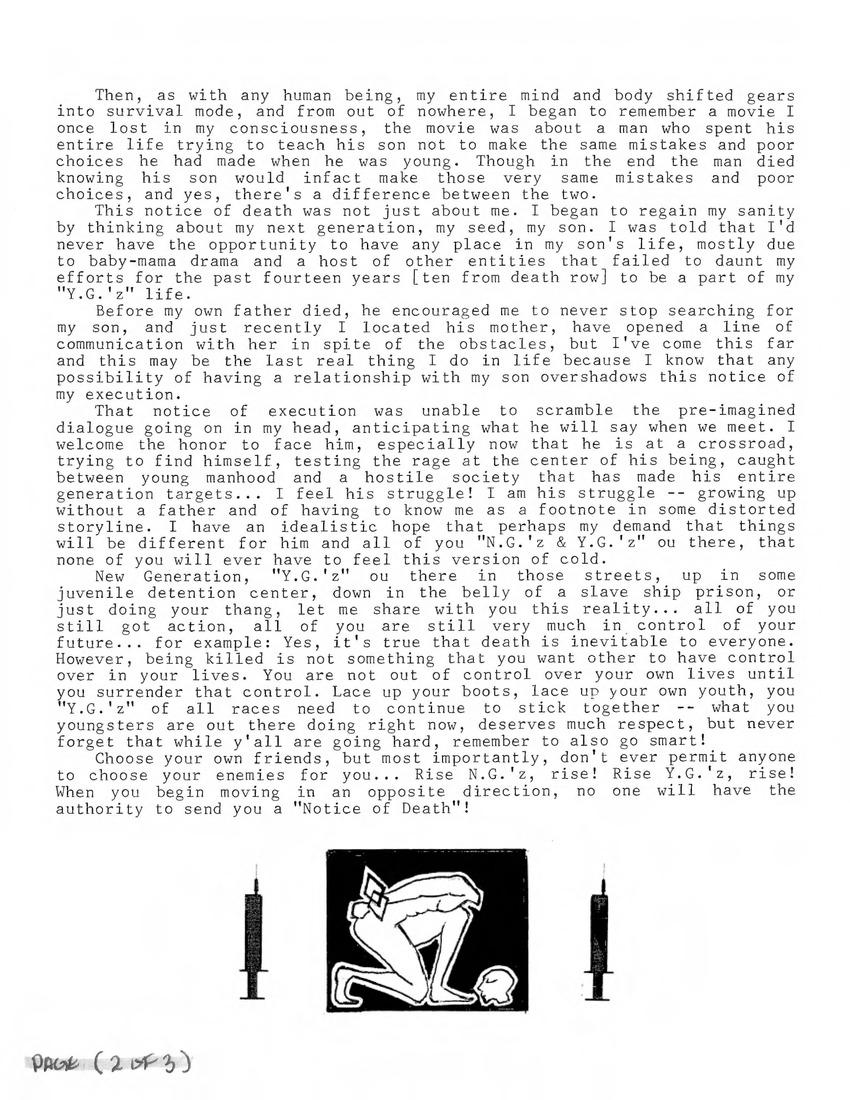 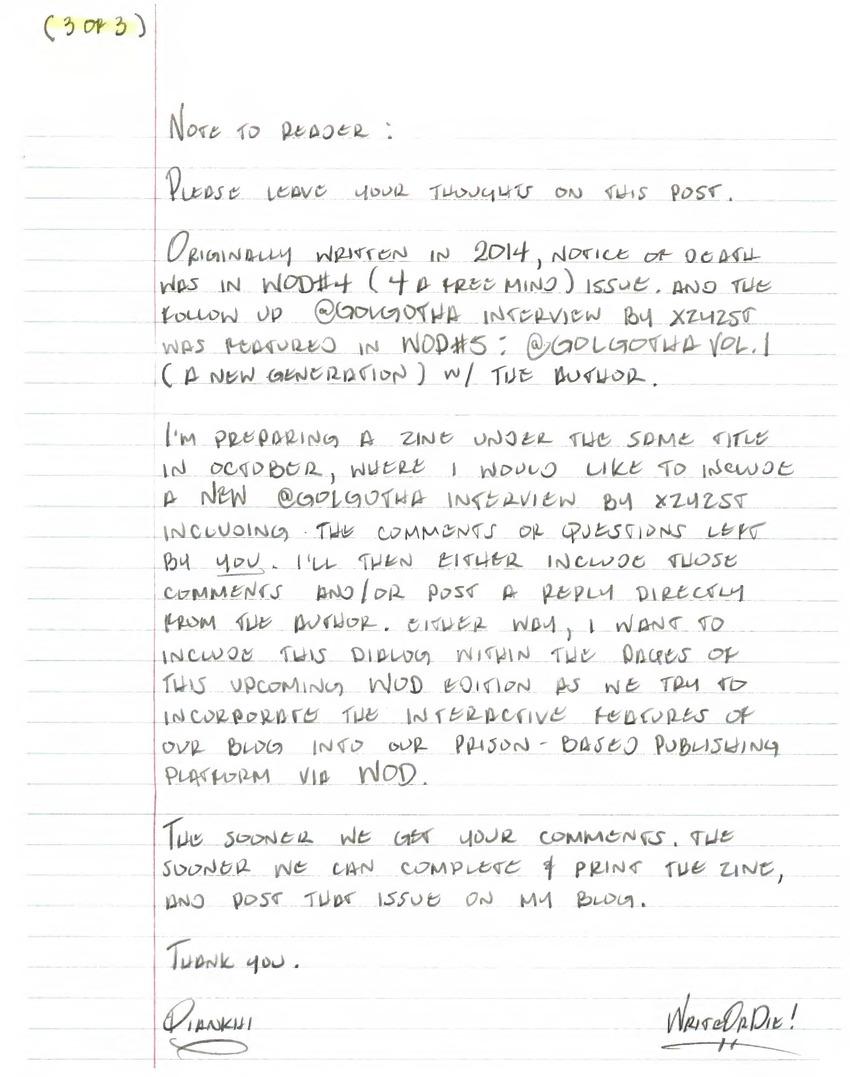 NOTICE OF DEATH
By
T. Cain

Summertime on Death Row here at San Quentin State Prison is notoriously deceptive. The sunshine that beams in through the stained and dirty windows is inviting, but when you venture outside, there is often a chill in the air -- a chill so bone cold and haunting, that no multiple layering of clothing can save you.
June 24th was one of those days, and for whatever reason, this day epitomized the incertitude of just being "on" death row. Though there was the regular routine of chow, yard, showers, visits, and the repetitive cycle of movement one might find in any prison, on the row there's something more -- the obscenity of waiting.
Fast forward to approximately 3:00 p.m. (mail call) where in the atmosphere there's a toxic anxiousness that exudes human need, and like most others, there I was hoping babylon would stop in front of my cell to slide me a letter through the bars and mesh covering from a loved-one, a friend, family member, etc.
Come to find out, this was "legal mail" that I was forced to sign for. I flipped the envelope over, ripped it open and saw in big bold letters that the sender was none other than the "California State Office of the Attorney General". As my eyes raced to meet the contents, I felt that unwelcomed bone-cold chill eerie sensation -- straddled between two worlds, the realm of the living, and the realm of the dead. This was no letter. This was a copy of the order for my execution, a notice of death.
I sat down on the bunk -- I think I closed my eyes -- I think, and layed back, resting my head against the cell wall, I think. This reality check-wedged me between complete helplessness and absolute rage. My mind skipping the replay of one word, "execution" over and over, shutter-speed, needle to the record scratch mode, silence.
Flashing back to reality again, I had just been put on notice that someone had officially set a date to smoke me, kill me, dead me, my pending demise, snatch my birthdate, my very breath, spirit, life force, decapitate my emotions from my body, causing me take a closer look at my need to pay closer attention to words like, oxygen. I mean, this one piece of mail had just brought me into a sharp focus of just how much I existed in the miasma of death row and how much up to that point I had neglected the gravity of my situation.
Let's not get it twisted, I'm not afraid to die, death is not only inevitable but I've come to realize that a certain type of death has always stalked my life just as closely as it does now, like some ominous stranger lurking just beyond my peripheral vision as it arbitrarily kills those most closest to me as well, crazy? I don't believe so, but now here's the thing, death and I are now face-to-face, again, I can actually see its grotesque grin, its fathomless eyes, and I can literally smell and feel stygian breath, hot and insistent upon my skin like a dry rotten wind exposing the frailty of my mortality, okay, temporary insanity? That's some cold hate mail, huh?

Then, as with any human being, my entire mind and body shifted gears into survival mode, and from out of nowhere, I began to remember a movie I once lost in my consciousness, the movie was about a man who spent his entire life trying to teach his son not to make the same mistakes and poor choices he had made when he was young. Though in the end the man died knowing his son would infact make those very same mistakes and poor choices, and yes, there's a difference between the two.
This notice of death was not just about me. I began to regain my sanity by thinking about my next generation, my seed, my son. I was told that I'd never have the opportunity to have any place in my son's life, mostly due to baby-mama drama and a host of other entities that failed to daunt my efforts for the past fourteen years [ten from death row] to be a part of my "Y.G.'z" life.
Before my own father died, he encouraged me to never stop searching for my son, and just recently I located his mother, have opened a line of communication with her in spite of the obstacles, but I've come this far and this may be the last real thing I do in life because I know that any possibility of having a relationship with my son overshadows this notice of my execution.
That notice of execution was unable to scramble the pre-imagined dialogue going on in my head, anticipating what he will say when we meet. I welcome the honor to face him, especially now that he is at a crossroad, trying to find himself, testing the rage at the center of his being, caught between young manhood and a hostile society that has made his entire generation targets... I feel his struggle! I am his struggle -- growing up without a father and of having to know me as a footnote in some distorted storyline. I have an idealistic hope that perhaps my demand that things will be different for him and all of you "N.G.'z & Y.G.'z" out there, that none of you will ever have to feel this version of cold.
New Generation, "Y.G.'z" out there in those streets, up in some juvenile detention center, down in the belly of a slave ship prison, or just doing your thang, let me share with you this reality... all of you still got action, all of you are still very much in control of your future... for example: Yes, it's true that death is inevitable to everyone. However, being killed is not something that you want others to have control over in your lives. You are not out of control over your own lives until you surrender that control. Lace up your boots, lace up your own youth, you "Y.G.'z" of all races need to continue to stick together -- what you youngsters are out there doing right now, deserves much respect, but never forget that while y'all are going hard, remember to also go smart!
Choose your own friends, but most importantly, don't ever permit anyone to choose your enemies for you... Rise N.G.'z, rise! Rise Y.G.'z, rise! When you begin moving in an opposite direction, no one will have the authority to send you a "Notice of Death"!

[image of syringe on left and right, in the middle a man bent down, his hands chained, and his head decapitated]

I'm preparing a zine under the same title in October, where I would like to include a new @Golgotha interview by X24250 including the comments or questions left by you. I'll then either include those comments and/or post a reply directly from the author. Either way, I want to include this dialog within the pages of this upcoming WOD edition as we try to incorporate the interactive features of our blog into our prison-based publishing platform via WOD.

The sooner we get your comments, the sooner we can complete & print the zine, and post that issue on my blog.

I am a Belgian woman, Rita, I feel pretty young although I am 67 yrs young. :)
We lived as a BE family in Utah (3yrs) and 4yrs in Ohio.
Our ypungest daughter Leslie was born in Utah and our oldest daughter Elke was born still in Be when we moved for the States.

Actually our 2 daughters then studied in American classes in Ohio.

Now they're 35 and 36 yrs young.Our AM/BE daughter moved to CA, San Diego with her BE husband They left with one son, Adric(almost 6 now) and Claire(almost 5) was born in SD.
The couple decided to stay in America. Well, I got her there and I have to give her back to America,I thought.:)

My oldest brother Paul lives with his 4 sons in Australia, after have lived in South Africa, Zimbabwe, Tasmania and now in Australia.
I've still one brother dr, and a younger sister as well.

I just read your letter on the blog.I didn't quite understand if you were on D/R or not? Can you once more clarify this, Paul?
I've to say that ypur writing style is quite good.Did you study prior to be in a prison?

Since 12 yrs I write with a few inmates and also two on D:R.
I hope you can read this first message, Paul?
As for now, receive my kind greetings,
Rita
(scanned reply – view as blog post)
uploaded March 3, 2016.  Original (PDF) 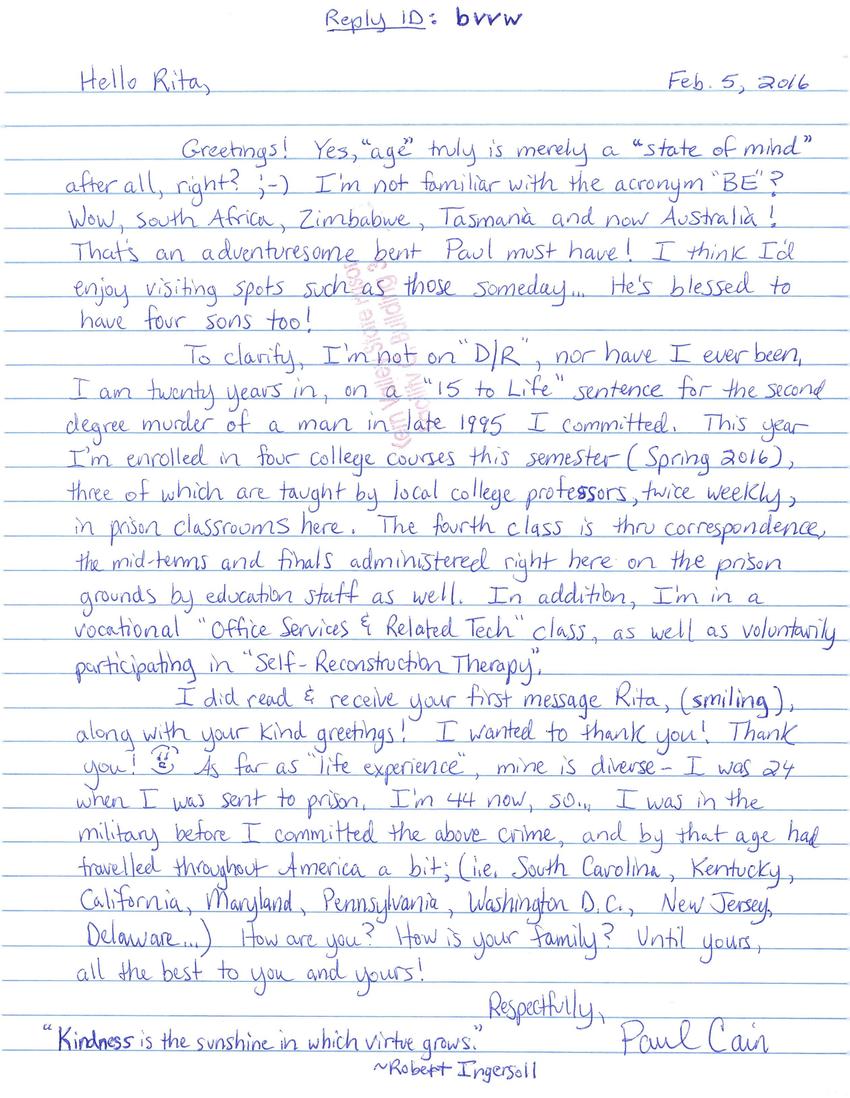 What's up brother? You may remember me seeing how we shared a lil guy named Regin. Yea..its me!!!! :)
She was going thru the internet and the mrs found you..i wanted to send .y love.where are you? I hope you're doing well my brother.
Hey Paul!.. how are you my brother!. I've been reading your forum and I'm so glad you are doing good!.. this is your old friend Aaron West.. from York,PA!. I remember we used to hang out all the time.. lift weights and run around.. I've often wondered how you are doing my brother... not sure if you will remember..ad ots been many many years!. I'm not sure of your address, otherwise I'd write you.. but either way know that you have loved ones and friends that are here for you!..
Let me know thar you got this and I'll write more.. and if you need anything bro.. let me know!. Aaron West
Aaron West
47 S. 8th st.
Lebanon, PA. 17042
(scanned reply – view as blog post)
uploaded March 13, 2022.  Original (PDF) 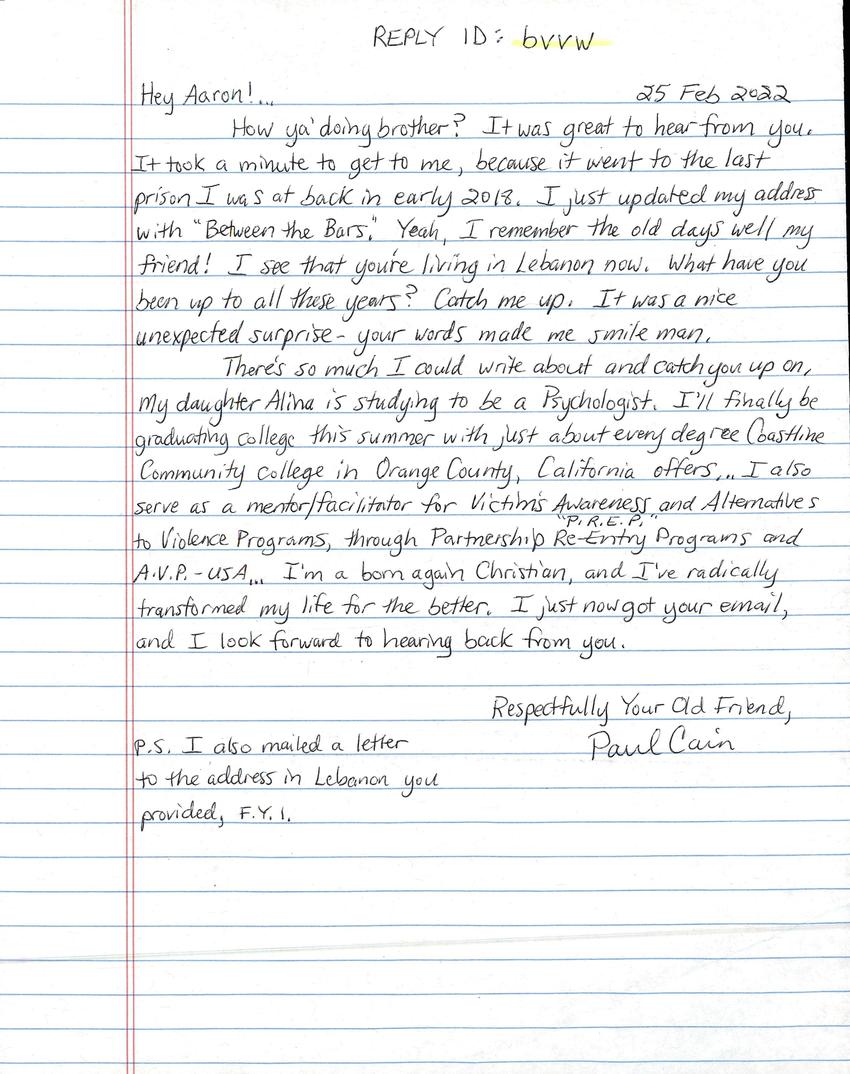