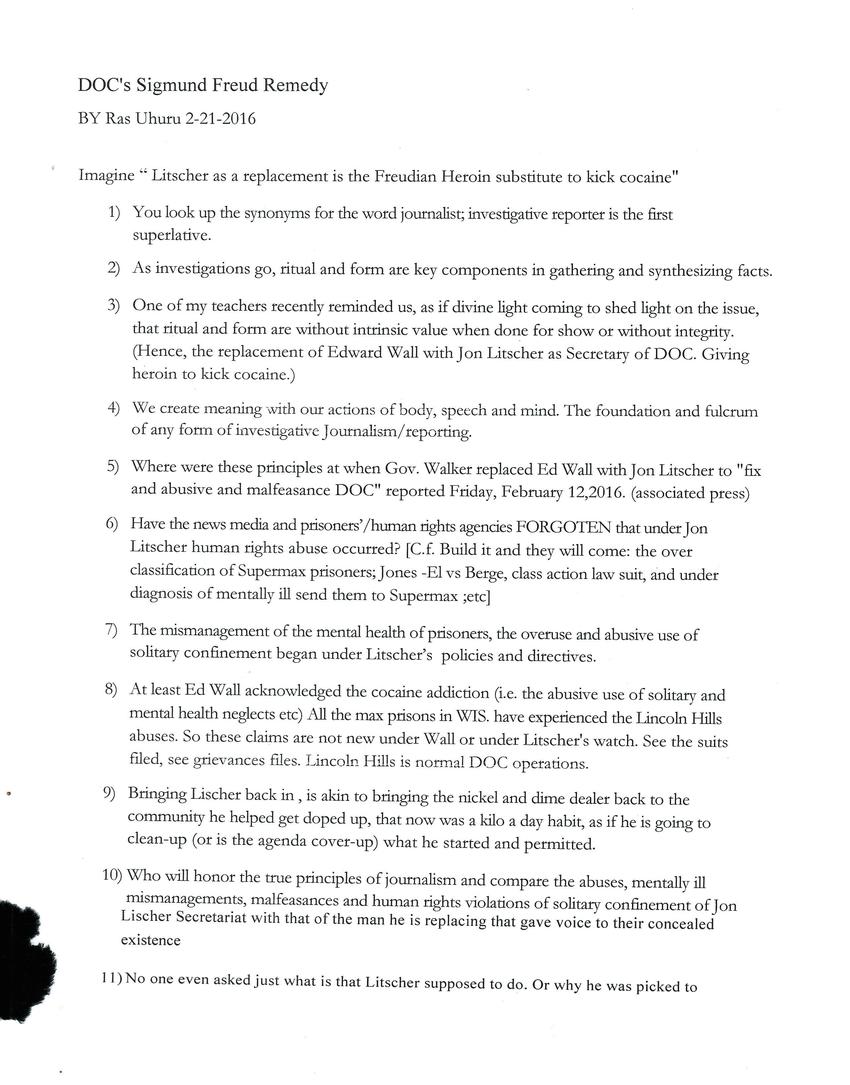 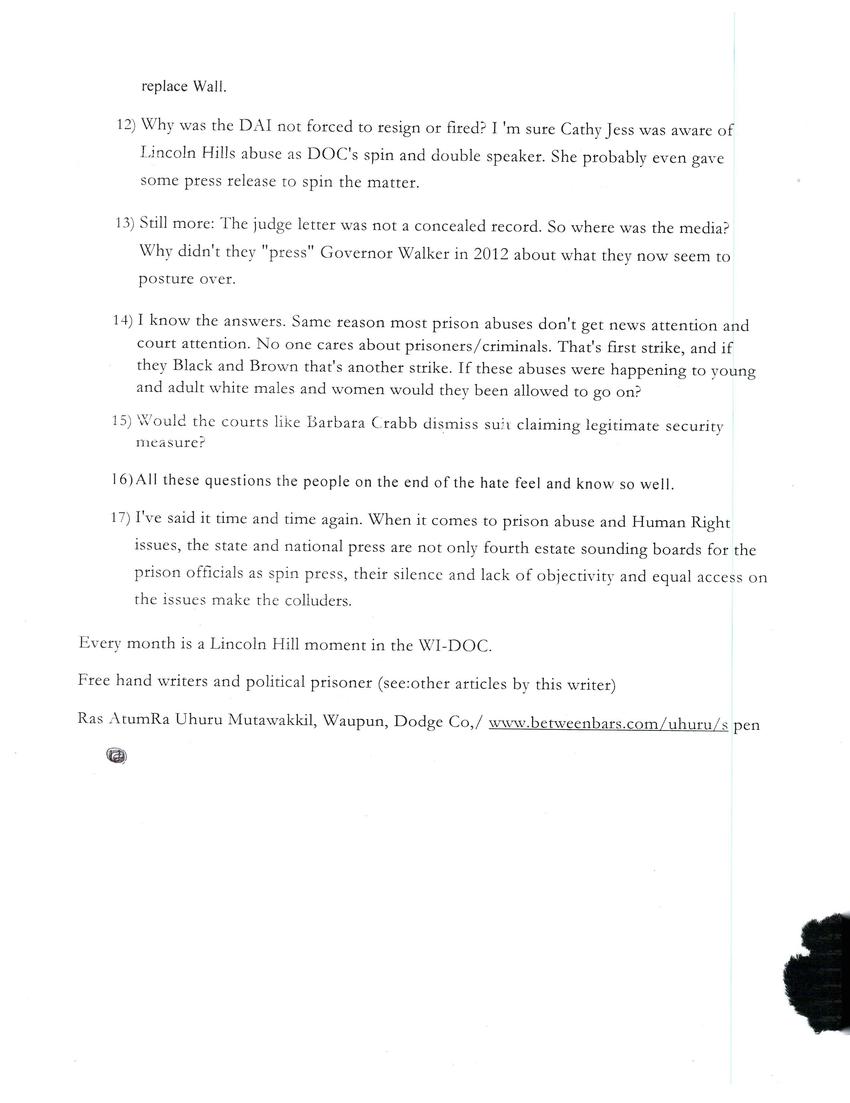 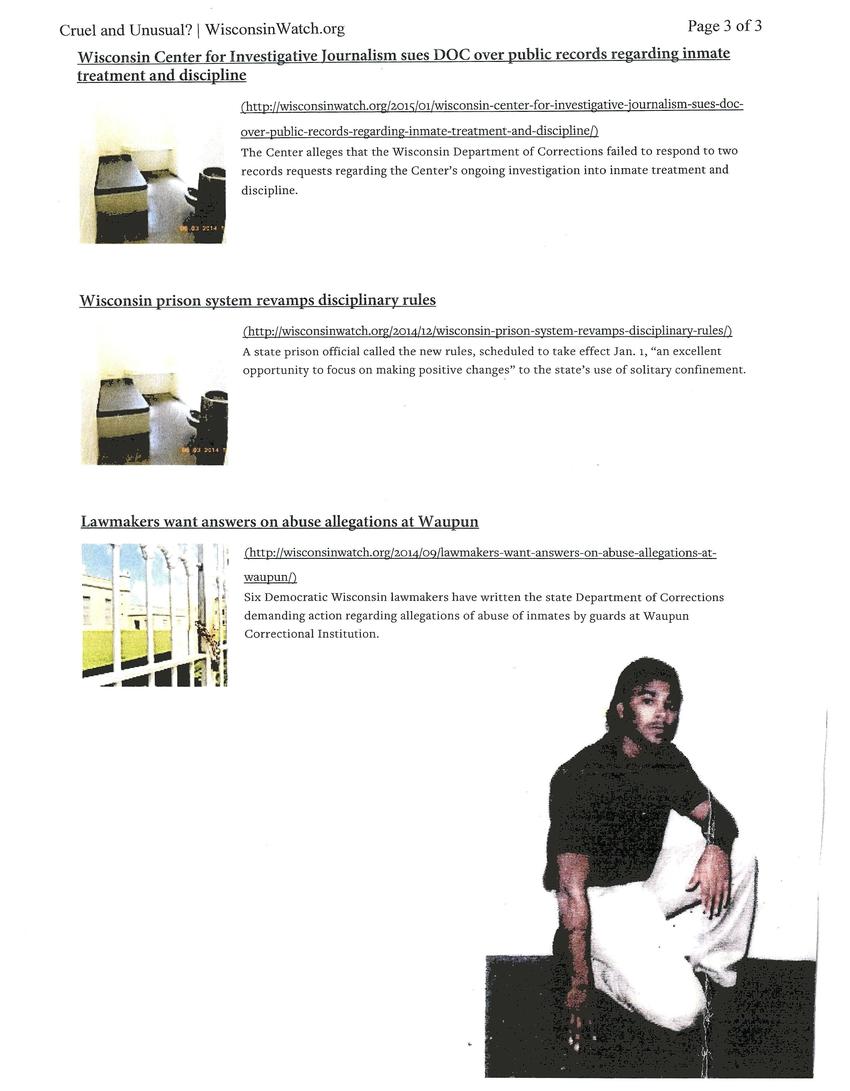 1) You look up the synonyms for the word journalist; investigative reporter is the first superlative.

2) As investigations go, ritual and form are key components in gathering and synthesizing facts.

3) One of my teachers recently reminded us, as if divine light coming to shed light on the issue, that ritual and form are without intrinsic value when done for show or without integrity. (Hence, the replacement of Edward Wall with Jon Litscher as Secretary of DOC. Giving heroin to kick cocaine.)

4) We create meaning with our actions of body, speech and mind. The foundation and fulcrum of any form of investigative Journalism/reporting.

5)Where were these principles at when Gov. Walker replaced Ed Wall with Jon Litscher to "fix an abusive and malfeasance DOC" reported Friday, February 12, 2016. (associated press)

6) Have the news media and prisoners'/human rights agencies FORGOTTEN that under Jon Litscher human rights abuse occurred? [C.f. Build it and they will come; the over classification of Supermax prisoners; Jones-El vs Berge, class action law suit, and under diagnosis of mentally ill send them to Supermax; etc.]

7) The mismanagement of the mental health of prisoners, the overuse and abusive use of solitary confinement began under Litscher's policies and directives.

8) At least Ed Wall acknowledged the cocaine addiction (i.e. the abusive use of solitary and mental health neglects, etc.) All the max prisons in WIS. have experienced the Lincoln Hills abuses. So these claims are not new under Wall or under Litscher's watch. See the suits
filed, see grievances files. Lincoln Hills is normal DOC operations.

9) Bringing Litscher back in, is akin to bringing the nickel and dime dealer back to the community he helped get doped up, that now was a kilo a day habit, as if he is going to clean-up (or is the agenda cover-up) what he started and permitted.

10) Who will honer the true principles of journalism and compare the abuses, mentally ill mismanagements, malfeasances and human rights violations of solitary confinement of Jon Litscher Secretariat with that of the man he is replacing that gave voice to their concealed
existence.

11) No one even asked just what is that Litscher supposed to do. Or why he was picked to replace Wall.

12) Why was the DAI not forced to resign or fired? I'm sure Cathy Jess was aware of Lincoln Hills abuse as DOC's spin and double speaker. She probably even gave some press release to spin the matter.

13) Still more: The judge letter was not a concealed record. So where was the media? Why didn't they "press" Governor Walker in 2012 about what they now seem to posture over.

14) I know the answers. Same reason most prison abuses don't get news attention and court attention. No one cares about prisoners/criminals. That's first strike, and if they Black and Brown that's another strike. If these abuses were happening to young and adult white males and women would they been allowed to go on?

16) All these questions the people on the end of the hate feel and know so well.

17) I've said it time and time again. When it comes to prison abuse and Human Right issues, the state and national press are not only fourth estate sounding boards for the prison officials as spin press, their silence and lack of objectivity and equal access on the issues make the colluders.

Cruel and Unusual? WisconsinWatch.org
Page 3 of 3
Wisconsin Center for Investigative Journalism sues DOC over public records regarding inmate treatment and discipline
[Photo of a prison cell with a bed]
(http://wisconsinwatch.org/2015/01/wisconsin-center-for-investigative-journalism-sues-doc-over-public-records-regarding-inmate-treatment-and-discipline/)
The Center alleges that the Wisconsin Department of Corrections failed to respond to two records requests regarding the Center's ongoing investigation into inmate treatment and discipline.

Wisconsin prison system revamps disciplinary rules
[Photo of a prison cell with a bed]
(http;//wisconsinwatch.org/2014/12/wisconsin-prison-system-revamps-disciplinary-rules/)
A state prison official called the new rules, scheduled to take effect Jan. 1, "an excellent opportunity to focus on making positive changes" to the state's use of solitary confinement.

Lawmakers want answers on abuse allegations at Waupun
[Photo of white painted wrought iron gates held closed by a chain. Beyond the gates is an expanse of grass leading to a prison building.]
(http://wisonsinwatch.org/2014/09/lawmakers-want-answers-on-abuse-allegations-at-waupun/)
Six Democratic Wisconsin lawmakers have written the state Department of Corrections demanding action regarding allegations of abuse of inmates by guards at Waupun Correctional Institution.
[Photo of a bearded black male, wearing white trousers and a black short-sleeved shirt, kneeling on his right knee with the fingertips of his right hand touching the floor, his left forearm resting on his left thigh.]