To Whom Ever Read This 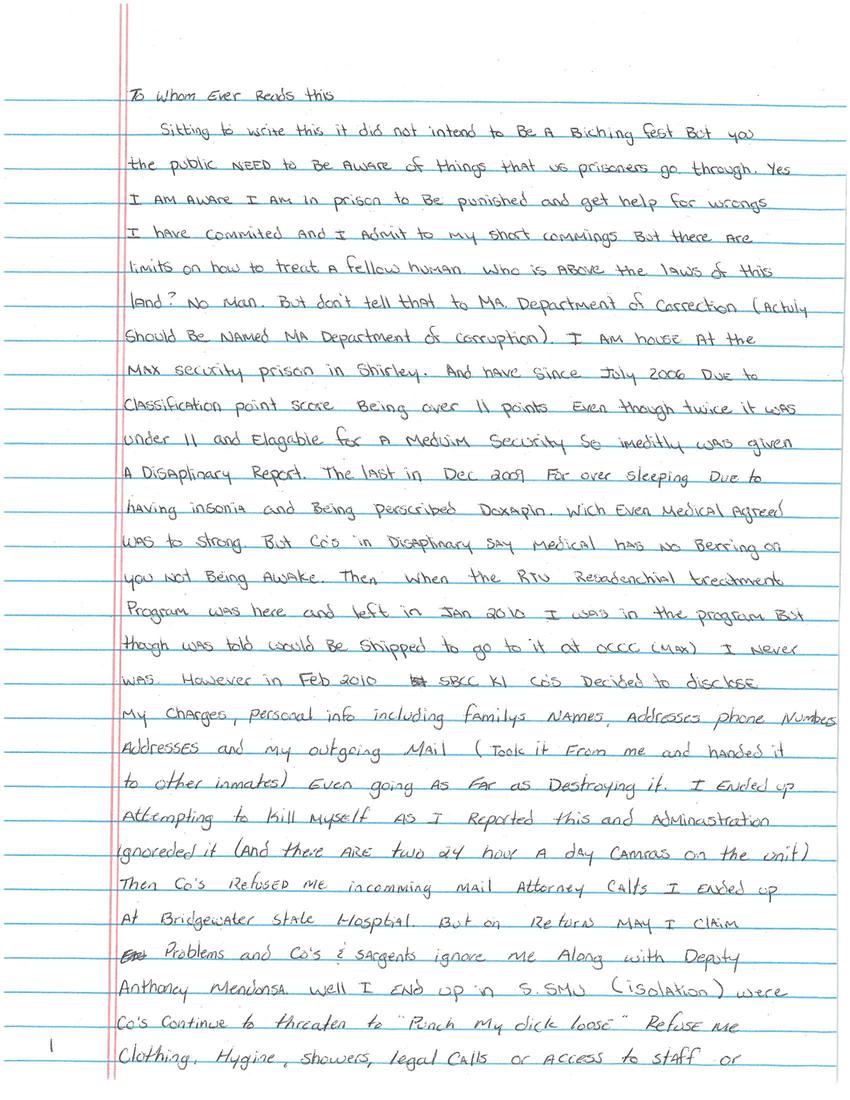 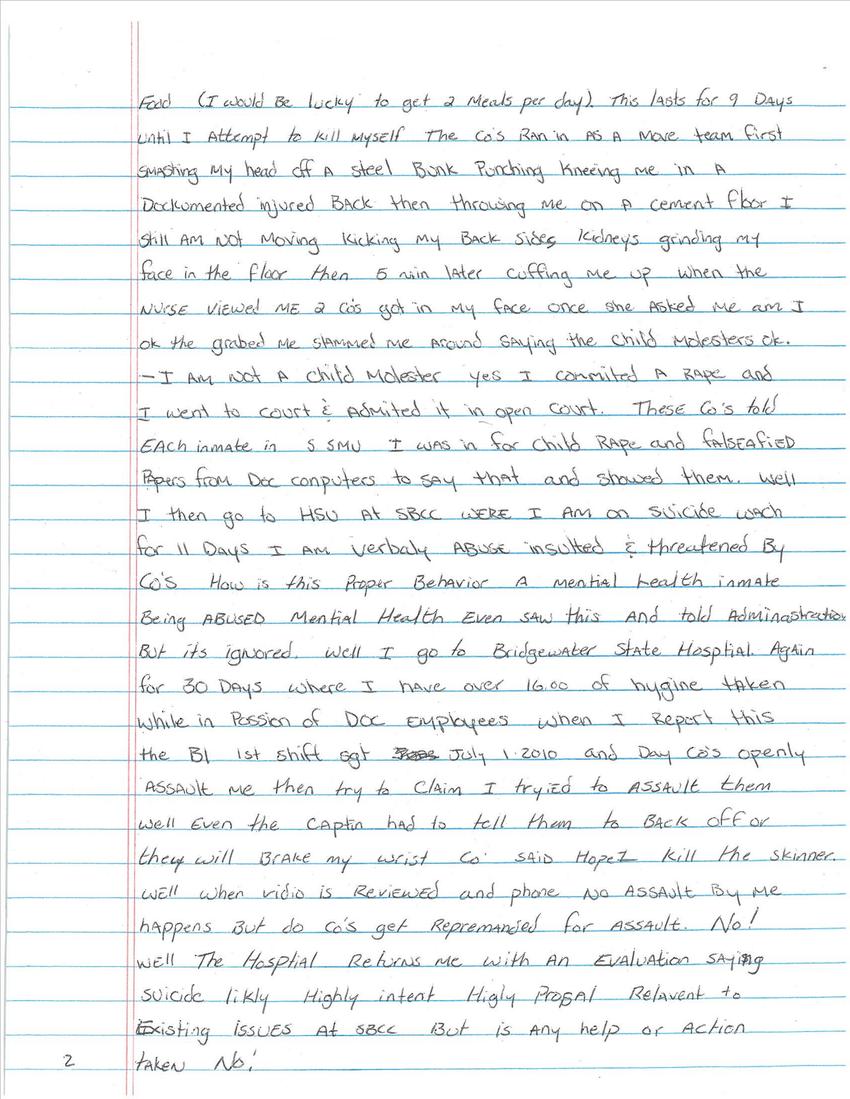 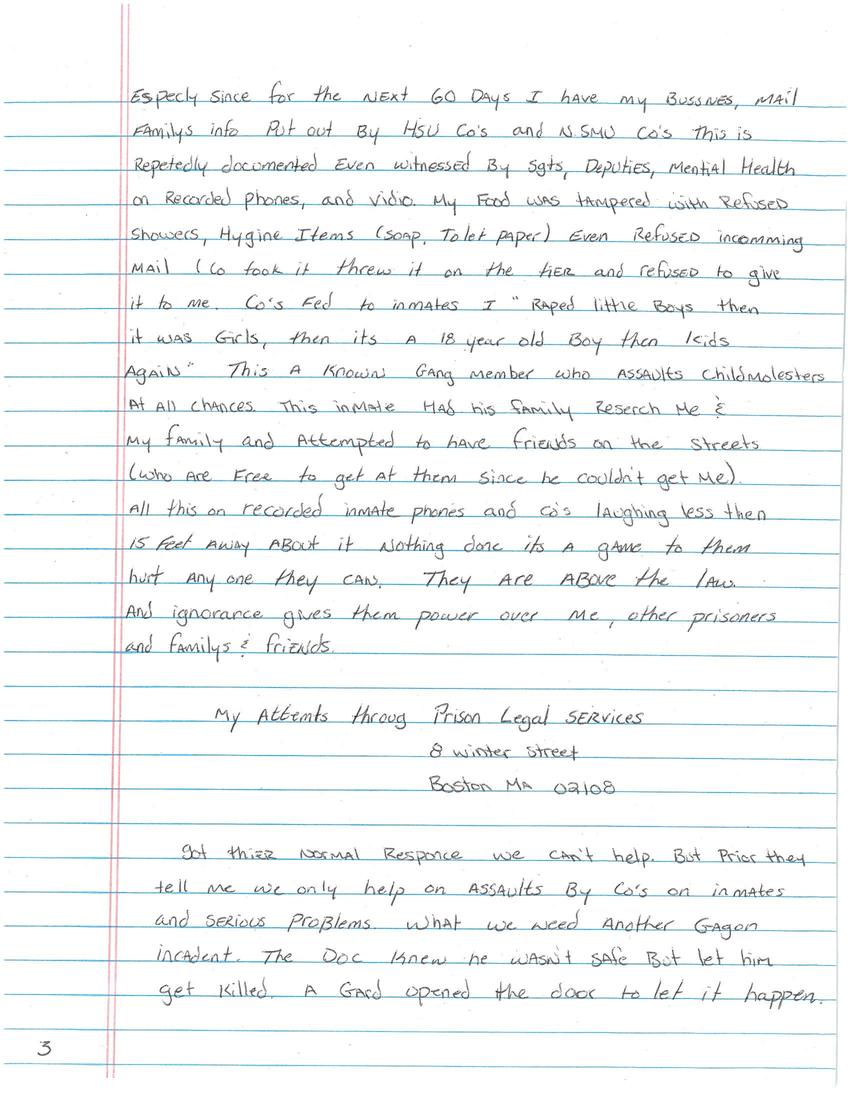 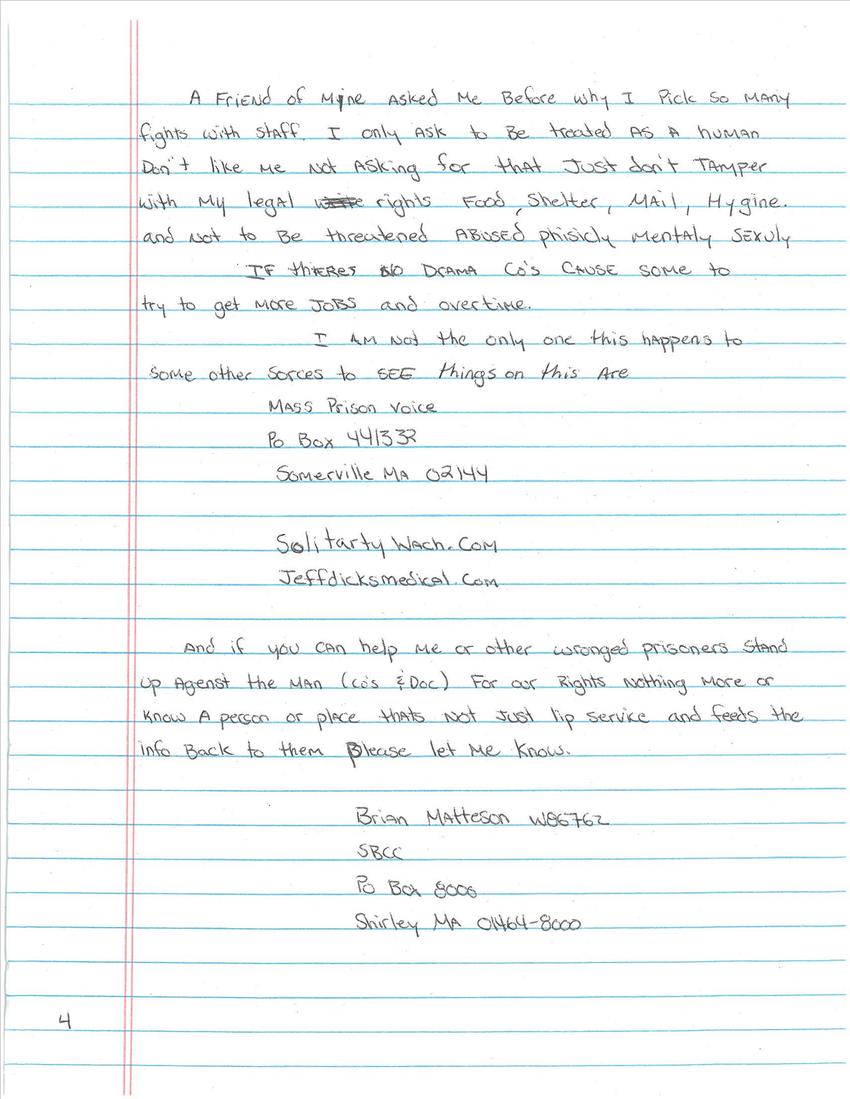 To whomever reads this,

Sitting to write this without the intents to be a bitching fest, but you the public needs to be aware of the things that us prisoners go through. Yes, I am aware I am in prison to be punished and get help for wrongs I have committed, and I admit to my shortcomings, but there are limits on how to treat a fellow human. Who is above the laws of this land? No man.

But don't tell that to the MA Department of Corrections (actually should be named MA Department of Corruption). I am housed at the max security prison in Shirley since July 2006 due to classification point scare of being over 11 points, even though it was under 11 twice and eligible for a medium security prison. I was immediately given a disciplinary report. The last was in Dec. 2009 for over-sleeping due to insomnia and being prescribed doxapin, which even Medical agreed was too strong. But COs in Disciplinary says Medical has no bearing on you not being awake. Then, when the RIU Residential Treatment program was here and left in Jan. 2010, I was in the program but was told that I would be shipped to go to it at OCCC (Max). I never was.

However, in Feb. 2010, SBCC KI CPs decided to disclose my charges and personal information, including my family's names, addresses, phone numbers, and my outgoing mail. They took it from me and handed it to other inmates, even going as far as destroying it. I ended up attempting to kill myself, as I reported this and Administration ignored it. And there are two 24 hour a day cameras on the unit. Then COs refused me incoming mail and attorney calls.

I ended up at Bridgewater State Hospital. When I returned on May, I claimed I had problems and the COs and Sergents ignored me, along with Deputy Anthony Mendoza. Well, I ended up in S.SMU (isolation) where COs continue to threaten to "punch my clock loose." They refuse me clothing, hygiene, showers, legal calls and access to staff or food. I would be lucky to get a meal per day. This lasts for nine days until I attempted to kill myself. The COs ran in. A move team first smashed my head off a steel bunk, punching and kicking me in a documented injured back. Then they threw me on the cement floor. I didn't move. They kicked my backsides, kidneys, ground my face into the floor. Then five minutes later, they cuffed me up.

When the nurse saw me, two COs got in my face at once. She asked about me, and I was grabbed and slammed around, saying that child molesters are okay.

I am not a child molester. Yes, I committed a rape, and I went to court and admitted it in open court. These COs told each inmate in S.SMU that I was in for child rape and showed them falsified papers from the DOC computers to say that.

Well, I then go to HSU at SBCC where I am on suicide watch for 11 days. I am verbally abused, insulted, and threatened by COs. How is this proper behavior? A mentally damaged inmate is being abused in mental health. Even saw this and told the Administration, but it's ignored.

Well, I go to Bridgewater State Hospital again for 30 days where I have over $16.00 of hygiene taken while I was in the possession of DOC employees. When I reported this, the BI 1st shift Sergent and day COs openly assaulted me on July 1, 2010. Then they tried to claim that I tried to assaulted them. Well, even the captain had to tell them to back off or they will break my wrist. CO said, "Hope I kill the skinner."

Well, when the video is reviewed and that no assault by me is phoned in, do the COs get reprimanded for assault? No!

The hospital returns me with an evaluation saying "suicide likely, highly intent. Highly probable. Relevant to existing issues at SBCC." But is any help or action taken? No!

Especially since for the next 60 days I have, my business mail, my family's info were put out by HSU COs and N.SMU COs. This is repeatedly documented even witnessed by Sgts, Deputies, Mental Health on recorded phones and video.

My food was tampered with. I was refused showers, hygienic items (soap, toilet paper), even refused incoming mail. The COs took it and threw it on the tier, refusing to give it to me. COs fed to inmates that I raped little boys; then it was girls; then it was a 18-year-old boy; then kids again.

This is a known gang member who assaults child molesters at any chance he gets. This inmate has his family research me and my family. He attempted to get to my family with his friends on the street, who are free to get at them since he couldn't get me. All of this is recorded on the inmates' phones and the COs laughing less than 15 feet away about it. Nothing is done about it. It's all a game to them.

They hurt anyone they can. They think they are above the law. Ignorance gives them power over me, other prisoners, our families and our friends.

My attempts to get through:
Prison Legal Services
8 Winter Street
Boston, MA 02108

Got their normal response. "We can't help." But prior to my request, they told me, "We only help assaults by COs on inmates and other serious problems."

What we need is another Gagom Incident. The DOC knew he wasn't safe but they let him get killed. A guard opened the door and let it happen.

A friend of mine asked me before why I pick so many fights with the staff. I only asked to be treated as a human. Don't like me, I'm not asking for that. Just don't tamper with my legal rights: food, shelter, mail, hygiene. I don't want to threatened or abused, physically, mentally or sexually.

If there's no drama, COs cause some to get more jobs and overtime.

I am not the only one this happens to. Some other sources to see things on this are:

And if you can help me or other wronged prisoners stand up against the man (COs and DOC) for our rights nothing more, or know a person or a place that's not just lip service and feeds info back to them, please let me know.

What a heartbreaking read! And you're right, the things you explain don't seem to be isolated incidents. I've read similar blog posts on this site from others in super max facilities. I don't live in the USA and the responses from the services set up to assist you with these types of issues seem to relay the same message... they don't have enough funding to act. I truely wish I had something more useful to add. As a Psychology student I couldn't be more appauled in the message you relay here.