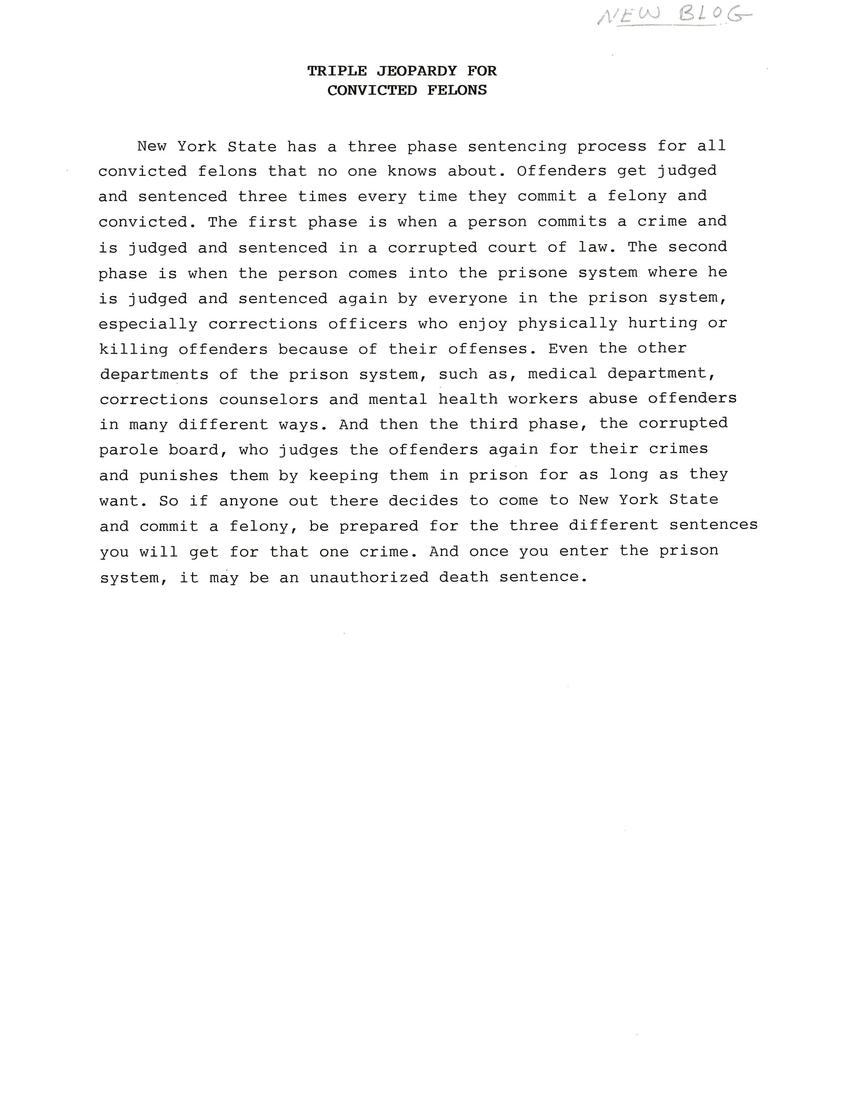 New York State has a three phase sentencing process for all convicted felons that no one knows about. Offenders get judged and sentenced three times every time they commit a felony and convicted. The first phase is when a person commits a crime and is judged and sentenced in a corrupted court of law. The second phase is when the person comes into the prison system where he is judged and sentenced again by everyone in the prison system, especially corrections officers who enjoy physically hurting or killing offenders because of their offenses. Even the other corrections counselors and mental health workers abuse offenders in many different ways. And then the third offenders, again for their crimes, and punishes them by keeping them in prison for as long as they want.

So if anyone out there decides to come to New York state and commit a felony, be prepared for the three different sentences you will get for that one crime. And once you enter the prison system, it may be an unauthorized death sentence.

It surely is real severe, Henry!To start in a corrupted court... no way to fight all of this. :o
hello Henry,,

It is been a while that I wrote you; tonight I'm leaving again my house to do a babysit at my daughter's, Elke. For Lynn, 3 and a half yrs old.
Before I was 10 days at our coast- mom a short week- to care for her, because she still had vacation time and her both parents work. Lars, the boy of 1 and a half is in a childcare every day.I had so much fun with Lynn; we did lots of activities together.A friend came over for one day when mom left already and also my sister Joke(=Yoke).The weather was splendid.Schools resume in September.
I read in your latest letter that you have a window and can see animals. I am glad you do!As you love them. :)My next letter will contain some animals.George was placed with older guys. Young people are so very hectic!He's at a relatively dangerous prison:Menard. He now has a window! and sees the trains.I am so glad he does have one!All what makes him happy, makes me happy!He has 4 times yard, where the other side he was, has only 2.He enjoys his music on his new MP3 player. He really is a music lover. He played the guitar, till he had to give it in, years ago! :( I will paint a painting for a contest too: Theme: 'Zone' A judge will accept it or not. I will paint some nature scene. Abstract or not?
Also I will do a juice cure to purify my body.It tales 7 days. One looses weight as well: 3 kilos at least. Are you still studying? How does that work out? Also still working in the kitchen? How is your food over there, Henry? it is very bad in Illinois. That state is broke! Less money now with Trump.George worked at it to have a decent menu... but to no avail. They just don't care. :(
How about your daughter and other children? Do you hear from them, Henry?
Bart will pick me up in a while to bring me to their house.

I wish you a good health and strength to keep up with your life!All the best, take care and have a big hug from Rita!