New York State Judges need to rule according to the law 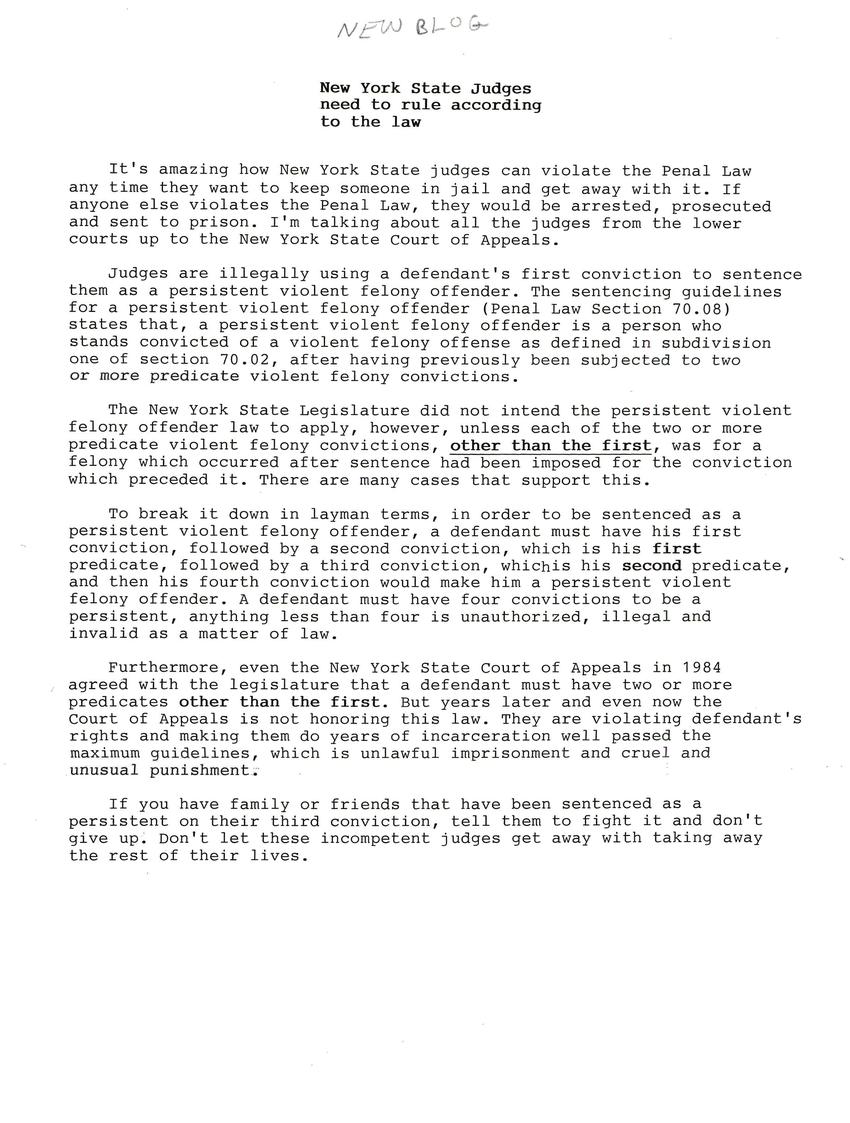 New York State Judges Need to Rule According to the Law

It's amazing how New York state judges can violate the penal law any time they want to keep someone in jail and get away with it. If anyone else violates the penal law, they would get arrested, prosecuted and sent to jail. I'm talking about the judges from the lower courts up to the New York state court of appeals.

The New York state legislature did not intend the persistent violent felony offender law to apply, however, unless each of the two or more predicate violent felony convictions, other than the first, was for a felony which occurred after sentence had been imposed for the conviction which preceded it. There are many cases that support this.

Furthermore, even the New York state court of appeals in 1984 agreed with the legislature that a defendant must have two or more predicates other than the first. But years later and even now, the court of appeals is not honoring this law. They are violating defendants' rights and making them do years of incarceration well past the maximum guidelines, which is unlawful imprisonment and cruel and unusual punishment.

If you have family or friends that have been sentenced as a persistent on their third conviction, tell them to fight it and don't give up. Don't let these incompetent judges get away with taking away the rest of their lives.

Hello Henry, first let me say it is a nice surprise to hear from you. Second I'm not sure that I'm comfortable corresponding this way. I see at the bottom of the page there is an email option, can you receive and send emails? I will try sending you one I guess and see what happens. According to my GPS your about 80-95 miles from me depending on route and traffic. I remember Angelo and the rest from Sullivan, that's where I met Kip and me and Dylan spent a whole lot of time in the Law Library researching Kip's case. I'll try email and a letter next as I have a lot to tell you. I almost died 3 times since September 2016, I'm currently on disability and trying to stay out of the Hospital and pay my bills. I spent more time in the Hospital between 9/26/16 and 2/12/17 then at home. I was admitted on 5 separate occasions and in between the longest time at home was less than a month. I'm finally starting to do better as I've now been at home since 2/12/17. I was diagnosed with Stage 3 Esophageal Cancer and have a 40% chance of survival over the next five years. The operation to remove my esophagus took 8 hours and since then I've had 9 other procedures due to complications. It's almost midnight and I need to stop to take medication which I take through what's called a "J" tube which is also how I get most of my nutrition. I also have a MRI scheduled for 11a.m. tomorrow morning and need to get some rest. I'll get back to u later. Send me visiting instructions and rules also the phone number of the Facility and a name on the slim chance I can visit I'd need to coordinate a few things such as my medication. Till next time, your friend, Glenn