Evil, In Thy Service 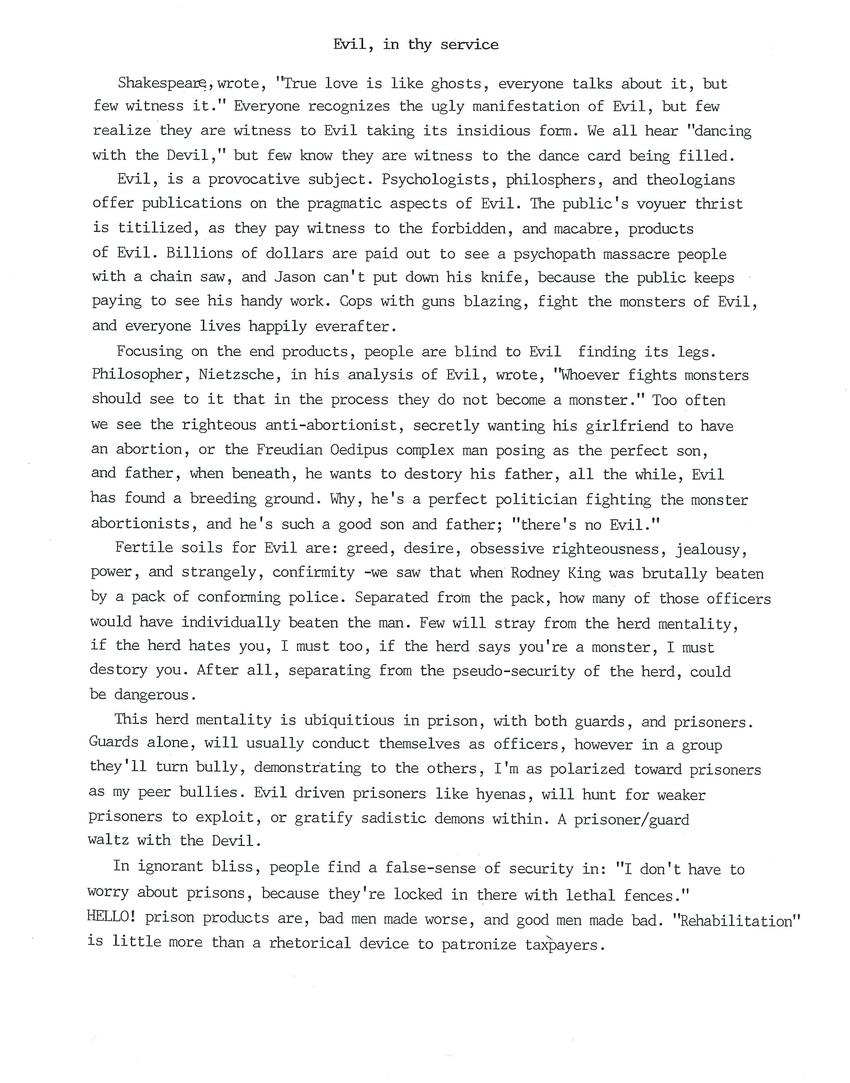 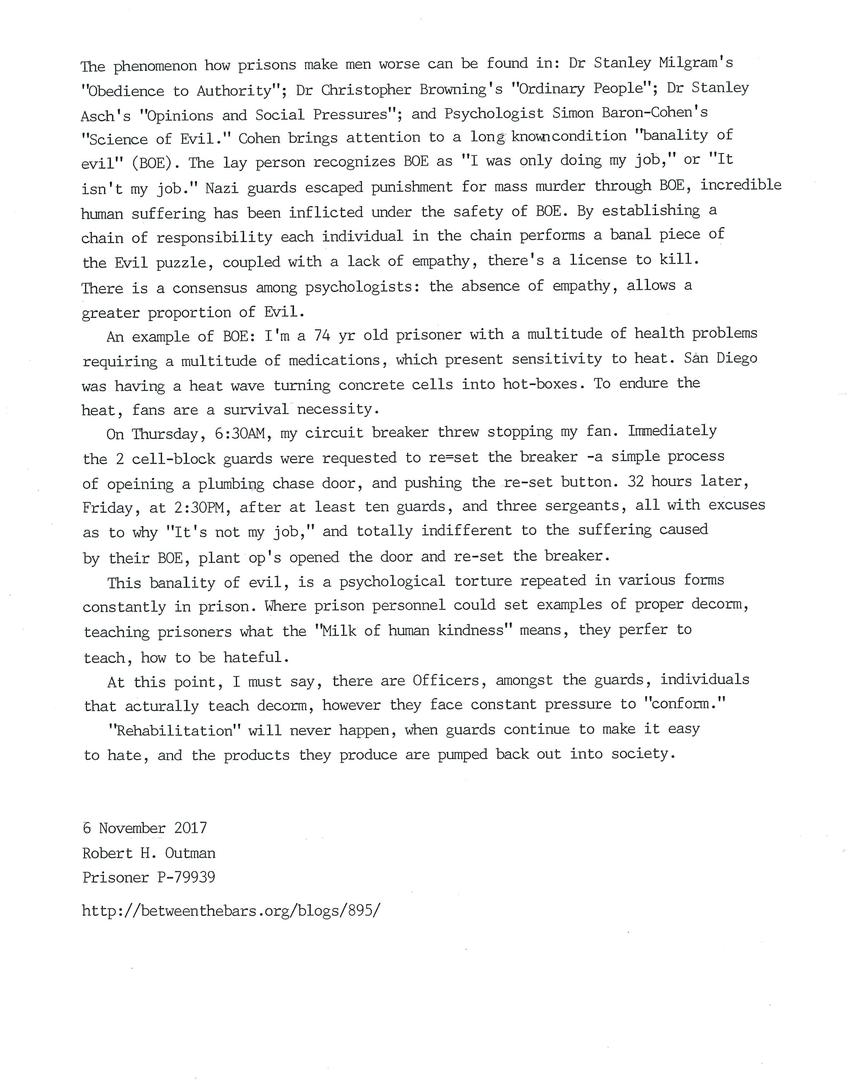 Shakespeare, wrote, "True love is like ghosts, everyone talks about it, but few witness it." Everyone recognizes the ugly manifestation of Evil, but few realize they are witness to Evil taking its insidious form. We all hear "dancing with the Devil," but few know they are witness to the dance card being filled. Evil, is a provocative subject. Psychologists, philosophers, and theologians offer publications on the pragmatic aspects of Evil. The public's voyeur thrust is tantalized, as they pay witness to the forbidden, and macabre people with a chain saw, and Jason can't put down his knife, because the public keeps paying to see his handy work. Cops with guns blazing, fight the monsters of Evil, and everyone lives happily ever after.
Focusing on the end products, people are blind to Evil finding its legs. Philosopher, Nietzsche, in his analysis of Evil, wrote, "Whoever fights monsters should see to it that in the process they do not become a monster." Too often we see the reighteous anti-abortionist, secretly wanting his girlfriend to have an abortion, or the Freudian Oedipus complex man posing as the the perfect son, and father, when beneath, he wants to destroy his father, all the while, Evil has found a breeding ground. Why, he's perfect politician fighting the monster abortionists, and he's such a good son and father; "there's no Evil."
Fertile soils for Evil are: greed, desire, obsessive righteousness, jealousy, power, and strangely, confirmity -we saw that when Rodney King was brutally beaten by a pack of conforming police. Separated from the pack, how many of those officers would have individually beaten the man. few will stray from the herd mentality, if the herd hates you, I must too, if the herd says you're a monster, I must destroy you. After all, separating from the pseudo-security of the herd, could be dangerous.
This herd mentality is ubiquitous in prison, with both guards, and prisoners. Guards alone, will usually conduct themselves as officers, however in a group they'll turn bully, demonstrating to the others, I'm as polarized toward prisoners as my peer bullies. Evil driven prisoners like hyenas, will hunt for weaker prisoners to exploit, or gratify sadistic demons within. A prisoner/guard waltz with the Devil.
In ignorant bliss, people find a false-sense of security in: "I don't have to worry about prisons, because they're locked in there with lethal fences." HELLO! prison products are, bad men made worse, and good men made bad. "Rehabilitation" is little more than rhetorical device to patronize taxpayers.
The phenomenon how prisons make men worse can be found in: Dr. Stanley Milgram's "Obedience to Authority"; Dr Christopher Browning's "Ordinary People"; Dr Stanley Asch's "Opinions and Social Pressures"; and Psychologist Simon Baron-Cohen's "Science of Evil." Cohen brings attention to a long known condition "banality of evil" (BOE). The lay person recognizes BOE as "I was only doing my job," or "It isn't my job." Nazi guards escaped punishment for mass murder through BOE, incredible human suffering has been inflicted under the safety of BOE. By establishing a chain of responsibility each individual in the chain performs a banal piece of the Evil puzzle, coupled with a lack of empathy, there's a license to kill. There is consensus among psychologists: the absence of empathy, allows a greater proportions of Evil.
An example of BOE: I'm a 74 year old prisoner with a multitude of health problems requiring a multitude of medications, which present sensitivity to heat. San Diego was having a heat, fans are a survival necessity.
On Thursday, 6:30AM, my circuit breaker threw stopping my fan, Immediately the 2 cell-block guards were requested to reset the breaker- a simple process of opening a plumbing chase door, and pushing the re-set button. 32 hours later, Friday, at 2:30PM, after at least ten guards, and three sergeants, all with excuses as to why "It's not my job," and totally indifferent to the suffering caused by their BOE, plant op's opened the door and re-set button.
This banality of evil, is a psychological torture repeated in various forms constantly in prison. Where prison personnel could set example of proper decorum, teaching prisoners what the "Milk of human kindness" means, they prefer to teach, how to be hateful.
At this point, I must say, there are Officers, amongst the guards, individuals that actually teach decorum, however they face a constant pressure to "conform." "Rehabilitation" will never happen, when guards continue to make it easy to hate, and the products they produce are pumped back out into society.

Jealousy was young,
still vaporous,
and love shuffled past the first corn ill at ease,
pricked itself on the first thorns,
didn't know what fright was yet
and bleeding.
In the distance lay the word: large, wrinkly and empty.
The laws of nature creaked, crunched,
got into their stride one by one.
Apples fell, leaves, stars.
Rivers flowed from the first mountains.
Cain raised his arm.
Everything started, everything was new,
everything was inescapable.

The Truth
You must, they said, face the truth.
Now! Immediately!
When it grew dark they whispered:
now you may face something else
if you like.
It was quiet
and I faced love
and thoughtlessness with its giant wings
and the simplicity of the moonlight on my wall.
Now the truth again, they said. Now!

A Man Wanted To Talk About Love
A man wanted to talk about love.
No! Not about love! everyone cried
and everyone departed or knocked him down,
and death peered through a window:
About love? Ridiculous!
That man put on a pair of wings
like those of a thrush,
but larger and more despairing,
and away he flew and sang about love
and love sang about him, murmured about him
never did a man go to bed more sorrowful
on the indifferent earth.

Dying?? Never heard of it!
But one evening, under a street lamp, I found a poem about dying.
It was rain-drenched and almost illegible,
but everything was in it.
I learnt it by heart and thought:
might there be just such a poem, such a rain-drenched, almost
illegible poem,
about love, with everything in it about love,
and should I learn that by heart too?

Dear Robert, just some poems by the Dutch poet Toon Tellegen. Hope I havent send them yet. The last one hits quite home right now for me.
You're last post on Between the bars is from NOV. 12, 2017, you knew that? Anyways, hope you are fine when receiving these words, warm greetings, Julia
(scanned reply – view as blog post)
uploaded July 26, 2019.  Original (PDF) 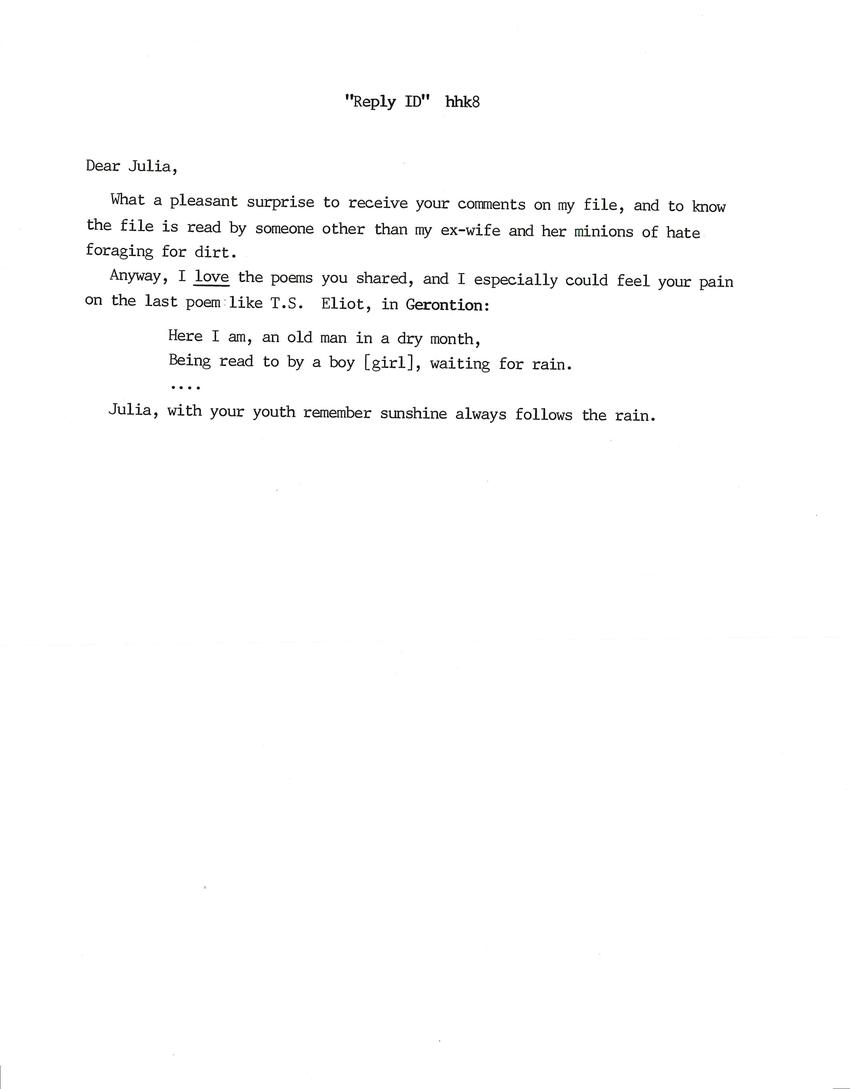 Dear Robert,
I am glad the sending of poems was a happy surprise. And I just found one by the same author the he made just for you:

WEATHER FORECAST - Poem by Toon Tellegen
Tomorrow we will see unsettled and unusual weather.
Instead of the sun rising at 05:24, a dog will rise,
a fiery red dog that will climb up through the sky,
wearing an iron chain round its neck,
and it will growl at the clouds
that will hastily make room for him.
At 13:37 he will be at the zenith and bark,
he'll bend forward and chase everyone inside
with his furious scowl.
‘The dog is shining! The dog is shining!' everyone will whisper,
but the dog won't shine, the dog will yank at his chain
and bare his teeth.
Late in the afternoon he will descend to the horizon and howl.
Everyone will emerge again,
sit down on their benches outside their houses and say:
‘O dog, why are you howling . . . '
People will want to pat him and console him
or give him something to eat.
But no one will be able to reach him
and everyone will close their eyes and let the howling
wash over them.
At 21:51 the dog will go down and never return.
The day after tomorrow the sun will shine again,
that big, round, dazzling thing that everyone knows,
the most ordinary thing in the whole cosmos,
that had already existed for billions of years before there was any mention
of a sky or a firmament,
and that does nothing but rise, set and shine.
It will be a pleasant day.
But should you wonder, the day after tomorrow, why you're so sad,
it will be because you miss the dog,
the dog that will appear in the sky tomorrow. 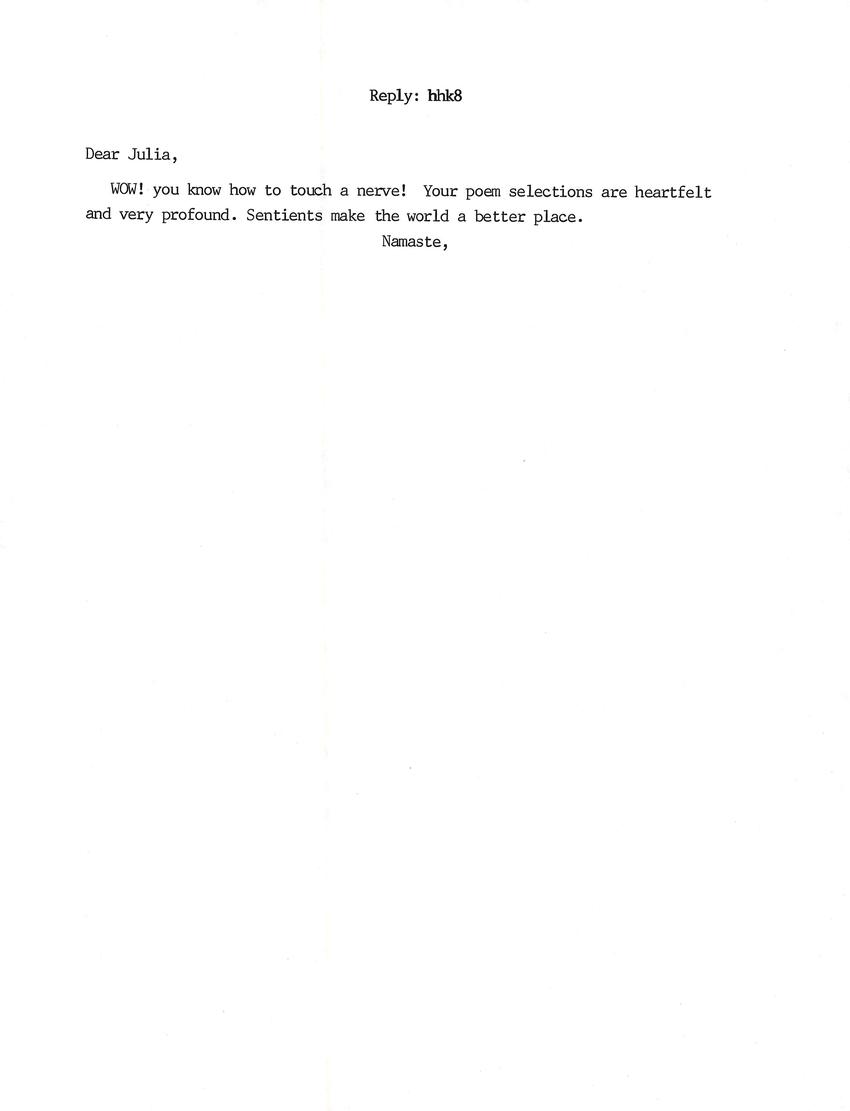 Dear Robert,
Sentients, another word for my ever expanding vocabulary, though I can only find the word as an adjective in the dictionary and not in plural at all. But otherwise I can only agree, they make the world a better place...
This time I have a story for you, same author, Toon Tellegen. He has written a lot of these stories. Here we go:

The sun was shining and the squirrel and the ant were sitting in the grass on the river-bank. Above them the willow rustled, in front of them the water burbled, and in the distance the thrush was singing.

The ant said nothing and chewed at a blade of grass.

‘I think,’ said the squirrel, ‘that I could never be happier than I am now.’

‘Yes,’ said the squirrel. ‘Then I should be even happier. But happier than that is impossible.’

‘Yes,’ said the squirrel. ‘You're right. Then I should be even happier...’

‘And if the cricket was throwing a really big party tonight, and if you suddenly got a letter from the whale with an invitation, and if today the sun didn't set any more, and if everything smelt of fresh beech-nuts...?’

The squirrel didn't answer. He looked at the sparkling water and thought: so actually I'm not really that happy after all...

He looked sideways at the ant. But the ant had his eyes shut, chewed at his blade of grass and let the sun shine on his face.

What am I then? the squirrel wondered. If I'm not very happy...

It was as if a cloud had come between him and the sun. He couldn't answer that question.

In the distance the thrush fell silent and the nightingale started to sing, just like that, in the middle of the day.

Hey, thought the squirrel, what's going on? He felt a stirring in his eyes. Tears? He wondered. Are those tears? He heaved a deep sigh, folded his tail behind his head and stared at the sky. I just won't think any more, he thought. But he knew that that was very difficult.

So they lay side by side on the river-bank, the ant and the squirrel.

‘How lovely it is just lying here relaxing, squirrel,’ said the ant a long time later.

The squirrel said nothing.

‘I've never been so lovely and relaxed before,’ said the ant.

I wish, thought the squirrel, that just once I could be sitting on a branch with my legs crossed with the ant down below shouting up: you're right, squirrel, I admit it, you're absolutely right...

The sun slipped slowly down the sky, the river burbled and in the distance the blackbird sang. The squirrel just looked and just listened and didn't think about anything any more. 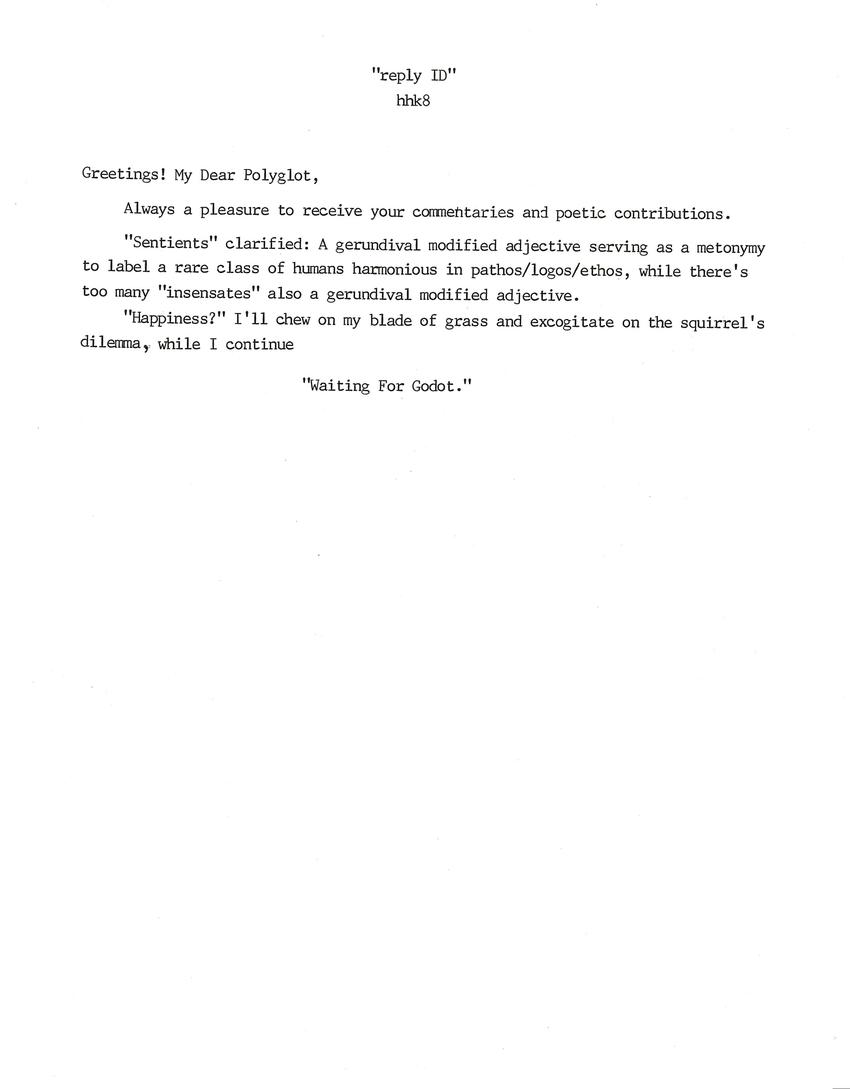