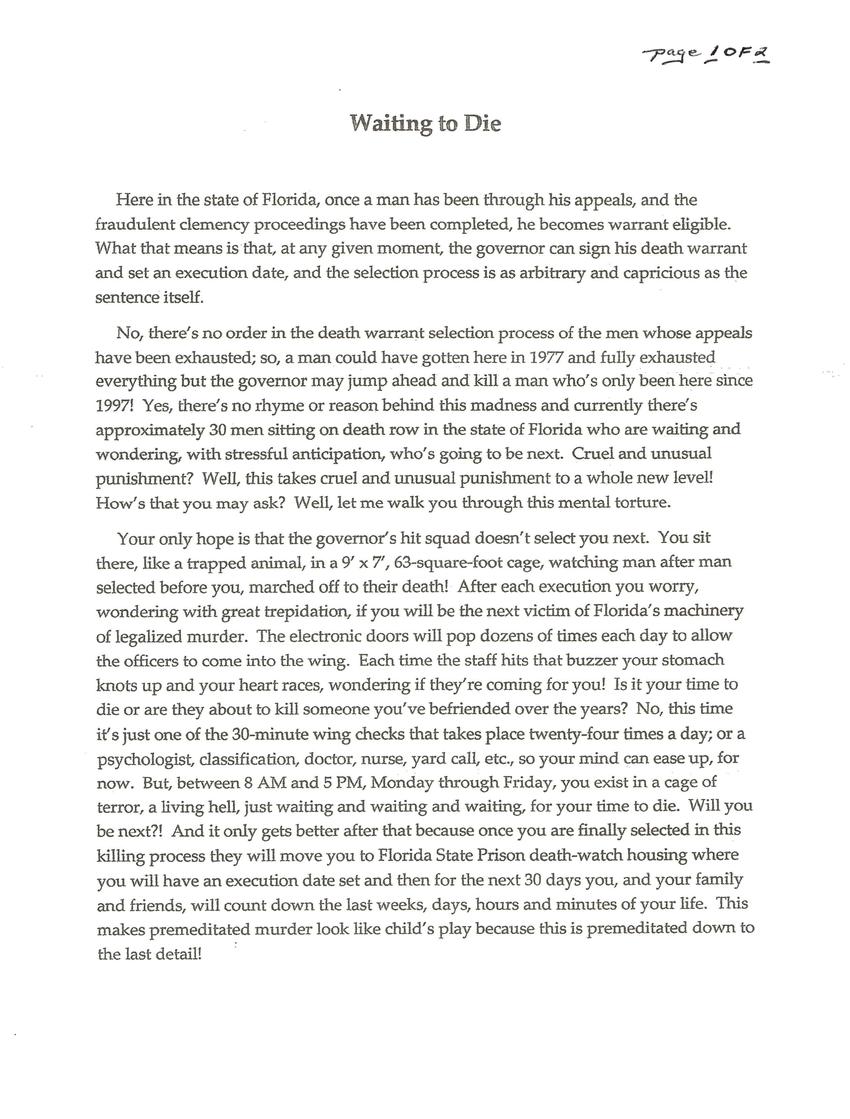 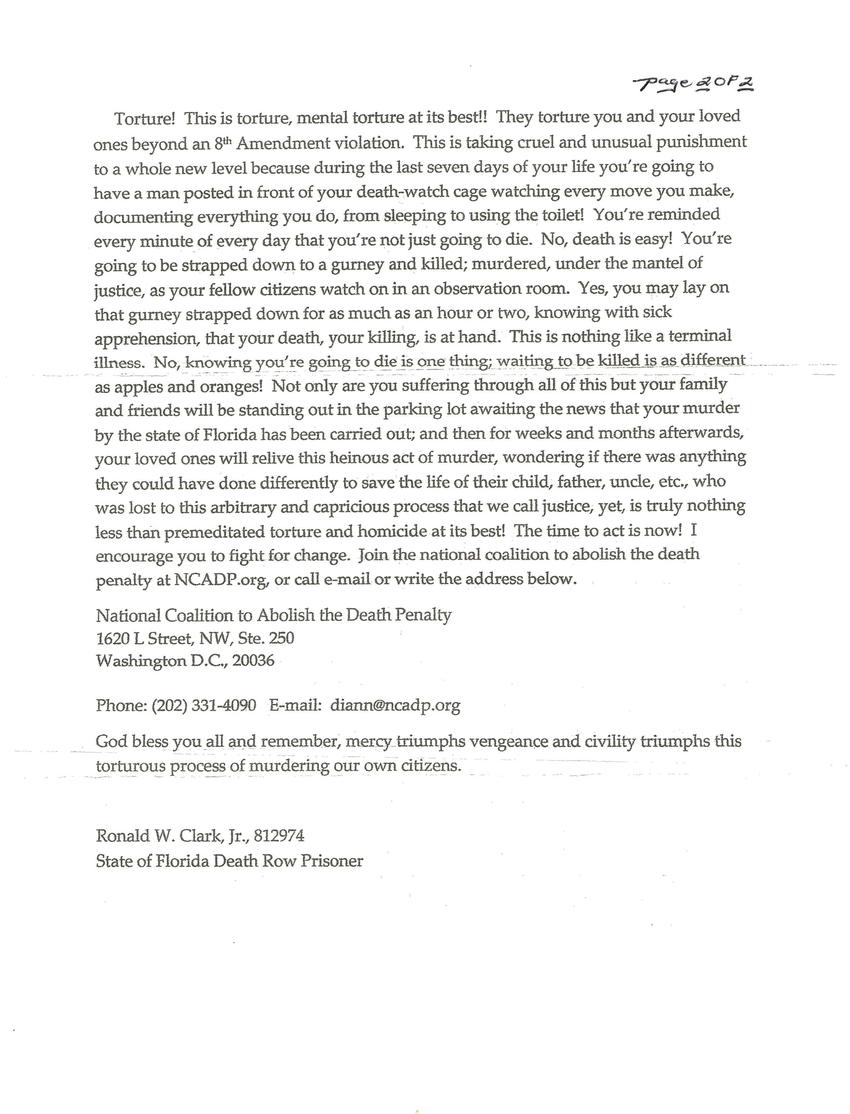 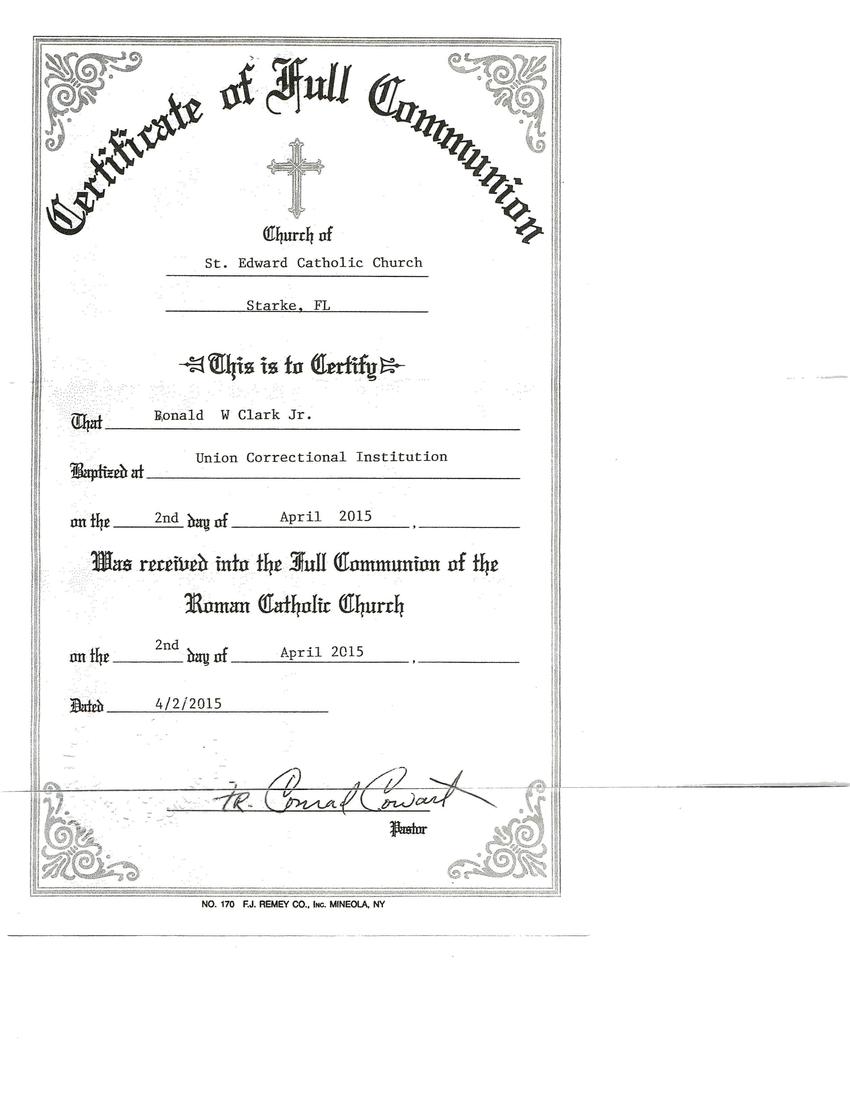 Here in the state of Florida, once a man has been through his appeals, and the fraudulent clemency proceedings have been completed, he becomes warrant eligible. What that means is that, at any given moment, the governor can sign his death warrant and set an execution date, and the selection process is as arbitrary and capricious as the sentence itself.

No, there's no order in the death warrant selection process of the men whose appeals have been exhausted; so, a man could have gotten here in 1977 and fully exhausted everything but the governor may jump ahead and kill a man who's been here since 1997! Yes, there's no rhyme or reason behind this madness and currently there's approximately 30 men sitting on death row in the state of Florida who are waiting and wondering, with stressful anticipation, who's going to be next. Cruel and unusual punishment? Well, this takes cruel and unusual punishment to a whole new level! How's that you may ask? Well, let me walk you through this mental torture.

Your only hope is that the governor's hit squad doesn't select you next. You sit there, like a trapped animal, in a 9' x 7', 63-square-foot cage, watching man after man selected before you, marched off to their death! After each execution you worry, wondering with great trepidation, if you will be the next victim of Florida's machinery of legalized murder. The electronic doors will pop dozens of times each day to allow the officers to come into the wing. Each time the staff hits that buzzer your stomach knots up and your heart races, wondering if they're coming for you! Is it you time to die or are they about to kill someone you've befriended over the years? No, this time it's just one of the 30-minute wing checks that takes place twenty-four times a day; or a psychologist, classification, doctor, nurse, yard call, etc., so your mind can ease up, for now. But, between 8 AM and 5 PM, Monday through Friday, you exist in a cage of terror, a living hell, just waiting and waiting and waiting, for your time to die. Will you be next?! And it only gets better after that because once you are finally selected in this killing process they will move you to Florida State Prison death-watch housing where you will have an execution date set and then for the next 30 days you, and your family and friends, will count down the last weeks, days, hours and minutes of your life. This makes premeditated murder look like child's play because this is premeditated down to the last detail!

Torture! This is torture, mental torture at its best!! They torture you and your loved ones beyond an 8th Amendment violation. This is taking cruel and unusual punishment to a whole new level because during the last seven days of your life you're going to have a man posted in front of your death-watch cage watching every move you make, documenting everything you do, from sleeping to using the toilet! You're reminded every minute of every day that you're not just going to die. No, death is easy! You're going to be strapped down to a gurney and killed; murdered, under the mantel of justice, as your fellow citizens watch on in an observation room. Yes, you may lay on that gurney strapped down for as much as an hour or two, knowing with sick apprehension, that your death, your killing, is at hand. This is nothing like a terminal illness. No, knowing you're going to die is one thing; waiting to be killed is as different as apples and oranges! Not only are you suffering through all of this but your family and friends will be standing out in the parking lot awaiting the news that your murder by the state of Florida has been carried out; and then for weeks and months afterwards, your loved ones will relive this heinous act of murder, wondering if there was anything they could have done differently to save the life of their child, father, uncle, etc., who was lost to this arbitrary and capricious process that we call justice, yet, is truly nothing less than premeditated torture and homicide at its best! The time to act is now! I encourage you to fight for change. Join the national coalition to abolish the death penalty at NCADP.org, or call e-mail or write the address below.

God bless you all and remember, mercy triumphs vengeance and civility triumphs this torturous process of murdering our own citizens.