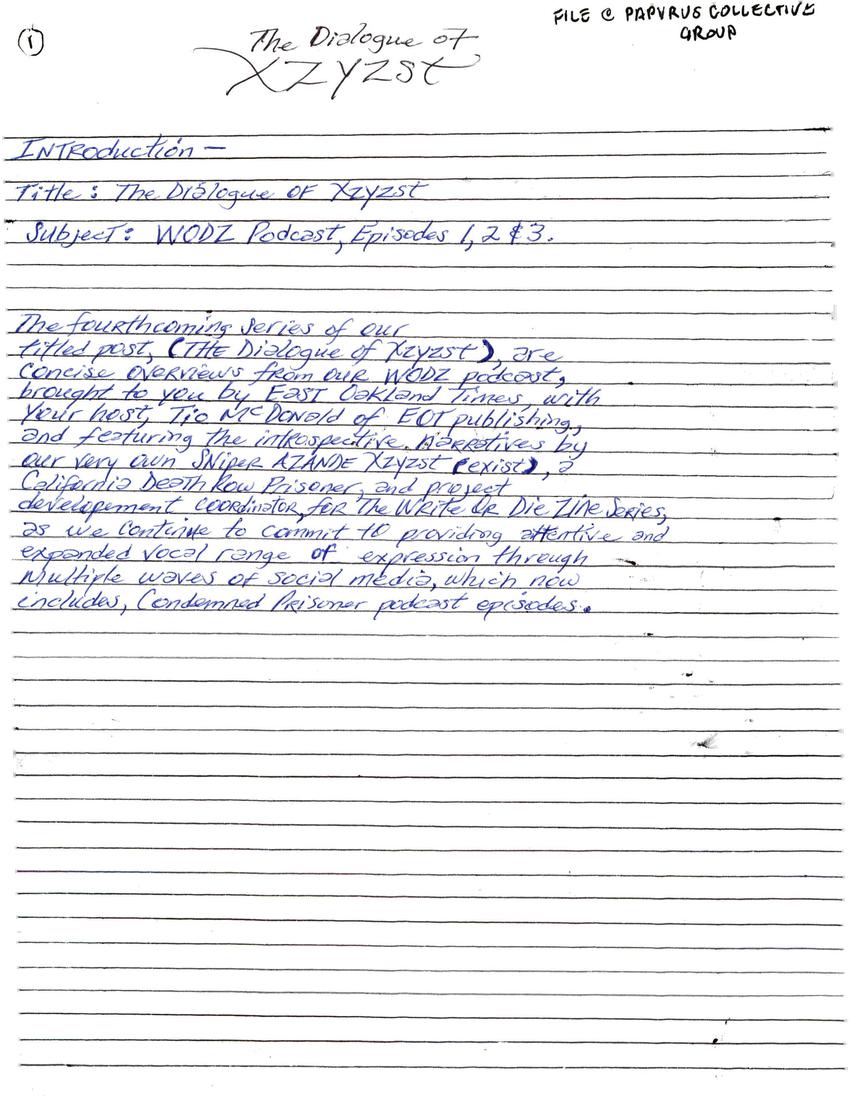 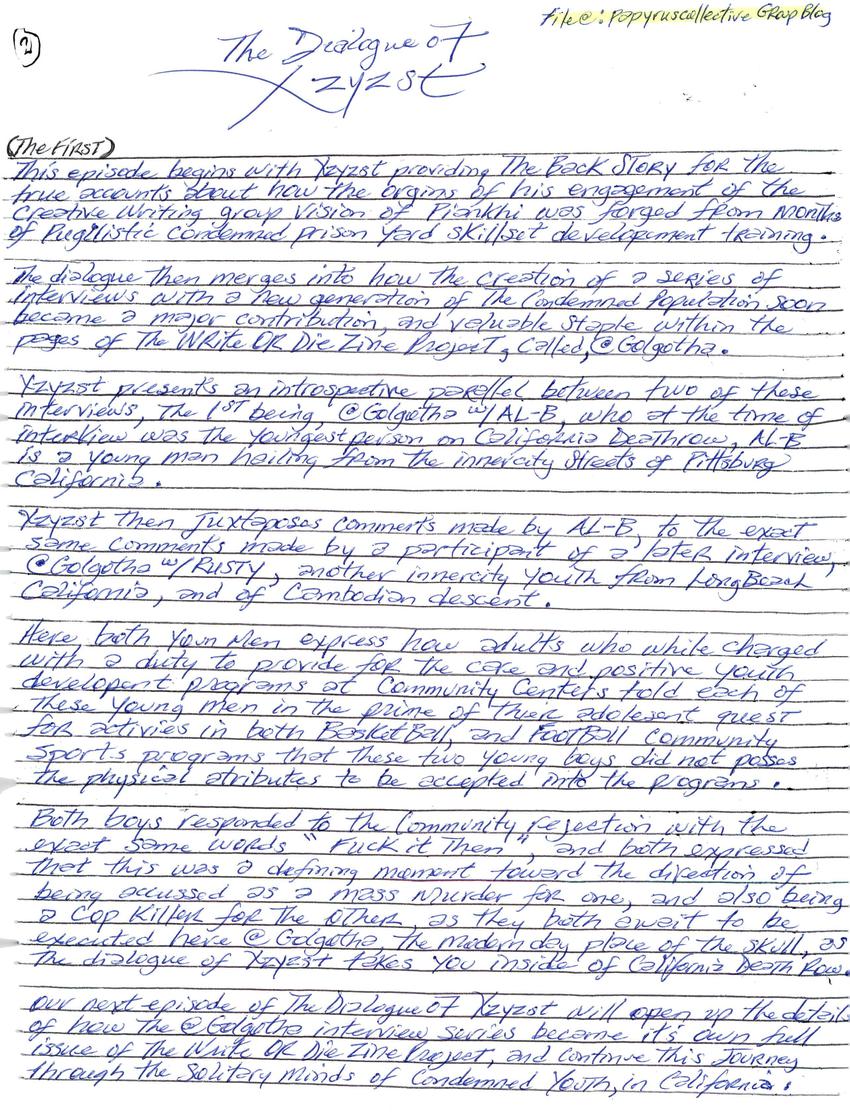 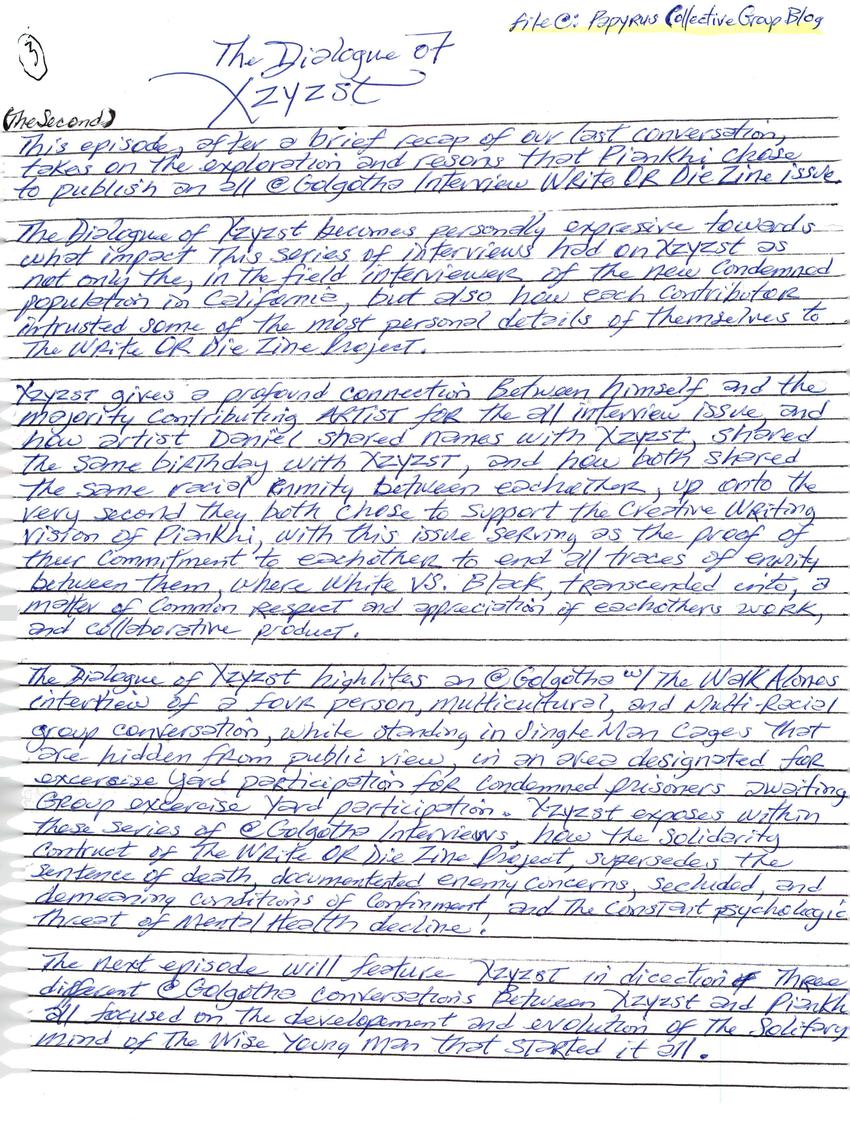 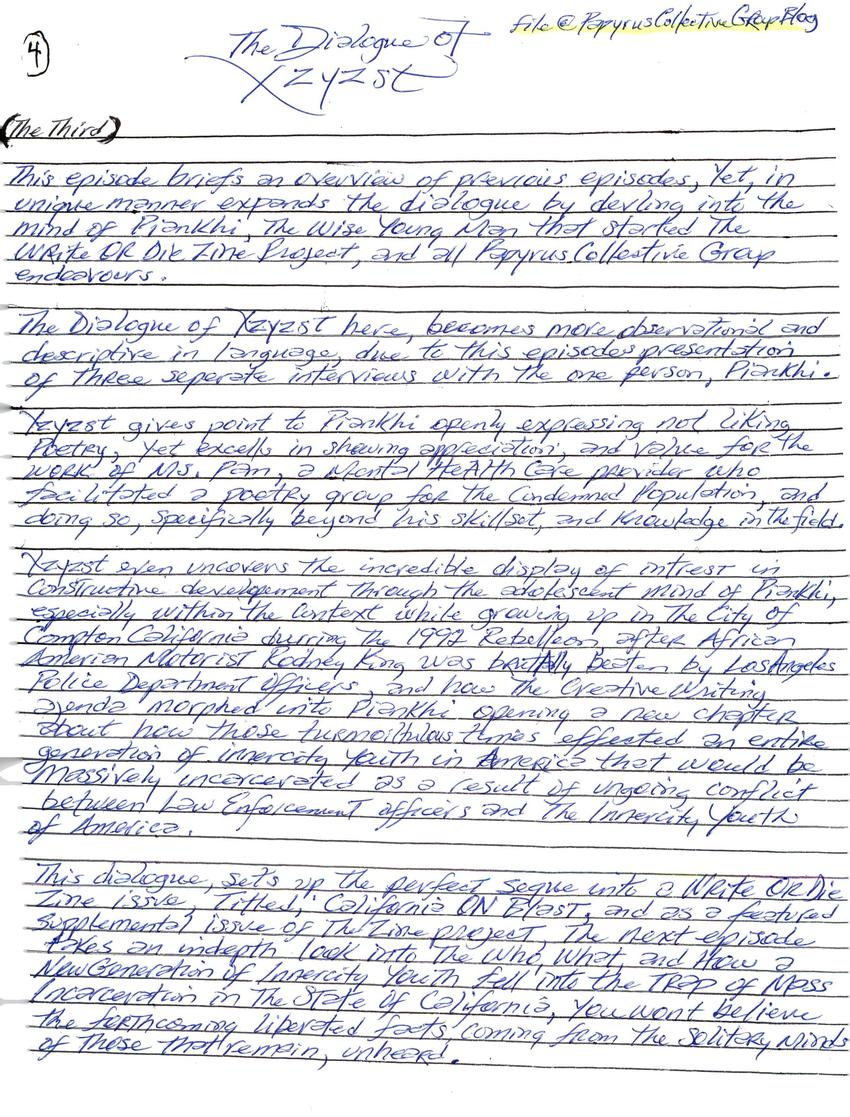 Title: The Dialogue of Xzyzst

The fourthcoming serious of our titled post, (The Dialogue of Xzyzst), are concise overviews from our WODZ podcast, brought to you by East Oakland Times, with your host, Tio McDonald of EOT publishing, and featuring the introspective narratives by our very own Sniper Azande Xzyzst (exist), a California Death Row Prisoner, and project development coordinator, for the Write or Die Zine Series, as we continue to commit to providing attentive and expanded vocal range of expression through multiple waves of social media, which now includes, Condemned Prisoner podcast episodes.

This episode begins with Xzyzst providing The Back Story for the true accounts about how the origins of his engagement of the creative writing group vision of Piankhi was forged from months of Pugilistic condemned prison yard skillset development training.

The dialogue then merges into how the creation of a series of interviews with a new generation of the condemned population soon became a major contribution, and a valuable staple within the pages of the Write of Die Zine Project, called, @Golgatha.

Xzyzst presents an introspective parallel between two of these interviews, the 1st being, @Golgotha w/ AL-B, who at the time of interview was the youngest person on California Deathrow, AL-B is a young man hailing from the innercity streets of Pittsburg, California.

Xzyzst then juxtaposes comments made by AL-B, to the exact same comments made by a participant of a later interiew, @Golgotha w/ Rusty, another innercity youth from Long Beach, California, and of Cambodian descent.

Here, both young ment express how adults who while charged with a duty to provide for the care and positive youth development programs at community centers told each of these young men in the prime of their adolescent quest for activities in both basketball, and football community sports programs that these two young boys did not possess physical attributes to be accepted into the programs.

Both boys responded to the community rejection with the exact same words "Fuck it then", and both expressed that this was a defining moment toward the direction of being accussed as a mass murder for one, and also being a cop killer for the other, as they both await to be executed here @Golgotha, the modern day place of the skull, as the dialogue of Xzyzst takes you inside of California Death Row.

Our next episode of The Dialogue of Xzyzst will open up the details of how the @Golgotha interview series became its own full issue of The Write or Die Zine Project, and continue this journey through the solitary minds of condemned youth, in California.

This episode, after a brief recap of our last conversation, takes on the exploration and reasons that Piankhi chose to publish an all @Golgotha interview Write or Die Zine issue.

The Dialogue of Xzyzst becomes personally expressive towards what impact this series of interviews had on Xzyzst as not only the, in the field interviewer of the new condemned population of California, but also how each contributor intrusted some of the most person details of themselves to The Write or Die Zine Project.

Xzyzst gives a profound connection between himself and the majority contributing artist for the all interview issue, and how artist Daniel shared names with Xzyzst, shared the same birthday with Xzyzst, and how both shared the same racial enmity between each other, up onto the very second they chose to support the creative writing vision of Piankhi, with this issue serving as the proof of their commitment to each other to end all traces of enmity between them, where white vs. black, transcended into, a matter of common respect and appreciation of each others work, and collaborative product.

The Dialogue of Xzyzst highlites an @Golgotha w/ the Walk Alones interview of a four person, multicultural, and multi-racial group conversation, while standing in single man cages that are hidden from public view, in an area designated for exercise yard participation for condemned prisoners awaiting group exercise yard participation. Xzyzst exposes within the series of @Golgotha interviews, how the solidarity contruct of The Write or Die Zine Project, supersedes the sentence of death, documented enemy concerns, secluded, and demeaning conditions for confinement and the constant psychologic threat of mental decline!

The next episode will feature Xzyzst in disection of three different @Golgotha conversations between Xzyzst and Piankhi all focuded on the development and evolution of the solitary mind of the wise young man that started it all.

This episode briefs n overview of previous episodes, yet, in unique manner expands the dialogue by delving into the mind of Piankhi, the wise young man that started the Write or Die Zine Project, and all Papyrus Collective Group endeavors.

The Dialogue of Xzyzst here, becomes more observational and descriptive in language, due to this episodes presentation of three separate interviews with the one person, Piankhi.

Xzyzst gives point to Piankhi openly expressing not liking poetry, yet excels in showing appreciation, and value for the work of Ms. Pam, a mental health care provider who facilitated a poetry group for the condemned population, and doing so, specifically beyond his skillset, and knowledge in the field.

Xzyzst even uncovers the incredible display of interest in constructive development through the adolescent mind of Piankhi, especially within the context while growing up in the City of Compton, California during the 1992 Rebellion after African American motorist Rodney King was brutally beaten by Los Angeles Police Department Officers, and how the creative writing agenda morphed into Piankhi opening a new chapter about how those tumultuous times affected an entire generation of innercity youth in America that would be massively incarcerated as a result of ongoing conflict between law enforcement officers and the innercity youth of America.

This dialogue, sets up the perfect segue into a Write or Die Zine issue, titled, "California on Blast," as as a featured supplemental issue of the Zine project. The next episode takes an in depth look into the who, what, and how a new generation of innercity youth fell into the trap of mass incarceration in the State of California. You won't believe the forthcoming liberated facts coming from the solitary minds of those that remain, unheard.