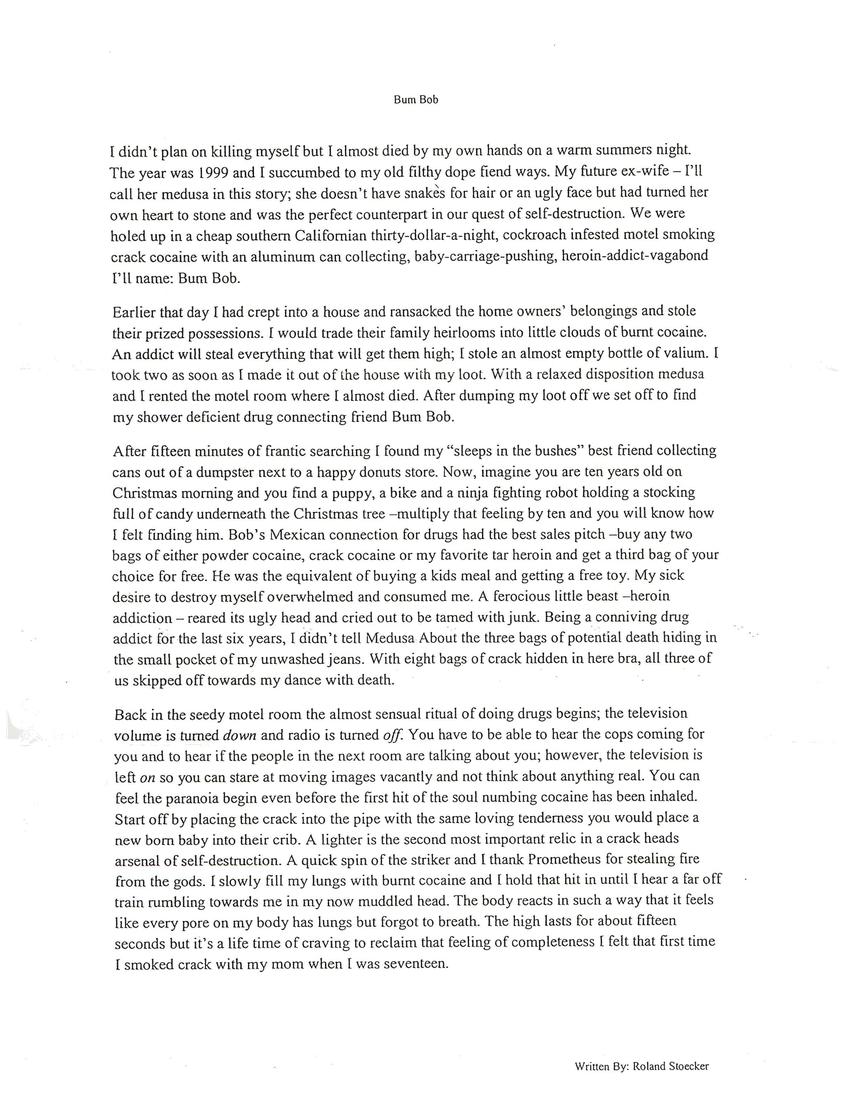 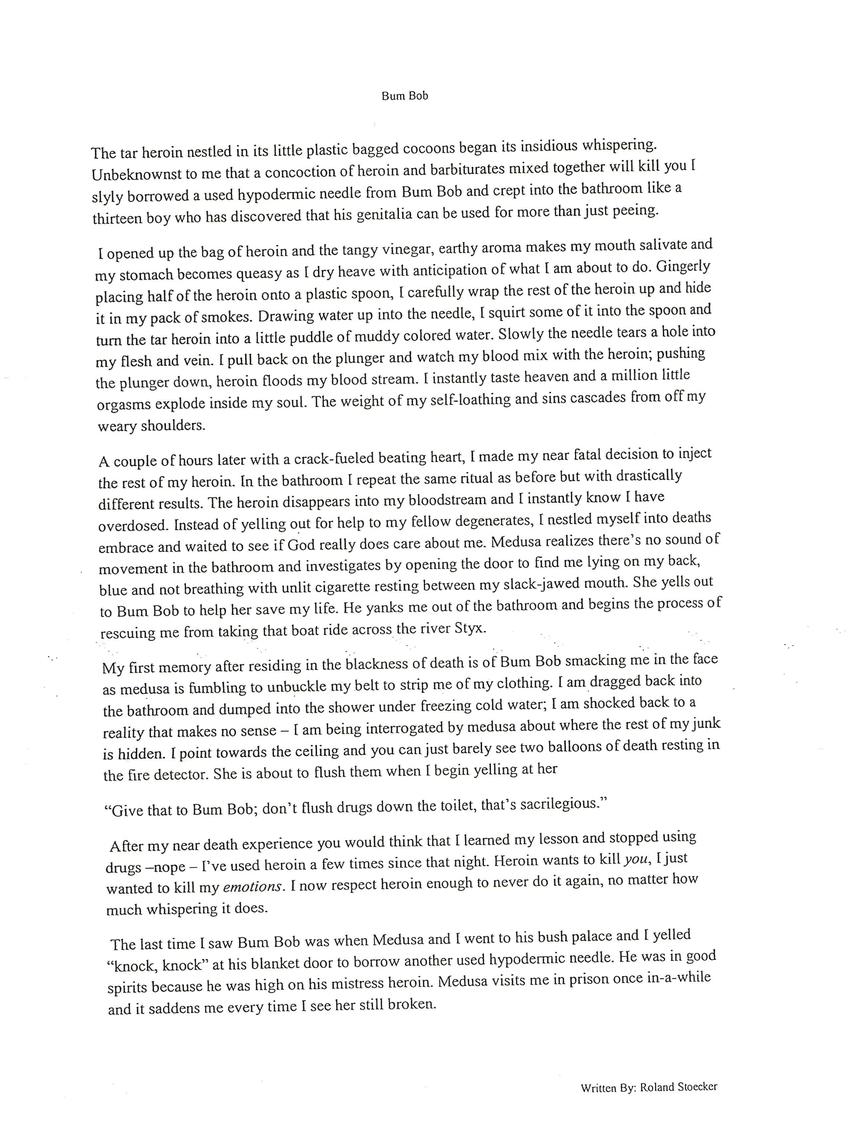 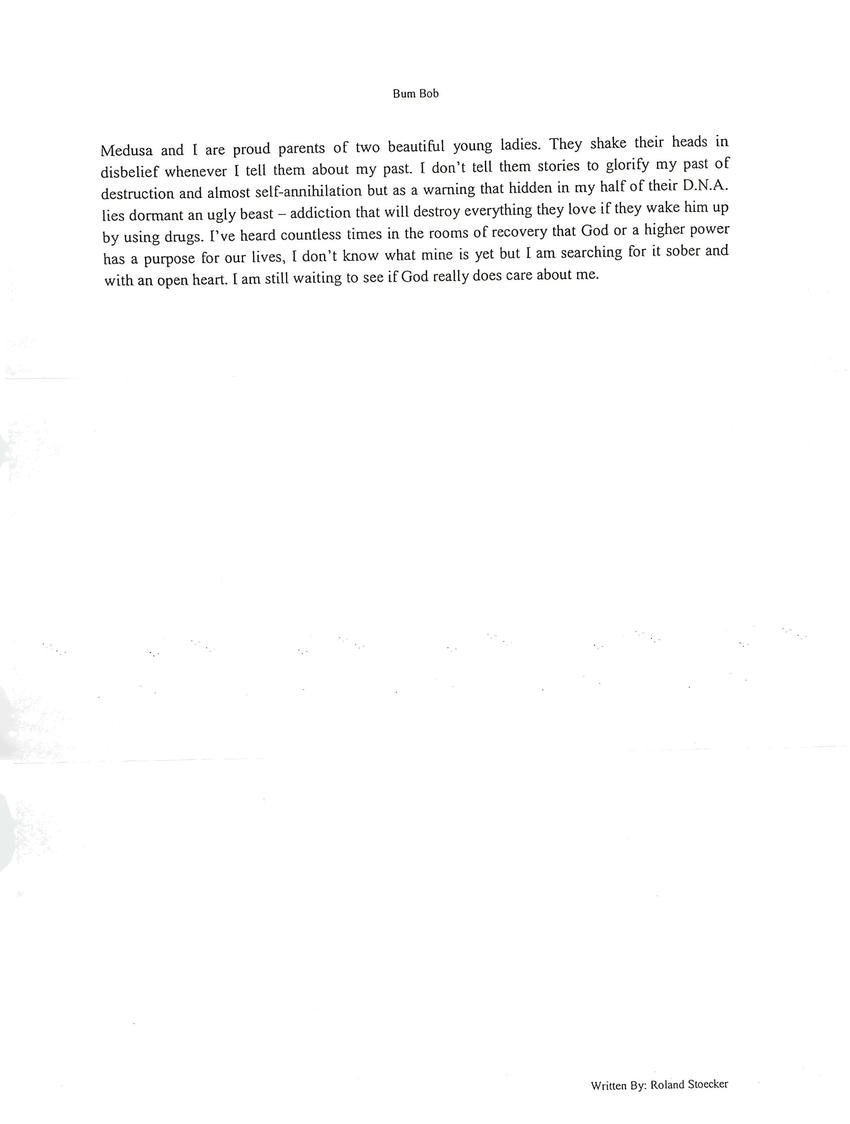 I didn't plan on killing myself, but I almost died by my own hands on a warm summers night.

The year was 1999, and I succumbed to my old filthy dope fiend ways. My future ex-wife—I'll call her Medusa in this story; she doesn't have snakes for hair or an ugly face but had turned her own heart to stone and was the perfect counterpart in our quest of self-destruction. We were holed up in a cheap southern California thirty-dollar-a-night, cockroach infested motel smoking crack cocaine with an aluminum-can-collecting, baby-carriage-pushing, heroin-addict vagabond who I'll name Bum Bob.

Earlier that day, I had crept into a house and ransacked the homeowners' belongings and stole their prized possessions. I would trade their family heirlooms into little clouds of burnt cocaine. An addict will steal anything that will get them high. I stole an almost empty bottle of Valium. I took two as soon as I made it out of the house with my loot.

With a relaxed disposition, Medusa and I rented the motel room where I almost died. After dumping my loot, we set off to find my shower deficient drug connecting friend, Bum Bob. After fifteen minutes of frantic searching, I found my "sleeps in the bushes" best friend collecting cans out of a dumpster next to a Happy Donuts store.

Now imagine you are ten years old on Christmas morning and you find a puppy, a bike, a ninja-fighting robot holding a stocking full of candy underneath the Christmas tree. Multiply that feeling by ten, and you will know how I felt finding him.

Bob's Mexican connection for drugs had the best sales pitch: buy any two bags of either powder cocaine, crack cocaine, or my favorite tar heroin and get a third bag of your choice for free. He was the equivalent of buying a kids' meal and getting a free toy. My sick desire to destroy myself overwhelmed and consumed me. A ferocious little beast—heroin addiction—reared its ugly head and cried out to be tamed with junk. Being a conniving drug addict for the last six years, I didn't tell Medusa about the three bags of potential death hiding in the small pocket of my unwashed jeans. With eight bags of crack cocaine hidden in her bra, all three of skipped off towards my dance with death.

Back in the seedy motel room, the almost sensual ritual of doing drugs begins. The television volume is turned down and the radio is turned off. You have to be able to hear the cops coming for you and to hear if the people in the next room are talking about you. However, the television is left on so you can stare at moving images vacantly and not think about anything real. You can feel the paranoia begin even before the first hit of the soul-numbing cocaine has been inhaled.

Start off by placing the crack into the pipe with the same loving tenderness you would place a newborn baby into their crib. A lighter is the second most important relic in a crack head's arsenal of self-destruction. A quick spin of the striker, and I thank Prometheus for stealing fire from the gods. I slowly fill my lungs with burnt cocaine and I hold that hit in until I hear a far off train rumbling towards me in my now muddled head. The body reacts in such a way that it feels like every pore on my body has lungs but forgot to breathe. The high lasts for about fifteen seconds, but it's a lifetime of craving to reclaim that feeling of completeness I felt that first time I smoked crack with my mom when I was seventeen.

The tar heroin nestled in its little plastic bagged cocoons began its insidious whispering. Unbeknown to me that a concoction of heroin and barbiturates will kill you, I slyly borrowed a used hypodermic needle from Bum Bob and crept into the bathroom like a thirteen-year-old boy who has discovered that his genitalia can be used for more than just peeing.

I opened up the bag of heroin and the tangy vinegar. Earthy aroma makes me salivate and my stomach becomes queasy as I dry heave with anticipation of what I am about to do. Gingerly placing half of the heroin onto a plastic spoon, I carefully wrap up the rest of the heroin and hide it in my pack of smokes. Drawing water up into the needle, I squirt some of it into the spoon and turn the tar heroin into a little puddle of muddy colored water. Slowly, the needle tears a hole into my flesh and vein. I pull back on the plunger and watch my blood mix with the heroin. Pushing the plunger down, heroin floods my bloodstream. I instantly taste heaven and a million little orgasms explode inside my soul. The weight of my self-loathing and sins cascade from my weary shoulders.

A couple of hours later, with a crack-fueled beating heart, I made my near fatal decision to inject the rest of my heroin. In the bathroom, I repeat the same ritual as before with drastically different results. The heroin disappears into my bloodstream and I instantly know I have overdosed.

Instead of yelling for help to my fellow degenerates, I nestle myself into death's embrace and wait to see if God really does care about me. Medusa realizes there's no sound of movement in the bathroom and investigates by opening the door to find me lying on my back, blue and not breathing, with an unlit cigarette resting between my slack-jawed mouth. She yells out to Bum Bob to help her save my life. He yanks me out of the bathroom and begins the process of rescuing me from the River Styx.

My first memory after residing in the blackness of death is of Bum Bob smacking me in the face while Medusa fumbles with my belt to remove my clothing. I am dragged back into the bathroom and dumped into the shower under freezing cold water. I am shocked back to a reality that makes no sense. I am being interrogated by Medusa about where the rest of my junk is hidden. I point towards the ceiling, and you can just barely see two balloons of death resting in the fire detector. She is about to flush them when I begin yelling at her,

"Give that to Bum Bob. Don't flush drugs down the toilet. That's sacrilegious."

After my near death experience, you would think that I learned my lesson and stopped using drugs. Nope. I've used heroin a few times since that night. Heroin wants to kill you. I just wanted to kill my emotions. I now respect heroin enough to never do it again, no matter how much whispering it does.

The last time I saw Bum Bob was when Medusa and I went to his bush palace and I yelled, "Knock, knock!" at his blanket door to borrow another used hypodermic needle. He was in good spirits because he was high on his mistress heroin. Medusa visits me in prison once in a while, and it saddens me every time I see her still broken.

Medusa and I are proud parents of two beautiful young ladies. They shake their heads in disbelief whenever I tell them about my past. I don't tell them stories to glorify my past of destruction and almost self-annihilation, but as a warning. That hidden in my half of their DNA is an ugly beast. Addiction will destroy everything they love if they wake him up by using drugs.

I've heard countless times in the rooms of recovery that God or a higher power has a purpose for our lives. I don't know mine yet, but I am searching for it sober and with an open heart. I am still waiting to see if God really does care about me.

Beautifully written. You’re a poet. I pray that God will reveal himself to you stranger.
I remember that night you scared the holy hell out of me and I instantly realized how far your addictions had you and you were gonna be lost from me one day.