Letter To The Media 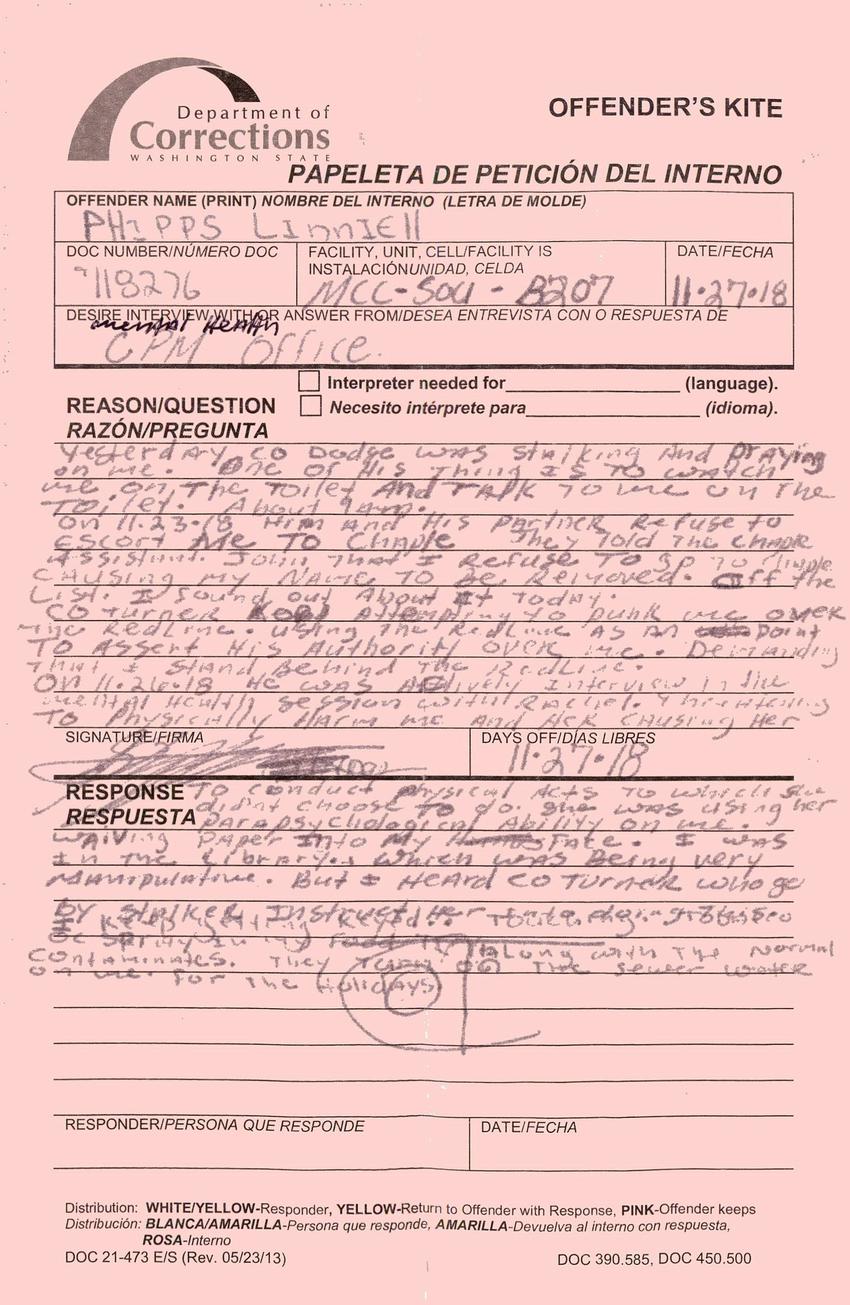 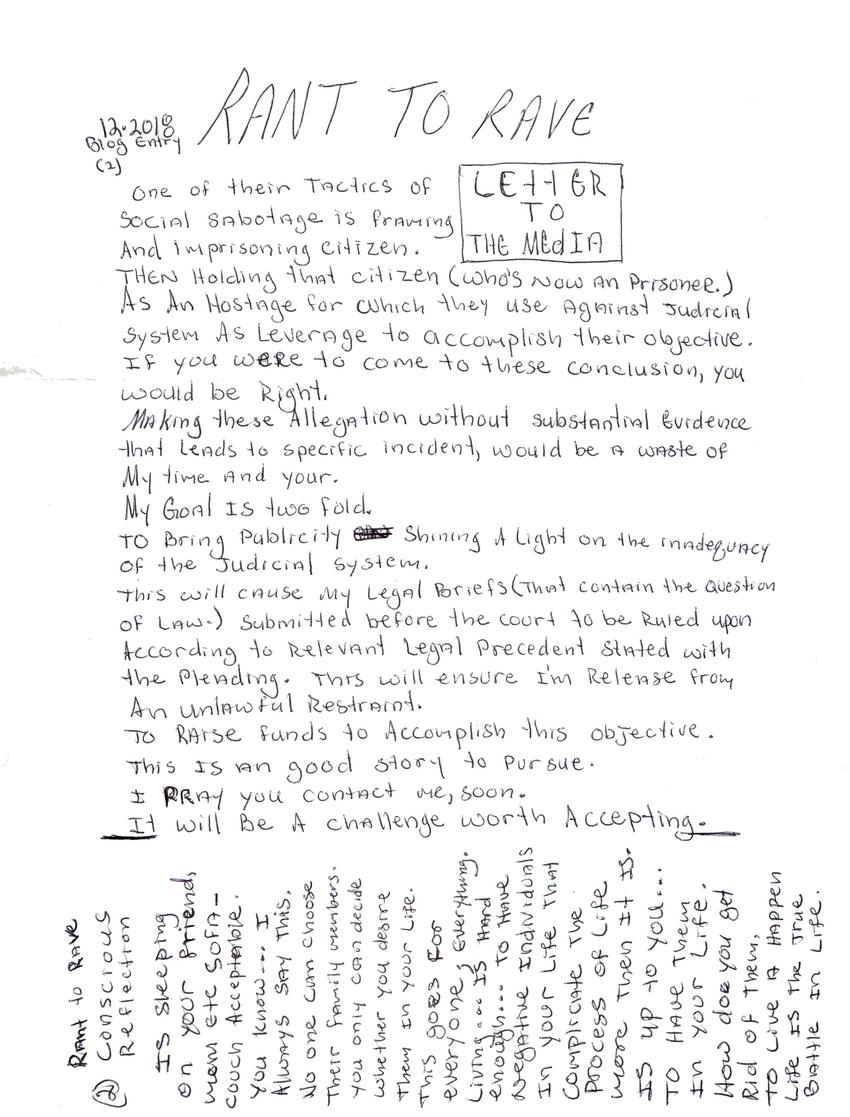 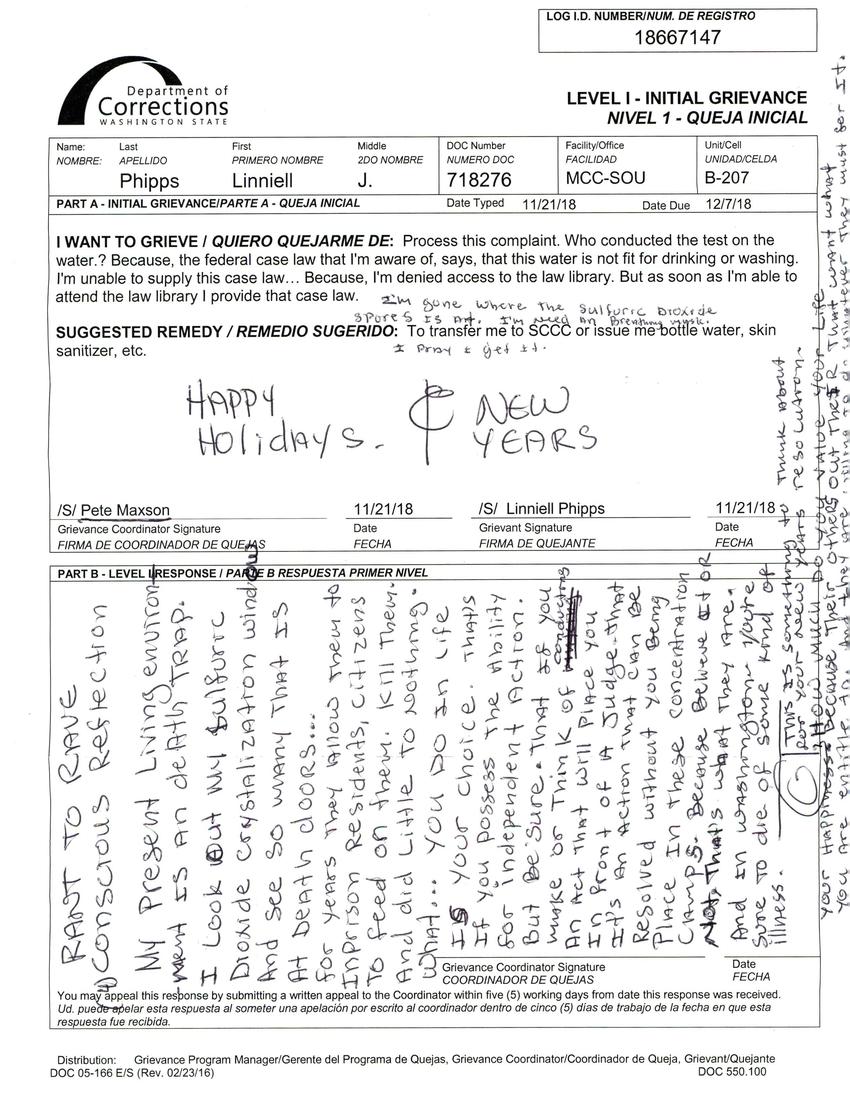 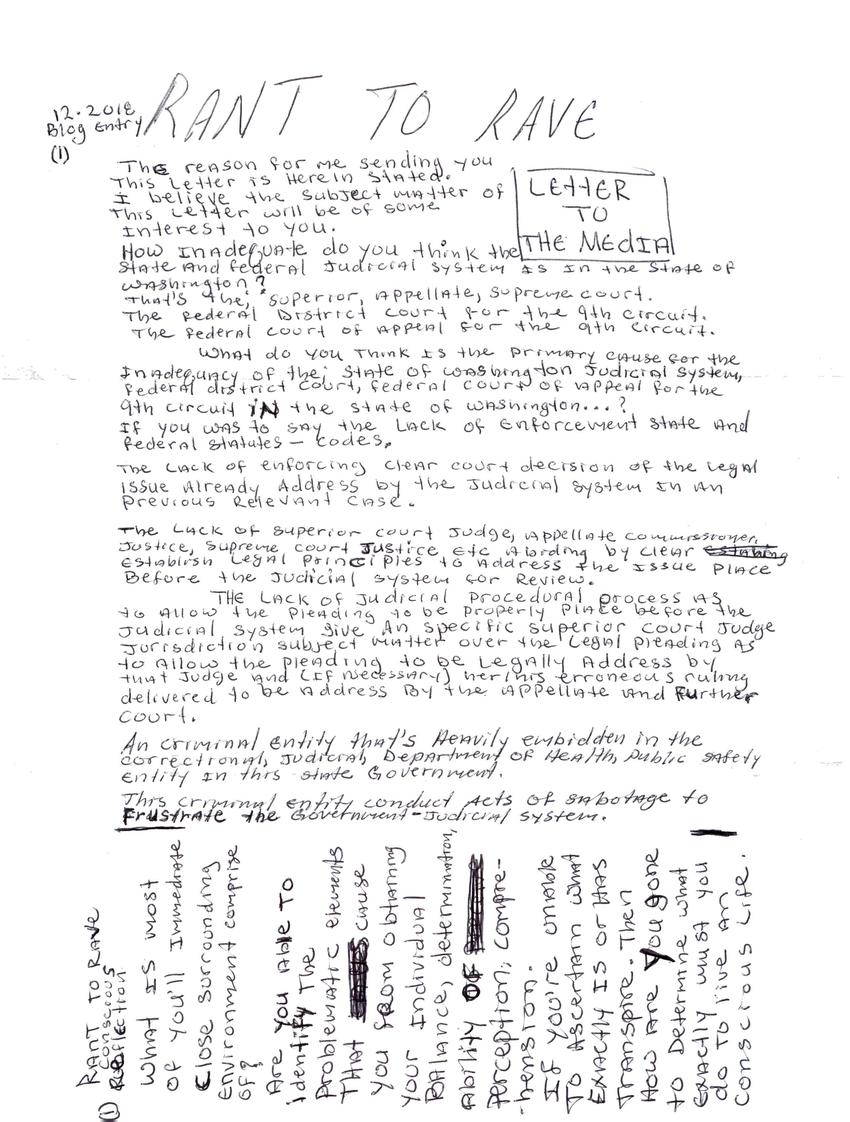 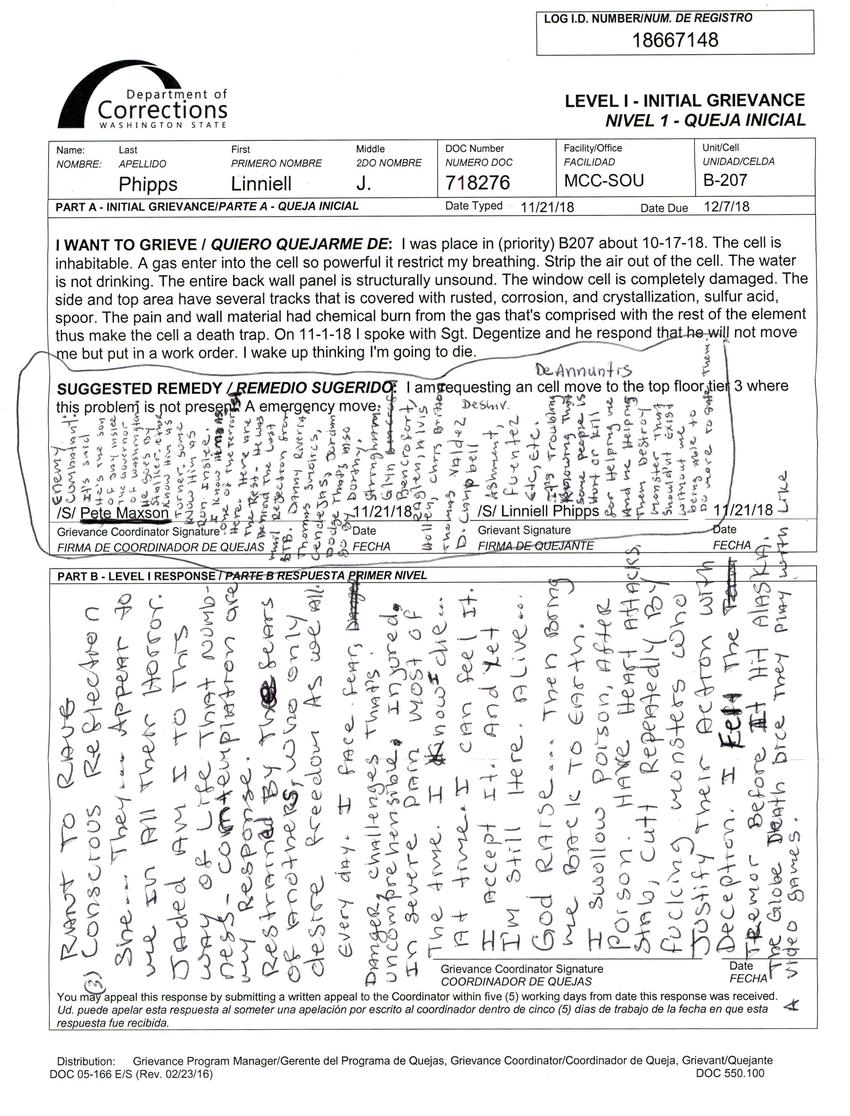 DESIRE INTERVIEW WITH OR ANSWER FROM
Mental Health CPM Office

Yesterday CO Dodge was stalking and preying on me. One of his thing is to watch me on the toilet and talk to me on the toilet. About 9am on 11.23.18 him and his partner refuse to escort me to chapel. They told the chapel assistant John that I refuse to go to chapel, causing my name to be removed off the list. I found out about it today.

CO Turner kept attempting to punk me over the red line. Using the red line as a point to assert his authority over me. Demanding that I stand behind the red line. On 11.26.18 he was actively interview in the mental health session with Rachel + threatening to physically harm me and her, causing her to conduct physical acts to which she didn't choose to do. She was using her parapsychological ability on me. Waving paper into my face. I was in the library, which was being very manipulative. But I heard CO Turner who go by Stalker, instruct her into doing this. I keep getting keyed... touching, [illegible]. OC Spivy in my food contaminates. They turn on the sewer water on me for the holidays.

Letter to the Media

One of their tactics of social sabotage is framing and imprisoning citizen. Then holding that citizen (who's now a prisoner) as a hostage for which they use against judicial system as leverage to accomplish their objective. If you were to come to these conclusion, you would be right.

Making these allegation without substantial evidence that leads to specific incident, would be a waste of my time and your.

My goal is two fold.

To bring publicity shining a light on the inadequacy of the judicial system.

This will cause my legal briefs (that contain the question of law) submitted before the court to be ruled upon according to relevant legal precedent stated with the pleading. This will ensure I'm release from an unlawful restraint.

To raise funds to accomplish this objective. This is a good story to pursue.

It will be a challenge worth accepting.

Is sleeping on your friend's mom etc sofa/couch acceptable. You know... I always say this. No one can choose their family members. You only can decide whether you desire them in your life. This goes for everyone, everything. Living... is hard enough... to have negative individuals in your life that complicate the process of life more than it is. Is up to you... to have them in your life. How do you get rid of them? To live a happen life is the true battle in life.

I WANT TO GRIEVE/QUIERO QUEJARME DE: Process this complaint. Who conducted the test on the water? Because, the federal case law that I'm aware of, says, that this water is not fit for drinking or washing. I'm unable to supply this case law... Because, I'm denied access to the law library. But as soon as I'm able to attend the law library I provide that case law.

[I'm gone where the sulfuric dioxide spores is not. I'm need a breathing mask.]

SUGGESTED REMEDY/REMEDIO SUGERIDO: To transfer me to SCCC or issue me bottle water, skin sanitizer, etc.

My present living environment is a death trap. I look out my sulfuric dioxide crystallization window and see so many that is at death doors... For years they allow them to imprison residents, citizens to feed on them. Kill them. And did little to nothing. What... you do in life is your choice. That's if you possess the ability for independent action. But be sure. That if you make or think of conducting an act that will place you in front of a judge - that it's an action that can be resolved without you being place in these concentration camps. Because believe it or not, that's what they are. And in Washington, you're sure to die of some kind of illness. This is something to think about for your new year's resolution. How much do you value your life? Your happiness? Because there others out there that want what you are entitled to. And they are willing to do whatever they must for it.

RANT TO RAVE
Letter to the Media

The reason for me sending you this letter is herein stated. I believe the subject matter of this letter will be of some interest to you.

How inadequate do you think the state and federal judicial system as in the state of Washington?

If you was to say the lack of enforcement state and federal statutes - codes.

The lack of enforcing clear court decision of the legal issue already address by the judicial system in a previous relevant case.

A criminal entity that's heavily embidden in the correctional, judicial, Department of Health, public safety entity in this state government.

This criminal entity conduct acts of sabotage to frustrate the government-judicial system.

What is most of you'll immediate close surrounding environment comprise of?

Are you able to identify the problematic elements that cause you from obtaining your individual balance, determination, ability of perception, comprehension.

If you're unable to ascertain what exactly is or has transpire. Then how are you gone to determine what exactly must you do to live a conscious life.

I WANT TO GRIEVE/QUIERO QUEJARME DE: I was place in (priority) B207 about 10-17-18. The cell is inhabitable. A gas enter into the cell so powerful it restrict my breathing. Strip the air out of the cell. The water is not drinking. The entire back wall panel is structurally unsound. The window cell is completely damaged. The side and top area have several tracks that is covered with rusted, corrosion, and crystallization, sulfur acid, spoor. The pane and wall material had chemical burn from the gas that's comprised with the rest of the element thus make the cell a death trap. On 11-1-18 I spoke with Sgt. Degentize and he respond that he will not move me but put in a work order. I wake up thinking I'm going to die.

SUGGESTED REMEDY/REMEDIO SUGERIDO: I am requesting a cell move to the top floor tier 3 where this problem is not present. An emergency move.

Enemy combatant. It's said he's the son of say inside the governor of Washington. He goes by Stalker. Others know him as Turner. Some know him as Ron Inslee. I know him as one of the terrorist here. Here are the rest - he was behind the last mail rejection from BTB. Danny Riverra, Thomas Smolics, Gendejas, Jordan Dodge that's also go by Dorthy. Strongham, Glyn Bencrofort, Glen, Alvis Hollen, Chris Britton, Thomas Valdez, D Campbell, Ashment, Fuentez, etc, etc. It's troubling knowing that some people is hurt or kill for helping me and me helping them destroy monster that shouldn't exist without me being able to do more to save them.

She... they... appear to me in all their horror. Jaded am I to this way of life that numbness - contemplation are my response.

Restrained by the fears of another's, who only desire freedom as we all every day. I face fear, danger, challenges that's incomprehensible. Injured. In severe pain most of the time. I know I die... at time I can feel it. I accept it. And yet I'm still here. Alive... God raise... then bring me back to Earth. I swallow poison, after stab, cut, repeatedly by fucking monsters who justify their action with deception. I felt the tremor before it hit Alaska. The globe death dice they play with like a video game.