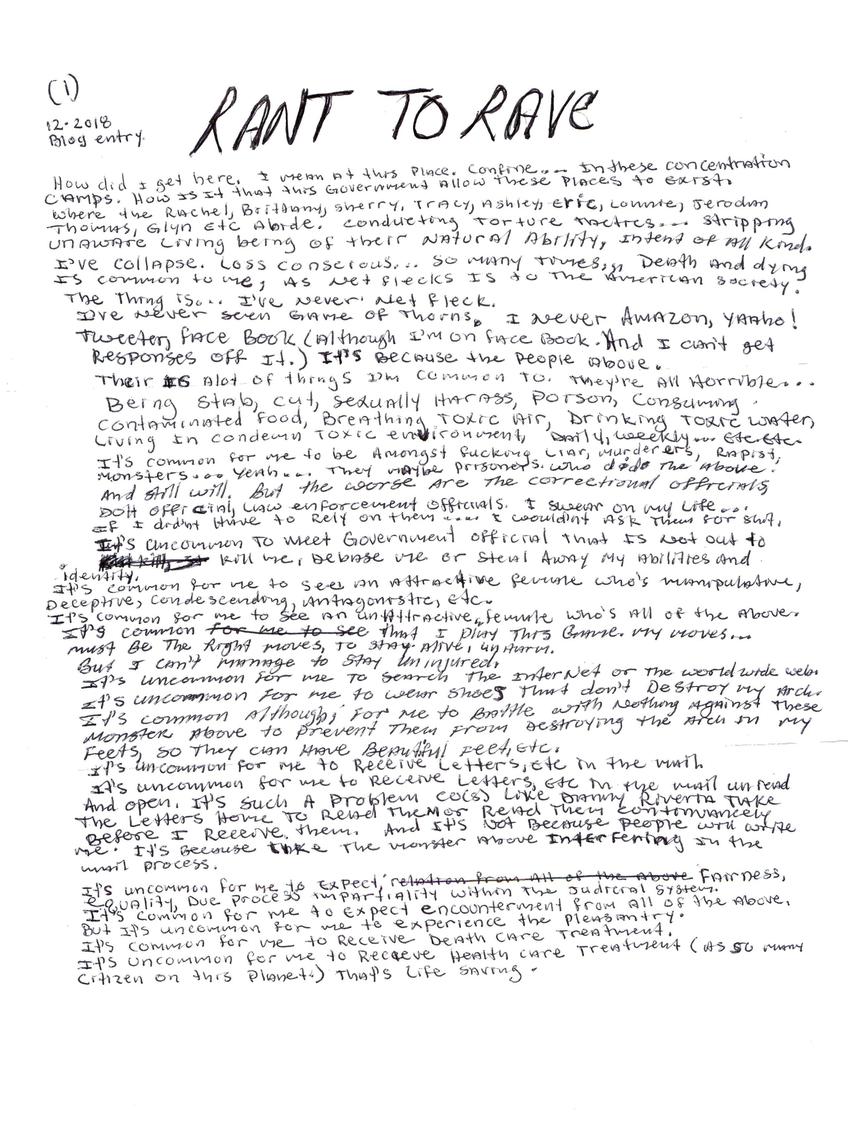 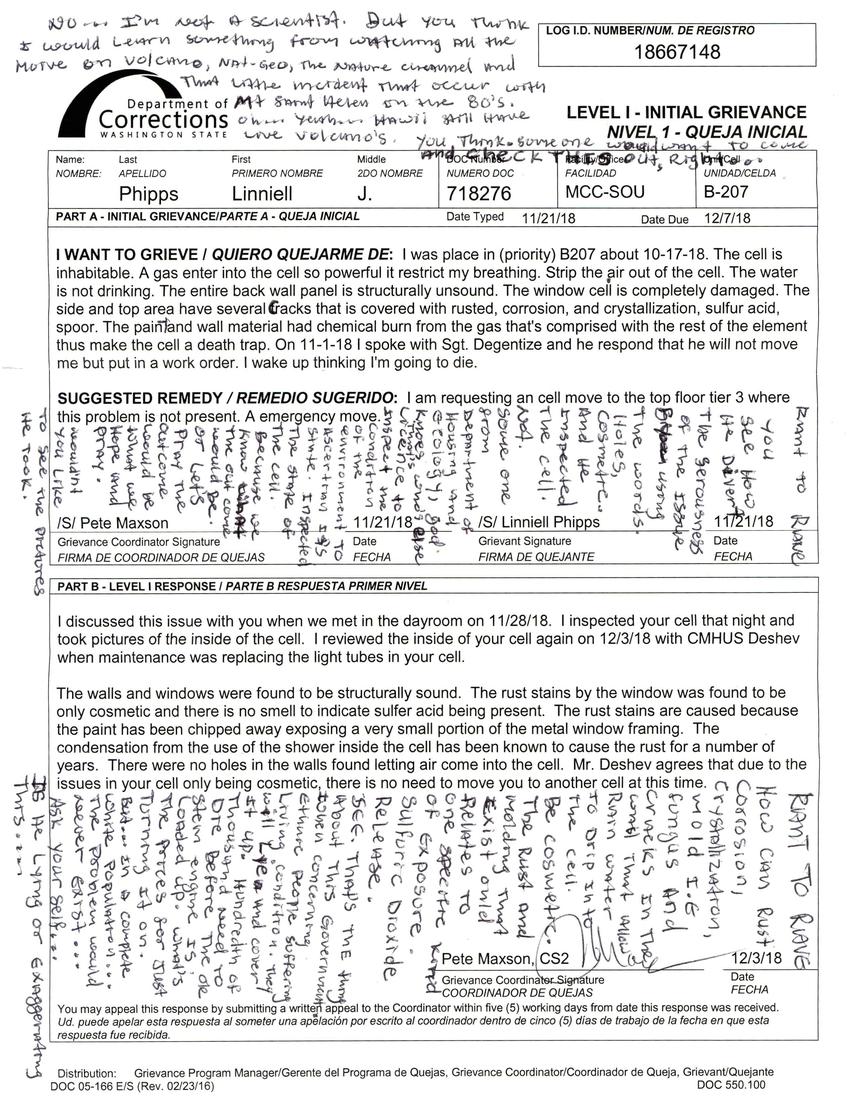 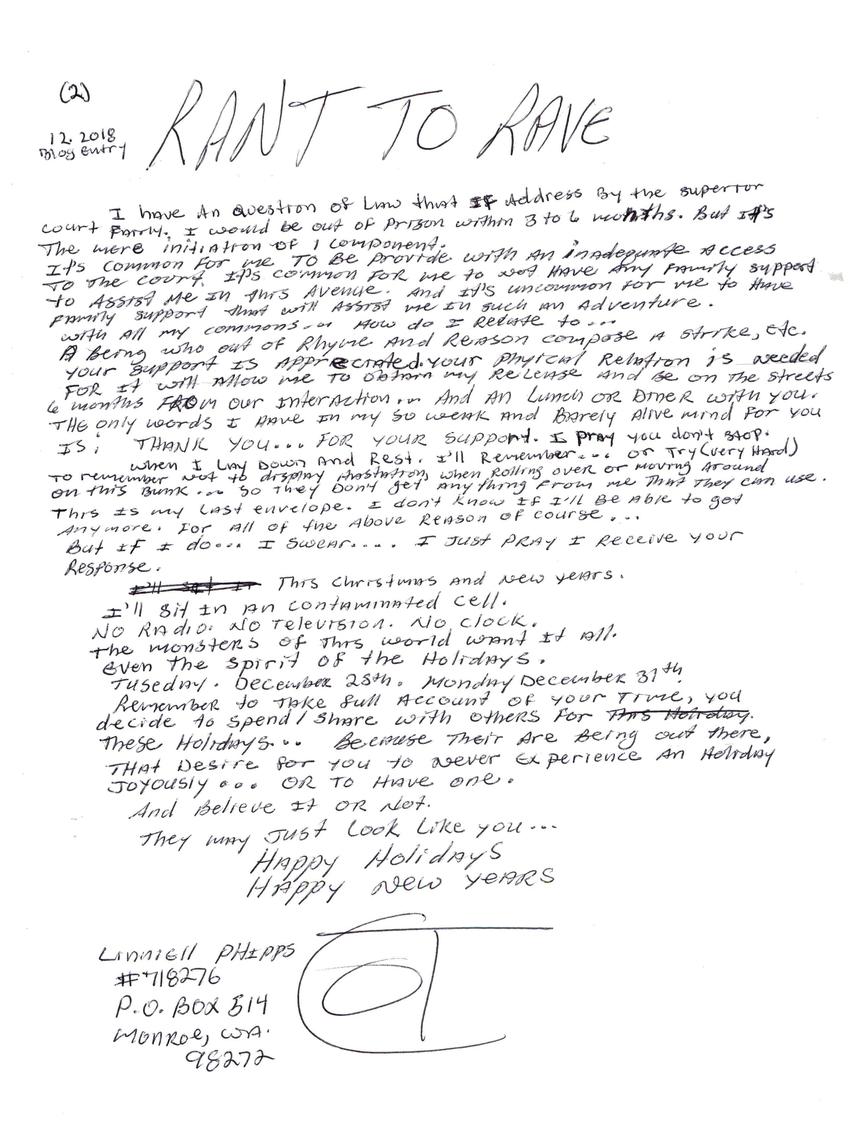 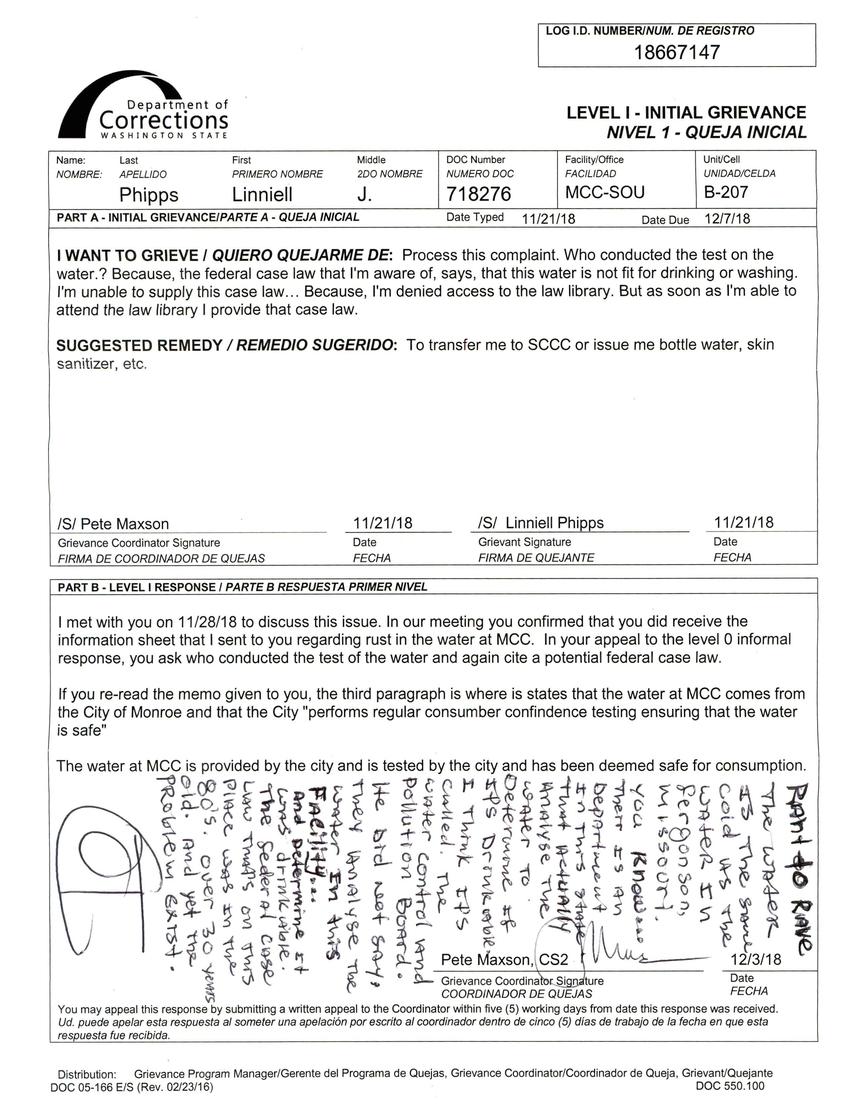 How did I get here. I mean at this place. Confine... In these concentration camps. How is it this government allow these places to exist. Where the Rachel, Brittany, Sherry, Tracy, Ashley, Eric, Lonnie, Jerodan, Thomas, Glyn etc abide. Conducting torture tactics... stripping unaware living being of their natural ability, intent of all kind. I've collapse. Loss conscious... so many times... Death and dying is common to me, as Netflix is to the American society.

The thing is... I've never Netflix.

I've never seen Game of Thrones, I never Amazon, Yahoo!, Twitter, Facebook (although I'm on Facebook. And I can't get responses off it.) It's because the people above.

There is a lot of things I'm common to. They're all horrible... Being stab, cut, sexually harass, poison, consuming contaminated food, breathing toxic air, drinking toxic water, living in condemn toxic environment, daily, weekly... etc etc. It's common for me to be amongst fucking liar, murderers, rapist, monsters... yeah... they may be prisoners who did the above. And still will. But the worse are the correctional officials, DOH official, law enforcement officials. I swear on my life... if I didn't have to rely on them... I wouldn't ask them for shit. It's uncommon to meet government official that is not out to kill me, debase me or steal away my abilities and identity.

It's common for me to see an attractive female who's manipulative, deceptive, condescending, antagonistic, etc.

It's common for me to see an unattractive female who's all of the above. It's common that I play this game. My moves... must be the right moves to stay alive, unharm.

But I can't manage to stay uninjured.

It's uncommon for me to receive letters, etc in the mail.

It's uncommon for me to receive letters, etc in the mail unread and open. It's such a problem CO(s) like Danny Roberts take the letters home to read them or read them continuously before I receive them. And it's not because people will write me. It's because like the monster above interfering in the mail process.

It's uncommon for me to expect fairness, equality, due process impartiality within the judicial system.

It's common for me to receive death care treatment.

It's uncommon for me to receive health care treatment (as so many citizen on this planet) that's life saving.

No... I'm not a scientist. But you think I would learn something from watching all the movie on volcano, Nat-Geo, the Nature channel and that little incident that occur with Mt Saint Helen in the 80's. Oh... yeah... Hawaii still have live volcanoes. You think someone would want to come and check this out, right...

I WANT TO GRIEVE/QUIERO QUEJARME DE: I was place in (priority) B207 about 10-17-18. The cell is inhabitable. A gas enter into the cell so powerful it restrict my breathing. Strip the air out of the cell. The water is not drinking. The entire back wall panel is structurally unsound. The window cell is completely damaged. The side and top area have several cracks that is covered with rusted, corrosion, and crystallization, sulfur acid, spoor. The paint and wall material had chemical burn from the gas that's comprised with the rest of the element thus make the cell a death trap. On 11-1-18 I spoke with Sgt. Degentize and he respond that he will not move me but put in a work order. I wake up thinking I'm going to die.

SUGGESTED REMEDY/REMEDIO SUGERIDO: I am requesting a cell move to the top floor tier 3 where this problem is not present. An emergency move.

You see how he divert the seriousness of the issue using the words holes, cosmetic, and he inspected the cell. Not. Someone from Department of Housing and Ecology, god knows who else that's licence to inspect the condition of the environment to ascertain its state. Inspected the state of the cell. Because we know what the outcome would be. Or let's pray the outcome would be what we hope and pray. Wouldn't you like to see the pictures he took.

PART B - LEVEL I RESPONSE/PARTE B RESPUESTA PRIMER NIVEL

I discussed this issue with you when we met in the dayroom on 11/28/18. I inspected your cell that night and took pictures of the inside of the cell. I reviewed the inside of your cell again on 12/3/18 with CMHUS Deshev when maintenance was replacing the light tubes in your cell.

The walls and windows were found to be structurally sound. The rust stains by the window was found to be only cosmetic and there is no smell to indicate sulfer acid being present. The rust stains are caused because the paint has been chipped away exposing a very small portion of the metal window framing. The condensation from the use of the shower inside the cell has been known to cause the rust for a number of years. There were no holes in the walls found letting air come into the cell. Mr. Deshev agrees that due to the issues in your cell only being cosmetic, there is no need to move you to another cell at this time.

How can rust, corrosion, crystallization, mold i.e. fungus and cracks in the wall that allow rain water to drip into the cell be cosmetic. The rust and molding that exist only relates to one specific kind of exposure. Sulfuric dioxide release. Def. That's the thing about this government when concerning ethnic people suffering living condition. They will lie and cover it up. Hundredth of thousand need to die before the ole stem engine is loaded up. What's the prices for just turning it on. But... in a complete white population... the problem would never exist... Ask yourself... is he lying or exaggerating this...

I have a question of law that if address by the superior court fairly. I would be out of prison within 3 to 6 months. But it's the mere initiation of 1 component.

A being who out of Rhyme and Reason compose a strike, etc. Your support is appreciated. Your physical relation is needed for it will allow me to obtain my release and be on the streets 6 months from our interaction... And a lunch or dinner with you. The only words I have in my so weak and barely alive mind for you is: thank you... for your support. I pray you don't stop.

When I lay down and rest. I'll remember... or try (very hard) to remember not to display avastation, when rolling over or moving around on this bunk... so they don't get anything from me that they can use. This is my last envelope. I don't know if I'll be able to get any more. For all of the above reason of course... but if I do... I swear... I just pray I receive your response.

This Christmas and New Years.

I'll sit in a contaminated cell.

No radio. No television. No clock.

The monsters of this world want it all.

Even the spirit of the holidays.

Remember to take full account of your time, you decide to spend/share with others for these holidays... Because there are being out there, that desire for you to never experience a holiday joyously... or to have one.

And believe it or not.

I WANT TO GRIEVE/QUIERO QUEJARME DE: Process this complaint. Who conducted the test on the water? Because, the federal case law that I'm aware of, says, that this water is not fit for drinking or washing. I'm unable to supply this case law... Because, I'm denied access to the law library. But as soon as I'm able to attend the law library I provide that case law.

SUGGESTED REMEDY/REMEDIO SUGERIDO: To transfer me to SCCC or issue me bottle water, skin sanitizer, etc.

PART B - LEVEL I RESPONSE/PARTE B RESPUESTA PRIMER NIVEL

I met with you on 11/28/18 to discuss this issue. In our meeting you confirmed that you did receive the information sheet that I sent to you regarding rust in the water at MCC. In your appeal to the level 0 informal response, you ask who conducted the test of the water and again cite a potential federal case law.

If you re-read the memo given to you, the third paragraph is where it states that the water at MCC comes from the City of Monroe and that the City "performs regular consumer confidence testing ensuring that the water is safe"